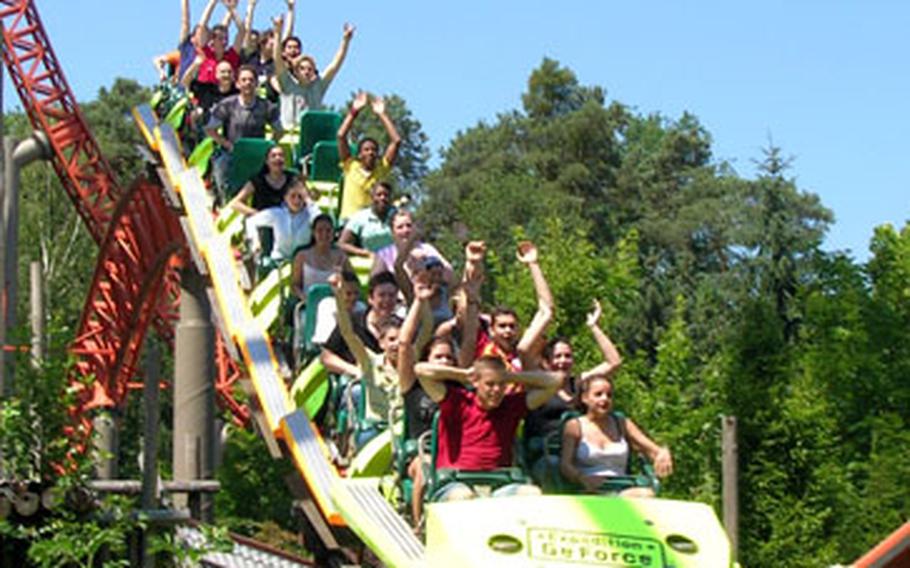 Expedition GeForce at Holiday Park in Hassloch, Germany, reaches speeds of around 75 mph and exerts a G-force of 4.5 on riders. (Steve Mraz / S&S)

Expedition GeForce at Holiday Park in Hassloch, Germany, reaches speeds of around 75 mph and exerts a G-force of 4.5 on riders. (Steve Mraz / S&S) 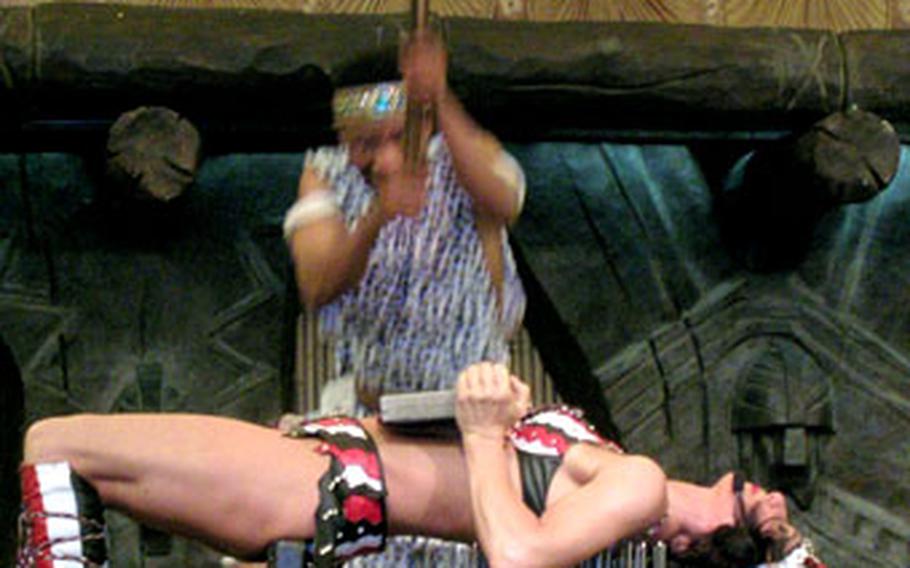 In a less typical amusement-park experience, an assistant in the Crocodile-Diana show prepares to break a concrete block while the female star rests on a bed of nails. (Steve Mraz / S&S) 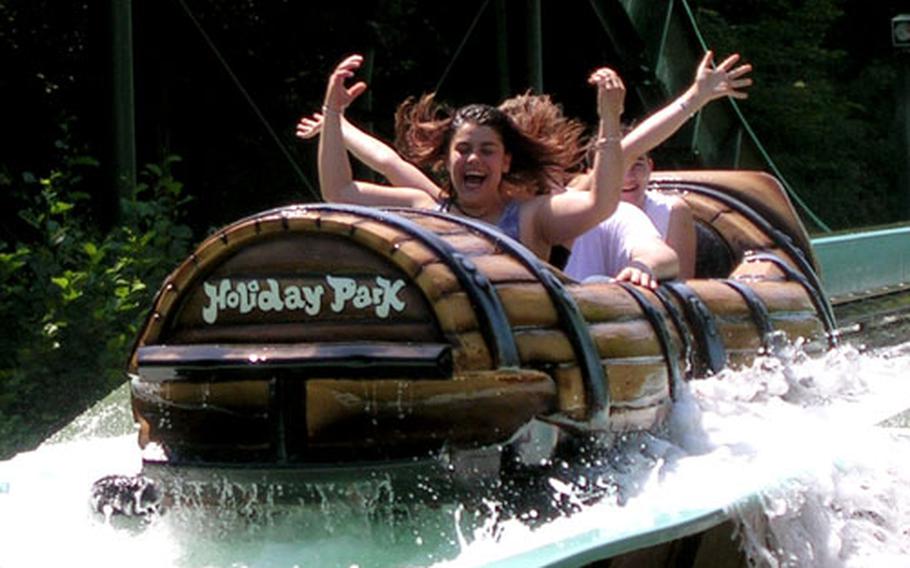 You barrel toward the ground at an 82-degree angle, reach speeds of nearly 75 mph and subject your body to a G-force of 4.5.

And when it ends, all you want to do is do it again.

Welcome to Expedition GeForce, a mind-blowing roller coaster at Holiday Park in Hassloch, Germany. Hassloch, near Mannheim and Speyer, is a short drive from several U.S. military installations, including Ramstein, Heidelberg, Stuttgart, Darmstadt and Mannheim.

Since Expedition GeForce opened in June 2001, it has twice been voted the world&#8217;s best roller coaster by Internet Coaster Poll.

After you take a spin on the one-minute, 15-second ride, you&#8217;ll know why. The remarkably smooth roller coaster never flips you upside down but puts you through some serious drops and turns.

Other thrilling rides at Holiday Park include Superwirbel, a slightly jerky coaster that turns you upside down; Teufelf&#228;sser, a high-speed water ride that will dampen your clothes but not your spirit; and Free Fall Tower, which is pretty much self-explanatory.

For those not game for adrenaline-rushing rides, Holiday Park has plenty of other options. Basically, it&#8217;s like a Six Flags in Germany.

There&#8217;s an area for children with age-appropriate rides, a carousel and a relaxing canal ride.

There are several live stage shows throughout the day. At least one, the &#8220;Crocodile-Diana Show,&#8221; is not for the faint of heart, with the star strutting around with crocodiles, snakes, spiders and scorpions.

However, it is impressive. The star of the show lies on a bed of nails while her assistant swings a sledgehammer to smash a concrete block placed on her stomach. The woman also lies on broken glass while a member of the audience stands on her stomach.

What her strength and pain tolerance have to do with crocodiles, I&#8217;m still trying to figure out. But that being said, her skills are something to behold.

Also, a water ski show is performed during the day in the back corner of the park. A schedule for the day&#8217;s shows is available once you enter Holiday Park.

When you get hungry, make your way to the Pfalzgraf, the main eatery on location. It offers mainly German food in a cafeteria-style setting. Unlike restaurants at stateside theme parks, the food prices at Holiday Park are not outrageous. They are pretty much in line with what you would pay for a similar meal on the economy.

Those looking to save money can always pack a lunch and tote it into the park with a backpack. Because the park allows re-entry, you could also keep lunch in a cooler in your car.

The property is nicely maintained with plenty of flora and fauna to keep you shaded and entertained as you make your way around the park. The bathrooms are spacious, clean and free.

So, if you&#8217;re jonesing for a roller-coaster ride, to see a chunk of concrete broken on a woman&#8217;s stomach or just looking to make the kids happy, check out Holiday Park.

On the QT ...Hassloch is south of Mannheim and west of Speyer just off Autobahn 65, exit 10. After exiting the autobahn, follow road signs to Holiday Park. It&#8217;s about a 10-minute drive to the park once off the autobahn.

COSTS: Admission for guests taller than 55 inches is 23 euros. Guests between 40 and 55 inches or over 60 years of age are charged 19.90 euros for entrance. Admission for children shorter than 40 inches is free. Also, entrance is free on your birthday with proof.

FOOD: The Pfalzgraf is the main restaurant in Holiday Park and offers food in a cafeteria-type setting. A meal costs around 10 euros. Several other food, drink and snack locations are spread throughout the park.

INFORMATION: The park has an impressive Web site with loads of info. Visit www.holidaypark.de for details; there is an English version.