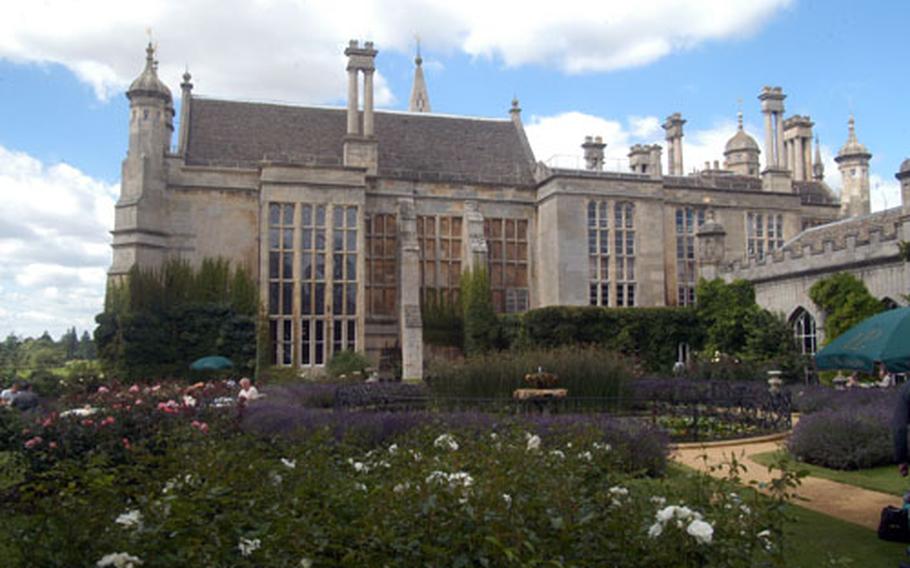 A garden on the grounds at Burghley House in Stamford, England, is used for dining and offers a good view of the house. (Ron Jensen / S&S)

A garden on the grounds at Burghley House in Stamford, England, is used for dining and offers a good view of the house. (Ron Jensen / S&S) 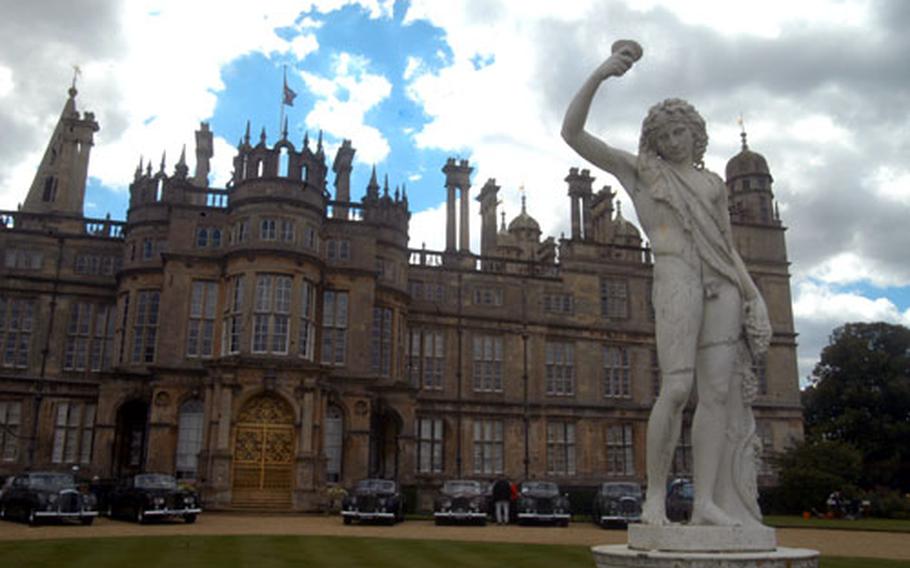 A statue stands in the courtyard of Burghley House, which was built in the mid-16th century by William Cecil and is still in the hands of his family. (Ron Jensen / S&S) The entrance to Burghley House gives a hint of the grandeur inside. (Ron Jensen / S&S)

In the late 17th century, Italian artist Antonio Verrio was hired to paint elaborate scenes on the walls and ceilings of several rooms at Burghley House, which was already more than one century old.

His breathtaking efforts are still on display at the grand home in Stamford, England, lending an other-worldly feel to the structure built in the mid-16th century by William Cecil and still in the hands of his family.

In fact, Verrio is still in residence at Burghley House. Look closely at a scene in the Heaven Room and there is Verrio, sitting near the forge of a Cyclops and looking quite pleased with himself.

Well, why wouldn&#8217;t he want to remain? This is a wonderful house, one of the finest stately homes in England, a country rich with such mementoes of the past.

William Cecil served as lord treasurer for Queen Elizabeth I, who conferred upon him the title Lord Burghley, and the house that he built from 1555 to 1587 is representative of his title.

What we see today is the result of an ambitious restoration begun in 1983 by Lady Victoria Leatham, the descendant of Lord Burghley. She lives with her family on the ground floor and frequently gives lectures at the house.

The loving restoration of Burghley House has improved a present-day visitor&#8217;s enjoyment of it.

The kitchen is the first stop, and it gives a hint of what is to come. The fan-vaulted ceiling holds a lantern &#8212; a chimney of sorts &#8212; that would carry the smoke and steam from the busy kitchen below. The lantern was hidden for many years, but discovered in 1985 as part of the restoration.

From there the stairs lead up to highlight after highlight as the tour goes carefully through the staterooms, including those decorated with the many figures and landscapes painted by Verrio.

Filled with hundreds of paintings besides his magnificent work, the house is an art lover&#8217;s paradise.

The house has seen its share of famous visitors. Queen Elizabeth I visited her lord treasurer, but was prevented from staying inside because of a smallpox outbreak. Queen Victoria, however, was an overnight guest.

At the conclusion of the tour, one wishes he or she could replicate Verrio&#8217;s decision to simply stay at Burghley House and never leave.

No tour of the house is complete without a stop at The George Hotel of Stamford in the center of town outside the gate of Burghley House. In the courtyard out back, knights gathered before setting off on the Crusades to free Jerusalem.

Lord Burghley had the main part of the hotel built after completing Burghley House. Famous visitors include Charles I in 1641 and William III in 1696, as well as members of the current royal family.

The George is a must as part of a visit to Burghley House because it was here that Verrio ate and drank while creating his masterpieces.

On the QTDIRECTIONS: The nearest U.S. base to Burghley House is RAF Alconbury. From there, take A-1 north about 30 miles to Stamford. The town and Burghley House are well- marked on the highway.

The road to the house&#8217;s entrance is in the center of Stamford, also marked

It can be viewed only by guided tours except on Sundays, when guides in each room are available to answer questions.

There is plenty of parking available on the grounds. A gift shop is open during the hours the house is open.

FOOD: The Orangery Restaurant is open from 10 a.m. to 6 p.m. when the house is open. It serves hot and cold meals and a fine Sunday carvery.