Quick Trips: Aquileia — more than a bump in the road 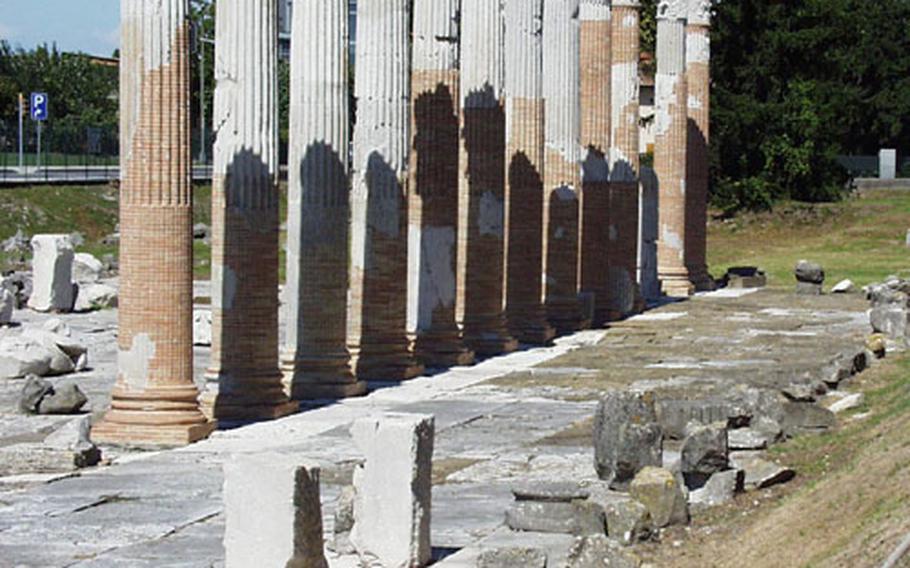 There&#39;s not much left of the Roman Forum in Aquileia, Italy, that would indicate that the area was once home to an important part of the Roman Empire. But Julius Caesar, who spent a winter in the area, could have once leaned against the columns that are still standing. (Kent Harris / S&S)

There&#39;s not much left of the Roman Forum in Aquileia, Italy, that would indicate that the area was once home to an important part of the Roman Empire. But Julius Caesar, who spent a winter in the area, could have once leaned against the columns that are still standing. (Kent Harris / S&S) 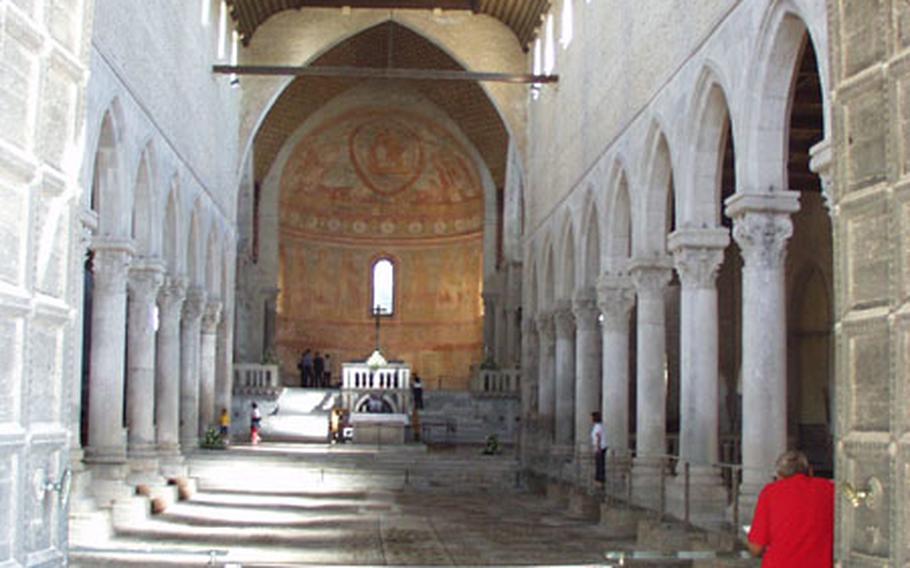 Visitors aren&#39;t allowed to take pictures of the mosaics and frescoes inside the Patriarchal Basilica in Aquileia, Italy. But, thanks to glass walkways, they can see most of the ancient artwork that graces the church. (Kent Harris / S&S) 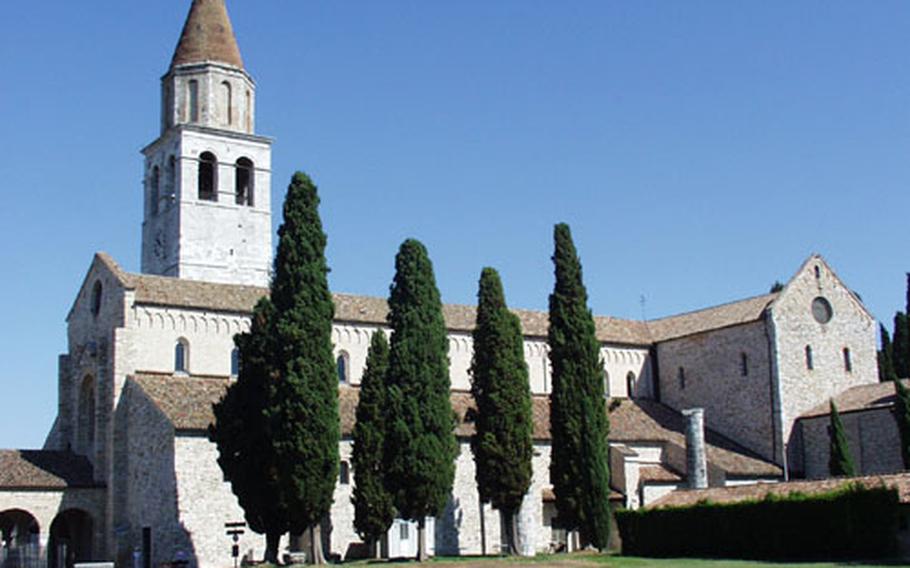 The Patriarchal Basilica in Aquileia, Italy, houses mosaics that date from the fifth century, when Christianity played an important role in the Roman empire. The church also boasts frescoes from the 12th century. (Kent Harris / S&S) 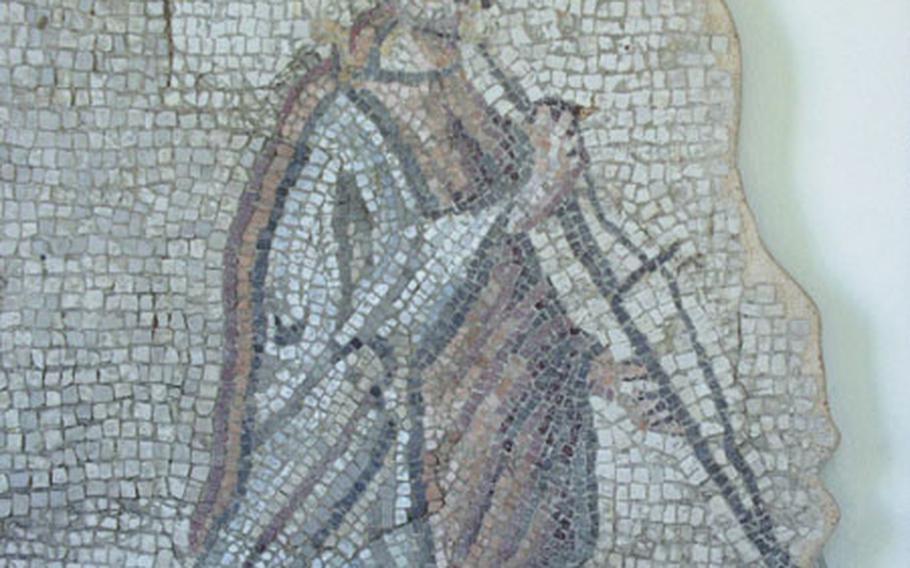 The mosaics on display at the Archaeological Museum in Aquileia, Italy, aren&#39;t as large or colorful as the ones at the Patriarchal Basilica a few blocks away. But if you&#39;re into old stone carvings and large collections of ancient coins and jewelry, it&#39;s a good place to go. (Kent Harris / S&S)

Fortunately, those who like Roman mosaics don&#8217;t have to travel that far. Especially if they&#8217;re stationed in northern Italy.

About an hour&#8217;s drive southeast of Aviano Air Base, some of the finest fourth-century artwork in Europe is on display in Aquileia, a small town that&#8217;s just a bump on a coastal road between Venice and Trieste.

More than 1,500 years ago, though, Aquileia was much more prosperous than its two larger, modern neighbors. In fact, Aquileia was the place to be if you were a Roman citizen who wasn&#8217;t living in the capital. Julius Caesar reportedly spent a winter in the city during his Gaul campaign, 50-some years before the birth of Christ.

Today, there&#8217;s not a lot left to see of those times. The Huns took the city in 452 A.D., largely ending the Roman period. Aquileia later gained some prominence as a seat of religious power. But that&#8217;s also well in the past.

The growing influence of Venice effectively took away whatever Aquileia had going for it in the 1400s.

The area eventually came under the control of countries such as Austria and France, under which archaeological work began. Scholars are still digging in the area today, trying to uncover bits and pieces of the ancient past.

Because of those efforts, there are now several remnants of the Roman era scattered around the city. The most prominent are on the floor of the Patriarchal Basilica.

The church was largely rebuilt in the late 1300s following an earthquake, but the mosaic floor, which was uncovered only in the last 100 years, dates back a lot further. Experts say the work is representative of that done in the early part of the fourth century, when Christianity started to flourish in the Roman Empire.

Several Christian themes are prominent in the artwork, which spans the length of the basilica. The mosaics are covered by glass, which visitors can walk on as they examine the work below.

The church and the two crypt areas may not be photographed. One crypt features colorful frescoes dating from the 12th century and somewhat macabre artifacts partially made of bones. The other displays mosaics that appear more colorful than the ones on the main church floor.

An archaeological museum a few blocks away houses large collections of Roman jewelry, coins and sculpture. Outside, there are more mosaics, sculptures and the remnants of an ancient Roman boat.

A dozen or so columns form what&#8217;s left of the Roman Forum, which &#8212; like everything in Aquileia &#8212; is within easy walking distance of the basilica and museum.

Directions: Aquileia is about 10 miles off Autostrada 4, which runs across the north of the country. Head toward Trieste and take the Grado exit (first one after the interchange for Udine), then follow signs toward Grado or Aquileia. There are a few parking areas along the main road.

Cost: Entrance to the basilica is free, but it costs 2.60 euros to enter both crypts. The adjacent bell tower costs 1.10 euros to climb. Entrance to the archaeological museum is 4 euros; wait for the guards to buzz you in the outside gate. The tourist office hands out some guides and sells others for 6 euros.

Food: There are several restaurants along the main road through town. There&#8217;s also a supermarket and plenty of benches for those interested in picnicking.