The Sasso Caveoso section of the ancient town of Matera is cut into and sits atop a steep ravine, offering a stunning view of the rocky hills and leading to the river at the bottom. (Sandra Jontz / S&S)

The Sasso Caveoso section of the ancient town of Matera is cut into and sits atop a steep ravine, offering a stunning view of the rocky hills and leading to the river at the bottom. (Sandra Jontz / S&S) A cross used in Mel Gibson’s film “The Passion of the Christ” is on display in the Santa Maria de Idris Church in the Sasso Caveoso section of Matera. (Sandra Jontz / S&S) The Sassi district of Matera is a network of dwellings carved into the tufo rocks and limestone of the mountainside, or built on top of the rock and one another. (Sandra Jontz / S&S) 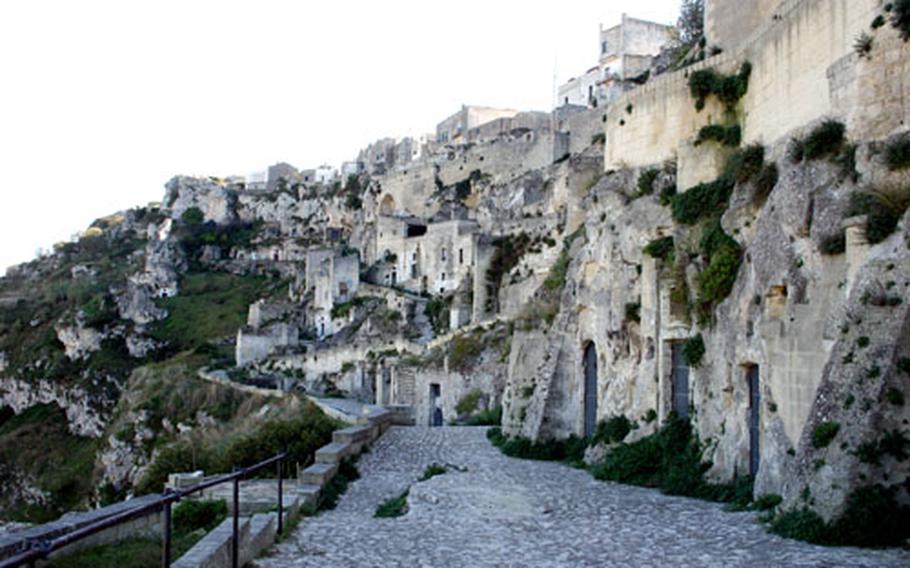 Matera, Italy, is famous as the town Mel Gibson selected to film “The Passion of the Christ.” (Sandra Jontz / S&S) A fresco in the Convicinio di S. Antonio, which is made up of four rock churches dug between the 14th and 15th centuries. (Sandra Jontz / S&S)

Tiny homes, some of which are carved into the Italian mountainside, pepper the town perched 1,315-feet above sea level on the edge of the Gravina ravine.

So ancient that Matera&#8217;s modern-day residents can claim their homes are the same ones in which others lived some 10,000 years ago.

The region in southeastern Italy was once covered by the sea. When the mountain emerged, water had eroded some of the rock, leaving behind naturally formed caves that the people exploited and dug into shelters to serve as their homes, tour guide Savario Di Mauro explained.

Single-room dwellings were carved into the soft tufo rocks and limestone. Up until the 1950s, a colony of about 8,000 troglodytes, with no running water, no electricity and no modern sewage system, lived there, Di Mauro said as he led an hourlong walking tour of the Sasso Caveoso district.

In addition to the homes, he pointed out several churches, one dating to the 10th century, cut into the stone. He also explained how man and animal lived together in the one-room homes.

The government forced inhabitants to relocate, giving families money to build and move into the developing city that is today&#8217;s modern Matera, with a population roughly 60,000 strong, Di Mauro said.

The people of Matera are hardy and resilient, he said, and after several years of refurbishing the Sassi portion of town to accommodate upgrades &#8212; basic power and indoor plumbing &#8212; the zone once again was inhabited. Today, a little more than 4,000 people call the Sassi home.

In 1993, the U.N. Educational, Scientific and Cultural Organization, better known as UNESCO, declared the Sassi a heritage of humanity, leading the way for funding to help preserve the town&#8217;s history and appeal.

While in Matera, a roughly three-hour drive from Naples, visitors also can enjoy a breathtaking view of the ravine on which the dwellings sit, and indulge in some of the local gastronomic specialties, including the popular (and expensive) truffles and cardoncelli mushrooms.

On the QTDIRECTIONS: From Naples, follow Autostrada 3 toward Salerno and Reggio Calabria. Exit at Potenza/ Matera and follow SS 407 to Metaponte. Take the Matera/ Bari exit and follow signs for the town. Once in Matera, follow the brown signs for &#8220;Sassi.&#8221;

TIMES: Tours of the Sassi are offered daily throughout the year, starting at 9 a.m. and ending at 7 p.m., with a break between 1 and 3 for lunch.

COSTS: There are several companies offering tours. Sassi Tourism charged 25 euros each for three people for an hourlong walking tour.

FOOD: There are several restaurants in town, including very touristy restaurants built into the Sassi. If you have the inclination &#8212; and money, try the truffles and cardoncelli mushrooms.