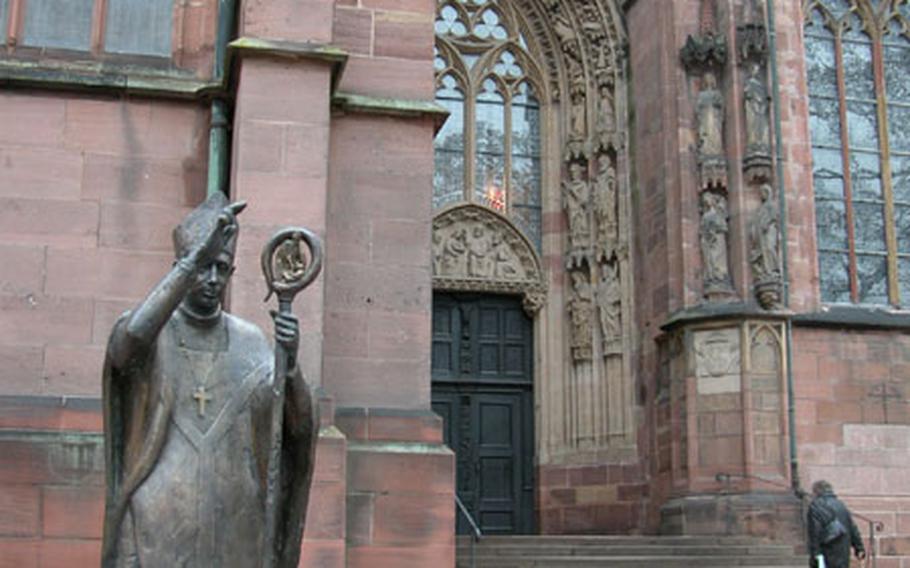 A statue of Bishop Burchard, an 11th-century bishop, stands outside the main entrance to the Worms cathedral, which features elaborate carvings depicting characters and scenes from the Bible. (Charlie Coon / S&S)

A statue of Bishop Burchard, an 11th-century bishop, stands outside the main entrance to the Worms cathedral, which features elaborate carvings depicting characters and scenes from the Bible. (Charlie Coon / S&S) 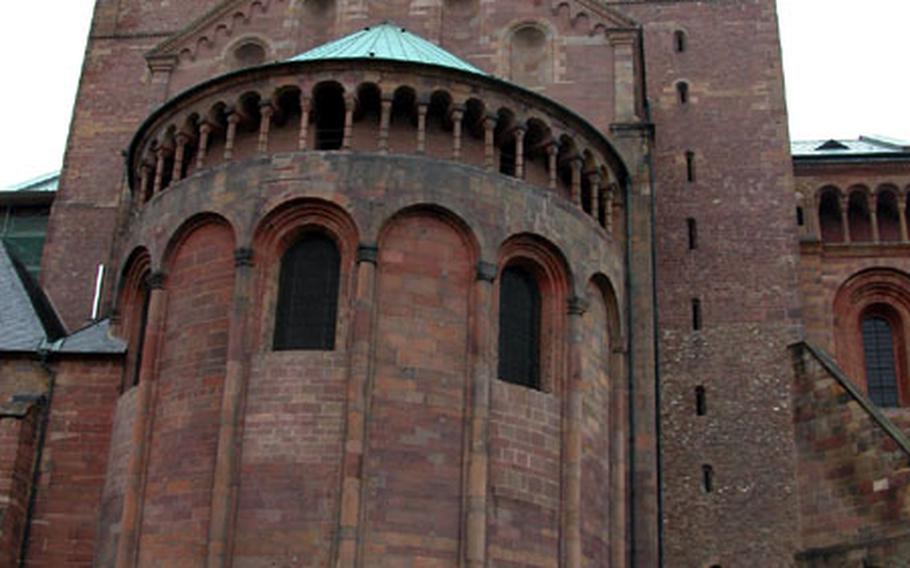 Construction on the Speyer cathedral began in the 11th century. (Charlie Coon / S&S) 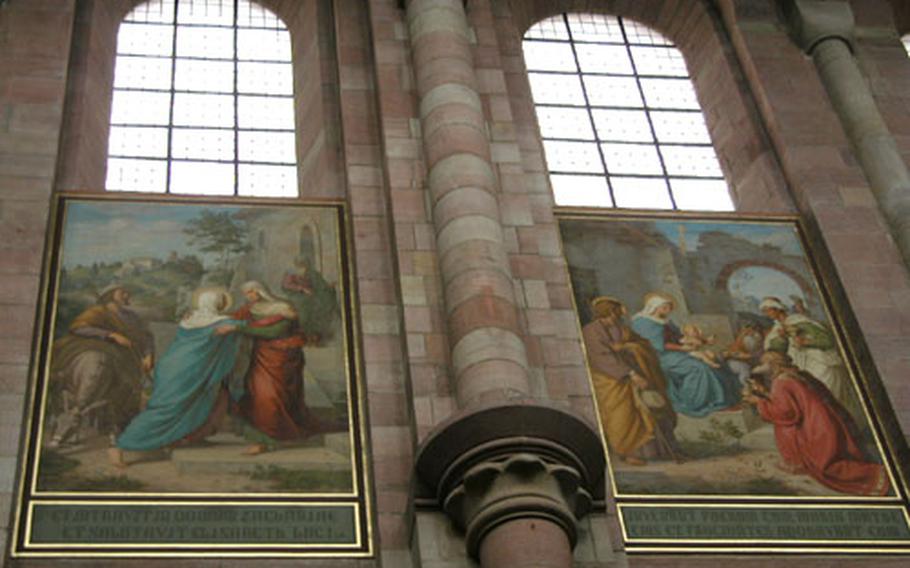 The frescoes that line the upper walls of the Speyer cathedral were painted in the mid-19th century. (Charlie Coon / S&S) 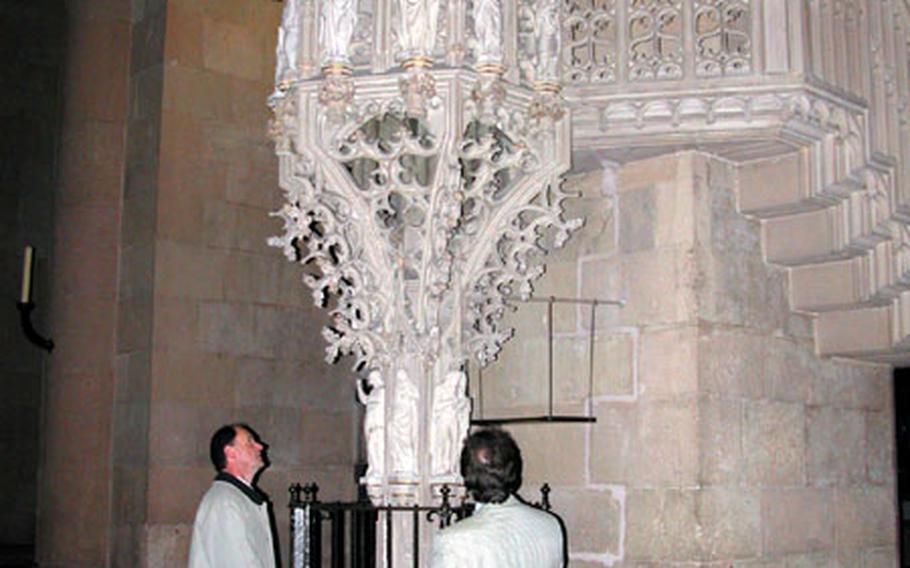 This pulpit inside the massive Mainz cathedral was built in the 15th century and renovated in the 19th century. (Charlie Coon / S&S)

Anyone thinking about going to church might want to try the cathedrals of Speyer, Worms and Mainz.

All three are less than 70 miles apart. All were built for religion, but are monuments to architecture and art. All are in their respective cities&#8217; downtowns, easy to find and within easy walking distance of other attractions.

The three cathedrals each date to the 11th century and have been built up over generations. They have towering arches, opulent altars and lots of history. Below are crypts where leaders of the church and community are entombed.

All three Romanesque cathedrals are in towns along the Rhine River. But each has different settings and its own nuances.

In Speyer, an old imperial town of 45,000 residents that was hardly touched by either world war, there is a lawn on one side of the great church and the old town on the other. In the gardens south of the cathedral is the Domnapf, a stone trough. Historically, when a bishop was enthroned, it was filled with wine and all those who wished to could drink until they dropped.

The cathedral, begun in 1030, is huge but simple and dignified. Its crypt, Germany&#8217;s largest and considered the finest of the Romanesque style, holds the bodies of four Holy Roman emperors and four German kings.

Up the autobahn in Worms, population 75,000, the Cathedral of Sts. Peter and Paul sits amid the hustle and bustle of the business district. The ornate statues and glittery gold leaf design show it was well funded. Its high walls made of stone blocks show that it took muscle and sweat to build.

The cathedral is 358 feet long &#8212; longer than a football field. Balthasar Neumann, the architect who designed some of Germany&#8217;s finest buildings, created the spectacular marble and wood high altar that was built in 1740-1742. It sparkles with gold paint and intricate carvings of angels, the Virgin and other notable subjects.

The cathedral was actually started before the 11th century, in 975. It contains a 600-year-old tapestry and an 800-year-old bishop&#8217;s staff. There are statues, paintings and monuments, including bishops&#8217; tombs.

The oldest slab &#8212; 1249 &#8212; is to Siegfried III von Epstein. The stole and vestments he wears portrays his power in the church. Siegfried is flanked by two kings who are much shorter. He is touching their crowns, indicative of his right to crown them and his power in the secular world.

Artwork in those days was used to tell stories, and it abounds in all three cathedrals.

The Romanesque style refers to the Roman rounded archways, the three doors representing the Holy Trinity, broad bases that allowed for high roofs that reached for the heavens. All are traits of these three buildings.

Just when you begin to wonder if these great structures are still used for religion, a man at Mainz enters and lights a candle. A woman shuffles into a pew and kneels to pray.

The cathedrals are open to visitors every day.

Directions: All three cathedrals can be reached by taking Autobahn 61, Route 9 or a combination of the two. They are in the city centers; just follow the signs directing you to &#8220;Dom&#8221; (cathedral) or &#8220;Zentrum&#8221; (city center). Parking is available near each cathedral.

Cost: Admission is free. Tour books are available at each cathedral for about 3 euros each.

Food: There is a wide variety of restaurants within walking distance of all the cathedrals.