A jovial priest and some worshippers gather for a church service in this scene from the Santon Museum. (Photos by Leah Larkin/S&S)

A jovial priest and some worshippers gather for a church service in this scene from the Santon Museum. (Photos by Leah Larkin/S&S) A shop in Fontaine de Vaucluse, France, features shelves filled with handmade “santon” figures engaged in a variety of occupations. () 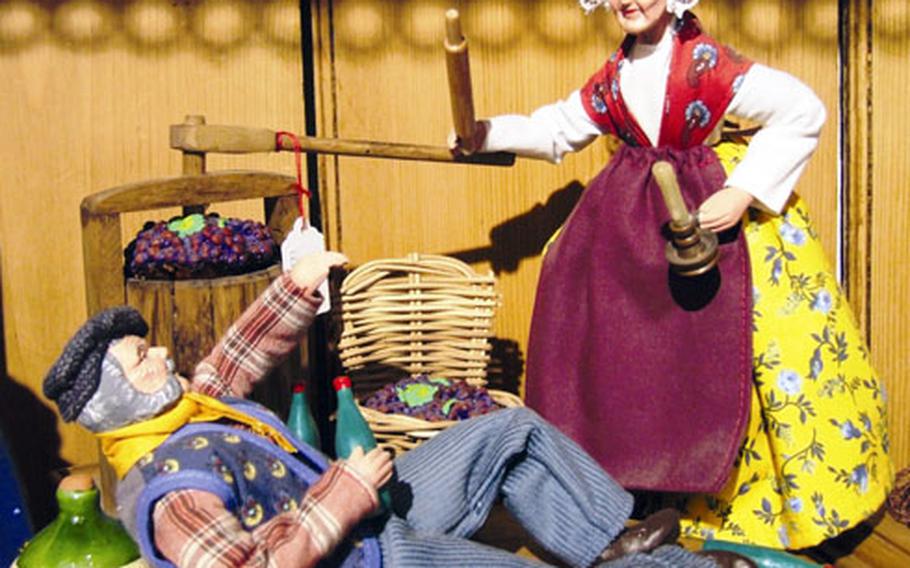 In this scene, a gentlemen who has had too much to drink is confronted by his wife, a candle in one hand and a rolling pin in the other. () 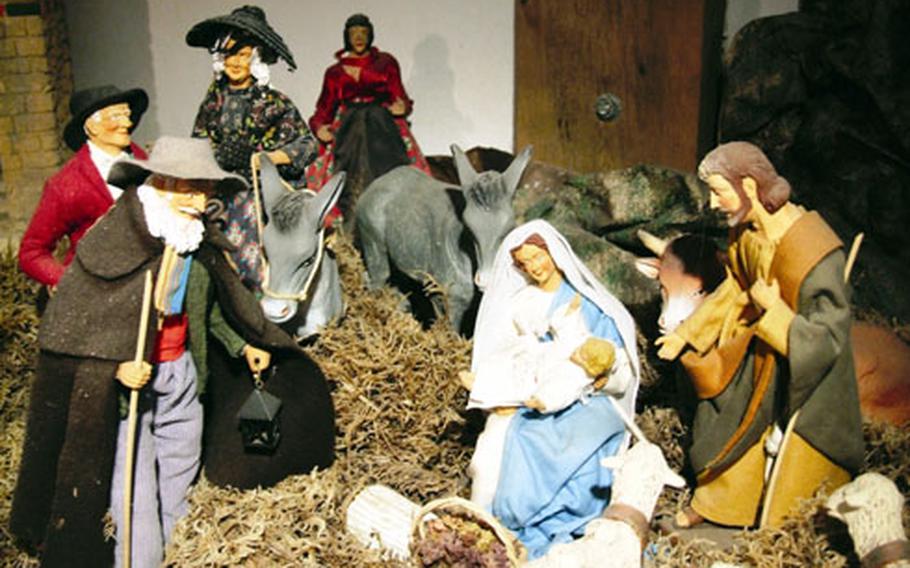 If it&rsquo;s December, it must be planting time in southern France.

Dec. 4, the feast of Sainte Barbe, marks the official beginning of the Christmas season in Provence. It&rsquo;s the day to scatter grains of wheat in a saucer covered with moistened cotton. The grains are diligently watered every day. By Christmas, they should have sprouted, producing a dish of lush green shoots that foretell a bountiful harvest for the coming year. If the grains rot, however, the harvest will be poor.

The wheat tradition honoring Sainte Barbe, the patron of miners and firefighters, is just one of many unusual Christmas customs in this part of France.

The Italians are thought to be the originators of the Christmas cr&egrave;che. The custom was copied in Provence in the 12th century when parts of it were ruled by Italy. Back then, it was mainly the churches that set up nativity scenes, but when churches were closed during the French Revolution, citizens secretly made their own cr&egrave;che figures of papier-m&acirc;ch&eacute; or bread crumbs and created nativity scenes at home.

Through the years the scenes in Provence cribs became more elaborate, the figures more numerous. Today, in addition to the baby Jesus, Mary, Joseph, shepherds, the Three Kings and animals, a santon crib can be a mini-reconstruction of a Proven&ccedil;al village with a baker, butcher, fish monger, doctor, even men playing boule (Provence bowling), in addition to houses, barns, shops and streams. There will not, however, be a cat. According to legend the cat is associated with witchcraft and was banned from the cr&egrave;che by St. Francis of Assisi.

At the Santon Museum in Fontaine de Vaucluse, some 2,000 santons and 60 cr&egrave;ches and Proven&ccedil;al scenes are on display year round. The smallest features 39 tiny santons in a walnut shell.

The collection includes santons made of terra cotta, wood, wax and bread crumbs. Some of the figures move &mdash; a baker shoving bread into an oven, a woman spinning yarn, another doing laundry.

In the pre-Christmas season, many villages in Provence host santon markets with vendors offering an extensive range of village characters in a variety of sizes and prices. One shop in Fontaine de Vaucluse has shelf after shelf of santons, with prices ranging from 11.60 euros to 4,000 euros for handmade pieces.

For many in France, the Christmas Eve meal outranks that served on Christmas Day. In Provence, it&rsquo;s known as the gros souper, or big supper, served before midnight mass. The dinner table is covered with three white tablecloths to symbolize the Trinity. There may also be three white candles, but never any mistletoe in the Provence home, as it is said to bring bad luck.

While many families have adapted their own holiday meal customs, the traditional Christmas Eve meal in Provence consists of lean dishes &mdash; fish, shellfish, a wide range of vegetables, but never meat &mdash; always followed by 13 desserts. Even those who buck tradition and serve turkey, which has become popular in recent years, adhere to the 13-dessert custom.

The desserts symbolize Christ and the 12 apostles and are served after midnight mass.

Dates, figs, raisins, hazelnuts, almonds, nougat, fresh and crystallized fruit and fougasse (a type of flat bread) are among the dessert selections and are accompanied by a sweet wine.

An ancient tradition called Cacho-fio may precede the meal. It involves the lighting of the yule log, which should be from a fruit tree. The youngest and oldest members of the family carry the log to the fireplace and pour mulled wine over it three times before it is lit. It then must burn for three days. This custom is said to be the inspiration for the B&uuml;che de Noel, the cream-filled cake in the shape of a log that pastry shops sell during the holidays.

Even those who don&rsquo;t normally go to church may attend midnight mass, where another ritual takes place: the pastrage. Shepherds follow musicians and present a live lamb to the priest as an offering. The lamb is not harmed.

Some churches also stage the pastorale, a theatrical representation of the nativity sung and spoken in the Proven&ccedil;al dialect by costumed participants.

Photojournalist Leah Larkin is a member of the Society of American Travel Writers and lives in Provence, France. Contact her through www.leahlarkin.com.