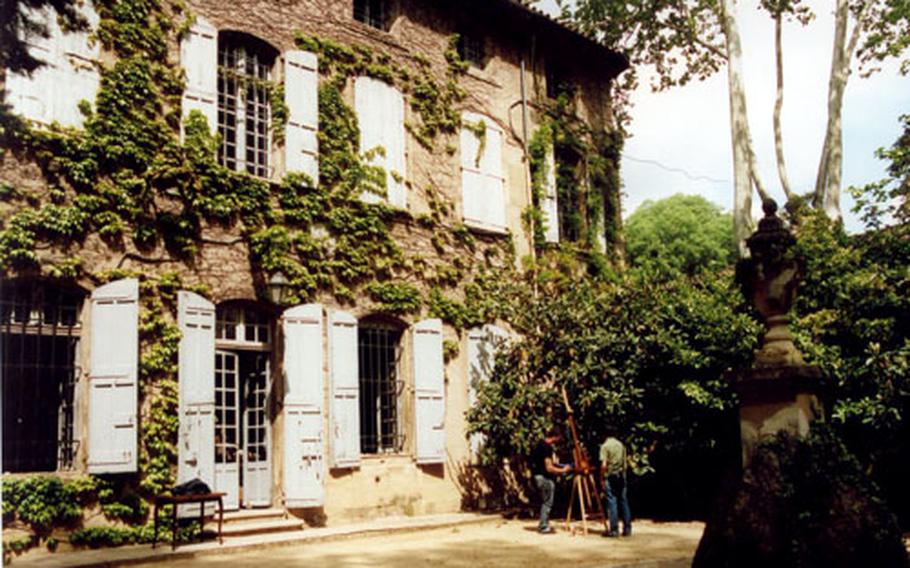 The house at Jas de Bouffan was purchased by Cézanne’s father in 1859. The artist decorated many walls of the rooms, but the paintings have been removed and are now in private collections. (Leah Larkin / Special to S&S)

The house at Jas de Bouffan was purchased by Cézanne’s father in 1859. The artist decorated many walls of the rooms, but the paintings have been removed and are now in private collections. (Leah Larkin / Special to S&S) 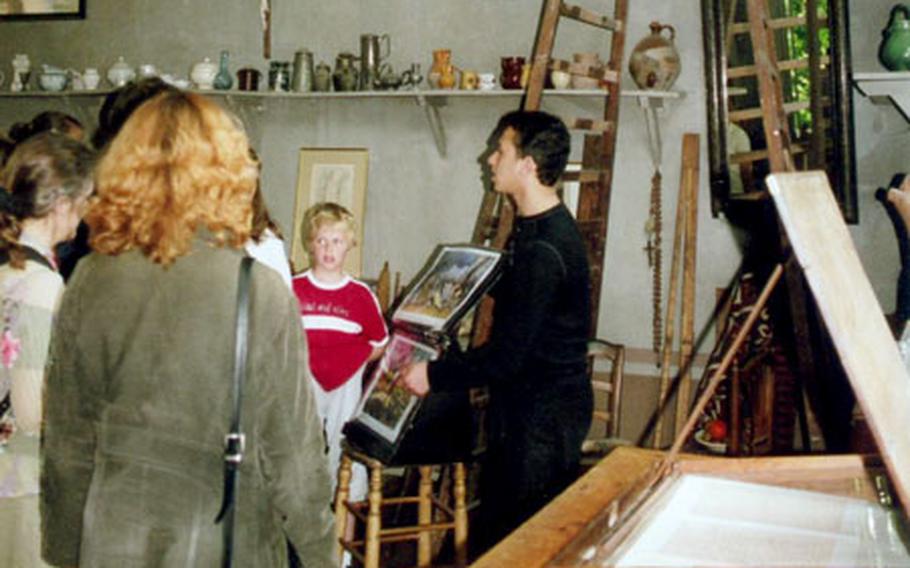 A guide at Cézanne’s studio shows copies of works the artist produced while working in this room. The studio is one of three sites open to the public in connection with the 100th anniversary of Cézanne’s death. (Leah Larkin / Special to S&S) 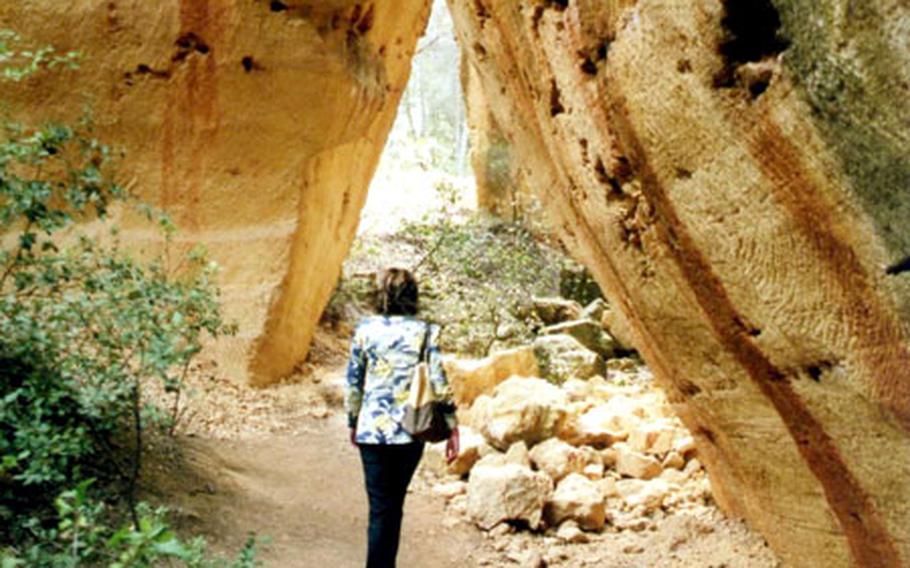 A tour through the quarry at Bibémus is an adventure into a wilderness of cliffs and gorges in varying shades of yellow, orange and beige. The stone was a favorite with architects and a frequent subject of Cézanne’s paintings. (Leah Larkin / Special to S&S)

When Impressionist artist Paul C&eacute;zanne died in Aix-en- Provence 100 years ago, the locals hardly mourned. But now Aix is capitalizing on his death with a special exhibition of his works, as well as opening venues where he lived and worked.

C&eacute;zanne was born in Aix in 1839, the son of a successful hat maker who would later venture into banking. As a college student in Aix, he became friends with classmate Emile Zola, who would later become a famous novelist. They roamed the Aix countryside together and were voracious readers of poetry. Zola left for Paris in 1858, an event that shattered C&eacute;zanne, but they maintained a long correspondence.

Adhering to his father&rsquo;s wishes, C&eacute;zanne enrolled in law school in 1859, but also took art classes. He was more interested in the latter and moved to Paris in 1861, where he hoped to enter the &Eacute;cole des Beaux Arts (fine arts school), but failed the entrance exam. By then his father had bought a bank, so he returned to Aix and went to work for Dad.

The senior C&eacute;zanne finally realized that his son wanted to be a painter, and gave him an allowance so he could pursue his vocation. The budding artist returned to Paris, where he joined up with Pissaro, Monet and Renoir, and met Hortense Figuet, with whom he lived for 17 years before marrying her. They had one son.

Despite his links to other artists, his paintings were refused by the jury of the Paris Salon. &ldquo;I am a shy person, a bohemian, people laugh at me. I have no power of endurance. Isolation, that&rsquo;s what I deserve. At least that way I don&rsquo;t get buttonholed by people,&rdquo; C&eacute;zanne wrote of himself.

C&eacute;zanne frequently returned to Aix to work. He was fascinated by the limestone mountain, Sainte-Victoire, which dominates the Aix landscape, and the quarry at Bib&eacute;mus, outside the city. He enjoyed setting up his easel in the countryside and often painted both the quarry and mountain.

It was while painting in the wilderness that C&eacute;zanne was caught in a thunderstorm and fell. Because he always painted alone, it was several hours before a villager found him. He developed pneumonia and died at age 67 on Oct. 23, 1906.

To retrace his life in Aix, the city tourist office has published a brochure, &ldquo;In the Steps of C&eacute;zanne&rsquo;s Aix-en-Provence.&rdquo; Studs imbedded in the sidewalk mark C&eacute;zanne sites and the brochure provides accompanying explanations. Schools he attended, cafes he frequented and homes of his family are among the places mentioned.

The big event this summer is the exhibition &ldquo;C&eacute;zanne en Provence,&rdquo; through Sept. 17 at the city&rsquo;s Granet Museum. Back in C&eacute;zanne&rsquo;s day, the museum&rsquo;s then-director, Henri Pontier, said that as long as he lived no works of C&eacute;zanne would be hung in the museum.

At that time, the locals considered his works scandalous because of his bold use of color. Now they&rsquo;re in the spotlight in the Granet exhibit, previously shown at the National Gallery of Art in Washington, D.C. On display are 84 oils and 32 watercolors.

For more C&eacute;zanne, venture outside the city center. Le Jas de Bouffan, an 18th-century Provence country home that belonged to the C&eacute;zanne family for some 40 years, is open to the public for the first time. The property, in a park of giant chestnut trees with a pond, fountains and gardens, is idyllic. C&eacute;zanne was inspired to produce 41 paintings, 15 watercolors and 17 drawings while there.

C&eacute;zanne&rsquo;s studio at Les Lauves, a nearby section of the city, also is open to visitors. It&rsquo;s in a shady, tranquil garden. The huge room with a soaring ceiling where C&eacute;zanne worked contains many of the still-life objects he used, including three skulls, and the giant easel he used to paint his masterpiece, the &ldquo;Large Bathers.&rdquo;

C&eacute;zanne, a solitary soul, worked alone and allowed no one in the studio. Art for him was therapy, almost a religious experience.

The third C&eacute;zanne site, and the best, is Bib&eacute;mus, the quarry the artist captured on canvas numerous times. It used to be a park where the locals could wander freely and admire the cliffs and gorges of the ochre-colored stone C&eacute;zanne loved. Now there is an entry fee and visitors must go with a guide along paths, many on wooden planks, that lead to places where the artist painted.

In some areas are platforms with a replica of a C&eacute;zanne painting mounted on the floor of the spot where he produced the work. Even those not especially enamored of C&eacute;zanne would enjoy a tour through this wildly beautiful area with its views of the Sainte Victoire mountain.