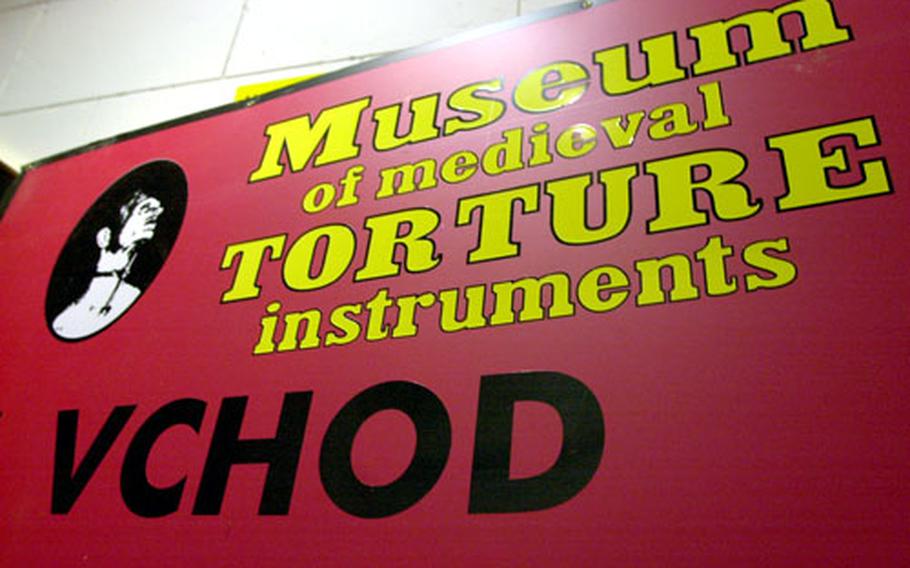 There are some scary things inside the Museum of Medieval Torture Instruments in Prague. (Seth Robson / S&S)

There are some scary things inside the Museum of Medieval Torture Instruments in Prague. (Seth Robson / S&S) The interrogation seat was not a nice place to sit. Torturers used to make victims placed in the seat feel even worse by striking their limbs or using pliers and other instruments to twist body parts and increase suffering. It is one of the items on display at the museum. (Seth Robson / S&S) Victims of medieval justice were often forced to wear gowns like this one, painted with demonic symbols. It is one of the items on display at the museum. (Seth Robson / S&S) The Iron Maiden was a sarcophagus fitted with spikes designed to pierce the body of a victim shut inside it but miss vital organs. (Seth Robson / S&S)

Visitors to the Museum of Medieval Torture Instruments in Prague can check out some of the most gruesome instruments of pain devised by man.

And if you don&rsquo;t get your fill of torment there, the streets of the Czech Republic capital offer plenty of chances to experience a modern form of torture &mdash; gift shopping. In fact, many of the instruments of pain found at the museum have some rather painful &mdash; or at least annoying &mdash; counterparts in souvenir shops. Some examples:

&para; The Iron Maiden: The pi&egrave;ce de r&eacute;sistance of the torture museum, this is a sarcophagus fitted with spikes designed to pierce the body but miss the vital organs of a victim who has been shut inside. Operators wanted to make sure the person trapped inside went through long, agonizing suffering.

Its modern equivalent &mdash; the Russian nesting doll &mdash; can be viewed in all its grotesque manifestations in virtually every gift shop in downtown Prague. They feature increasingly smaller versions of the outside doll. Strangely, their creators have yet to devise an Iron Maiden nesting doll with metal spikes inside.

&para; The Head Crusher: Another nasty instrument on display at the torture museum. The victim&rsquo;s chin was placed on a wooden or iron support and the instrument&rsquo;s cap was screwed down on his or her head.

&ldquo;First the victim&rsquo;s teeth and jawbone would be crushed and eventually, as the pressure increased, his brain tissue would actually start to come out of his skull. In certain Latin American countries a similar device is still used,&rdquo; reads a sign at the museum.

These days, tourists&rsquo; heads are not crushed. Instead they are wrapped in fake fur hats that the Czech Republic&rsquo;s new entrepreneurs have stamped, ironically, with Soviet-style hammer-and- sickle badges.

Many of the devices in the torture museum are items of weird clothing designed to humiliate the victim. Such as:

&para; The Iron Shoe, invented in Austria at the end of the 17th century, was operated by a screw that could shorten the shoe according to the gravity of the crime. The culprit was obliged to walk along the streets of his town with a bell to let people know that a public punishment was in progress, a sign at the museum says.

The Frocks of Penance on display at the torture museum are macabre robes once worn as punishment for small violations or by people condemned to death. The frocks were often adorned with demoniac scenes or inscribed with the crimes committed.

The modern parallel are gift-shop T-shirts with pictures of old buildings stamped on them.

Another item of clothing torture victims were forced to wear was the Mask of Infamy &mdash; a bizarre headdress that sometimes resembled a pig&rsquo;s head or a devil.

Perhaps its modern equivalent would be one of the gift shops&rsquo; most popular items &mdash; the clownlike multicolored knitted hat with ear-flaps like the singer from the Spin Doctors was once fond of.

The Noisemaker&rsquo;s Fife was used for minor offenses like arguing, disturbing the peace and swearing. It was put around the neck of the &ldquo;criminal&rdquo; for varying lengths of time with their fingers locked in a special vice. It was also used to punish &ldquo;bad musicians&rdquo; whose music offended nobles&rsquo; ears, a sign says.

The guy who was rubbing the rims of glasses full of water to make musical sounds on the Charles Bridge is lucky the Noisemaker&rsquo;s Fife is no longer used.

Medieval torture was often punishment for some religious indiscretion.

For example, the Fork of the Heretic, was a spiked metal collar placed on people accused of heresy and witchcraft.

Prague&rsquo;s gift shops offer a million ways to punish the unbeliever. Perhaps the most fiendish is a gaudy, gold, religious figurine.

A full description of the various torture devices collected in the museum would fill a complete edition of Travel. Be thankful that such hands-on torture has largely been eliminated from the Free World&rsquo;s justice systems.

But for those of us who find shopping the ultimate form of torture, the future looks dark.

If you go ...Directions: Prague is about a 2&frac12;-hour drive from Army bases in southeastern Germany, including Grafenw&ouml;hr, Vilseck and Hohenfels. Take Autobahn 93 to Autobahn 6, then change to D5/E50 at the border and follow the signs to Prague.

The speed limit on Czech freeways is 130 kilometers per hour and you must buy a pass to use them at the the border. You will also have to show a passport.

The museum: The Museum of Medieval Torture Instruments is 30 yards from the Charles Bridge in downtown Prague. It is open 10 a.m. to 10 p.m. daily. Entrance is 200 koruna, about $8.25, for adults.

The museum does not have a Web site but lots of information about medieval torture is available at www.torturemuseum.com.