Portsmouth: Dockyard exhibits tell many stories from the deep 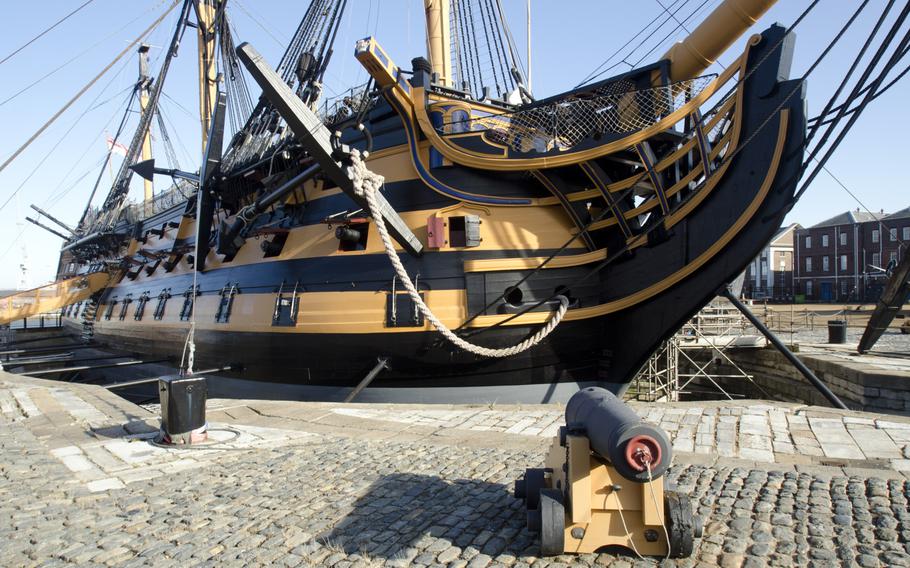 The remains of the Mary Rose, which sank in the 1500s near the English coast, have been preserved and are on display at the Portsmouth Historic Dockyard, England. The ship was commissioned by King Henry VIII and sank in a battle against the French. (Adam L. Mathis/Stars and Stripes) The skull of a man identified as a "wealthy officer" sits on display at the museum for the Mary Rose at the Portsmouth Historic Dockyard, England. The ship, which sank about 500 years ago, was raised in the 1900s. (Adam L. Mathis/Stars and Stripes) 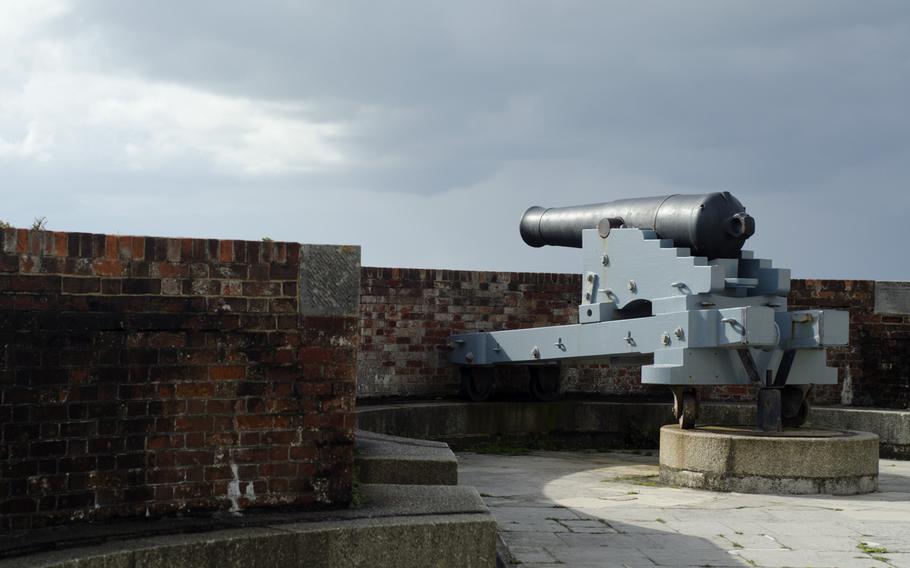 A cannon points out from Southsea Castle in Portsmouth, England. The castle was originally constructed by King Henry VIII as part of a massive defense overhaul and was later used as a defensive position for the British during the two world wars. (Adam L. Mathis/Stars and Stripes)

Long rows of ancient wood stretched away from the glass wall of the elevator, proof that history, like life, takes effort.

Much of the wood is gone, dissolved by the HMS Mary Rose’s more than 400 years at the bottom of the English Channel, but the work of experts has preserved a surprising amount of the ship’s form. Decks are still visible, held by beams that would have formed the ceiling for lower decks. The wood is still a vibrant brown, tinged and blemished in spots by an artificial white.

Portsmouth, as its name suggests, has long been connected to the sea, and the modern town wants to capitalize on that history to entice tourists. But preserving a history that involves swimming for 400 years in the universal solvent is not easy, as the Mary Rose proves. For 20 years, conservationists sprayed the ship’s wood with a preservative similar to wax, which accounts for the splotches of white, to keep it solid after the ship was lifted from its home on the bottom of the English Channel. Now the wood is in the midst of a four-year drying process.

Despite how tedious a more than 20-year preservation process must have been, the Portsmouth Historic Dockyard created compelling and intriguing museum displays. The Mary Rose exhibit shows the contents of individual footlockers filled with dice, religious books and other personal items that went down when the ship was sunk in a battle with the French. One man had a series of folding grooming tools, all hinged on one side, and the museum likens it to the modern Swiss Army knife. A wealthy man on the ship lost a pocket sundial, complete with miniature compass.

Perhaps an easier piece of history to preserve is the nearby HMS Victory. Built in the 1700s, the ship saw action at the Battle of Trafalgar, where Napoleon’s navy was defeated. Though the ship is obviously maintained — the coats of paint are clearly not from the 1700s — the ship is also deteriorating. It was reported in 2011 that the ship was coming apart under its own weight in dry dock, despite more than 1.5 million British pounds a year (more than $2 million) being spent on maintenance.

The maintenance has allowed the ship to stay open to the public, offering an insightful tour of sailing life centuries ago. Plaques on the gun decks describe the recoil of the cannons when they fired, placing about 10 tons of force on the ship. The kitchen, equipped with a massive stove, was manned by an officer since the responsibility of maintaining such a large fire was considered vitally important on a wooden ship. Prisoners on this ship were not housed in cells but cuffed to a bar that was bolted to the floor of the ship. The prisoners were left to stand or sit as best they could.

To give a little bit of context to the history of the ships, head to the nearby Southsea Castle. The castle overlooks the spot where the Mary Rose sank. The castle has little complexity, consisting of walks along the walls, a tour of a tunnel and a simple keep. The displays offer information about the time of King Henry VIII, who commissioned the Mary Rose and the castle, and broad views of the city’s coastline.

Times: Excluding a few holidays, the dockyard opens every day of the year at 10 a.m. and closes at 5:30 p.m. November through March and at 6 p.m. during the remaining months.

Costs: Tickets: 21 British pounds (about $32) for one adult for access to all exhibits. The ticket is good for entry for a year. Parking is not included.

Food: The dockyard has a coffee shop, tea room and restaurant.