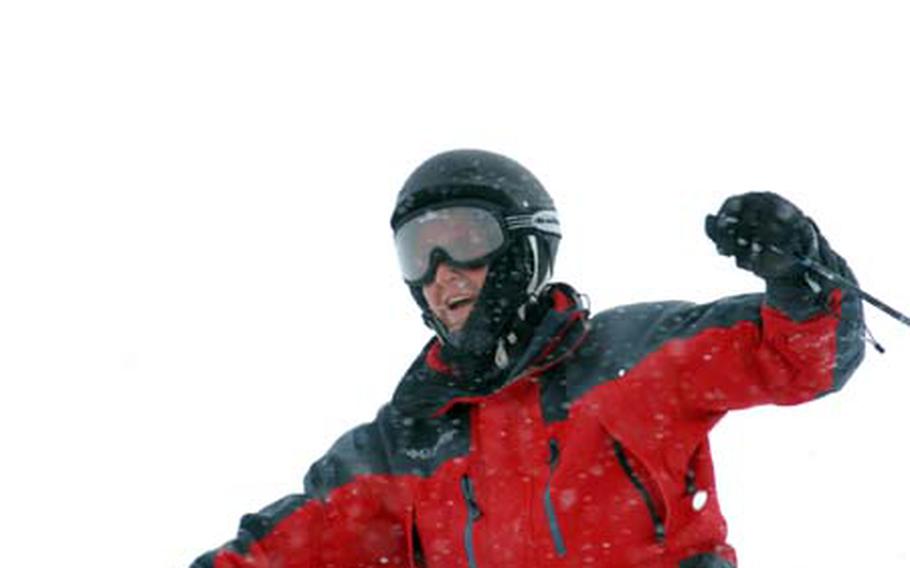 Tannenbaum Ski Club member John Hereford negotiates the "Wall of Death" at Champery in February. Hereford called the run "probably the most extreme terrain I have skied in Europe." (Seth Robson / S&S)

Tannenbaum Ski Club member John Hereford negotiates the "Wall of Death" at Champery in February. Hereford called the run "probably the most extreme terrain I have skied in Europe." (Seth Robson / S&S) 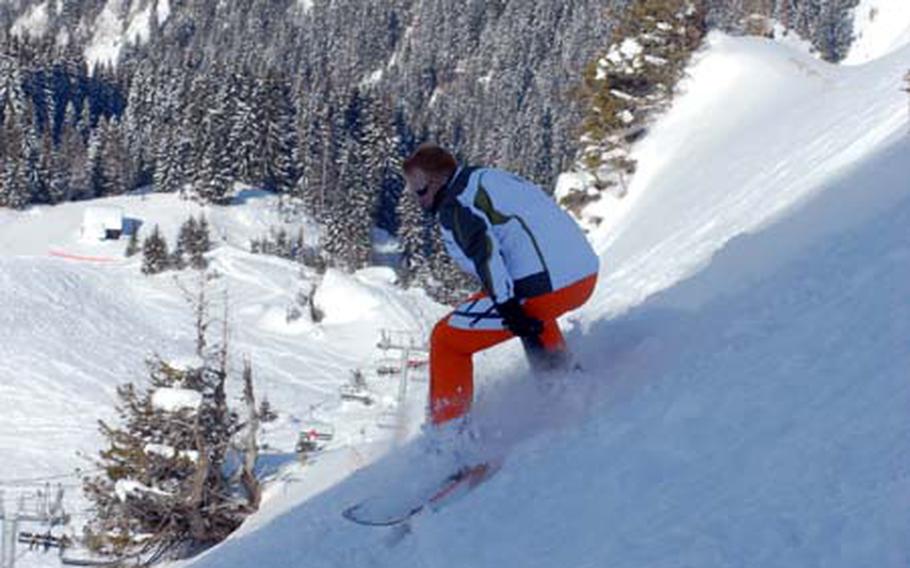 Tannenbaum Ski Club member Jeff Cowan takes on a slope at Avoriaz, on the French side of the Portes du Soleil ski area, on his snowboard on President&#39;s Day Weekend. (Seth Robson / S&S) 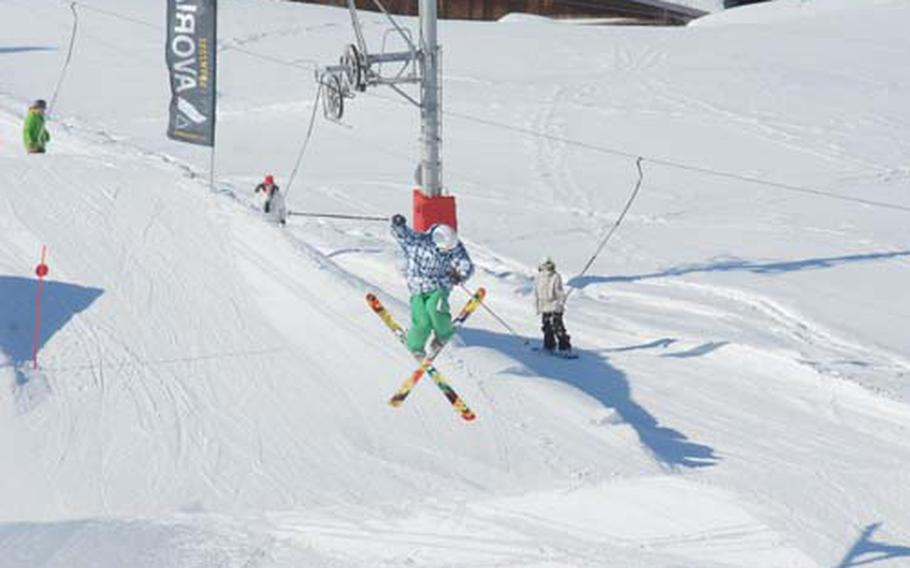 A skier peforms a "360 with Iron Cross" at Avioriaz on Presidents Day Weekend 2009. Avoriaz is on the French side of the Portes du Soleil ski area. (Seth Robson / S&S) 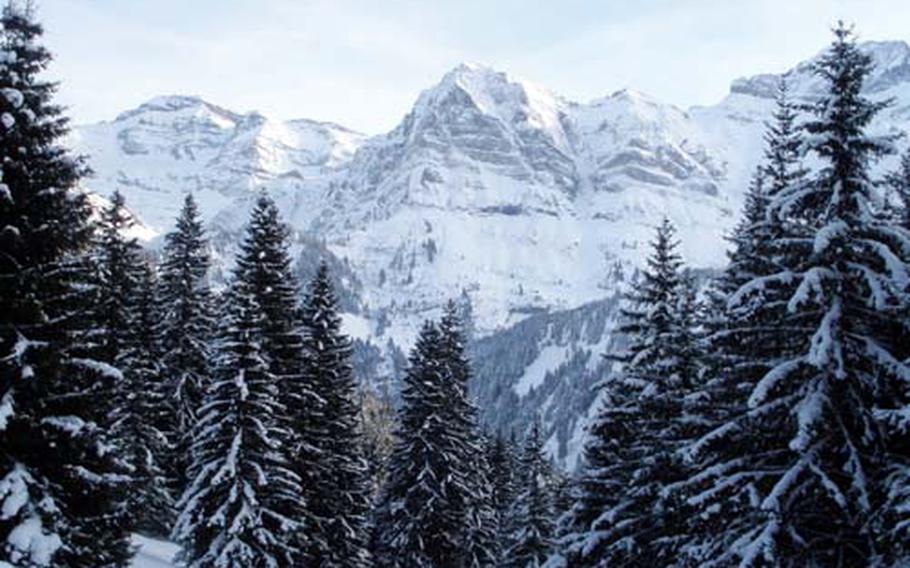 The route down from the ski area at Champery, Switzerland, offers some amazing views of the valley and surrounding peaks on the way to the Val d’Illiez. (Seth Robson / S&S)

They all went out to the Swiss town of Montreux on the Lake Geneva shoreline for a weekend of skiing at the nearby resorts of Champ&#233;ry in Switzerland and Avoriaz in France.

They were 44 members of the Tannenbaum Ski Club, mostly U.S. military members and dependents from the Kaiserslautern area, eager to sample what the Swiss and French Alps had to offer.

The skiers return year after year to Montreux &#8212; known to many through Deep Purple&#8217;s classic hard rock song "Smoke on the Water," written after the city&#8217;s casino burned down.

"We all came out to Montreux,On the Lake Geneva shoreline.To make records with a mobile,We didn&#39;t have much time.But Frank Zappa and theMothers,Were at the best place around,But some stupid with a flare gun,Burned the place to the ground.Smoke on the water and fire in the sky. Smoke on the water..."

The skiers come out to Montreux because of its proximity to Portes du Soleil, a collection of 13 ski resorts that bills itself as the largest ski area in Europe. (Ski Amade in Austria makes the same claim).

On a weekend in mid-February, John Hereford, an Air Force second lieutenant based at Ramstein Air Base in Germany, looked ready for action as he surveyed the Alps from the club&#8217;s hotel in Montreux. "The club has been coming here for as long as any of us can remember," he said.

Portes du Soleil stretches across the Chablais Alps from Mont Blanc in France to Lake Geneva in Switzerland and includes 400 miles of marked runs and about 230 lifts spread over 14 valleys and 400 square miles.

From Montreux, it&#8217;s a short drive, via the town of Monthey, famous for its winter carnival, to Champ&#233;ry, Switzerland, the nearest of the Portes du Soleil ski resorts.

The road to Champ&#233;ry snakes up a spectacular valley surrounded by jutting peaks and snowy pine-tree-covered slopes where chalets perch precariously beside frozen waterfalls. The valley floor is about 3,500 feet above sea level, while the area&#8217;s ski slopes on those surrounding mountains are in the 5,500-foot range.

Champ&#233;ry includes about a half-dozen modern chairlifts that head in all directions up, down and across a massive snow-filled bowl. There are slopes that will satisfy skiers of all levels, although brand-new skiers might find conditions too tough.

It&#8217;s only a short traverse from the top of the gondola to Champ&#233;ry-Les Crosets, a separate resort where three chairlifts intersect. There&#8217;s a large eatery, the Portes du Soleil Restaurant, and a terrain park full of jumps where snowboarders and skiers get their thrills performing acrobatics beside the piste.

From Les Crosets you can ride two- or four-seater chairlifts, the Grande Conche and Mossettes-Suisse, to the summit ridge leading from the Pointe de Mossette, with an altitude of nearly 7,500 feet. On the Champ&#233;ry side, there are a couple of intermediate groomed trails that lead back to Crosets. Advanced skiers can take on the "Wall of Death," the ungroomed black section leading back from the summit ridge.

That is what Hereford, a member of the U.S. Ski Patrol, planned to do. He took on the Wall of Death in blizzard conditions, dropping in beside a cornice that looked ready to avalanche. Soon he was waist-deep in powder, barely visible as he moved down the wall between the whiteness below and the falling flakes from above.

Farther down the slope, the terrain flattens out slightly but becomes more challenging with moguls, varying snow density and poor visibility. That was the way it was in most of the off-piste areas on the Les Crosets side of the mountain.

"It was probably the most extreme terrain I have skied in Europe," Hereford said. "It was a relatively steep slope with fairly narrow openings. I skied it three or four times ... The actual wall is relatively short, but top to bottom, the run takes maybe 15 minutes."

Not far away, on the other side of the mountain, there is another large bowl of skiable terrain accessible via the Grande Conche and Mossettes-Suisse chairlifts.

On that February weekend, the bowl included a massive face of ungroomed snow, good visibility, even during the blizzard, and only a few skiers taking advantage of the Cubore, a platter lift that gives good access to about half of the terrain.

Another chairlift serving the back of Champ&#233;ry is the Mossettes-France, which provides good access to the powder bowl reached by the Cubore, along with an intermediate piste leading to Les Brochaux on the French side of Portes du Soleil.

More adventurous skiers can head deeper into France (don&#8217;t forget to take euros in addition to those Swiss francs), riding lifts to Avoriaz &#8212; a spectacular resort with some hair-raising black runs, a half-pipe, snowboard park, a village of futuristic multistory apartments and plenty of bars and restaurants for apr&#232;s-ski activities.

Jeff Cowan, another club member, skied one day at Champ&#233;ry and took his snowboard to Avoriaz on the next day. He gave a high rating to the area&#8217;s snowboarding facilities, which included two jump parks and a half-pipe.

He tackled some of the black runs at Avoriaz on his snowboard, but avoided the Wall of Death on his skis.

Getting back to Champ&#233;ry is a logistical challenge. Once back into Switzerland and over to the Champ&#233;ry side of the mountain, the easiest way home involves skiing to the bottom of the Planachaux chairlift and riding it back up to the top of the Luftseilbahn.

If you have the energy, follow the trail to the bottom of the Grand Paradis lift and keep going. It&#8217;s a long way down, but the route offers some amazing views of the valley and surrounding peaks on the way to the village of Val d&#8217;Illiez. From there, you can ride a bus back to the parking area at Champ&#233;ry, where there are several cafes, bars and guest houses to relax in after a hard day on the slopes.

Even more relaxing is a dip in the heated indoor and outdoor baths, Lavey-les-Bains, near Monthey, although relaxation doesn&#8217;t come cheap in Switzerland.

The minimum adult admission fee for the bath is 24 Swiss francs. The upside is that the baths are just the ticket to soothe aching bodies while you marvel at the amazing alpine scenery surrounding the outdoor pools.

&#8226; The Tannenbaum Ski Club has more than 300 members. John Hereford, a member of the group, said it has been traveling to Montreux on Presidents Day weekend for many years, and "there almost definitely will be a trip next year" (Feb. 15, 2010).

The club meets twice a month at the Ramstein Officers Club. For more information, go to www. tannenbaumskiclub.com

&#8226; Lift passes aren&#8217;t cheap in Switzerland. A two-day pass for both the French and Swiss sides of the mountain costs 124 Swiss francs (about $110). If you&#8217;d rather spend more time skiing than exploring, it might pay to just buy a Swiss pass, which is cheaper at about 83 Swiss francs for the two days.

&#8226; Lavey-les-Bains is open 9 a.m. to 9 p.m. Sunday through Thursday and until 10 p.m. Friday and Saturday. Entrance to the pools, hammam and saunas costs 24 Swiss francs for three hours, 30 for four hours. There are reduced rates for children and families and several special packages. There are also various spa treatments, such as massages, clay packs and body wraps, available for varying rates and times.

Find more at its Web site: www.lavey-les-bains.ch, which has an English-language option.