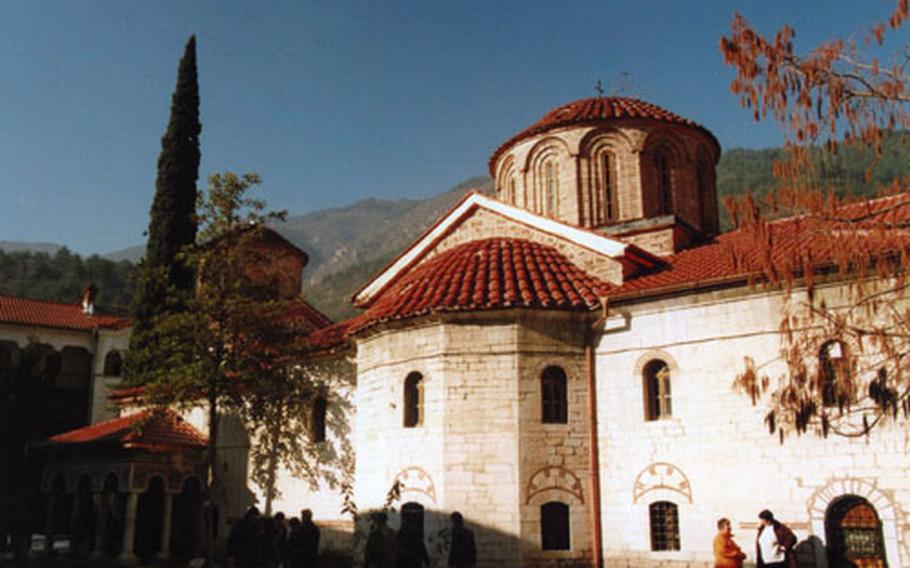 The Bachkovo Monastery, just a half hour from Plovdiv, is the second largest monastery in Bulgaria and a popular tourist destination. (Leah Larkin / Special to Stripes)

The Bachkovo Monastery, just a half hour from Plovdiv, is the second largest monastery in Bulgaria and a popular tourist destination. (Leah Larkin / Special to Stripes) An herb and spice mixture of Chubritsa, a Bulgarian herb, red pepper, basil, oregano, black pepper, cumin and salt, is artistically poured into jars to create images of people, animal and scenes. Bread is dipped into the mixture as an appetizer. It’s also used on grilled meats. (Leah Larkin / Special to Stripes) 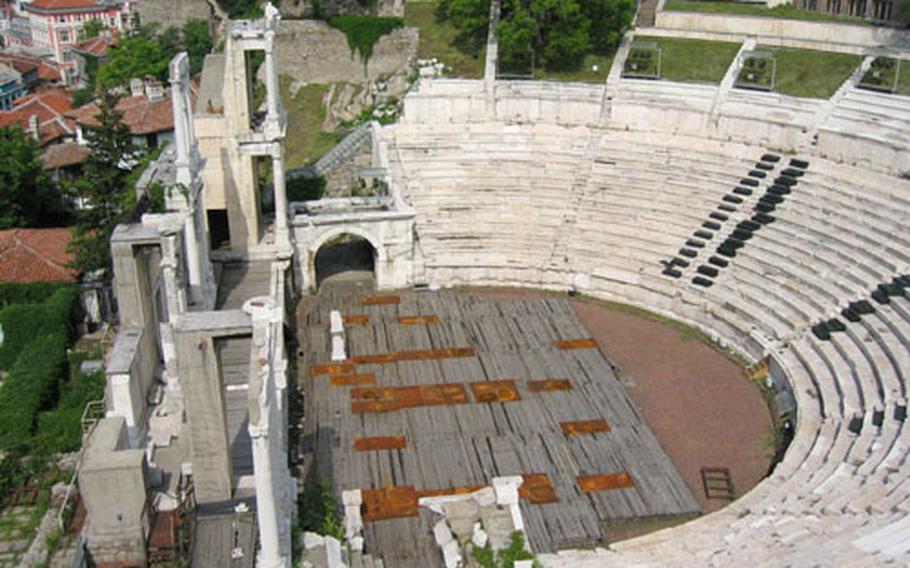 Plovdiv’s second-century Roman theater has 7,000 marble seats — most of which are filled during outdoor summer concerts, including a Verdi festival in May and June. (Karen Bradbury / S&S) Detail of the Balabanov House, a Revival Period house built at the beginning of the 19th century. It is among the houses owned by Plovdiv’s upper-crust merchants in the 18th and 19th centuries that line cobblestone streets in the Old Town.Today it’s a venue for exhibitions, concerts and theatrical performances. (Leah Larkin / Special to Stripes) 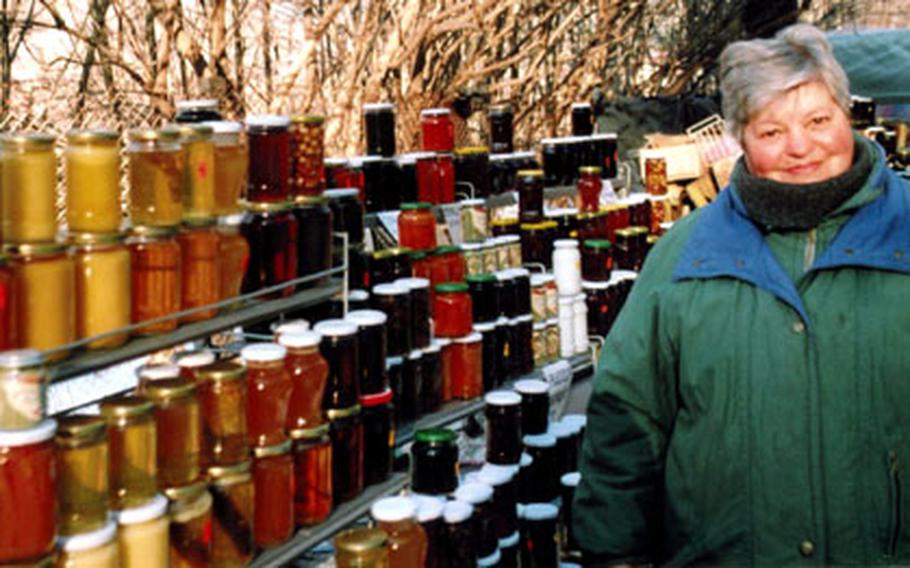 The road to the Bachkovo Monastery is lined with stands selling preserves and honey. (Leah Larkin / Special to Stripes)

&ldquo;That building was owned by my grandparents,&rdquo; guide Ghergana Toleva said as we walked down the main pedestrian street in Plovdiv, Bulgaria&rsquo;s second largest city.

Authorities seized the property during the communist years and her family has been tied up in court trying to recover it, said Toleva, who had accompanied us on a tour from the Bulgarian capital of Sofia.

That is one of the few remainders of the city&rsquo;s bleak past. The communist era ended in 1989, Bulgaria joined the European Union this year and this pleasant city of 320,000 on the banks of the Maritsa River about 80 miles southeast of Sofia is looking toward the future.

The pretty neighborhood, once home to a large population of Armenians, is especially popular in summer when tourists come to admire the houses and enjoy the outdoor cafes.

Armenians still live in the city, along with Bulgarians, Jews, Turks and Greeks.

&ldquo;The people in Plovdiv are very tolerant, calm and friendly because of these different ethnic societies who live peacefully together,&rdquo; said Toleva.

Near the Old Town are the remains of Plovdiv&rsquo;s Roman theater, dating to the second century. The Rhodope Mountains form a backdrop for the ancient site on a hill with lovely views of the city below. The theater&rsquo;s 7,000 seats are often filled in the summer when concerts are held there &mdash; including a Verdi festival in May and June.

Long before the Romans, Plov- div was settled by Thracian tribes, then the Greeks. The Roman era ended in the sixth century when Slavs invaded, followed by the Bulgars, who formed a military elite lording over the Slav majority. A well-organized state evolved and eventually a Slavic, Christian nation was formed.

Plovdiv changed hands between Bulgarians and Byzantines many times until it was absorbed by the Ottoman empire in the late 14th century.

Many of the town&rsquo;s numerous churches were burned during the 500 years of Ottoman occupation. One that remains is a jewel, the Saints Constantine and Helena Church, built in 1832 on the site of a fourth-century church.

The Jumaya Mosque is the main remnant of the Ottoman era. Sultan Murat II had the town cathedral torn down and, starting in 1421, had the mosque built in its place. It is one of the oldest Muslim houses of worship in the Balkans and one of the largest in Bulgaria.

Toleva, who moved from Plov- div to Sofia for a job, confesses that she prefers her hometown.

&ldquo;Different cultures, monuments and buildings are interwoven in Plovdiv to create a unique atmosphere,&rdquo; she says. &ldquo;At least twice a month I visit the city and the moment I enter town I feel at home.&rdquo;

A nearby sight ...Just a half-hour from Plovdiv is the Bachkovo Monastery, Bulgaria&rsquo;s second largest monastery, built between the 10th and 12th centuries.

Monasteries served as centers of art and education and are located throughout Bulgaria. These magnificent architectural complexes house ancient icons, superb woodcarvings and murals.

Bachkovo, nestled on a forested mountain slope, is noted for its beautifully restored medieval frescoes. It also contains old icons, including one that is said to be an authentic portrait of Mary painted by the apostle Luke.

On Aug. 15, the feast of the Assumption of the Virgin Mary, the icon is taken out of the church to lead a religious procession. Visitors wait in line to kiss the sacred image.

During the communist era some 32 monks lived at the monastery. Today there are only eight &mdash; but plenty of tourists.

&ldquo;They never go to church, but they come here on weekends,&rdquo; our guide, Ghergana Toleva, said of the tourists. She said the monastery is also a popular place for weddings and baptisms.