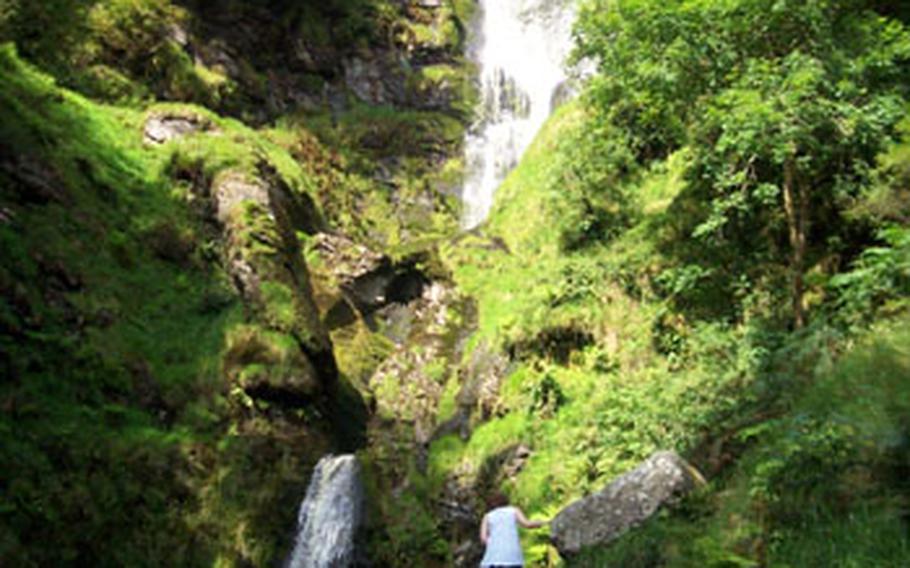 Green trees, dark branches and mossy gray stones frame the falls of Pistyll Rhaeadr in Wales. Though not a massive cataract like Niagara Falls, Pistyll Rheadr is 60 feet higher. (Terri Barnes / Special to Stars and Stripes)

Green trees, dark branches and mossy gray stones frame the falls of Pistyll Rhaeadr in Wales. Though not a massive cataract like Niagara Falls, Pistyll Rheadr is 60 feet higher. (Terri Barnes / Special to Stars and Stripes) 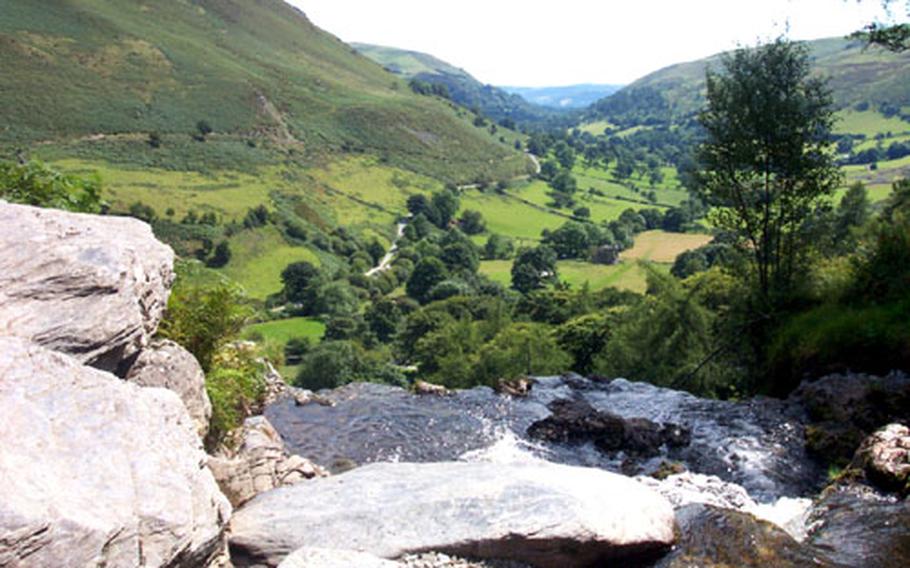 Water flows gently and then plunges 240 feet from the top of Pistyll Rhaeadr, the highest waterfall in Wales and the United Kingdom. On the path leading to the top, and from the falls itself, there are stunning views of the surrounding countryside. (Terri Barnes / Special to Stars and Stripes)

The border was unmarked, but we knew we had crossed from England into Wales by the signs. In Wales, all of them, even the stop signs, are in English and Welsh.

Vowels and consonants in Welsh cling together in unexpected ways, forming village names like Bwlchyddar and Penybontfawr &mdash; and the name of our destination, Pistyll Rhaeadr, the highest waterfall in England and Wales.

We were visiting Shropshire in western England when we decided to make a daylong foray into Wales. We traveled past villages and valleys, hills and hedgerows, all looking like storybook pictures, to reach the falls.

Pistyll Rhaeadr, 240 feet high, is an impressive sight. Its plunging white water makes long leaps over gray rocks, splashing down under a natural stone arch. A rainy spring and summer guaranteed plenty of green leaves and white water for our visit.

The falls are in a pastoral setting. A tea shop, camping store and bathrooms are the only nearby buildings, except for neighboring farms. Some parking is available in a small graveled area and more beside a fenced sheep pasture. We parked by the sheep.

A large map near the bottom of the falls shows the route of the walking paths to the top. We took the smaller, more direct path, which included stone steps at the steeper portions.

The hike was easily accomplished in comfortable walking shoes by our family of five, including three children ranging in age from 11 to teens. We saw families with younger children on the wider graveled path, which swings out in an arc and takes a longer and gentler way to the top.

The paths converge near the crest of the hill, not far from the top of the falls. Looking across the countryside from there was worth the trip even if we had gone no farther &mdash; a panoramic view of the hills and valleys below.

The path then leads back to the waterfall. When we got there, we discovered the very top of Pistyll Rhaeadr is a cataract not visible from the bottom. Just below that, we found a clear shallow pool, along with another great view right over the edge of the falls.

After the hike up, a leisurely 30 minutes or so, we happily took off our shoes and socks and dipped our toes in the cold water. The children hopped from rock to rock and skipped stones. We heard the sounds of Welsh and English spoken, along with the music of rushing water.

Walking down was much faster, but it seemed a shame to hurry and not enjoy every inch of the scenery on the way. Back at the bottom, a few hops over the rocks took us to a pool below the falls. Here a very narrow footbridge crosses to the wooded bank on the other side. From there we saw the stream flowing from the falls through a green meadow set aside for camping.

Before leaving, we treated ourselves to tea and scones. We sat in the sunny garden of the tea shop, where we could still see and hear the water.

A sign at the bottom of the waterfall says it is one of the seven wonders of Wales. An 18th-century poem on the sign has it leading the list:

Snowdon&rsquo;s mountain without its people,

In the 21st century, there may be differing opinions on the greatest sights in Wales, but after spending a sunny day at Pistyll Rhaeadr, we understood why it topped one poet&rsquo;s list.

Terri Barnes is a freelance writer and columnist living in Germany. Contact her at spousecalls@stripes.com.

Getting there&bull; The nearest airports serving Shropshire are Liverpool, Birmingham and Manchester, each about an hour away. A rental car is convenient for getting around once you arrive, since local trains are not available to many of these locations. It is recommended that you have a good map of Wales, even if you have GPS.

&bull; To find Pistyll Rhaeadr from Shropshire: Cross into Wales via B-4580 of B-4396, and follow either to the village of Llanrhaiadr-ym-Mochnant. Just past the village center, a small signpost pointing northwest says &ldquo;Waterfall.&rdquo; The road leads straight to Pistyll Rhaeadr.

&bull; To find St. Melangell&rsquo;s church, a nearby pilgrimage spot, from Llanrhaiadr-ym- Mochnant: Take B-4396 a little way down the road, then turn right toward Pen-ffordd. Pass Pen-ffordd and Pen-y- bont-fawr. After that village, take B-4391 toward Llangynog. At Llangynog, look for the sign for St. Melangell&rsquo;s church, on the left across from the New Inn Pub. Parking is limited at the church, and the road is only suitable for small vehicles. Parking is also available in the village for those who choose to walk to the church.

Good to know&bull; Several scenic walks, including one to Pistyll Rhaeadr, are available in the area and listed on the church&rsquo;s Web site, www.st-melangell.org.uk/English/Church/stmelangellchurch.htm.

&bull; There are no admission charges to Pistyll Rhaeadr or St. Melangell&rsquo;s church.

&bull; Be prepared to carry out your own litter. We didn&rsquo;t see many trash cans, but we did see signs asking visitors to carry out their own trash.

&bull; About the Seven Wonders of Wales: www.bbc.co.uk/wales/northeast/sites/seven_wonders.

&bull; About tourism in Shropshire: www.virtual-shropshire.co.uk.

&bull; Options on places to stay: