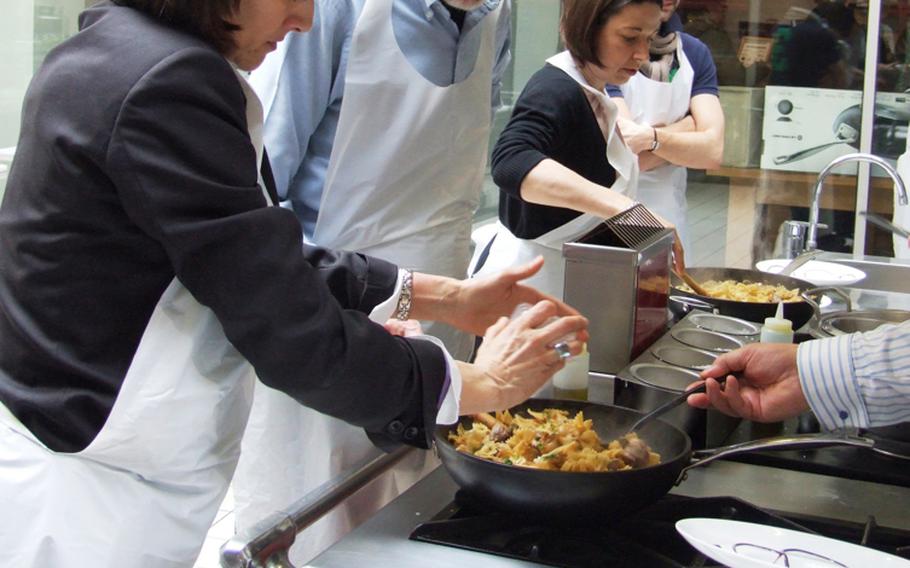 The cooking-class students - Bob is second from left - mix all the ingredients for the last step of the L'atelier des Chef class. Decorated plates, from which the students will eat the final product, are in foreground. (Leah Larkin/Special to Stars and Stripes)

The cooking-class students - Bob is second from left - mix all the ingredients for the last step of the L'atelier des Chef class. Decorated plates, from which the students will eat the final product, are in foreground. (Leah Larkin/Special to Stars and Stripes) 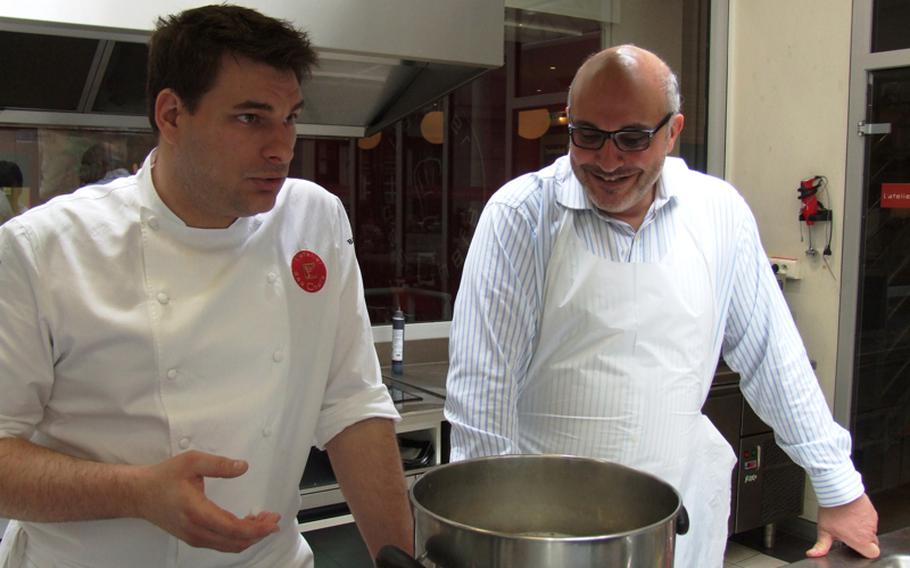 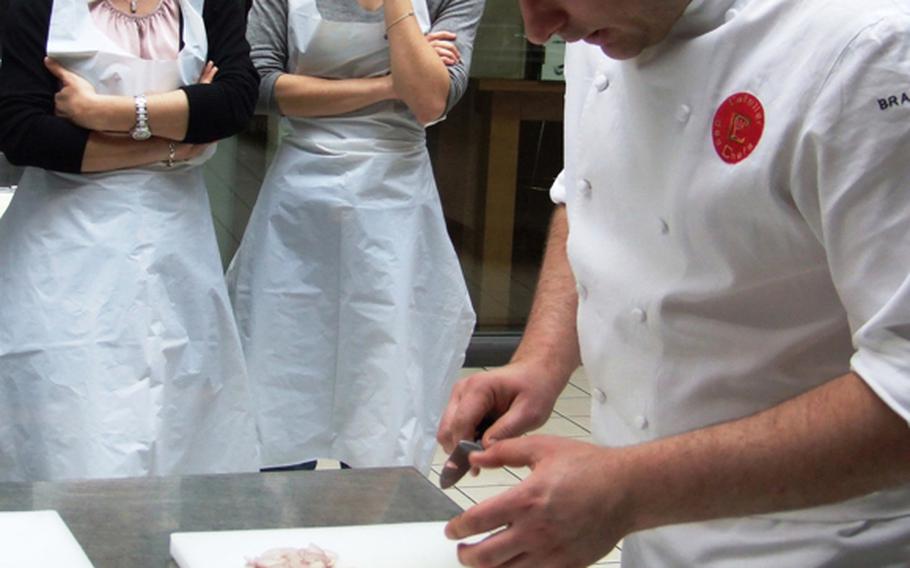 The proper way to slice a shallot or onion as demonstrated at one of the L'atelier des Chefs course - bend the fingers back to avoid cutting yourself. (Leah Larkin/Special to Stars and Stripes) The final product from the cooking class - which the students will consume: Farfalle with duck, lemon and capers. Very tasty. (Leah Larkin/Special to Stars and Stripes)

My husband, Bob, (also known as Bicycle Bob) is more comfortable on the seat of a bike than at a kitchen counter. Nonetheless on a recent trip to Paris, I talked him into joining me for a lunchtime cooking course.

He was fearful of slicing shallots as the teacher instructed (he left that task to me), but he did a masterful job of separating the meat of a duck breast from its skin, then cutting the flesh into small, evenly sized chunks. I was relieved &mdash; and proud of his culinary precision. At home, he leaves all the cooking to me.

We were at L&rsquo;atelier des Chefs, a cooking school with a broad palette of offerings, from the 30-minute lunch course to two-hour sessions. We chose the former and joined five others to whip up Farfalle au Canard, Citron et C&acirc;pres, (farfalle pasta with duck, lemon and capers). Cost of course and meal: 15 euros per person.

After everyone donned an apron, instructor-chef Fran&ccedil;ois Pelletier got down to business, explaining and directing procedures in rapid-fire French. I speak French, but at times he lost me. No problem. Just watch.

First, he demonstrated skinning the duck. Then, how to properly slice and dice a shallot, explaining that the same procedure should be followed for an onion. Hold the vegetable with the fingers bent back to avoid cutting yourself. Don&rsquo;t press too hard or the juices of the shallot/onion will escape, and you need the juice for flavor. His slicing technique was fast and smooth, a delight to watch, and the slices were all equally sized and perfect.

Several of our classmates, who no doubt had been to these classes before, were almost as proficient. I was a failure &mdash; slow and clumsy. Some of my slices were fat, others skinny, but I did not worry. Who would know the difference in the final dish?

When we were ready to move on to cooking the pasta and saut&eacute;ing the duck, Pelletier offered this advice: For cooking pasta, add 2 teaspoons of coarse salt per liter of water, and don&rsquo;t add oil to the cooking water. For al dente (firm) pasta, check it for the correct consistency by breaking a piece. It will be al dente when there is still a tiny bit of white left in the middle. Not to worry, as the pasta will continue to cook after it is removed from the heat and water.

As to saut&eacute;ing the duck, or any meat, let the pan heat up before adding the meat. Resist turning it until it begins to brown. If you try to turn or move it too soon, it will stick to the pan. When it begins to color, it means it has reached the same temperature as the pan and will turn easily.

Salt and pepper: Add a bit of salt in the beginning of cooking as it aids the cooking process. Add more as desired at the end of cooking. Add pepper at the last minute &mdash; or at the table. If you add it too soon, it loses its taste.

While some students finished the cooking process, others showed their creative skills by decorating the plates with swirls of cr&egrave;me de balsamique, a product that is very trendy these days, Pelletier said.

The lesson was efficient, fast and impressive. We all gathered in an adjoining room to savor the tasty creation and chat. For an additional 7 euros you can have a glass of wine, dessert and coffee to go along with the main dish.

Several of the group, who work nearby, were regulars. Jack Bussy, a burly type who fit the stereotype image of a chef, has been attending two to three times a week since 2007.

&ldquo;I love to cook and eat,&rdquo; he said. &ldquo;It&rsquo;s calm here. I know everyone. Restaurants are noisy and you don&rsquo;t know what you&rsquo;re eating. The people are not always nice. Restaurants are more expensive.&rdquo;

Natalie Ceillier was attending for the second time, but sounded as if she would be back for more. &ldquo;It&rsquo;s good, economical and very enjoyable,&rdquo; she said. &ldquo;You meet nice people here.&rdquo;

As for Bob, he excelled in the Paris kitchen. But, unfortunately now that we&rsquo;re home, he remains more enamored of his bicycle than frying pans and casseroles.

Two French brothers, Nicolas and Fran&ccedil;ois Bergerault, started L&rsquo;atelier des Chefs in 2004 &ldquo;to get people back in the kitchen.&rdquo; The lunchtime courses have been a huge success, but for those with more time, there is a range of lengthier courses from a one-hour &ldquo;party sushis&rdquo; course for 36 euros to a two-hour &ldquo;products of the season&rdquo; course for 72 euros.

The company now has 12 ateliers around the world: five in Paris, five elsewhere in France and one each in London and Dubai. Thirty more are planned to open by the end of 2011.

Each location has a shop with an excellent range of kitchen gadgets and paraphernalia, as well as gourmet products. I purchased a bottle of tomato vinegar that is exquisite. Bob went for concass&eacute;e de poivrons grill&eacute;s (grilled red pepper pur&eacute;e).

Find more information and current courses at www.atelierdeschefs.fr, which also includes recipes, videos and online registration for classes. You can sign up online. The English language version is only for the programs in London.