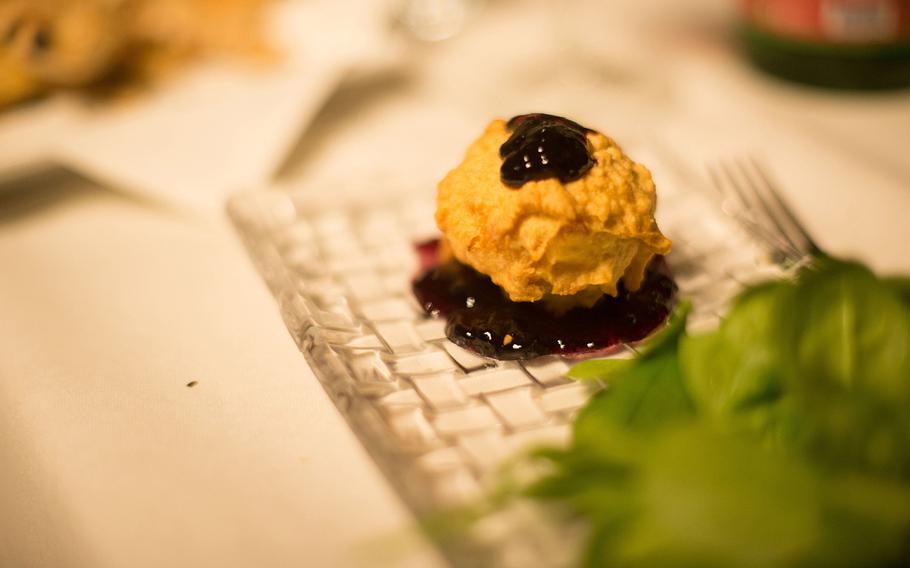 A ricotta cheese dumpling is part of the antipasti "dalla terra" at the restaurant Panart in Carinaro, Italy. The restaurant is a 10-minute drive from the U.S. naval base support site in Gricignano d'Aversa, outside Naples. ()

A ricotta cheese dumpling is part of the antipasti "dalla terra" at the restaurant Panart in Carinaro, Italy. The restaurant is a 10-minute drive from the U.S. naval base support site in Gricignano d'Aversa, outside Naples. () 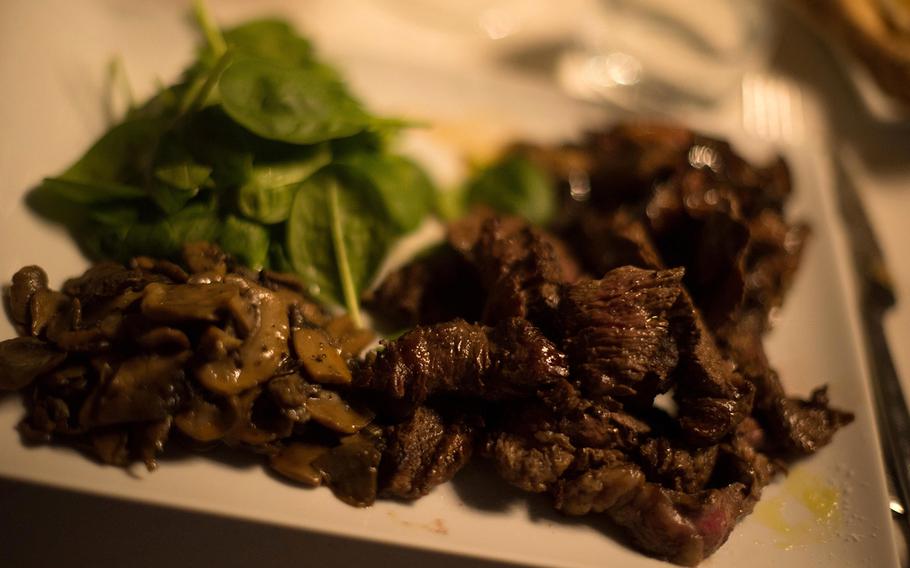 Argentine beef tips at the restaurant Panart in Carinaro, Italy, just outside the U.S. naval base support site in the Naples area. The dish is served with sides of saut?ed mushrooms and a bed of baby spinach. () 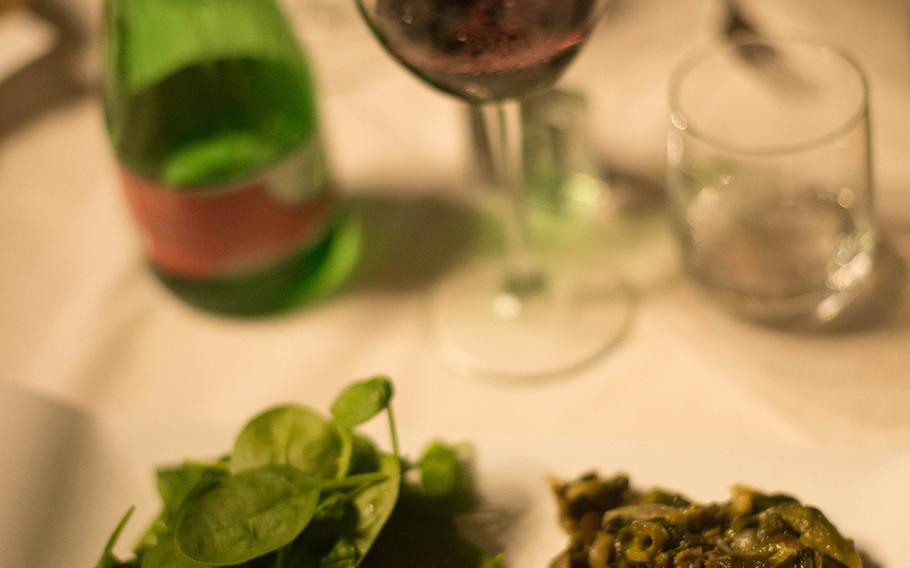 A black swine ("maiale nero") pork chop at the restaurant Panart in Carinaro, Italy, just outside the U.S. naval base support site in the Naples area. The dish is served with sides of escarole and baby spinach. () 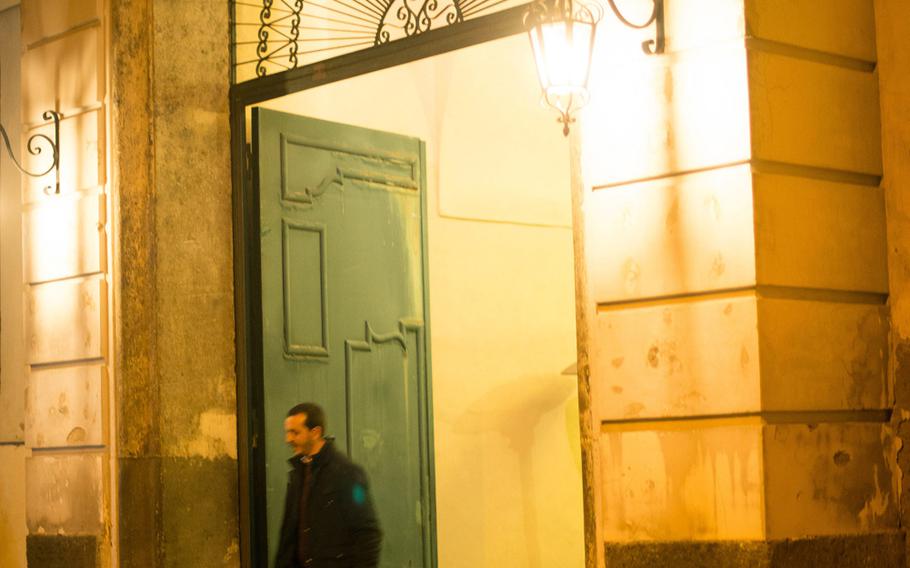 The restaurant Panart, in Carinaro, Italy, is a 10-minute drive from the U.S. naval base support site in Gricignano d'Aversa, just outside Naples. With a solid lineup of steaks, pizzas and pastas that strays from typical offerings in the area, the restaurant is worth a look. (Steven Beardsley/Stars and Strip)

I’d go back to Panart.

Crazy as the place may feel on the inside, with its faux grotto interior, mirrored dividing walls and plastic chairs set at wobbly tables, I’d return to the Carinaro restaurant for its antipasta dalla terra alone, a savory assortment of meat, cheese and veggie appetizers.

The mascarpone fritter in honey. The porcini mushroom stuffed with eggplant puree. The provola wrapped in pancetta. All are nicely done and appreciably different from what’s typical in these parts to make a second trip worthwhile.

There’s a bit more to like about Panart than just the antipasti, however.

The location is convenient for many Navy personnel assigned here, only 10 minutes from the base support site in Gricignano d’Aversa. Built into a renovated palace in the small town of Carinaro, the restaurant occupies a large space ideal for bigger dinners, with separate dining rooms and event spaces set around an outdoor patio.

Granted, a space that might have been hopping on a summer night in the weekend felt rather vacant on a recent cold and rainy Tuesday evening. But food matters most in Naples, and Panart has plenty to offer. Besides antipasti, there are pizza, grilled meat cuts and some inventive pastas. With some hesitation we passed over the cacio e pepe with pork cheeks and a razor clam pasta, zeroing in on the meats. We eventually settled on Argentine beef cuts and a chop of black pork (maiale nero).

The beef arrived with sautéed mushrooms, the pork with escarole sautéed with capers and olives, a welcome change in an area where broccoli rapini is the go-to green. A small bed of baby spinach came with each dish.

Our cuts were grilled nicely, and the sides went well. A bottle of aglianico, a favored red wine in this region, paired well with the juicy meats.

Our bill came to 57 euros (about $65), a price easier to stomach now than it was a year ago, when the euro was much stronger against the dollar.

For a nice meal at roughly the same price, my money is still on Abraxas Osteria in Pozzuoli, which changes its menu seasonally, has daily specials and feels cozier, even when a bit empty on a weekday night. La Fattoria del Campiglione, also in Pozzuoli, is in the same price zone and is recommended for meat lovers. I might be biased, living closer to both restaurants than to Gricignano.

But for a good dining option closer to the support site, Panart certainly deserves a look, whether it’s your first or second.

Getting there: A GPS device or phone app is recommended. Carinaro is small but the roads are often unmarked, and directions can be confusing.

Prices: Antipasti a la carte runs about 6 euros; pastas from 9 euros up; pizzas closer to 6 euros and meat dishes 9 euros and up.

Recommended: The antipasta dalla terra is a selection of meats, cheeses and veggie appetizers

Parking: Street parking is available, as is parking at a large lot around the corner. There may or may not be someone watching cars on a given night, so remove valuables.

Accessibility: The menu is in Italian. Our waitress spoke English well enough to answer our questions.