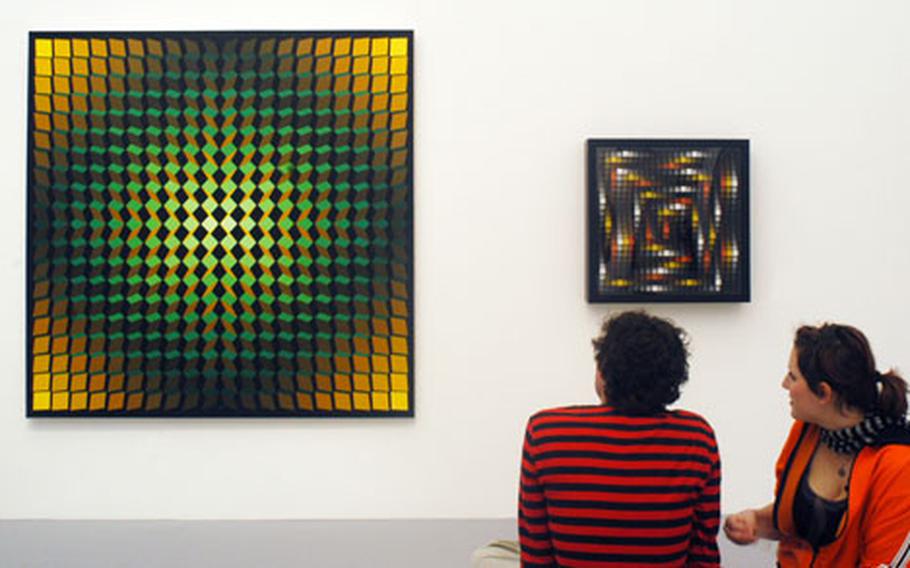 A couple enjoys a work of French artist Yvaral at the optical art exhibit at the Schirn Kunsthalle in Frankfurt. (Peter Jaeger / S&S)

A couple enjoys a work of French artist Yvaral at the optical art exhibit at the Schirn Kunsthalle in Frankfurt. (Peter Jaeger / S&S) A visitor is standing on a circular work of art. (Peter Jaeger / S&S) Viewers become part of the art as they are reflected by glass in this work by German artist Christian Megert called "Mirroir Room." (Peter Jaeger / S&S) 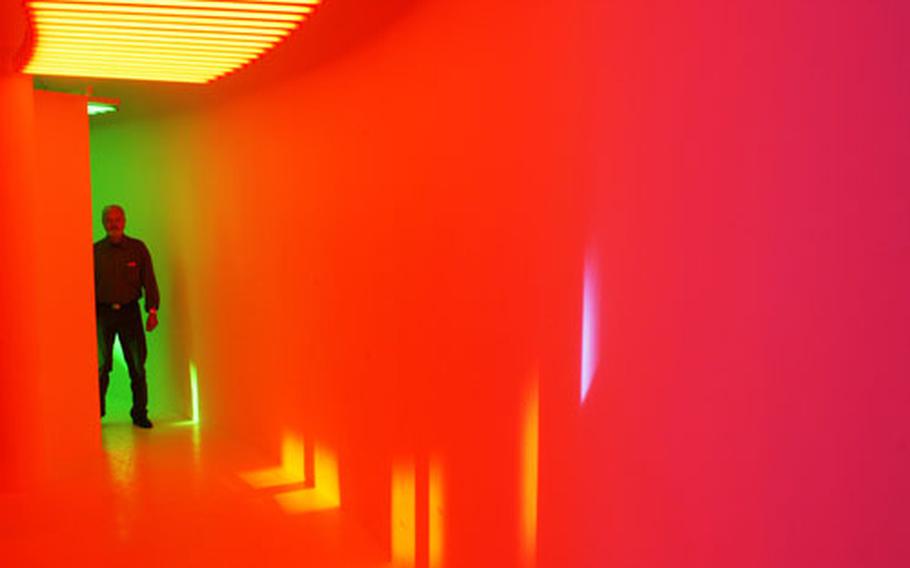 These are some of the impressions of a show in Frankfurt, Germany, by a group of international artists who worked on a marriage of science and art in the 1960s.

Fascinated by the physical laws of optics and light, their goal was to try to confuse the viewer while setting the images and objects in their large paintings into motion. They truly wanted to put their art in the eye of the beholder, force them to interact, and make an impact that would not soon be forgotten.

Victor Vasarely, Bridget Riley, Fran&#231;ois Morellet, Julio LePark and Gianni Colombo are just a few of the artists who surprised the viewers who came to see their &#8220;op art&#8221; &#8212; optical art &#8212; exhibitions. Their eye-catching patterns became so popular they were used on posters, clothing and housewares.

The Schirn Kunsthalle in Frankfurt is holding an exhibit of some of the best of these works. It covers an overview of the art movement that seems more revolutionary than most of today&#8217;s recent styles. The exhibit includes paintings, sculptures and kinetic installations.

The show is so exciting that it is drawing not only art buffs but also many school classes. Keep that in mind when making plans to attend.

The museum is open 10 a.m. to 7 p.m. Tuesday plus Friday through Sunday, and 10 a.m. to 10 p.m. Wednesday and Thursday. Admission is 8 euros for adults, 6 euros for those qualifying for discounts (including children and students), and free for children younger than 8. A family ticket costs 16 euros.