Off-piste: Europe has plenty of locations to blaze your own trail 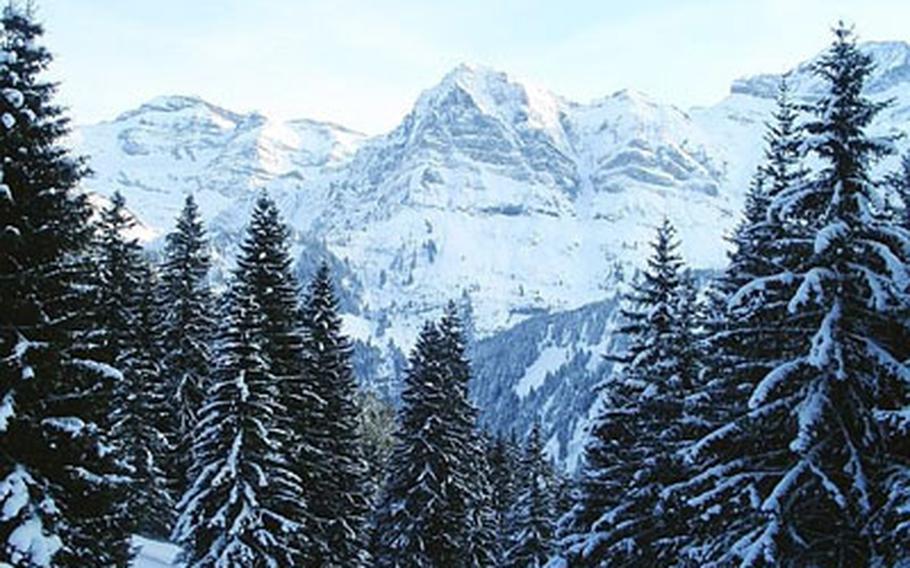 The route down from the ski area at Champéry, Switzerland, offers amazing views of the valley and surrounding peaks on the way to the Val d’Illiez. (Seth Robson/Stars and Stripes)

The European Alps boast some of the most spectacular off-piste skiing in the world.

Fortunately for American skiers stationed in Europe, the majority of Europeans have little interest in straying off the groomed runs, leaving plenty of virgin powder for visiting free skiers to enjoy.

While the European skiers can think of nothing better than a day of grand-slalom-style carving through the crowds, the American powder hound prefers his or her snow the way it fell.

To free skiers, it&rsquo;s sacrilege to crush pristine snow with a groomer. They like nothing better than waist-deep powder. To them, an untracked slope looks like a giant wedding cake they long to devour. The fewer with the same intention, the better.

There&rsquo;s nothing like skiing to the bottom of a hill, then turning around to gaze admiringly at your tracks. If you&rsquo;re skiing with a buddy, it&rsquo;s fun to see how perfect you can make the figure-eight patterns formed by your overlapping paths.

Some of the most accessible powder in Germany can be found at Berchtesgaden, where the Jenner ski area offers a large selection of ungroomed terrain alongside plenty of intermediate-level slopes and trails for less-experienced skiers at reasonable lift ticket prices. After a good dump of snow there are acres of slopes waiting in an area with spectacular scenery that includes views of the infamous Eagles Nest, where Adolf Hitler pondered his conquest of Europe, and the surrounding mountains and lakes.

If you&rsquo;re there for the weekend and luck is with you, the lift staff will keep the top T-bar closed on the first day, then fire up the lift to open up a good-sized area for powder hounds on Sunday.

The most familiar ski destination for many Americans stationed in Europe &mdash; Garmisch, Germany &mdash; is definitely not the best place to find powder.

The Hausberg, just down the road from Edelweiss Lodge and Resort, is often icy and crowded. There&rsquo;s powder to be found near the top of the mountain and

among the pines but, unless it&rsquo;s an exceptional season, there are far better (and cheaper) places to ski in Austria.

The other Garmisch ski area, the Zugspitze, gets plenty of snow but suffers from a limited amount of accessible terrain. Fresh snow can be found on the sides of the large bowl that encompasses the ski area, but to get to it requires plenty of traversing, and again, the skiing here doesn&rsquo;t come cheap.

A much better destination for those in search of powder is over the pass from Garmisch in &Ouml;tztal, Austria. A day pass at the Hochoetz ski area won&rsquo;t burn as big a hole in your pocket as the ones in Garmisch, and it&rsquo;s much better value for money.

At first glance Hochoetz offers spectacular scenery and pretty average on-piste runs that are intermediate difficulty at best. But for the powder enthusiast, this place is a dream come true with some fantastic runs through pine forest that is just dense enough to keep most skiers out but open enough to make skiing there plenty of fun.

The Mohrenkopf, which rises to about 7,025 feet, offers amazing tree runs or, for the most daring, a climb above avalanche fences to find more powder stashes below.

Austria is blessed with so many resorts dumped on by limitless quantities of powder each winter that it might take a lifetime to explore even half of them.

For example, Bad Gastein, about an hour&rsquo;s drive south of Salzburg, has several resorts, each with massive off-piste areas, although sometimes it takes a bit of exploring to find the best snow. Most skiers who go to Sport Gastein spend their day sliding up and down a couple of massive icy ramps above the gondola mid-station. Little do they know that the trees beneath the mid-station are hiding a huge powdery slope that&rsquo;s an adventure playground for the three or four folks intrepid enough to find it each day.

Switzerland and France have just as much powder as Austria, although getting to it will cost you.

Portes du Soleil, a collection of 13 ski resorts near Lake Geneva that bills itself as the largest ski area in Europe, (Ski Amad&eacute; in Austria makes the same claim) has some of the deepest powder in the Alps.

On the Swiss side of the resort, at Champ&eacute;ry, you can challenge the Wall of Death &mdash; a sheer face that it&rsquo;s too steep for any snowplow to mess up.

Even better powder accumulates on the other side of the mountain, on the route from Champ&eacute;ry to the Avoriaz ski area in France, where a single platter lift opens up a huge bowl that the locals appear not that interested in.

At Avoriaz there are some particularly steep and powdery black runs that are on par with the Wall of Death.

An important aspect of free skiing in Europe is that much of the powder is accessible inside ski area boundaries where avalanche danger has been mitigated by the use of explosives following heavy snowfalls.

However, skiers should be aware of the risks involved, keep tabs on local conditions, ski with a group, carry safety equipment and steer clear of areas where there is potential for avalanches.