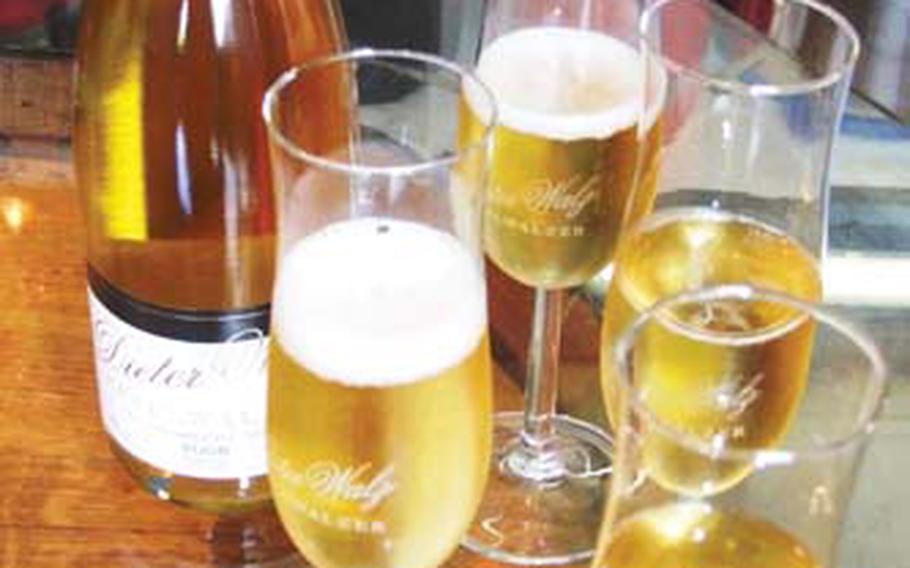 Dieter Walz got the idea of making apple bubbly 14 years ago. The process is like that of making champagne from grapes. His Apfelwalzer sells for 9.20 euros a bottle. (Leah Larkin/Special to Stars and Stripes)

Dieter Walz got the idea of making apple bubbly 14 years ago. The process is like that of making champagne from grapes. His Apfelwalzer sells for 9.20 euros a bottle. (Leah Larkin/Special to Stars and Stripes) Armin Treusch treats apples like grapes and makes 25 kinds of apple wine. He also operates a gourmet restaurant and a guest house where customers can try the wine with food. (Leah Larkin/Special to Stars and Stripes) Apple wine is synonymous with taverns in the Sachsenhausen district of Frankfurt, Germany, where patrons down glasses of the inexpensive, low-alcoholic beverage known as Ebbelwoi.

But not far away, in the Odenwald hills to the south, two men are working to enhance the status of the fermented juice. They are treating the fruit much as vintners treat the grape to create products meant for classier surroundings.

Armin Treusch makes 25 kinds of apple wine. Dieter Walz specializes in Apfelwalzer, an apple bubbly. Both believe they have something special.

"The idea is to make apple wine like real wine," Treusch says. "We use different apples, just like different grapes are used to make wine. We try to bring culture to apple wine."

Treusch even bottles his apple wine in traditional Bordeaux bottles with a cork and serves it in regular wine glasses &mdash; not the standard water glass commonly used in those Frankfurt taverns.

At his restaurant in Reichelsheim, Treusch recommended a Treusch 2006 Rheinischer Bohnapfel to accompany the schnitzel with apple wine-onion sauce I ordered. The taste was very pleasant &mdash; much better than the Sachsenhausen brew.

Treusch said he got the idea of bringing class to apple wine some 20 years ago when picking apples in the field with his children. "I wondered why we couldn&rsquo;t make apple wine like regular wine," he recalls. "That was the beginning."

In the middle of his two adjoining restaurants, the gourmet Schwanen and the Gasthaus Johanns Stube, is his "Pommothek," an apple Vinothek, with shelves of various kinds of apple wine and other apple products for sale. The wine starts at 5.90 euros per bottle.

Treusch says there are now five or six other people making different kinds of apple wine in the Odenwald. One is Walz, who takes things a step farther with his apple "champagne." Walz, who has a distillery in Seidenbuch near Lindenfels, likes to tell how he got the idea to make a fizzy apple wine.

"One of my clients made champagne in his basement," he says. "I asked if I could do the same with apple wine&hellip;. In the beginning I made many mistakes. It all exploded. I had to put on a thick jacket and diving mask to clean up the mess. But I didn&rsquo;t give up. Today it&rsquo;s so good I can take you to my cellar."

Walz won&rsquo;t say how many bottles of the bubbly he produces each year, but last year he turned 25 tons of apples into brandy, wine and the fizzy brew. To make some 70 types of alcoholic products, he uses berries, nuts, mushrooms and fruits of the region. He grows ancient species of fruit trees that are no longer commonly cultivated.

"I collect the worthwhile aromas from the land of the Odenwald and unite them with alcohol. I&rsquo;m a practical Verbinder (uniter)," he says with a hearty laugh as he pops a cork of Apfelwalzer 2006, a dry and flavorful sparkling wine with 8 percent alcohol. He produces three types of his apple "champagne": extra dry, dry and medium dry.

Before turning his talents to schnapps and wine, Walz was an engineer. "I earned more money then, but now I&rsquo;m much happier," he says. "Before I had a job and free time. Now I have a life."

Photojournalist Leah Larkin lives in France and can be contacted through her Web site, www.leahlarkin.com, or blog address, www.provencetales.typepad.com.

&bull; For more about Armin Treusch, his wine and restaurants, see www.Treuschs-Schwanen.com.

&bull; For more on Dieter Walz&rsquo;s wines and to set up a wine tasting, see www.apfelwalzer.de. Both sites are in German only.