Oberammergau: It takes a village to stage this Passion Play 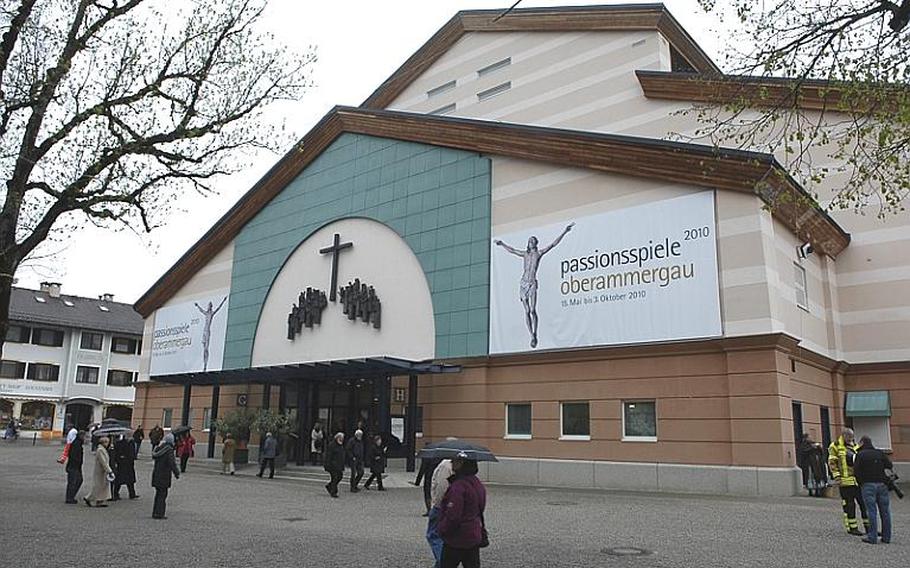 Buy Photo
The Oberammergau Passion Play is staged in an impressive community theater with 4,700 seats in a covered auditorium and open-air stage. (Jennifer H. Svan/Stars and Stripes)

Buy Photo
The Oberammergau Passion Play is staged in an impressive community theater with 4,700 seats in a covered auditorium and open-air stage. (Jennifer H. Svan/Stars and Stripes) 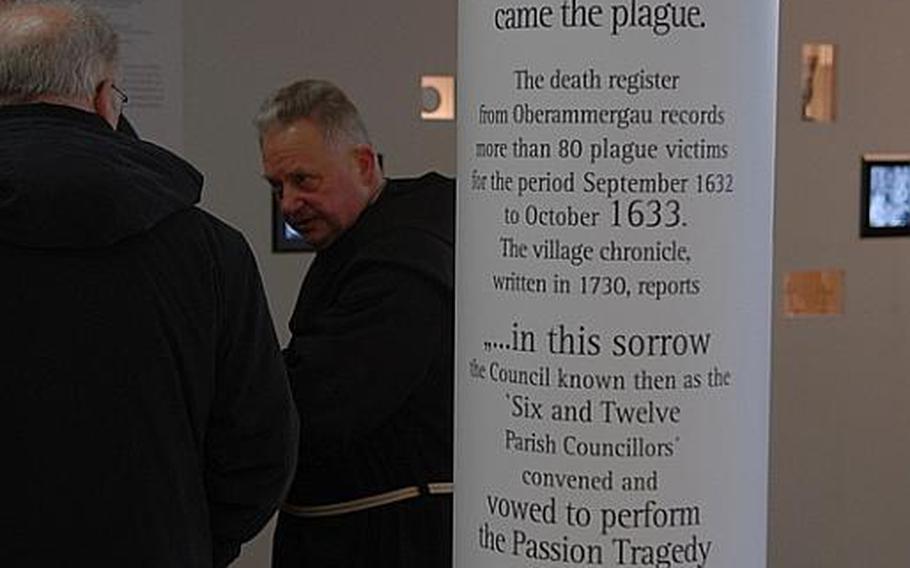 Buy Photo
In 1633, after the loss of more than 80 people to the Black Plague, the village of Oberammergau made a promise to God that they would perform the 'passion tragedy' of Jesus Christ's last days every 10 years into perpetuity if they would be spared further deaths. According to the town's history, no more people died from the plague and the village, with few exceptions, has been performing the passion play every 10 years since. (Jennifer H. Svan/Stars and Stripes) 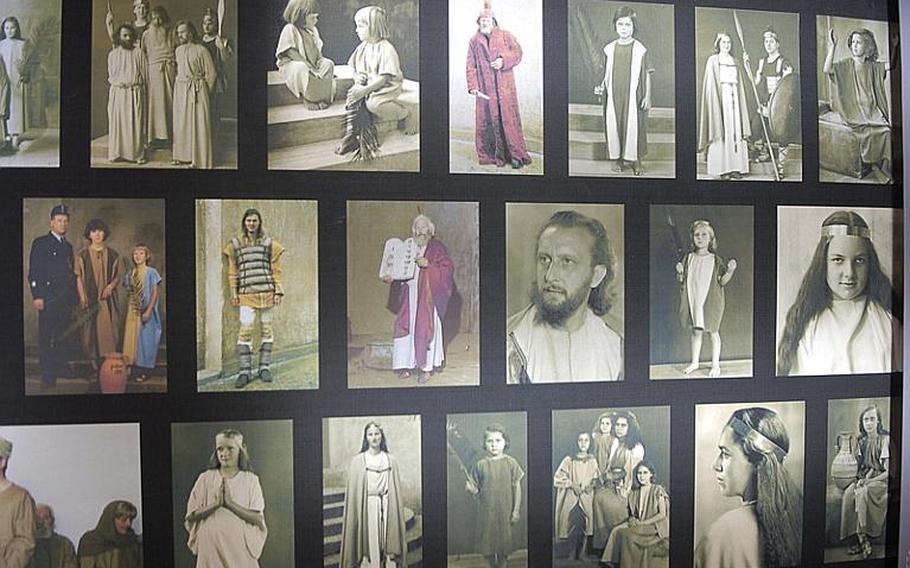 Buy Photo
A photo collage of actors from past Oberammergau passion plays is displayed inside the town theater. (Jennifer H. Svan/Stars and Stripes) 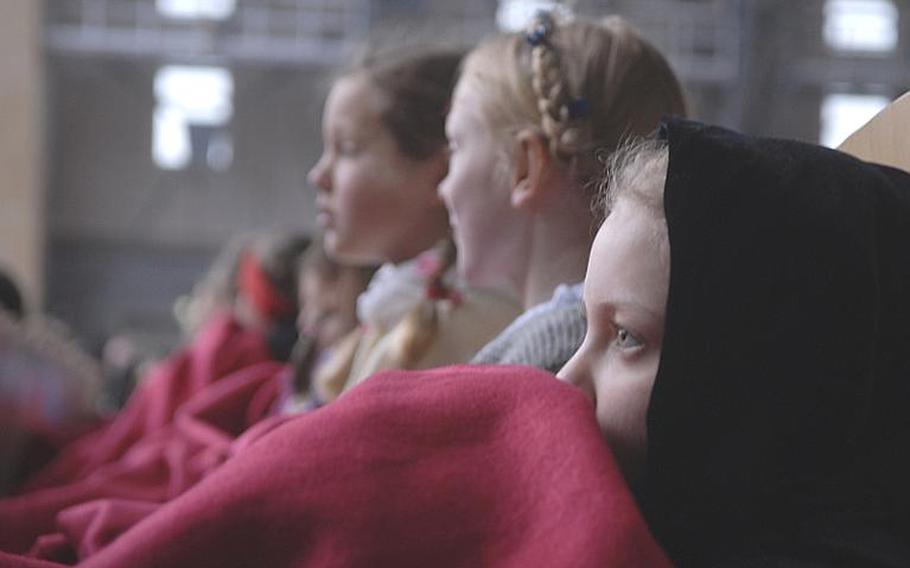 Buy Photo
Oberammergau village girls bundle under blankets during a Roman Catholic Mass held on the Saturday morning before the 2010 premiere of the town's passion play on May 15. The auditorium is covered but the open-air stage lets in the elements, making it a good idea to dress warmly and take a blanket if attending the play, which ends at 10:30 p.m. (Jennifer H. Svan/Stars and Stripes) 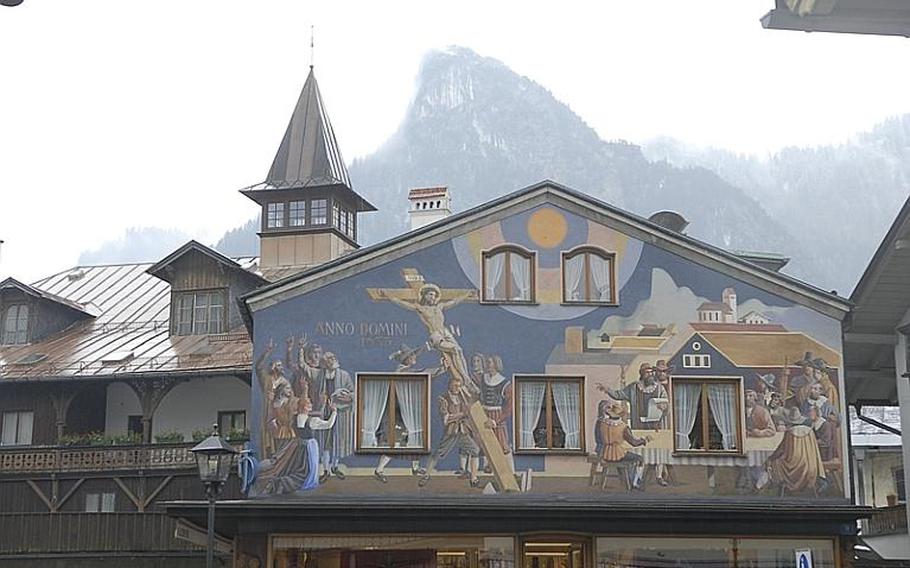 Buy Photo
Religious murals on the exterior of buildings are common in Oberammergau. (Jennifer H. Svan/Stars and Stripes) 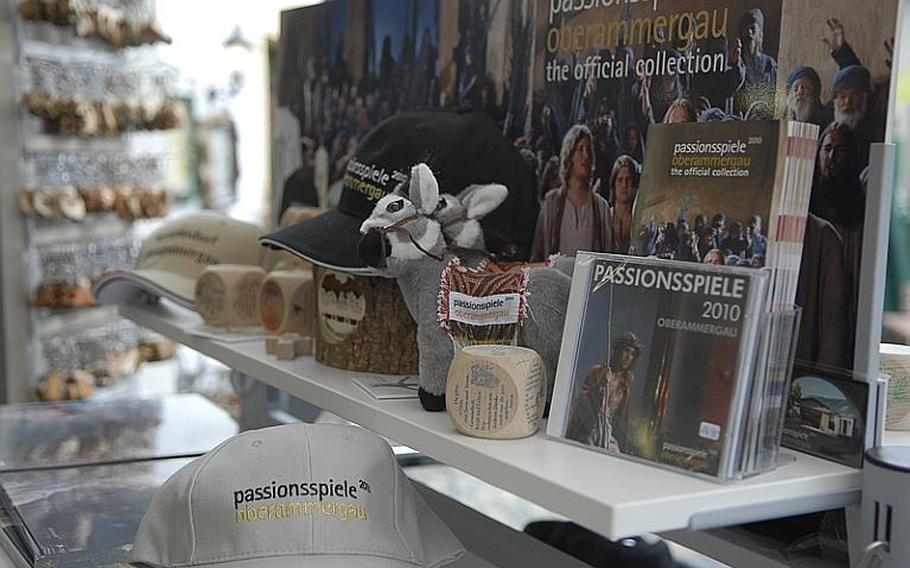 Buy Photo
The 2010 Oberammergau Passion Play is a religious drama, but it's also a commercial venture that floods the town of 5,000 every 10 years with milllions of eurso in revenue. Shopkeepers sell play souvenirs, and many keep their stores open late and on Sundays to benefit from the influx of tourists. (Jennifer H. Svan/Stars and Stripes) 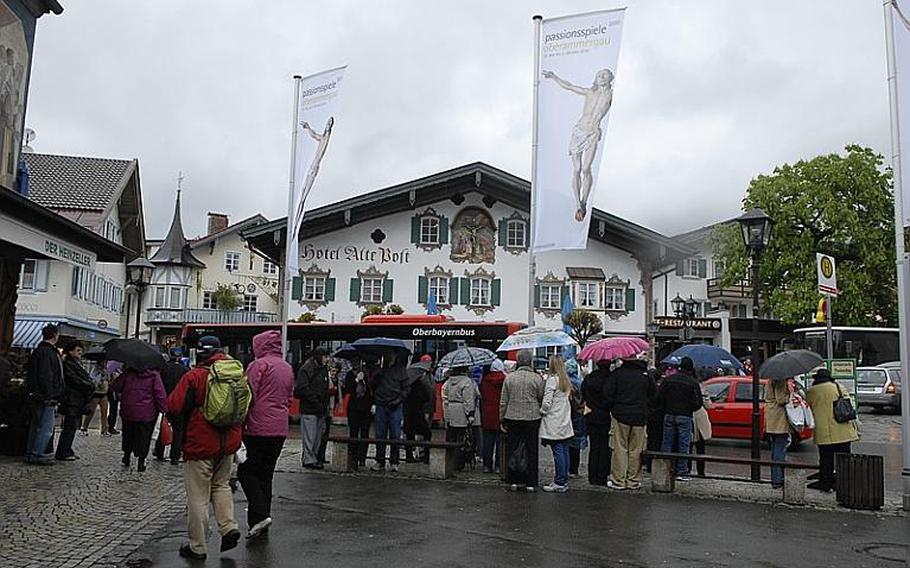 Buy Photo
Tourists in town to see the 2010 passion play keep Oberammergau bustling on a recent Sunday morning. The village will put on 102 performances of the play this summer and is expecting more than a half-million visitors from around the world to come see the once-in-a-decade staging of the play. (Jennifer H. Svan/Stars and Stripes) 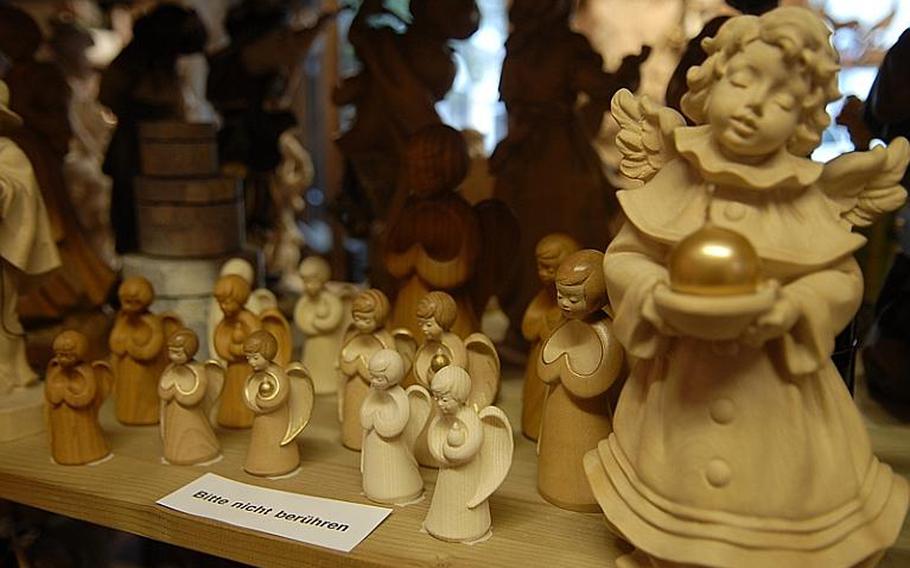 Buy Photo
Angels carved from wood sit on a store shelf in Oberammergau. The Bavarian town is well known for its wood carvings, as well as its religious drama, the once-in-a-decade passion play. (Jennifer H. Svan/Stars and Stripes) 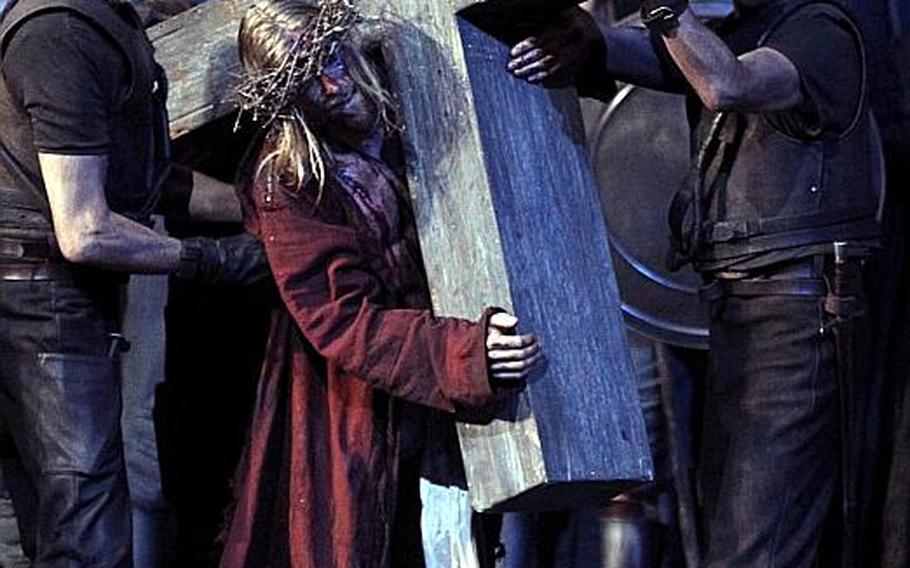 Andreas Richter portrays Jesus carrying his cross on the way to his crucifixion during a dress rehearsal of the passion play. (Matthias Schrader/AP) Andreas Richter portrays Jesus, center on donkey, during his Palm Sunday entry into Jerusalem during a dress rehearsal of the passion play. (Matthias Schrader/AP) 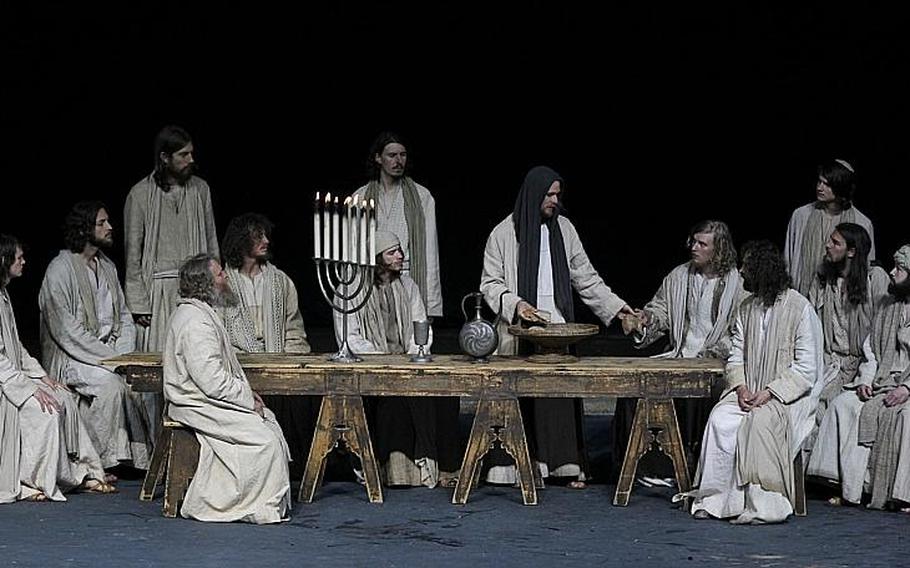 Frederik Mayet portrays Jesus, center, during the Last Supper during a dress rehearsal of the passion play. (Matthias Schrader/AP) Frederik Mayet portrays Jesus during his crucifixion during a dress rehearsal of the passion plays 2010 in the theatre of Oberammergau, southern Germany. More than 2000 citizens of this Bavarian village participate in the century-old play of the suffering of Christ, staged every ten years and dating back to 1634. (Matthias Schrader/AP) 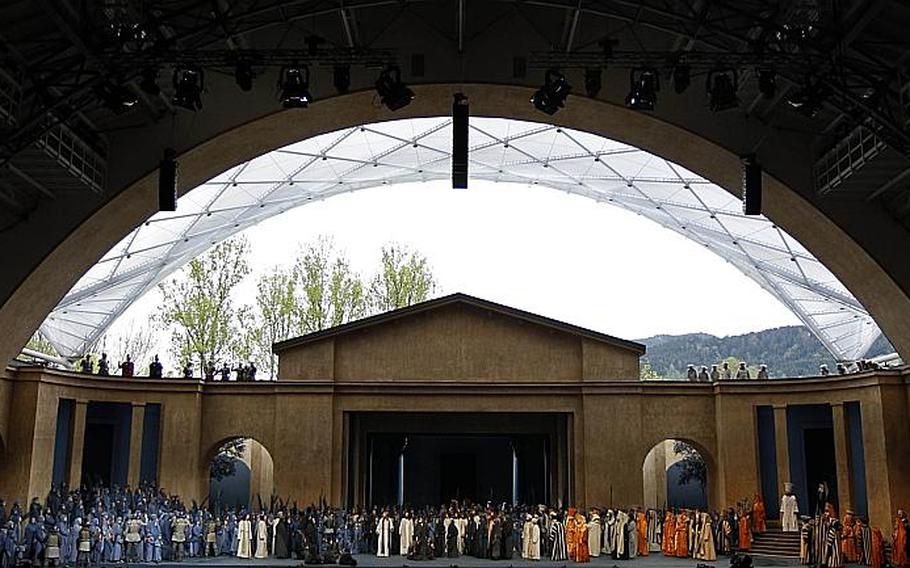 Residents of Oberammergau perform during a dress rehearsal of the passion play. (Matthias Schrader/AP)

Hippie locks and beards are in vogue these days among the men of the Bavarian village of Oberammergau, Germany.

In these parts, hair growing amuck on male villagers means but one thing: It&rsquo;s time to put on a passion play, an event that comes only once a decade.

A sold-out crowd of nearly 5,000 shivered under blankets during the 2010 premiere last month in an impressive community theater with a covered auditorium and an open-air stage. It was the first of 102 performances scheduled through the Oct. 3 finale.

With tickets still available, Americans stationed in Europe have the opportunity to see the world&rsquo;s most renowned retelling of Jesus Christ&rsquo;s final days.

&ldquo;It is absolutely the most famous, most influential passion play on the planet,&rdquo; said Rabbi Noam Marans, associate director of interreligious and intergroup relations at the American Jewish Committee in New York, and a passion play scholar. &ldquo;The passion play world looks to Oberammergau for its standard in passion plays.&rdquo;

The play is expected to draw about a half-million spectators, with many coming from the United States, organizers say.

The story line is familiar: In the opening act, a wise Jewish carpenter from Nazareth rides into Jerusalem on a donkey as an adoring mob waves palm leaves and shouts Hosanna! By nightfall at the theater, the tide of public sentiment has turned and Jesus is nailed to the cross in one of the play&rsquo;s most brutal scenes.

The ending &mdash; the resurrection of Christ &mdash; is also no surprise. But the 2010 version &mdash; the 41st staging of the passion play, which began as a vow made by villagers after surviving an outbreak of the Black Plague &mdash; is the most modern interpretation to date. Opinions on whether the changes stray too far from the intent and spirit of the Bible are as divided as Moses&rsquo; Red Sea.

Ludwig M&ouml;dl, a former theology professor in Munich, was appointed by the archbishop of Munich to act as a neutral adviser and watch over the play&rsquo;s content. He says this year&rsquo;s edition is "not too modern, but modern."

"Our task was to create a passion play for today&rsquo;s audience," he said. The four gospels of the New Testament are combined into one script with contemporary flourishes that almost create "a fifth testament," he said.

But the changes do not alter the play&rsquo;s message, which he says is "People should feel that even under conditions of suffering and death, there is hope for redemption and deliverance."

Among the contextual changes: Judas is portrayed as a more tragic figure instead of a money-thirsty traitor; Pontius Pilate wields a stronger hand; and Jesus&rsquo; Jewish roots are more clearly shown.

Visually, the costumes are all new. So is the set design, and special stage guests include two camels and a flock of doves. The musical score, composed in 1820, has also been revised.

While a concerted effort was made to expunge any lingering anti-Semitism from the play &mdash; once praised by Adolf Hitler for its unflattering portrayal of Jewish people &mdash; Jewish leaders say the adjustments don&rsquo;t go far enough.

Most disappointing is the scene in which Pilate offers to release Jesus and Jewish priests convince him not to let him go with the backing of an angry crowd, Marans said.

"A few are shouting for the release of Jesus but you really can&rsquo;t hear them," said Marans, who in May led a group of young American Jews to Oberammergau to see the play. "When you have a mob shouting on stage for his death, it mitigates any of the benefits of those lone voices because that is the lasting impression that you have at the end of the play."

Marans is pleased, however, by the unprecedented "clarity that Jesus was born, raised, taught and died as a Jew. If you clarify that it was a Jew who was killed, it mitigates the charge of a Jewish front to Christianity."

In his third time directing the passion play, director Christian St&uuml;ckl consulted with both Christian and Jewish organizations and scholars as he composed this year&rsquo;s script with assistant director Otto Huber. "I try to speak with everybody and bring all the people together," he said, while acknowledging it&rsquo;s nearly impossible to please everyone.

The play is told over 11 acts. Woven throughout are more than a dozen "living images" &mdash; motionless, vibrantly hued scenes from the Old Testament. It&rsquo;s long: 5&frac12; hours with a three-hour intermission. For the first time, the second half of the play is at night, in an attempt to stage Christ&rsquo;s crucifixion at dusk.

Frederik Mayet, a spokesman for the Munich Volkstheater, is one of two actors playing Jesus. Like most of the men in the play, with the exception of some of the actors playing Romans, Mayet has been growing his hair and a beard since Ash Wednesday a year ago.

Oberammergau-born St&uuml;ckl invited him to a general casting call, but Mayet wasn&rsquo;t expecting to land the part of Jesus, which he shares with 33-year-old psychologist Andreas Richter.

When the cast &mdash; which must be approved by the Oberammergau municipal council &mdash; is publicly announced, "you can say no," Mayet said, "but no one does."

Mayet, 30, is convincing in the biggest role of his life. With deep-set sad eyes, he plays Jesus with an unwavering intensity that makes one believe he carries the fate of humankind on his back.

Jesus demanded a lot, but his teachings are important and still relevant today, Mayet said.

"Love your enemy. If someone slaps you on the cheek, turn the other one," he said. "If everybody would live this way, the world would be better."

The play is spoken and sung in German, with a few lines in Hebrew. An English translation of the text, however, is available for non-German speakers.

The day after the premiere, English was the dominant language heard on the village&rsquo;s streets, as buses dropped off hordes of American tourists clutching cameras and umbrellas in the Oberammergau town square before the 2:30 p.m. show time.

The play inspired Indianapolis nurse Judy Noggle to take her first trip to Europe at age 67. She&rsquo;s intrigued by the play&rsquo;s history, the town&rsquo;s commitment to it, and the desperate promise "the villagers made to God, that if he saved them from the plague, they would tell this story."

"It&rsquo;s true," says Oberammergau native Hannelore Graves, 69, who as a child played an angel in the play. "We made a vow that if the plague would stop, we would rehearse the life of Christ every 10 years &mdash; and it stopped."

And, what&rsquo;s more, locals like to say that no town residents die during a run of the passion play, said native Ina Lang, 66.

"No, because you don&rsquo;t have time to die," Graves said.

Graves was speaking tongue-in-cheek &mdash; sort of. It literally takes a village to put on this play. About 2,400 inhabitants, culled from a population of 5,000, have roles, from disciple to temple guard, and tradition dictates that every actor either must have been born in Oberammergau or lived in the village for at least 20 years. Many balance day jobs with their stage roles.

The end result is a memorable performance that everyone is eager to see. Well, almost everyone.

At intermission on the play&rsquo;s opening day, director St&uuml;ckl took cover from the rain under a cafe awning, juggling a cup of coffee and a cigarette.

After rehearsing since November, and months more of preparation, his nerves are shot: "I couldn&rsquo;t look at the play today," he said. Then he disappeared into the crowd gathering outside the theater.