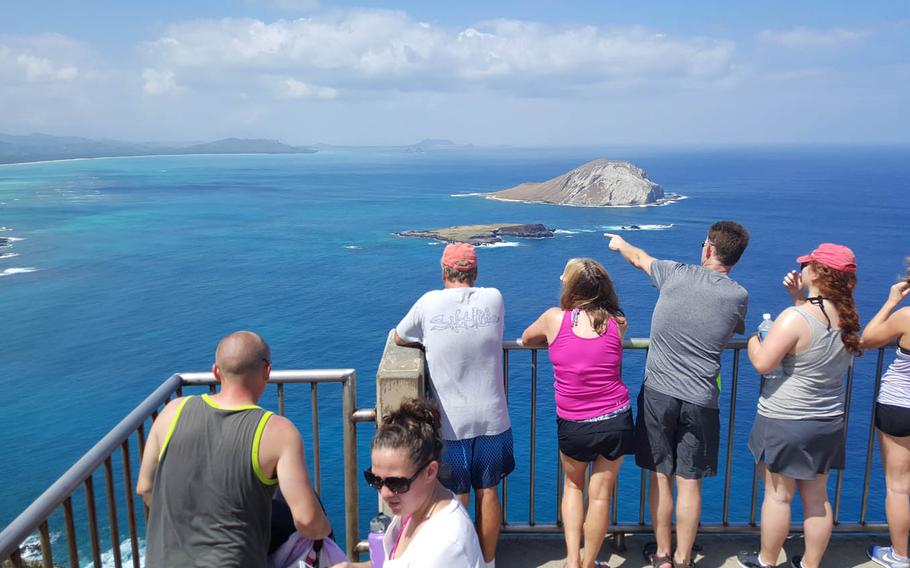 Hikers in Hawaii view islands and whales after reaching the paved summit of the Makapu'u Lighthouse Trail on Oahu. Rocky paths lead to higher elevations. (Wyatt Olson/Stars and Stripes)

Hikers in Hawaii view islands and whales after reaching the paved summit of the Makapu'u Lighthouse Trail on Oahu. Rocky paths lead to higher elevations. (Wyatt Olson/Stars and Stripes) More adventurous types can hike down a steep Hawaiian hillside trail for a swim in tide pools at Makapu'u Point Lighthouse Trail and Dragon's Nostrils on Oahu. (Wyatt Olson/Stars and Stripes) 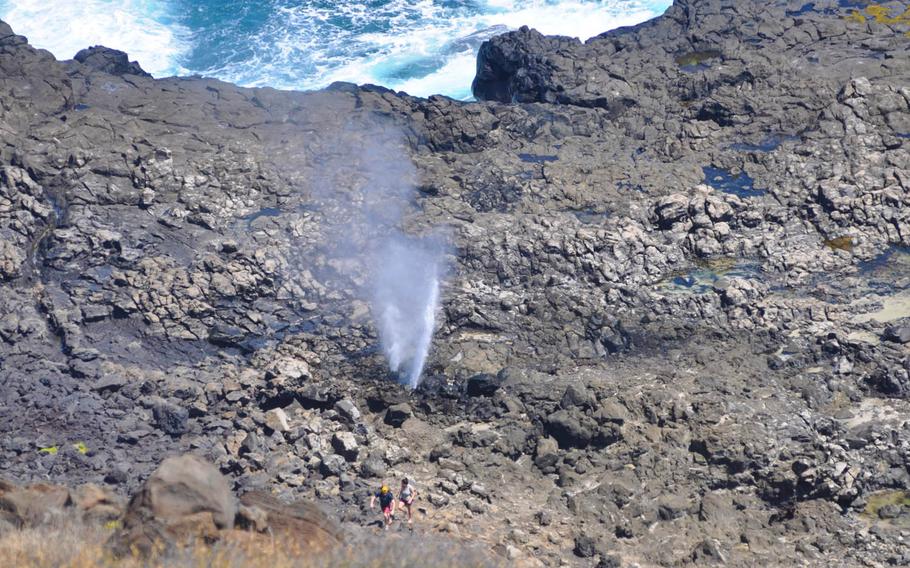 Makapu'u Point Lighthouse Trail and Dragon's Nostrils on Oahu are convenient for strollers, so it's OK to bring kids on the two-mile roundtrip. (Wyatt Olson/Stars and Stripes) The lighthouse trail has many side paths that can lead to a private moment in the sun. Bring your own refreshment; there's nothing available on the trail. (Wyatt Olson/Stars and Stripes) 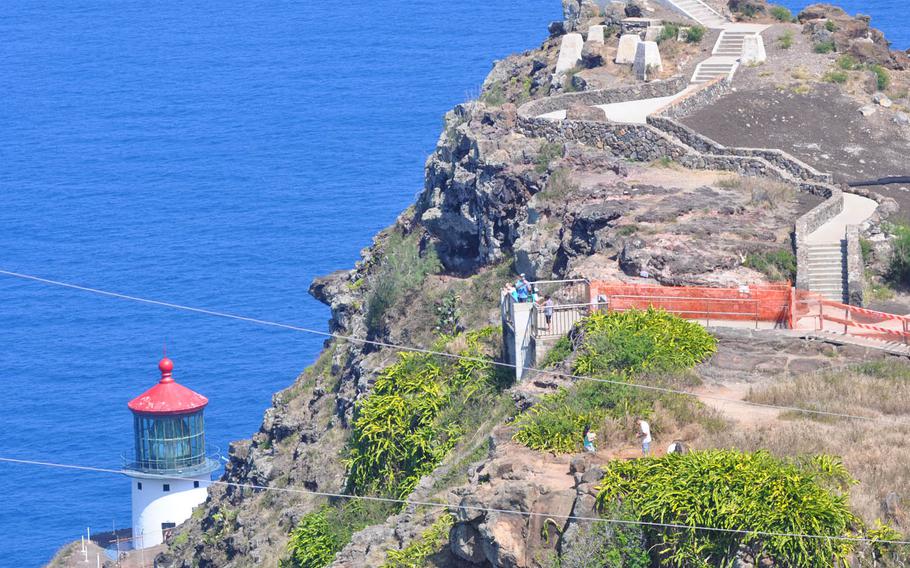 Makapu'u Point Lighthouse Trail sits at the end of the Oahu hike and can be seen from a couple of vantage points. Construction is underway on a flight of concrete stairs that will lead to a viewing area directly over the lighthouse. (Wyatt Olson/Stars and Stripes) 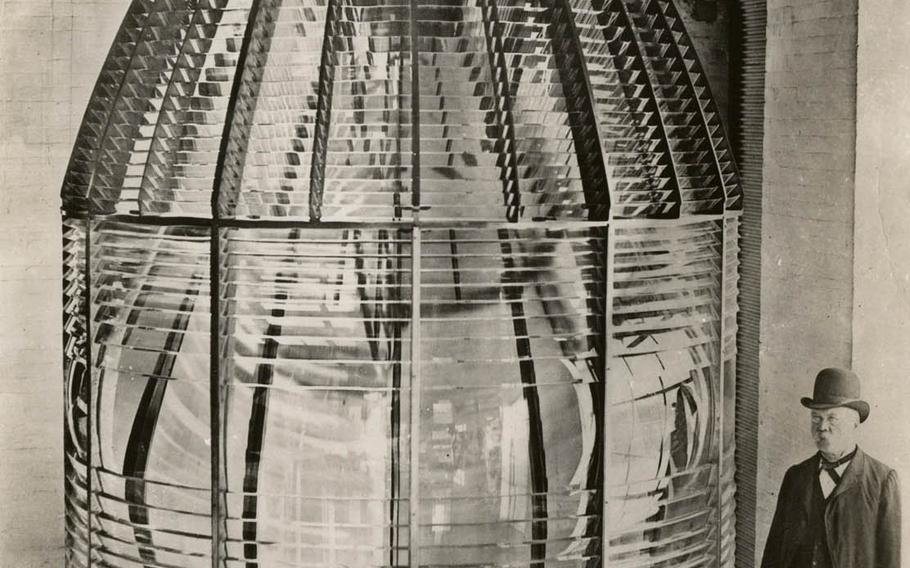 A man stands next to the world's largest lighthouse lens, used at Makapu'u Point Lighthouse, in this undated photograph. (Courtesy of the U.S. Coast Guard)

If you’re looking for a hike on Oahu that’s more exhilarating than exhausting, Makapu’u Point Lighthouse Trail is waiting for you.

Along the way, you’ll see humpback whales, a world-famous lighthouse, World War II-era artifacts and the nostrils of a dragon.

The two-mile trail — one up, one down — is paved, making it convenient for joggers and anyone pushing a stroller. The trail’s grade up the roughly 500-foot elevation is gradual, with several viewing areas for resting and viewing, along with placards explaining the area’s history and geology.

The trail, part of the Kaiwi State Scenic Shoreline, is on Oahu’s most southeastern point, and the top provides a view of that oh-so-scenic coast.

About three-quarters to the top is a lookout platform with three free-to-use swivel binoculars for watching humpback whales as they bob and weave through the waters below. Whales are active around the Hawaiian islands from November to May, but their activity varies by time of day, weather and tide.

I’ve been on this trail at times when the whales’ movement makes the water look carbonated. Other times, I’ve had to concentrate on a single area for minutes at a time to see anything at all.

Bring your own binoculars or a camera with a telephoto lens, because there are numerous spots along the trail for whale watching.

You’ll also want that magnification for the famed Dragon’s Nostrils, which can be seen from the same viewing platform.

Side-by-side blowholes in a lava rock shelf below periodically blast water 20-30 feet into the air when the tide comes in at the right time and strength. Again, the weather and tide will dictate how spectacular the geyser will be. The windier the day, the better your chances, but even on the calmest days the dragon will breathe if you wait long enough.

More adventurous hikers make their way off the main trail down a steep, weaving path to the lava shelf below. One attraction is, obviously, a closer look at the Dragon’s Nostrils. But there are also several tide pools to soak in down there. The hike down takes 20 to 45 minutes, depending upon ability and physical condition, and a bit longer climbing back out.

Most hikers are content to look from above and then continue on to the trail’s end. There you’ll find the Makapu’u Lighthouse, which boasts the world’s largest lighthouse lens, the Coast Guard says. Its beam can be seen from about 20 miles away, and the lens has more than 1,000 prisms and stands 12 feet wide and 8 feet tall.

Built in 1909, the lighthouse became fully automated in 1974. There’s no direct access to it from the trail, but on a daytime hike you’ll see its bright-red roof contrasted by the deep blue of the ocean. The lighthouse can be seen from several vantage points near where the paved trail terminates, offering the chance for hard-to-disappoint photos.

Construction is underway to continue the pavement to a much higher viewing platform that will directly overlook the lighthouse.

On several peaks in the area stand concrete bunkers built during World War II. Several are collapsing, and signs warn visitors to stay out, but they are a reminder that a few generations ago, making the trek up to Makapu’u Point was for anything but fun.

To reach Makapu’u Point Lighthouse Trail from Waikiki Beach, head east on Interstate H-1, which morphs into Kalanianaole Highway, also called Route 72. Stay on this coastline road for about 12 miles. About a half mile past the entrance to Hawaii Kai Golf Course is the driveway to the trailhead to the right, but there’s no signage. Look for many cars parked along a side road running beside a steep hillside. Park amongst them or on the main road, and walk toward the hillside, where the trail begins.

Bring all the food and beverages you’ll need for yourself and any dogs on leashes for about a two hour walk, because there’s nothing available nearby or on the trail.