British attorney Vaughn Fullagar brought two vintage race cars, including this A.C. Cobra, and several motorcycles from his home in Swindon, England. He even offered to lend others a vehicle. (Terry Boyd / S&S) 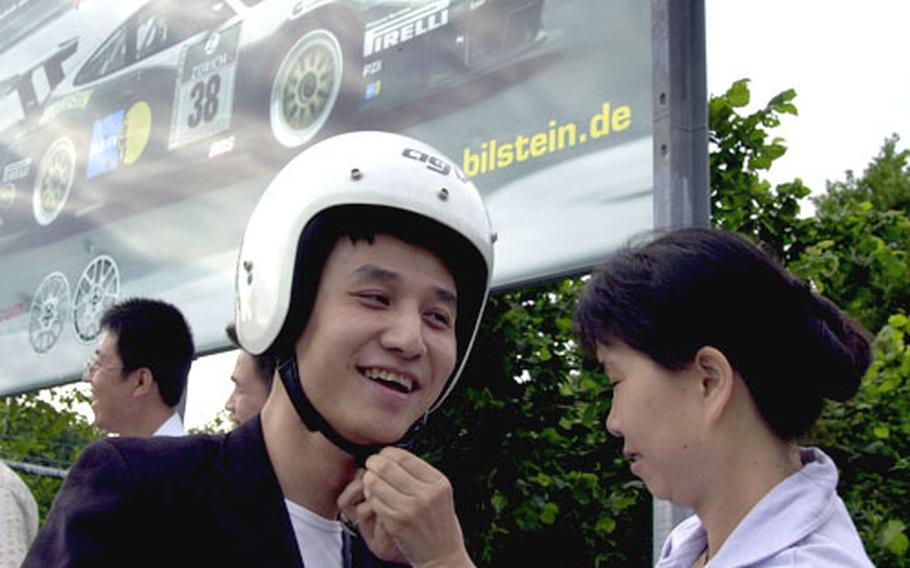 A Porsche Carrera 4 slices through a turn at Nürburgring, Germany. Anyone with a fast car and 16 euros can have a go. (Courtesy of Nürburgring race track) 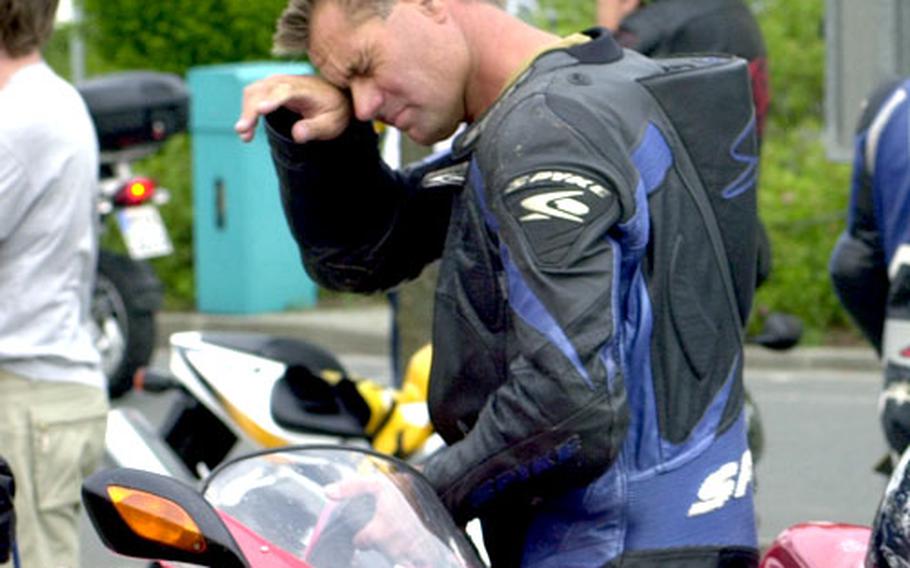 A German motorcycle racer looks fatigued after torrid laps around the long track, which has endless twists and turns, but only two straights. (Terry Boyd / S&S)

My first reaction was that I surely must have misheard what the comely, dark-haired, leather-clad woman was offering.

&ldquo;Would you like to take one of Vaughn&rsquo;s cars for a drive around the track?&rdquo; Gillian Marshall smiled knowingly, awaiting an answer to the most stunningly generous question anyone has ever asked me.

There&rsquo;s something about roaring around N&uuml;rburgring&rsquo;s 20.8-kilometer, 100-turn course that seems to put people in absurdly good moods. Near rapture, I&rsquo;d say. Every driver and motorcyclist coming off the track was all smiles, even stoic Germans.

Marshall was tempting me to choose between her partner&rsquo;s rare 1960s vintage A.C. Cobra, worth roughly five times my annual salary, or his slightly less valuable Lotus 7 roadster for a dash around the N&uuml;rburgring racetrack.

&ldquo;Vaughn,&rdquo; I said, &ldquo;you lend your cars to people to drive around a racetrack?&rdquo;

&ldquo;You only have one life, Terry,&rdquo; said British attorney Vaughn Fullagar. &ldquo;You&rsquo;ve wasted it if you can&rsquo;t bring a little happiness to others.&rdquo;

Much as I would have liked, I couldn&rsquo;t accept their kind offer without jeopardizing my children&rsquo;s college funds.

The Nordschleife course at N&uuml;rburgring in Germany is the only place where you can pull up in your car &mdash; any street-legal car that will do more than 60 kilometers per hour &mdash; fork over 16 euros per lap, then blast around one of the most historic auto racing venues on the planet.

The most famous names in auto racing, from Fangio to Andretti, came to the N&uuml;rburgring &mdash; with a certain amount of dread. It was so long, so beautiful and so dangerous that Jackie Stewart dubbed it the &ldquo;green hell.&rdquo; The Formula One race is no longer held here, but the course has been open since 1927 for touristenfahrten, allowing anyone to take a lap.

&ldquo;There&rsquo;s nothing like this in England,&rdquo; Marshall said. &ldquo;We have all these restrictions on noise, safety. If we had something like this, it would be super. But England is too stuffy.&rdquo;

This is an American liability lawyer&rsquo;s worst nightmare. After all, &ldquo;died at N&uuml;rburg- ring&rdquo; is the final line in a lot of famous racers&rsquo; biographies, as well as the end of the road for more than a few people who get on the track.

Everyone vows they&rsquo;ll do a couple of careful warm-up laps, but few ever do, said Ken Towery, an American working in England. &ldquo;You get on the track, and the red curtain descends!&rdquo; he said, using a euphemism for the irresistible urge to pass everything in sight.

Sue Smyth was hanging on for dear life behind Stephen Petria as Petria jinxed his Aprilia RSV through swarms of vehicles at speeds reaching 120 miles per hour.

And there&rsquo;s the rub. Most come having already spent beaucoup bucks (euros or pounds) on their rides, fishing lap fees out of their Ricardo racing seats. Everywhere you look, there are not just cars, but millions of dollars&rsquo; worth of super cars.

Still, there&rsquo;s nothing to stop you from showing up in your 12-year-old beater and letting &rsquo;er rip.

The better you know the track, the faster you go, said Dave Robley, an amateur British motorcycle racer.

The catch is, N&uuml;rburgring is too long to memorize, Robley said: &ldquo;It&rsquo;s so long, you&rsquo;ll never get your head around it!&rdquo;

On the QT ...GETTING THERE: Getting to the N&uuml;rburgring is half the fun; it&rsquo;s one of the most scenic drives in Germany no matter which route you take. But the track&rsquo;s remote location in the Eifel area west of Koblenz makes getting there a challenge. From the Kaiserslautern/Ramstein/Baumholder area, take Autobahn 62 toward Trier, then follow the signs for Autobahn 48 toward Koblenz. At the Ulmen exit, follow B-259 toward Kelberg, then follow the signs to N&uuml;rburg. Once you get to the main track area, ask for directions to the touristenfahrten area, which is toward Adenau.

From Frankfurt, take Autobahn 61 to Koblenz, then look for signs to Mayen. From Mayen, there are signs to N&uuml;rburgring. Coming out of Dottlingen, the last town before N&uuml;rburg, you&rsquo;ll drive about one kilometer (less than a mile) before you see a yellow sign on your right that reads &ldquo;Adenau, 6 KM.&rdquo; Turn there, go under the viaduct, then take the next left and drive 1.5 kilometers. That will put you right in the traffic circle for the touristenfahrten entrance.

But there are often events and races that close the track, so consult the track Web site.

COST: Drivers buy lap tickets at a vending machine. The more you buy, the cheaper the cost per lap, which is the same for cars and motorcycles: