Noordwijk to Haarlem: Flowers go on parade in Holland 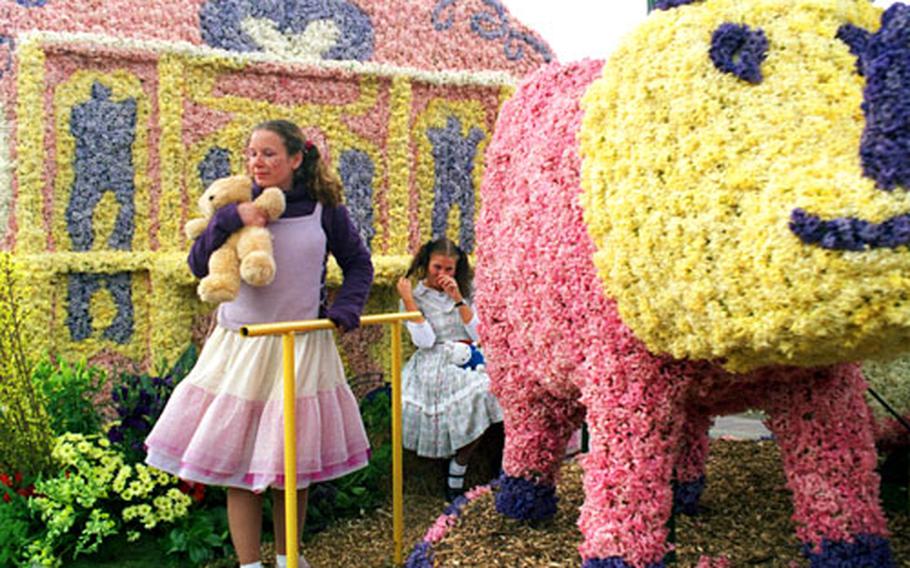 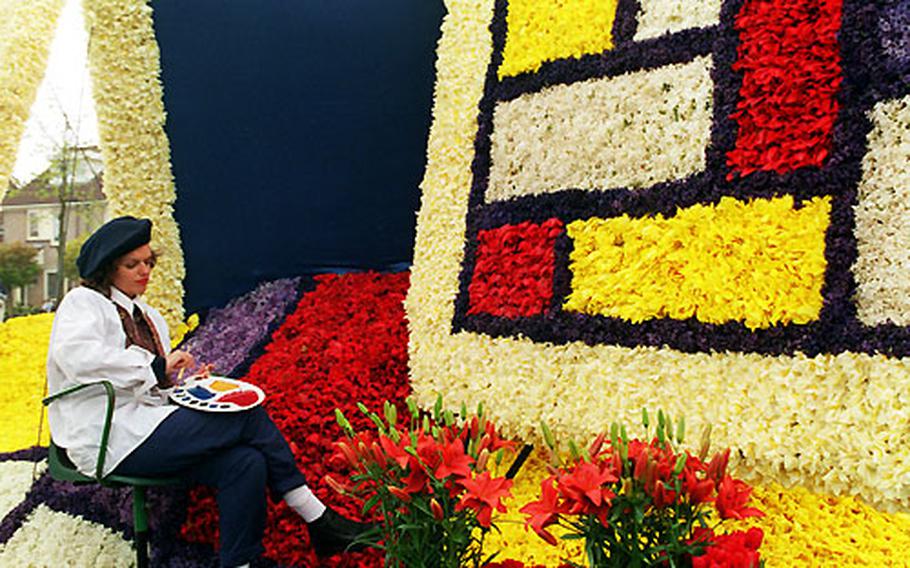 On a float, an artist acts like the Dutch painter Piet Mondrian in front of one of his canvases. Mondrian was famous for his paintings in the three basics colors, separated by stark black lines. (Peter Jaeger / S&S) 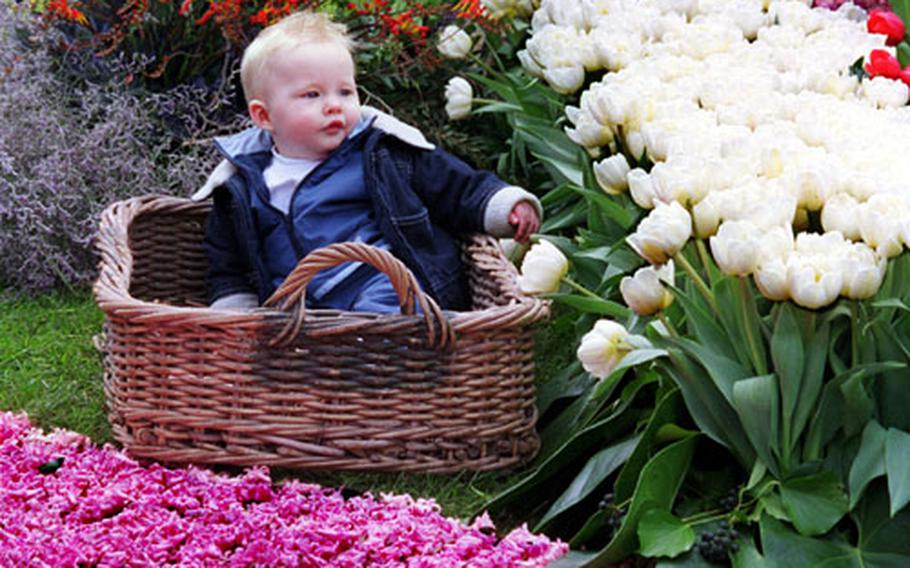 Stranded between tulips and hyacinths like Moses in his basket, a youngster looks out at the surrounding crowds. (Peter Jaeger / S&S) 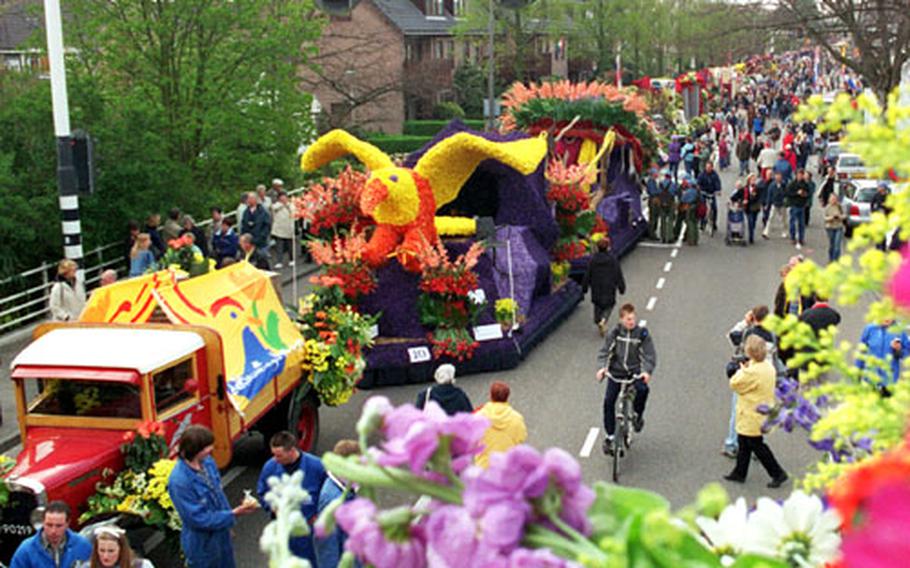 The flower parade takes a break for 90 minutes on the outskirts of Sassenheim. Spectators use the opportunity to get a close-up look at the flowers and take souvenir photos. (Peter Jaeger / S&S) 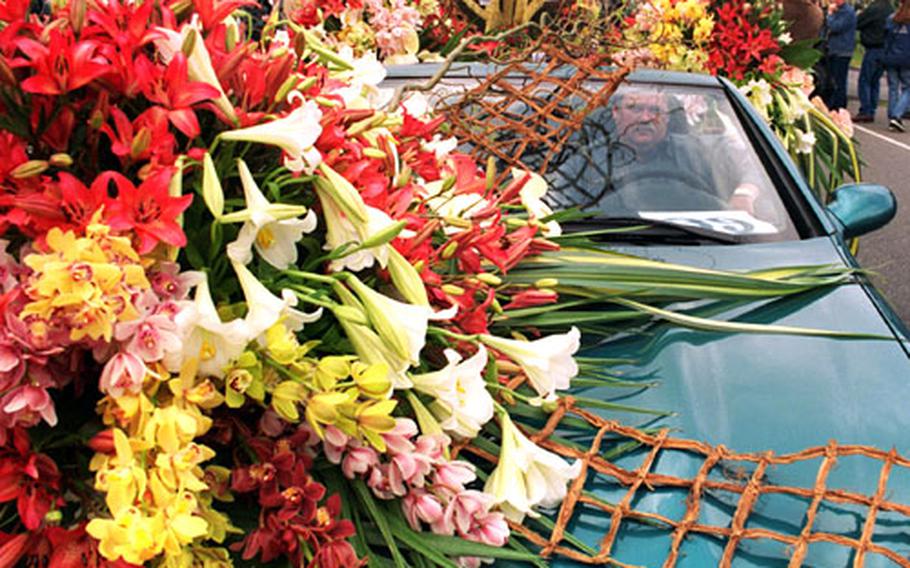 One of the many private cars in the parade is showered with lilies and orchids. (Peter Jaeger / S&S)

The beasts and the birds were there. Artists and composers showed their creations. Fancy buildings and huge ornaments vied for attention. An exhibition of forms, a symphony of colors composed of millions of flowers. All on large wheeled floats, traveling the flats of Holland between Leiden and Haarlem. Every April the &ldquo;Bloemencorso van de Bollenstreek,&rdquo; the flower parade in the heart of the flower-bulb region, is one of the top five tourist attractions of the Netherlands.

Thousands of locals and visitors watch the parade as it travels through flower fields and tiny villages every year. But don&rsquo;t be concerned about the crowds &mdash; there is plenty of space to enjoy the spectacle on its 25-mile voyage between Nordwijk aan Zee and Haarlem.

The parade is composed of 20 large floats and many privately owned luxury cars covered with flowers and greenery. Marching bands between the floats add to the festivities.

The towns the parade passes through show their Sunday best, decorating their streets and squares with flags and flowers. Houses and yards, cars and bicycles, kids and dogs are covered in the colors of spring as the locals put on their private show to make the flower parade a lasting success.

The parade takes two 90-minute breaks during the day: At 12:30 p.m. at Sassenheim and at 5 p.m. at Bennebroek. This is an excellent occasion for flower buffs and shutterbugs to feed their hobby by soaking up the variety of color schemes and photographing close-ups of tulips, hyacinths and roses.

This is also the time to pay tribute to the several hundred helpers who assembled the floats with millions of flowers, creating a moving masterpiece of color.

This year the Netherlands&rsquo; 56th annual flower parade is April 26. It will leave Noordwijk at 9:30 a.m. to cover its 25-mile course toward Haarlem, which it will reach at about 8:30 p.m.

Then, the illuminated floats will be on exhibit in the center of town on Gedemte Oude Gracht until the following day.

Visitors who want to watch the floats being built can do so on April 24 from 12 noon until 11 p.m. at Hobaho Halls in Lisse at Haven 10. On April 25, from 10 a.m. to noon the floats are displayed at the same hall.

In the evening, a flower festival with music, artists and a lottery will be held.

The entrance fee for the exhibition on April 24-25 is 4 euros. The flower festival costs 7 euros, with group discounts for 20 or more people.

Word of advice: It is best to watch the parade in the morning or around noon when participants are fresh and active and the light is bright to highlight the colors.

I recommend the towns of Nordwijk, Voothut, Sassenheim and Lisse. When the parade reaches Haarlem, parts of it may be missing or participants have dropped out.

Beware of Lisse: Many tour buses drop visitors at the nearby Keukenhof flower show, the main steady attraction in the area, and then take them to the parade route near Lisse. When the parade passes, there are great traffic jams caused by everyone tying to leave at the same time. It is better to wait in a local pub or caf&eacute; and wait until the crowd passes.