Neustadt: Like wine? Then raise a glass in German city 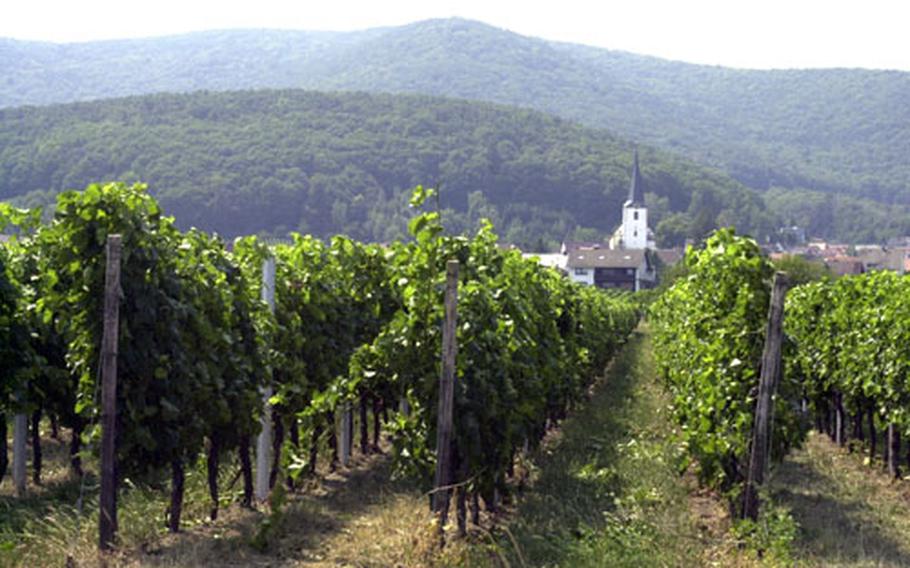 A vineyard just outside the town of Neustadt an der Weinstrasse produces one of the things for which the town is famous. (Scott Schonauer / S&S)

A vineyard just outside the town of Neustadt an der Weinstrasse produces one of the things for which the town is famous. (Scott Schonauer / S&S) A view down the narrow Metzergasse street in Neustadt an der Weinstrasse. The medieval alley leading from the Marktplatz has the oldest half-timbered house in Rheinland Pfalz. (Scott Schonauer / S&S) 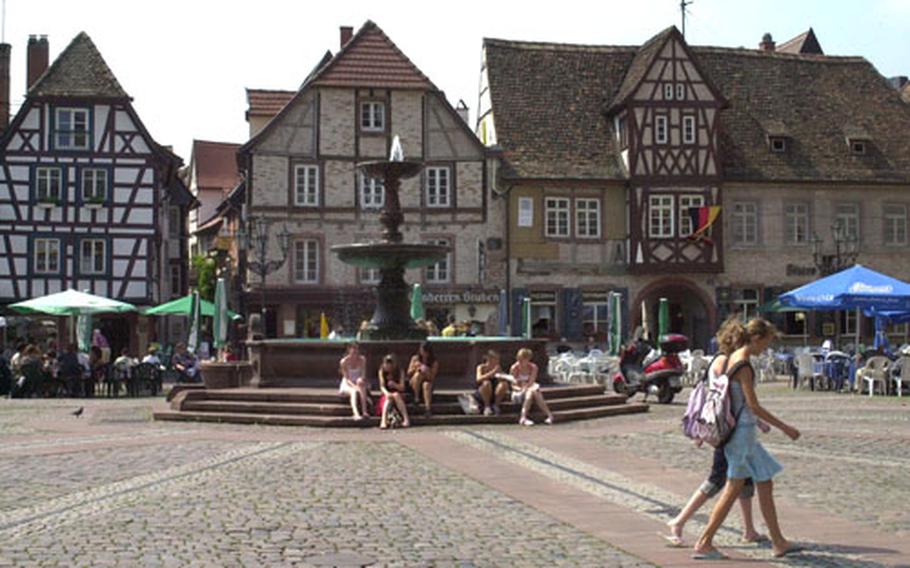 The Marktplatz is in the historic center of Neustadt an der Weinstrasse. On Tuesdays, Thursdays and Saturdays, vendors gather in the square to sell fresh fruits and vegetables. (Scott Schonauer / S&S)

But naming the town the &ldquo;secret wine capital of Germany&rdquo; might be more fitting.

Above all else, the village has wine.

The town is at the midway point of Germany&rsquo;s wine route, the Deutsche Weinstrasse, and is surrounded by rolling hills of vineyards. There are more than 5,000 acres of vineyards, which produce 20 million bottles of wine annually, according to the city&rsquo;s tourist office.

That&rsquo;s enough wine for a glass for every German citizen every day.

A good way to get to Neustadt is by taking the train and then walking into the town, especially if you plan to sample the best the city has to offer in its handful of old wine taverns or in the nearby vineyards.

Begin the day at the Marktplatz, the heart of the historic center. Several bistros with outdoor tables offer views of the Gothic Stiftskirch, the 18th-century town hall and a Renaissance-style building built in 1580 called the Scheffelhaus.

Tuesdays, Thursdays and Saturdays are market days, when vendors roll out fresh fruits and vegetables for sale. In the winter, the Marktplatz is the scene of the town&rsquo;s annual Christmas market.

Shops and boutiques line the pedestrian area and offer a large selection of fashionable clothes that is impressive for a town of around 56,000.

Neustadt&rsquo;s biggest landmark is a 500- year-old church that boasts the largest cast- iron church bell in the world.

But let&rsquo;s face it: Most visitors do not come for the big bell.

They come for places like the Haus des Weines, where customers can try the area&rsquo;s wine in a restored building built in 1276.

If that&rsquo;s not enough, walk along Mittelgasse and Hintergasse and sip wine in the many wine taverns. Twisted grape vines line the building walls and doorways of some of the bars and restaurants that populate the quiet alleyways.

Yet even more wine can be sampled in the nine sleepy, wine-growing hamlets that surround Neustadt.

Other sites to see:

The Eisenbahnmuseum: The museum, which is adjacent to the train station, is a tribute to a collection of historic steam trains. It offers train rides on special occasions.Hambach Castle: Just outside town in the village of Hambach, the castle is considered Germany&rsquo;s &ldquo;Monument to Democracy.&rdquo; On May 27, 1832, demonstrators marched up the hill to the castle and demanded human rights and democracy. President Reagan gave a speech at the castle during a visit in the 1980s.The Elwedritsche fountain: A fountain in the center of town that features smiling, fairy-tale-like creatures that are half-bird, half-animal.On the QTDIRECTIONS: Neustadt an der Weinstrasse is about 21 miles from Kaiserslautern. From Kaiserslautern, take A6 west toward Mannheim. Get off at the exit marked Neustadt an der Weinstrasse, and follow B48 south to B37. Turn left onto B37, take it to the intersection with B39 in Frankenstein, and then follow B39 into Neustadt.

TIMES: Guided tours of the town are given from April to the middle of November each Wednesday and Saturday at 10:30 a.m. The tours begin at the tourist office. The Eisenbahnmuseum is open 10 a.m. to 1 p.m. Tuesday through Friday and 10 a.m. to 4 p.m. on Saturdays, Sundays and holidays.

COSTS: Check with the tourist office for tour prices. Entry to the Eisenbahnmuseum is 3 euros for adults, 1 euro for ages 4-16.

FOOD: Regional specialties and international cuisine at restaurants and taverns throughout the town. Be sure to try some local wine with your food.