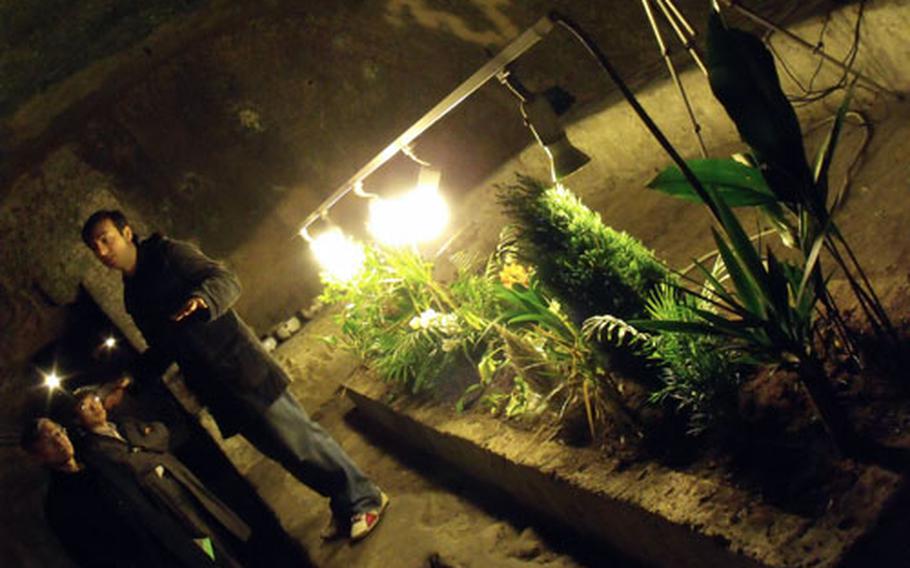 An experimental botanical garden, started in Naples’ underground about 15 years ago, requires no care other than the grow lamps. With 80 percent humidity in the city’s bowels, the plants need no watering. (Sandra Jontz / S&S)

An experimental botanical garden, started in Naples’ underground about 15 years ago, requires no care other than the grow lamps. With 80 percent humidity in the city’s bowels, the plants need no watering. (Sandra Jontz / S&S) 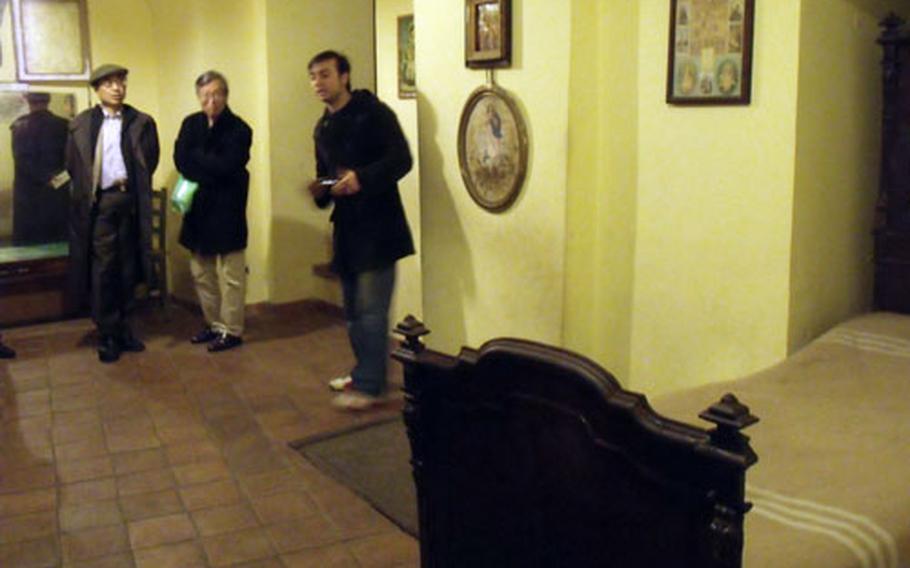 The tour begins in a small apartment. Underneath the twin bed lies a narrow staircase to the passageways that lead nearly 150 feet below the city&#39;s surface to an ancient Roman theater that is part of the Naples underground tour. (Sandra Jontz / S&S) 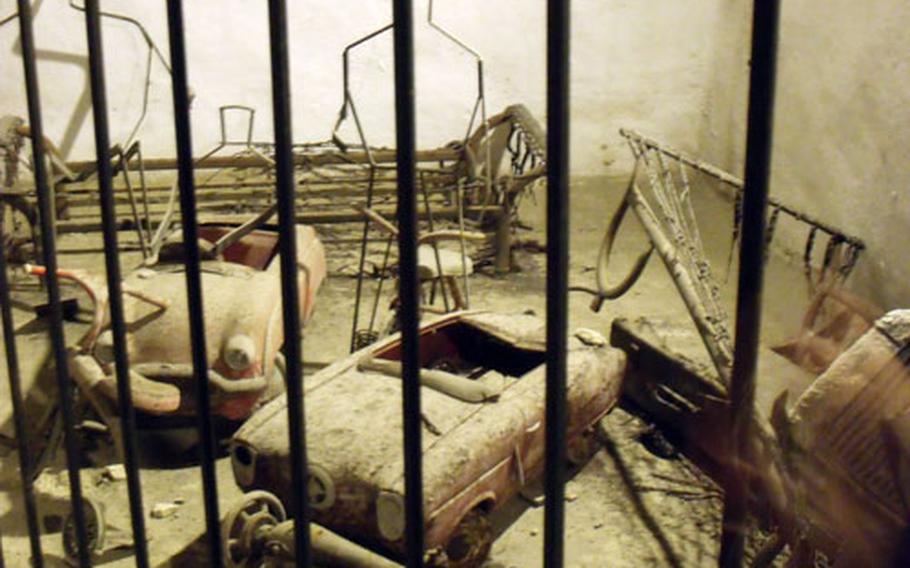 An exhibit of toy cars, a sewing machine, a tricycle and simple furniture gives visitors on a tour of the Naples underground an idea of what life might have been like for some Neapolitans who fled to the tunnels of the underground for safety during the bombing raids in World War II. (Sandra Jontz / S&S) 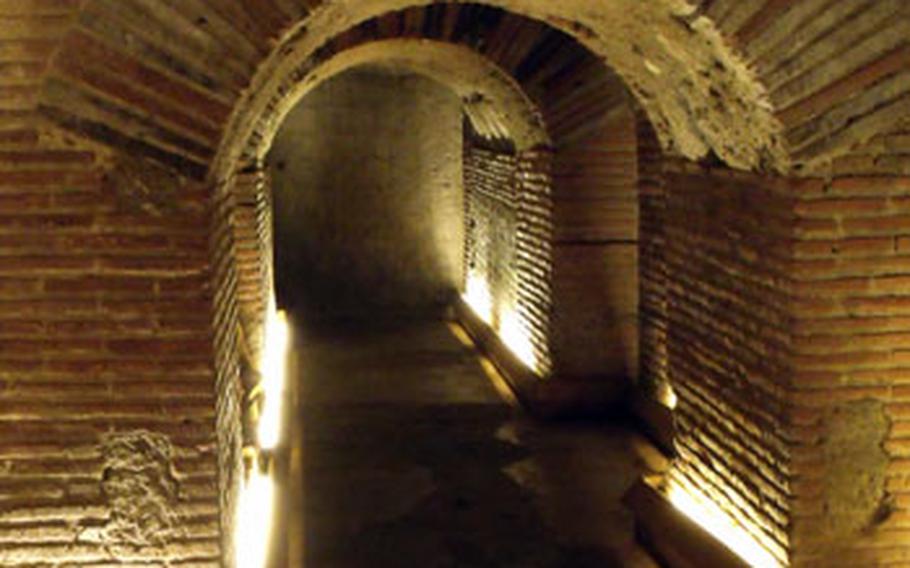 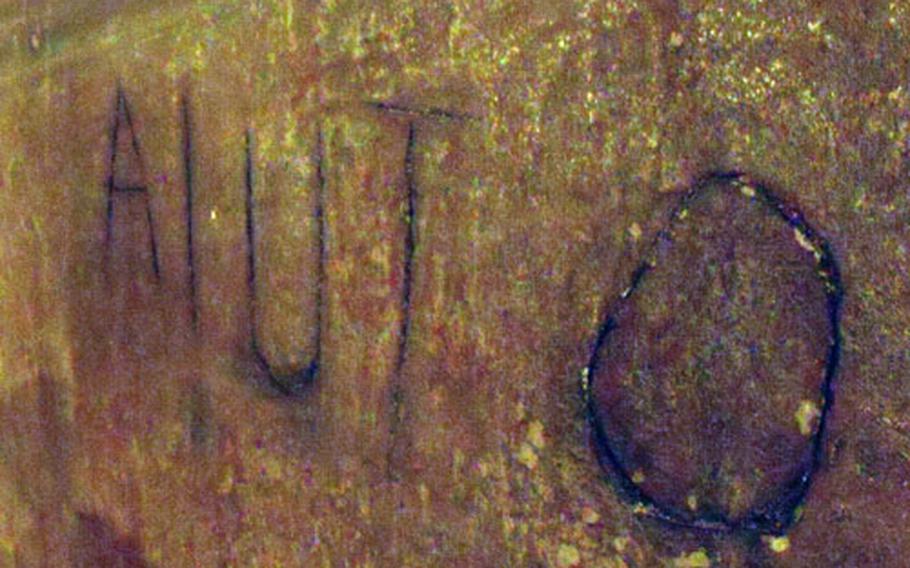 "Aiuto," Italian for "help," was scribbled on the wall in the catacombs underneath Naples during the World War II bombing. (Sandra Jontz / S&S)

Notwithstanding an Italian adage that calls for yet another 40 days of rain if it rains on April 4 (which it did this year &mdash; it sprinkled in the southern part of the peninsula and poured up north), the historic downtown areas of Naples beckons to spring revelers.

However, if April showers dampen above-ground activities, there&rsquo;s a great escape that will keep you dry in the bowels of the ancient city, nearly 150 feet beneath the city streets &mdash; Naples&rsquo; underground.

Archaeologists have excavated the area, uncovering remnants of civilizations, including one of cave dwellers that dates back 5,000 years. The remains can be viewed by visitors during organized tours.

Early settlers of this city, which the Greeks called Neapolis, or new city, took blocks of tufa stone from quarries around the caves to build the city walls. Later, during the period called the Augustan Age, the time around the birth of Christ when Caesar Augustus ruled as the first emperor, Romans continued the digging and building. Among their projects were underground tunnels and a 250-mile aqueduct, parts of which were used up to the early 1900s.

The first leg of a two-part tour, which lasts 90 minutes in total, plunges visitors into the depths below Italy&rsquo;s third-largest city by starting in a typically tiny Neapolitan apartment. Up until about three decades ago, the cozy one-bedroom, first-floor abode actually was occupied by an elderly couple, who had no idea that the narrow stairs they descended to their pantry and wine cellar led to a buried ancient Roman theater, a guide says.

A swift push of the twin bed across a well-grooved floor and into a pre-carved cranny reveals the opening to a staircase that leads to a walled part of the Roman theater that archaeologists estimate held about 6,000 spectators.

Roman Emperor Nero is said to have performed at this hidden theater.

And what has now been determined to be the theater&rsquo;s east entrance, up until about just 15 years ago, used to house a modern-day motorcycle repair garage. Who knew?

Upon leaving the narrow, nearly claustrophobic passageways of the theater, which archaeologists believe thespians used to access the stage, visitors began the second part of the tour by descending a separate set of steps &mdash; 122 in all (which, yes, you must then ascend) &mdash; to access the underground&rsquo;s catacombs, aqueducts and more tiny corridors.

These are the same catacombs that provided shelter for Neapolitans during the bombing raids of World War II. The Association Napoli Sotterranea has erected displays along the trail to depict how refuge-seekers lived and survived during the ordeal &mdash; a toy tricycle is in one display, while another shows figures donning gas masks.

Visitors will also see a unique underground botanical experiment in full bloom. It was started about 15 years ago to see if plant life can be sustained underground. It can. With roughly an 80 percent humidity level, the plants manage to survive on their own, without needing to be watered, but do require the assistance of grow lamps to flourish, the guide said.

Know and go ...DIRECTIONS: The best way to reach the tour&rsquo;s starting point is by subway, getting off at the Piazza Cavour station. On foot, head down Via Duomo to Via Tribunali to Piazza San Gaetano. The entrance is on the right at No. 68.

TIMES: Tours in English start at noon Monday through Friday, and at 10 a.m. on the weekends. They are conducted every two hours, ending at 4 p.m. during the weekdays, except Thursday, when there is a 9 p.m. tour. The last weekend tour starts at 6 p.m. Groups and schools can book trips outside the regular times.

COSTS: Fee for the tour is 9.30 euros; the underground can be visited by tours only.

FOOD: There is no restaurant on site, but there is a wide variety in the area.

MORE INFORMATION: The underground has a very good Web site, www.napolisotterranea.org;it is in seven languages including English. The Web site advises visitors to carry a sweater, even on warm days.