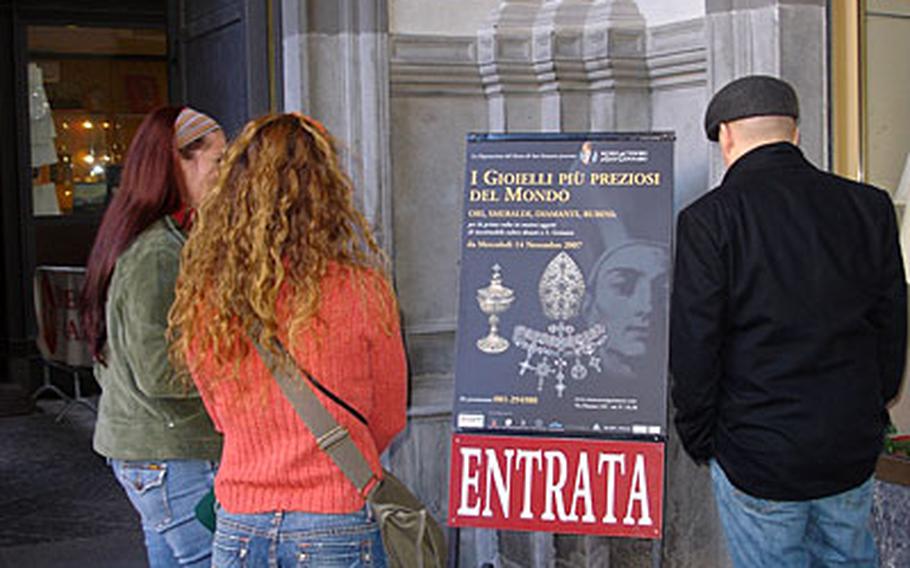 Three American visitors prepare to visit the special exhibit of the treasures of San Gennaro on display in a building attached to the cathedral in downtown Naples. (Lisa M. Novak / S&S)

Three American visitors prepare to visit the special exhibit of the treasures of San Gennaro on display in a building attached to the cathedral in downtown Naples. (Lisa M. Novak / S&S) 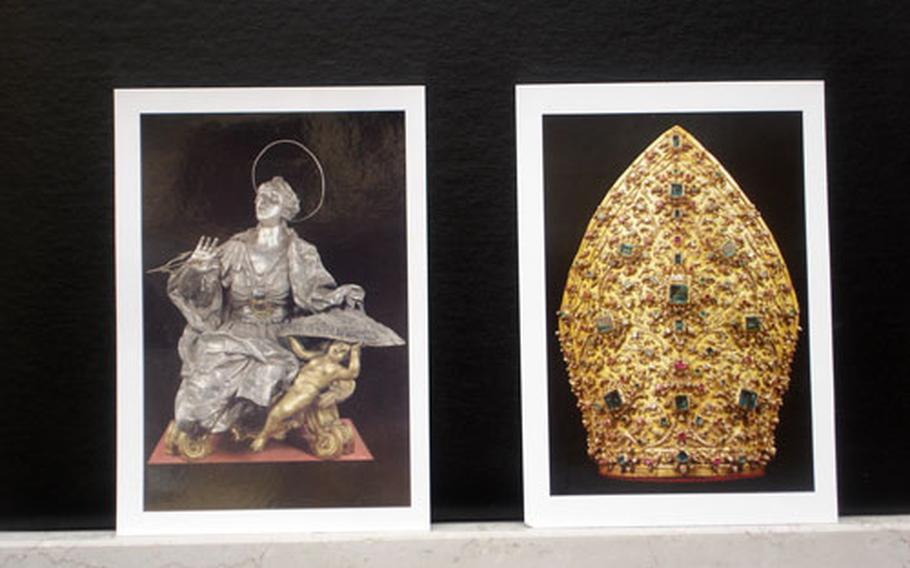 Postcards depicting St. Irene and a gold, gem-encrusted miter -- two pieces of the San Gennaro Treasure collection on display in Naples -- are among the exhibit items available in the museum&#39;s gift shop. (Lisa M. Novak / S&S) 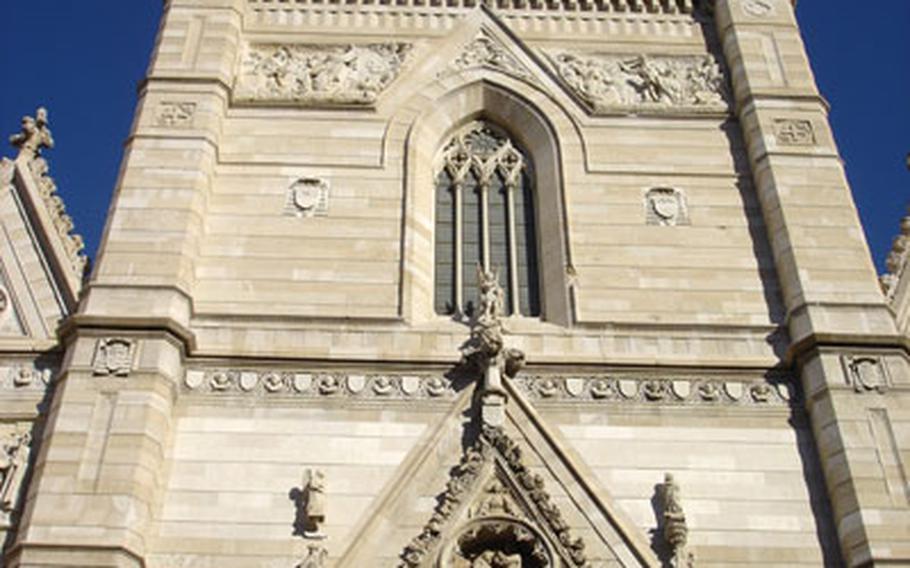 The Museum of the Treasure of St Gennaro is in a building attached to the city cathedral in Naples. (Lisa M. Novak / S&S)

A priceless yet little-known art and jewel collection is on display in downtown Naples.

The exhibit at the Museum of the Treasure of St. Gennaro &mdash; Museo del Tesoro di San Gennaro in Italian &mdash; includes several silver sculptures and religious items adorned with thousands of gemstones. The objects were commissioned in tribute to San Gennaro, the patron saint of Naples, in the past six centuries.

The exhibit is in a building attached to the city cathedral, which also holds a permanent collection of precious objects, silver, jewels and paintings donated throughout the centuries by popes, nobility and ordinary people. The special exhibit will be on display until the end of January.

Upon entering the exhibition room, visitors are greeted with a huge portrait of the saint. The objects displayed on the ground floor are spread throughout several sparsely lit rooms featuring silver works from various artisans. Many of these sculptures were commissioned in the 16th century and display exacting detail, especially in the facial features.

One of the most stunning pieces is the depiction of St. Irene by Carlo Schisano from 1733. She is shown stopping a lightning bolt with one hand and holding the city of Naples above the head of a cherub with the other.

After the sculpture rooms, there is a passage into the sacristy of the church, which displays numerous frescoes and ornate ceiling moldings. The stairwell in this area leads up to the jeweled objects, the main feature of the display.

On the way up, several video screens show clips of life in downtown Naples and other places where its traditions have spread. Some depict the Feast of San Gennaro, held in Little Italy in New York City every summer.

The jewel collection includes priceless objects, including an approximately 2-foot- tall gold miter covered with thousands of emeralds and rubies. The centerpiece, however, is the necklace of San Gennaro. Resembling a gigantic charm bracelet, it is hung with several sapphire- and emerald-adorned crosses.

Throughout this area are video clips of the San Gennaro liquefaction ceremony. This religious ritual is held twice a year in the Naples cathedral, in which the powdered remains of San Gennaro&rsquo;s blood is said to liquefy, bringing fortune to the city.

The museum is centrally located in downtown Naples along Via Duomo, next to the Naples cathedral. It is within walking distance of Christmas Alley and other popular areas of the city, including the Naples Underground, Piazza Dante and many street markets, cafes and restaurants.

Directions: In Naples, take the metro to Piazza Cavour. Leave the station, cross to the opposite side of the street (Via Foria) and go left until you reach Via Duomo. Turn right and continue walking until you see the gigantic cathedral. The museum is attached to the cathedral just under the arch on the right.

Costs: Admission is 10 euros, 7 euros for senior citizens, 3.50 euros for students. The price includes the use of an audio guide, but you have to ask for it when you purchase your ticket.

Food: There is no place to eat in the museum, but there are several restaurants and cafes nearby.

Information: The museum Web site is www.museosangennaro.com. It has a section on the special display, and information on San Gennaro. No photography is allowed of the exhibit, but postcards are available in the gift shop on the way out.