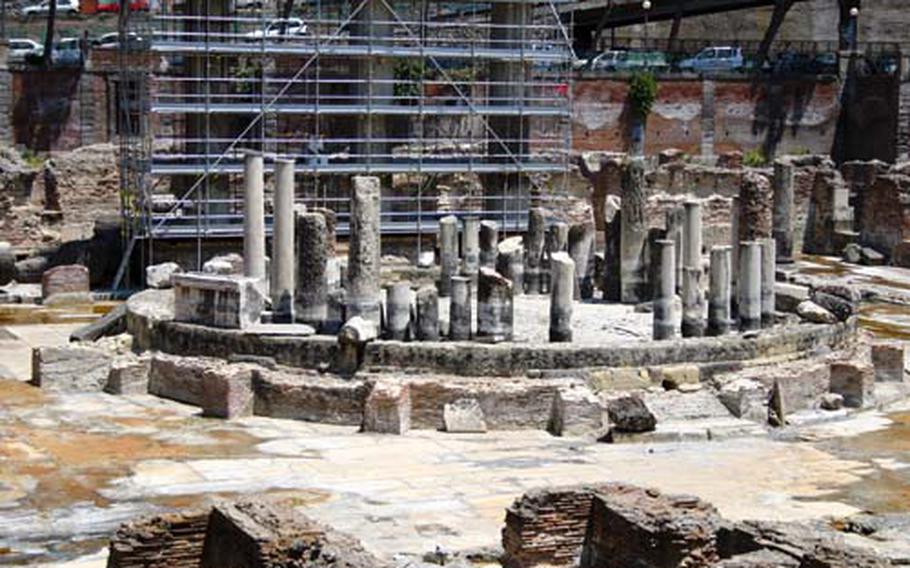 The Temple of Serapis, or macellum, in Pozzuoli, a suburb of Naples, Italy, is an ancient food market from the 2nd century AD. (Sandra Jontz / S&S)

The Temple of Serapis, or macellum, in Pozzuoli, a suburb of Naples, Italy, is an ancient food market from the 2nd century AD. (Sandra Jontz / S&S) Mount Vesuvius looms in the background of Pompeii, Italy, the Roman city demolished by a volcanic eruption in A.D. 79. Entrance fees to Italian state-run tourist sights and museums, including Pompeii, Herculaneum and many others will be waived during the 11th annual “Week of Culture,” which this year runs from April 18-26. (Sandra Jontz / S&S) 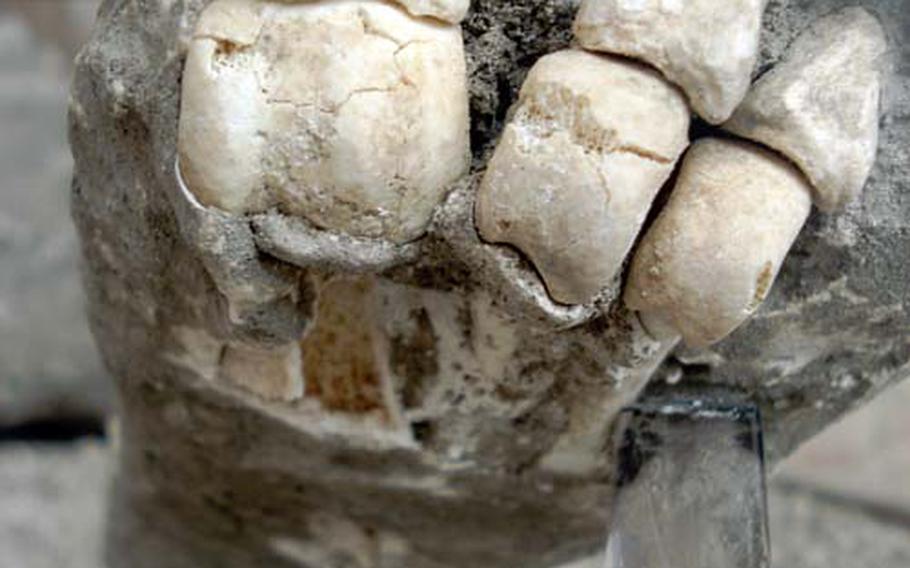 Foot bones still are visible in the cast of a victim of the A.D. 79 volcanic blast from Mount Vesuvius that destroyed Pompeii. The exhibit is a major tourist attraction at the site. (Sandra Jontz / S&S)

See Naples and die &#8212; for free. How&#8217;s that for a twist to the phrase coined during the reign of the Bourbons of Naples?

For nine days starting Saturday, the 11th annual "Week of Culture" (which sweeps across all of Italy) kicks off &#8212; offering patrons free entry to exhibits, shows, tourist attractions and more.

"The fundamental scope of the endeavor is to bring about awareness of culture and foster a love for the arts to a wider segment of the citizens," reads a Web posting of the upcoming event.

With this year&#8217;s slogan: "Culture is for all: participate too," organizers want to draw attention to two fundamental thoughts: the immeasurable value of culture, and its availability throughout Italy.

Here is a listing of just a few of the Naples-based events:

Exhibit at Boscoreale-National Antiquarium, "Man and the Environment in the Vesuvius Territory," from April 18 to Sept. 30.Guided tour of "An Hour at the Museum" at the National Archaeological Museum, from April 18 to May 19.Guided tour, "Visit to the Hole of the Ancient City of Suessula" in Acerra at the archaeological area of historic Suessula, April 18-26.New showing: "Statues of the Blue Grotta" in Anacapri on the island of Capri, at the Casa Rossa Museum, April 18-26.New showing: Baia Castle: The Archaeological Museum of the Phlegean Fields, April 26 only.Extraordinary opening: Miseno Theater and Sacello degli Augustali in Bacoli, April 25-26.Extraordinary opening: Lo Grotta della Dragonara in Bacoli, April 25-26.Guided tour: Archaeological Park of Liternum in Giugliano in Campania, April 18-26.Guided tour: Roman thermal bath system of ancient Neapolis at the Terme di Carminiello ai Mannesi, April 18-26.Exhibit: Valorization and catalogazione of the city historical centers, at the Civico di Castelnuovo Museum, April 18-26.Guided tour: "All beer!" Duca di Martina Museum, April 26.Access to the Acropolis of Cuma, the Baia Castle, Temple of Serapis in Pozzuoli, Villa Vedio Pollione in Posillipo, Campanella Point in Sorrento, Pompeii, Herculaneum and Villa di Damecuta at Capri, April 18-26.Entrance to the Virtual Portici Archaeological Museum in Portici, April 18-26.A full listing (only in Italian) is available on the Internet at: www.zerodelta.net/fiere-settimana-della-cultura-2009-a-napoli.php

Italian cultural officials suggested calling individual venues to see if tours are offered in English. The Information Tickets & Tours office at the Navy base in Naples also can help.