Nakagusuku Castle: A step back into Okinawa's history 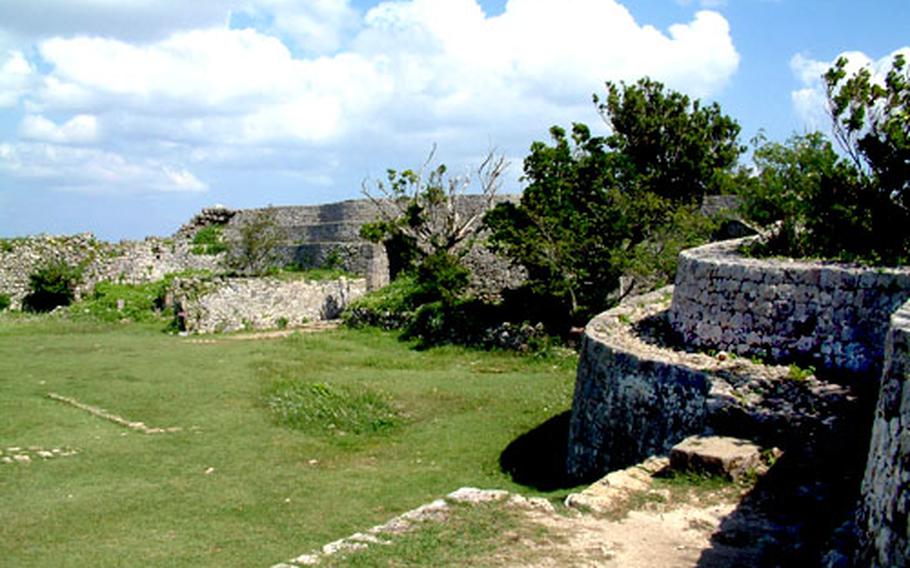 A view of one of Nakagusuku Castle’s six citadels. The castle ruins date back to the 1400s. (David Allen / S&S)

A view of one of Nakagusuku Castle’s six citadels. The castle ruins date back to the 1400s. (David Allen / S&S) 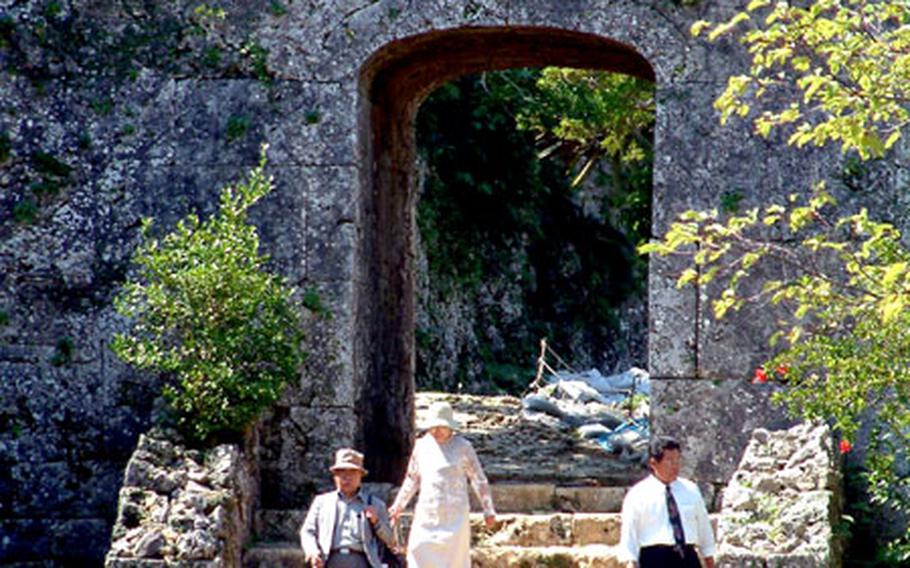 Tourists walk down the steep stone steps of the great archway of the castle ruins. (David Allen / S&S) 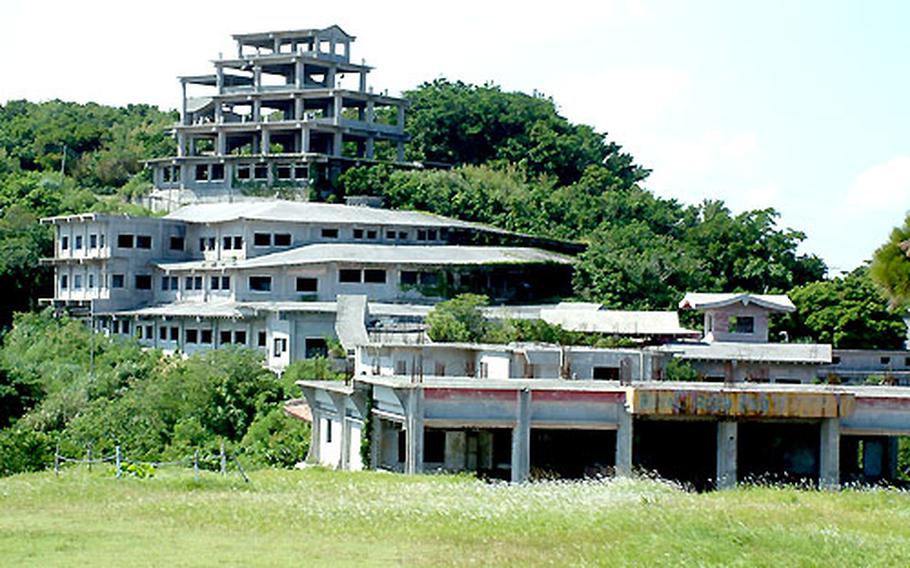 At the edge of the restored Nakagusuku Castle ruins, overlooking the Pacific Ocean, is one of Okinawa’s most famous spooky sites, the “Haunted Hotel.” (David Allen / S&S) 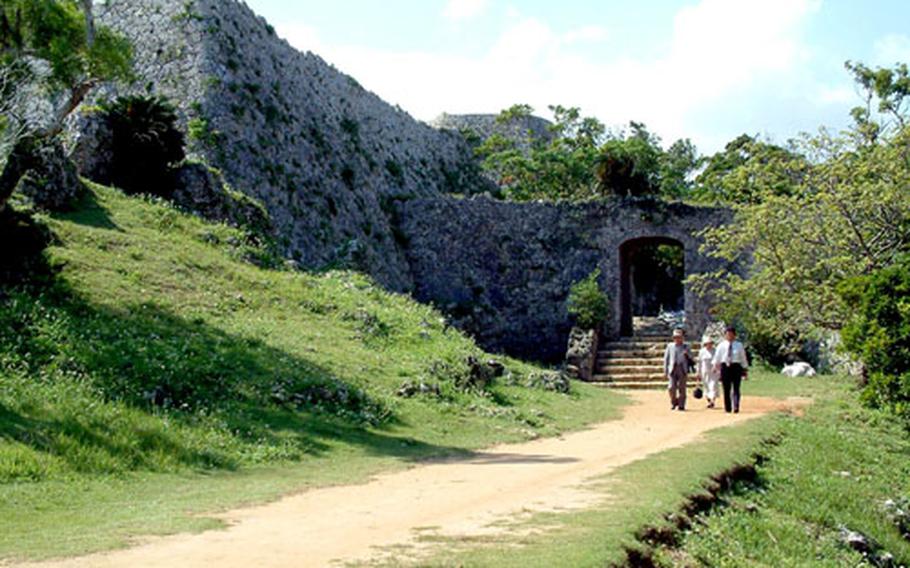 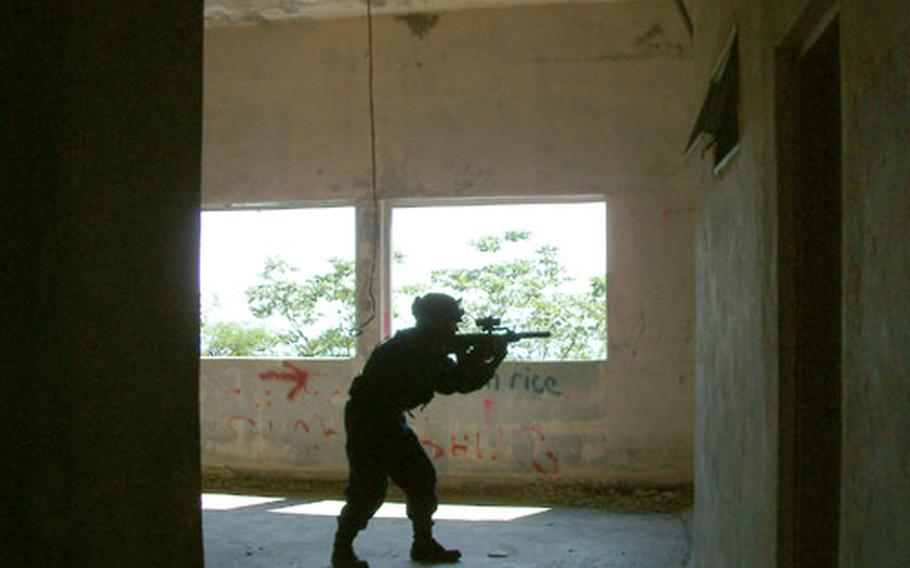 You don&rsquo;t have to go far to explore castle ruins on Okinawa. Chances are there&rsquo;s one nearby.

More than 300 castle ruins are located throughout the islands, harking back to the days when Japan&rsquo;s southernmost prefecture was an independent kingdom of seagoing traders. Many have crumbled, barely noticeable in the surrounding concrete jungles, while others have been restored to some semblance of their former glory.

Nine such sites on Okinawa were added to the United Nations Educational, Scientific and Cultural Organization World Heritage Sites in 2000, singling them out as cultural assets. Towering among them is Nakagusuku Castle &mdash; just a hop, skip and jump from Camp Foster and Futenma Marine Corps Air Station.

No one is sure when the first castle &mdash; or gusuku &mdash; was built on the hill overlooking the Pacific Ocean. It is believed that the first stones were laid early during the 12th century, when hundreds of chieftains built fortresses to establish control over their piece of the island. By the 14th century, turf wars had reduced the number of kingdoms to three, and Lord Gosamaru is said to have expanded the existing castle in 1440 to protect the kingdom of King Sho, the chief ruler.

Historians say Nakagusuku &mdash; which means central castle &mdash; was built to protect what was known as the Chuzan or the middle kingdom. Most of the original walls of the castle structure remain as they were first built, so precisely cut from Ryukyu limestone that no mortar was needed to bind the stones.

It is a tribute to the skill of those early masons that the thick castle walls have survived Okinawa&rsquo;s punishing subtropical climate.

&ldquo;There was a minimum of restoration or repair work,&rdquo; Makoto Toguchi, a member of the Nakagusuku Board of Education, told a Stripes reporter in 1999, when the castle was nominated for the World Heritage Site designation. The refined masonry even impressed Commodore Matthew Perry, whose famous &ldquo;Black Fleet&rdquo; visited Okinawa on its way to mainland Japan in 1853.

&ldquo;The stones, they are carefully hewn and joined, and the absence of any mortar or cement did not seem to impair the durability of the work,&rdquo; Perry later wrote.

Today the castle site is a welcome retreat from central Okinawa&rsquo;s densely populated towns and villages. It is divided into six separate citadels connected by stone archways. The entire site stretches across 27.8 acres, with 3.6 acres within the citadel walls.

Located 500 feet above sea level, a person standing atop the castle walls has a panoramic view of Nakagusuku Bay from the Katsuren Peninsula to the north to the Chinen Peninsula in the south.

Inside the walls are several areas considered sacred, where special prayers for good fortune are still said by some Okinawans.

The sacredness of the location is said to be the reason for the forlorn ruins of a hotel project that marks the southern end of the walk through history. Just outside the south citadel of the ancient castle is the massive, half-finished concrete shell of &ldquo;The Royal Hotel.&rdquo;

The theme hotel was laid out like a small village, but the planning was helter-skelter &mdash; some say there were no blueprints and workers were directed to work on parts of the massive structure at the businessman&rsquo;s whims. Although warned by monks at a nearby Buddhist Temple that he was building on sacred ground, construction continued until several workmen mysteriously died and the rest refused to return to work.

Legend has it the businessman went bankrupt and insane.

For years a monk lived in the ruins, where he set up a small shrine to help the spirits rest. The structure itself is a maze of stairs that go nowhere and dead-end corridors. The tattered remains of red carpeting line some of the graffiti-scarred hallways and old mattresses and other odd, broken pieces of furniture lie dissembled in the rooms.

These days, the haunted hotel is a teenager&rsquo;s dare on moonless nights and an urban battlefield for young ninjas armed with pellet guns during the day.

GETTING THERE: Nakagusuku Castle is located off Route 146 between Routes 329 and 330 near Camp Foster. To get there from the Camp Foster area, take Route 81 from Route 330 and turn right on Route 146. The castle site is about 2.5 km away, on the right side of the road and marked by a red archway.