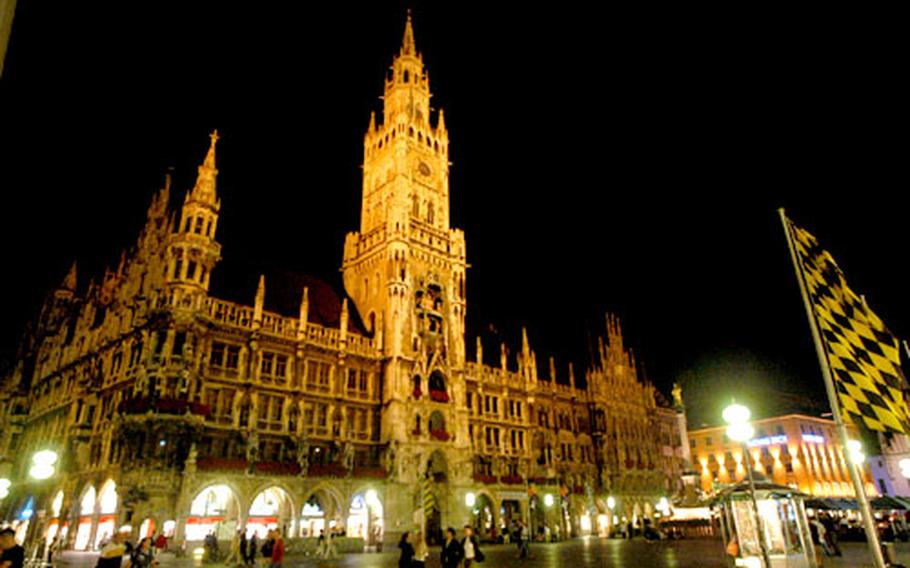 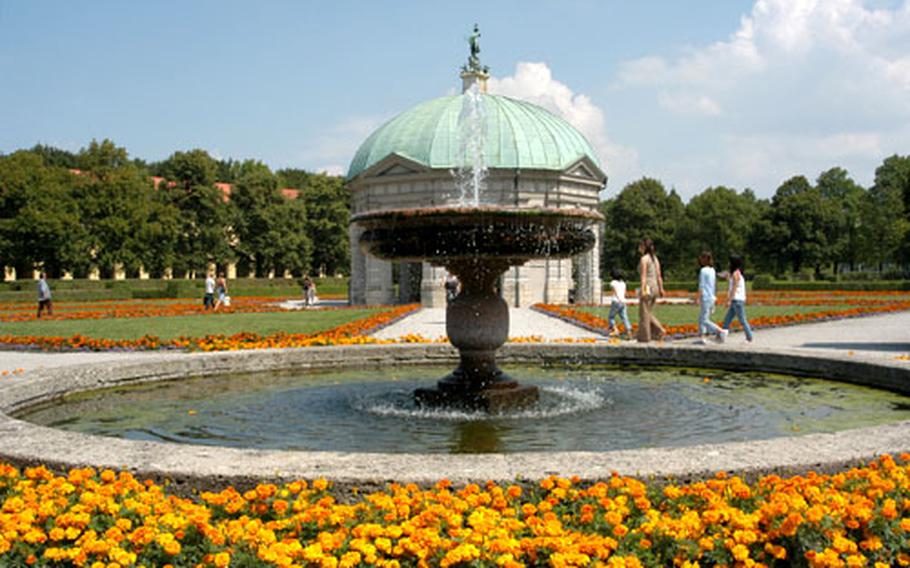 A fountain in the Hofgarten (Court Garden), with the 12-sided temple to Diana behind it. (Michael Abrams / S&S) 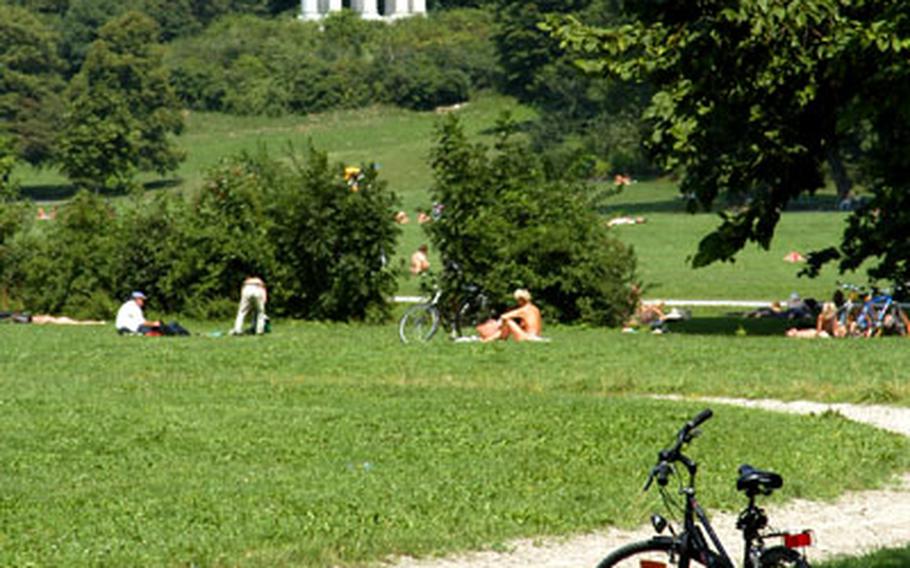 Munich&#39;s English Garden is a popular outdoor spot. In the background is the Monopteros, from where there is a view over the park towards downtown. (Michael Abrams / S&S) 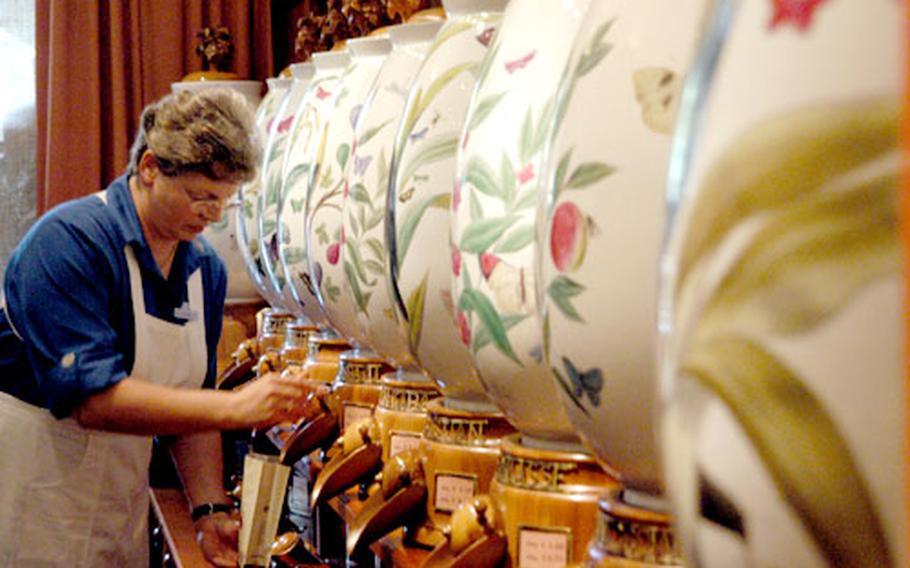 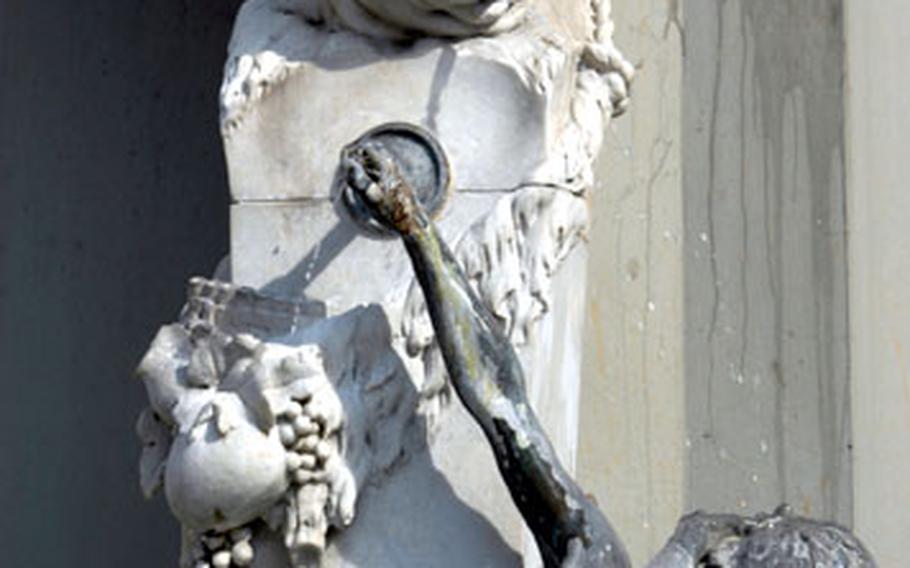 Munich has something for everybody. Sure, it's a clich&eacute;, but in the case of the capital of Bavaria, it fits as well as a snug pair of lederhosen.

Many people have only heard of the city because of the Oktoberfest, Munich's beer-soaked folk festival. That's not a bad reason to know the city; after all, it draws people from around the globe. Almost 6 million visitors, locals and out-of-towners, attended last year's bash.

But there is much, much more to the city: more than 40 museums and 50 theaters, art galleries and caf&eacute;s, royal palaces and expansive parks, discotheques and clubs, historic buildings and churches, top-notch soccer and world-class shopping.

You can visit for a day of fun at the Oktoberfest, or stay a couple of more to see sights, but you won't run out of things to do in the city known as the "metropolis with a heart."

Munich was founded by Henry the Lion in 1158, so it is not necessarily old for a European city. Today, with 1.3 million inhabitants, it is Germany's third largest city after Berlin and Hamburg. Not that you would notice it while visiting. Munich is also known as the "village of a million."

Like many other metropolises, it is made up of several villages that were incorporated throughout the years, giving Munich a small-town feel. If you climb the 306 stairs to the viewing platform of Alte Peter (St. Peter's church tower), you will notice that, with the exception of the town hall's steeple, the highest buildings in central Munich are all church steeples. The great towers of commerce and industry are all on the city's periphery.

Just one more nickname for you. Munich is also sometimes called the "northernmost Italian city." And despite being steeped in Bavarian culture and traditions, there are truths to this, too.

So much of Munich life, weather permitting, takes place outside. From spring to fall, you will find the M&uuml;nchners sitting in street caf&eacute;s and beer gardens or strolling through the parks. The houses and buildings are flower-bedecked, and despite being hard-working, the populace is rather laid-back, especially by German standards.

Having said that, there are two things that will make a M&uuml;nchner angry: Walking on a bike path and standing on the left on an escalator [walk left, stand right].

Start your sight-seeing tour of Munich at Karlsplatz, known locally as Stachus. It is centrally located, a long city block east of the train station, and almost all the S-Bahn lines stop here. Walk through the Karlstor, the old city gate, and you are on Neuhauser Strasse. Later, it turns into Kaufinger Strasse, and these two pedestrian streets make up Munich's main shopping thoroughfare.

In between the shops and department stores, there are three churches worth looking at. The first is the 18th-century B&uuml;rgersaal, with its delicately carved statues of the stations of the cross and the tomb of Rupert Mayer, a Jesuit priest who spoke against, and was imprisoned by, the Nazis.

Farther on is the Renaissance Michaelskirche. Stroll a little farther and you come to Augustinerstrasse, on your left. From here, just a short way up the street is the Frauenkirche, with its twin 326-foot-high towers, the trademark of Munich. From 10 to 5 Monday through Saturday, from April through October, you can take an elevator up the south tower for a view of the city.

Walk back to Neuhauser Strasse and you will be facing the Augustiner Bierhalle, one of Munich's popular brewery inns. It occupies two buildings, with a restaurant and a beer hall inside, a beer garden in the back and tables out front. Here you can have a traditional Munich breakfast of beer and Weisswurst, boiled white sausage made of veal. They are a bit of an acquired taste, so if you see someone eating one, you can be sure it is a local - or a brave tourist. You can probably order Weisswurst all day, but you won't see a M&uuml;nchner eating one in the evening, because, as the saying goes, a Weisswurst "may not hear the noon bells."

Continue your stroll and you come to Marienplatz. Here there are two buildings of note. The Altes Rathaus (old city hall) and Neues Rathaus (new city hall) with its 260-foot-high tower. If you come out of the subway station at 11 a.m. and everyone is looking up, you have arrived just in time to join them and watch the show in the tower with a glockenspiel and two sets of mechanical figures. One re-enacts a tournament at a royal wedding, and the other, the Sch&auml;fflertanz, or coopers' dance, celebrates the end of the plague in 1517.

From here, walk to the aforementioned St. Peter's and climb the 300-foot Alter Peter for a great view of the Frauenkirche, the Neues Rathaus, the rest of Munich, and, if the weather is clear, the Alps.

If the climbing made you hungry, or if you didn't have your Weisswurst at the Augustiner, you can have them at the Viktualienmarkt, Munich's central market, nearby.

Or perhaps climbing made you thirsty, and you would like to compare Augustinerbr&auml;u with another Munich brew.

Walk under the Altes Rathaus tower, take a left up Sparkassenstrasse, then a right down M&uuml;nzstrasse and you come to that ultimate destination for beer drinking, the Hofbr&auml;uhaus. During the day is a good time to come. You can sit with the locals and enjoy a good Munich beer and eat Bavarian specialties. But in the evening the beer, food and the house oompah band might be the only things here that are local, as tourists from all over swarm the place, and the locals head elsewhere.

Interested in crown jewels and other things that sparkle? Head for the Residenz, the palace of the Wittelsbach dynasty. Inside is the Schatzkammer (treasury), a dazzling collection of crowns and heirlooms of the Wittels- bachs'. The centerpiece is a small statue of St. George, covered with more than 2000 diamonds, 400 rubies and 200 pearls. Check out the Residenzmuseum for their collection of tapestries, paintings and furniture.

After the Hofbr&auml;uhaus and the Residenz, it is time for some fresh air. Walk through the formal Hofgarten and through the passageway under a busy intersection, and you come to the Englischer Garten, Munich's huge city park.

Laid out more than 200 years ago, it is a beautiful expanse of green, crisscrossed by paths for walking, bicycling and horseback riding. This is where Munich comes to relax and to play.

If it is warm and the sun is shining, you might notice that some of the sunbathers are nude. This is especially true in the meadows south of the Monopteros, the templelike structure set on a knoll. From here there is a good view not only of the sunbathers but also across the park to the city.

In the center of the Englischer Garten is a pagoda-shaped structure called the Chinesischer Turm, with its very popular beer garden.

North of here is the Kleinhesseloher See, a small lake where you can rent a rowboat or paddle boat and work off some of that beer. Or, if the rowing makes you thirsty, there is another popular beer garden here to quench it.

If you exit the Englischer Garden to the west, you are in Schwabing. This was once Munich's bohemian district, around the turn of the last century, and home to artists Wassily Kandinsky and Paul Klee as well as writers Bertolt Brecht and Thomas Mann and Russian revolutionary Vladimir Lenin. It is not as bohemian today but still has a different air from the rest of Munich and is full of caf&eacute;s, bars, boutiques and restaurants. Nearby is the university with its bustling student life.

Schwabing's main thoroughfare is Leopoldstrasse, which turns into Ludwigstrasse after the Siegestor (Victory Arch), and leads back to the center of town, past the upscale shops on Theatinerstrasse.

Where: Munich, the capital of the German state of Bavaria, is in southeastern Germany.

When: Go anytime; the city almost always has something to offer. When the weather is warm, Munich life takes place outside, in the caf&eacute;s and beer gardens and in the city's parks. Late September and early October, Oktoberfest time, are also nice. From the last weekend in November until Christmas, Munich is in the holiday spirit, with numerous Christmas markets throughout the city. During the Carnival season, known as Fasching in Munich, the city parties, especially on Fat Tuesday with the dance of the market women at the Viktualienmarkt.

Getting there: You can reach Munich easily by car. Autobahn 8 coming from west (Stuttgart) and southeast (Italy) ends in Munich, as does Autobahn 9 from the north (Vilseck, Hohenfels) and Autobahn 95 from the south (Garmisch). From Kaiserslautern and Mannheim, take A6 to A7 to A8, and from W&uuml;rzburg take A7 to A8.

There is little free parking in Munich, so be prepared to pay for parking, which can become expensive.

Coming by train, you arrive at the city's main train station, the Hauptbahnhof. Trains arrive here from all directions, including connections from Italy. The train station is centrally located, and from here it is a short walk downtown and to the Oktoberfest on the Theresienwiese.

Munich's Franz-Josef-Strauss airport is northeast of the city near Erding, about 40 minutes away by public transportation. Flights from throughout Europe and the United States arrive here.

Where to stay: There are plenty of hotels in Munich in all price categories. There are also hostels and campgrounds.

A good place to look for accommodations is on the city's Web site at: www.munich.de. Click on the British flag for the English-language version, and then click on "Accommodations." Be forewarned, it is hard, if not impossible to find a centrally located hotel during the Oktoberfest, and most hotels jack up the prices during the fest.

Getting around: The best way to get around Munich is with public transportation. A tight web of bus, suburban train S-Bahn, subway (U-Bahn) and tram lines crisscross Munich. It costs 2 euros for a ticket. If you plan to do a lot of traveling on public transportation, buy a day ticket (Single-Tageskarte). For central Munich, where most of the sights are, a day ticket only costs 4.50 euros. For the whole Munich system, 9 euros. For children 6-14 years old, the day pass costs 1.80 euros.

Even better is the Partner-Tageskarte. Up to five adults can use this pass to travel together. Two children count as one adult, so a family with six children could also use it. The Partner ticket costs 8 euros for central Munich and 16 euros for the whole net.

If you plan to be in Munich for a couple of days, a three-day single ticket costs 11 euros for central Munich and 18.50 euros for the Partner ticket. There is no three-day ticket for the complete net.

Sight-seeing: If you want to take a guided tour of Munich, stop by the Tourist Information Office on Marienplatz. They offer tours and have fliers for other tour operators. Many hotels also have tour fliers or offer information. Popular English-language tours of Munich are "The Original English Walks" tours (www.radiusmunich.com ) and "Mike's Bike Tours" (www.mikesbiketours.com).

More info: Check out the Munich Web site at: www.munich.de. The city has two tourist information offices, one at the main train station and one in the city hall on Marienplatz, phone: (+49) (0) 89-2333032.