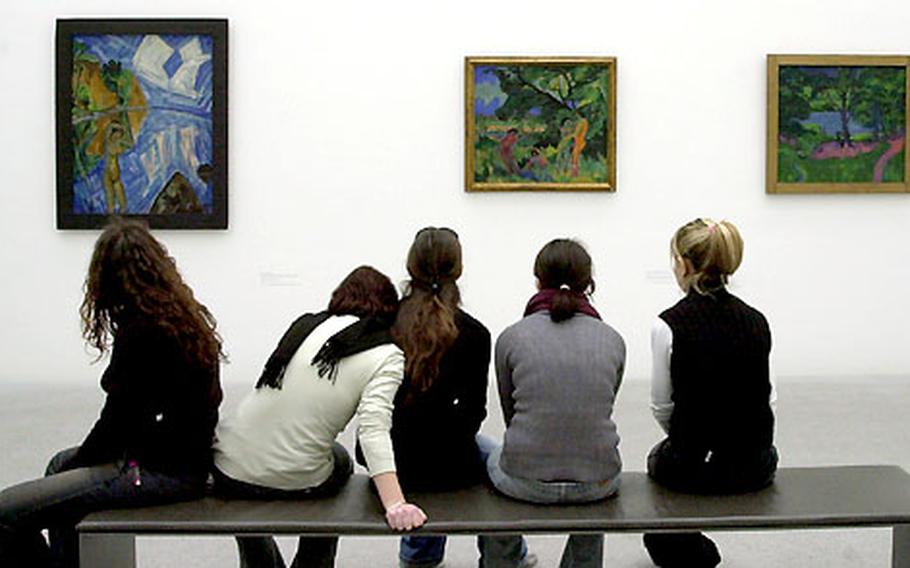 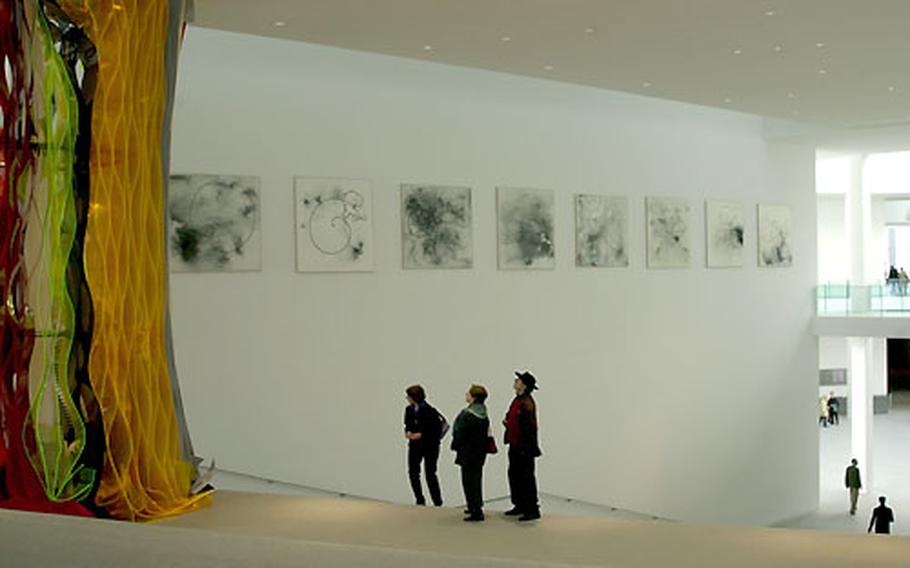 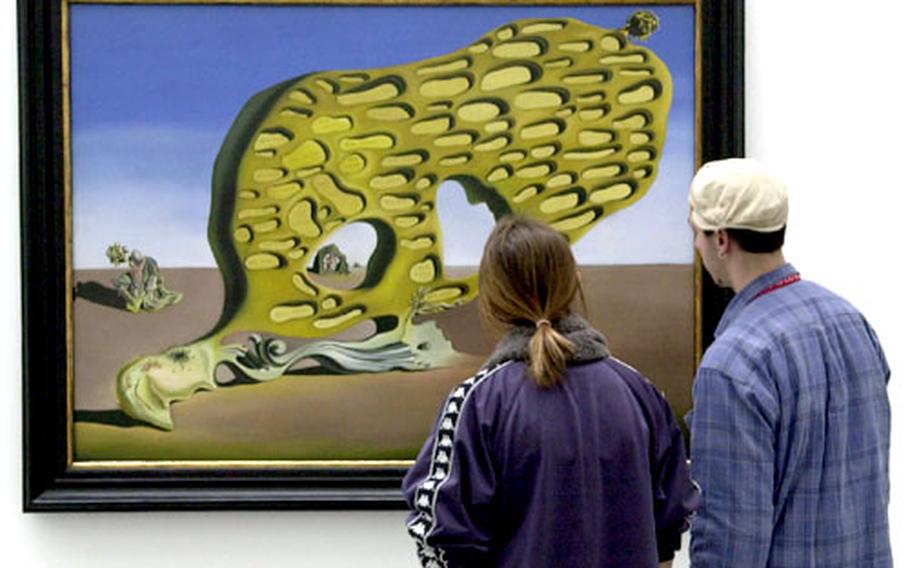 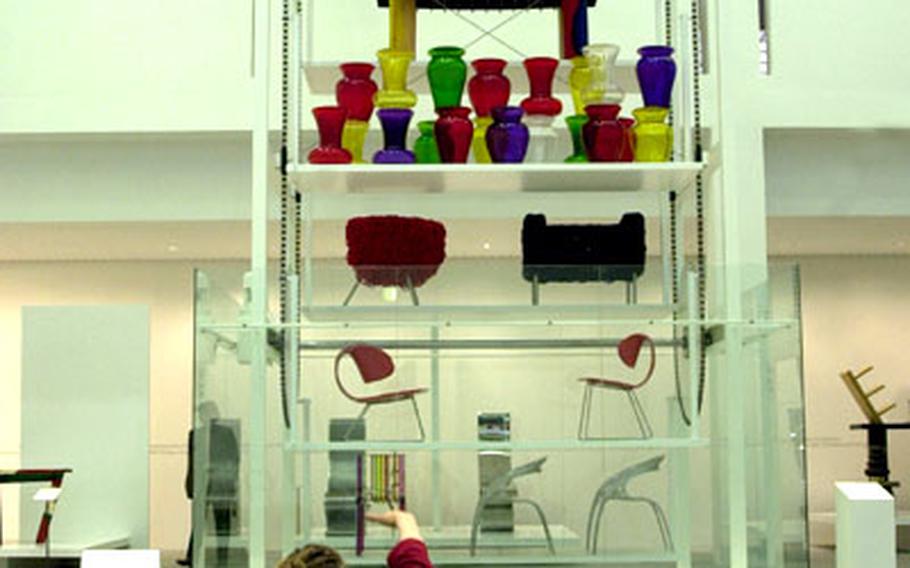 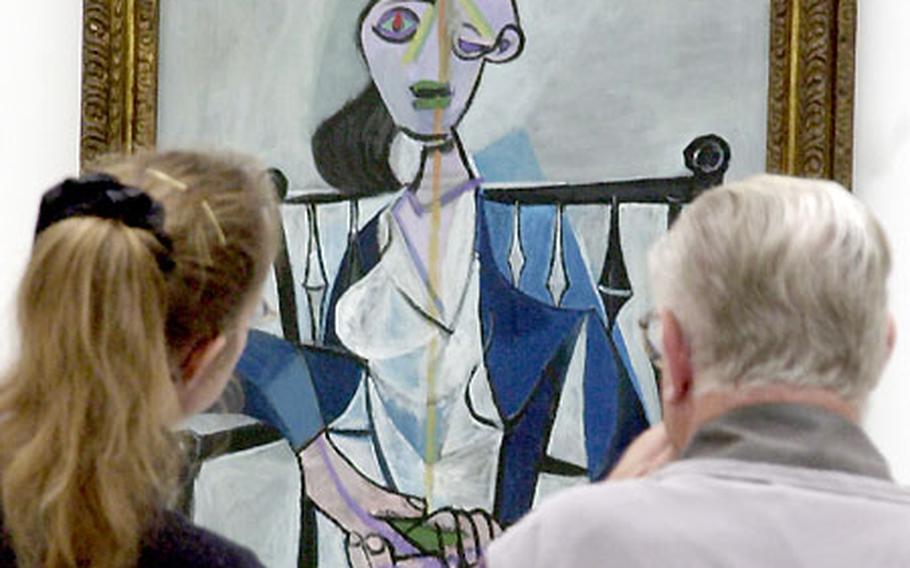 The Pinakothek der Moderne is Munich's temple to modern art.

The building, designed by local architect Stephan Braunfels, is a work of modern art itself. It is a soaring, angular glass structure with an airy central rotunda and wide, sweeping staircases.

Impressive as the architecture is, it is the works of art displayed inside, from the early 20th century to the present, that are the museum's real treasures.

You enter the museum through a glass foyer that leads into the three-story-high glass-and-concrete rotunda.

On the ground floor are two rooms for temporary exhibits, the architecture exhibit and Works on Paper, the graphic arts collection.

A staircase leads off the rotunda to the basement level with its design exhibit. Here you can trace, as the museum's information booklet says, "the history of design from the pioneers of modernism to current developments."

On display are such things as Apple computers, toasters, espresso machines, automobiles and furniture by Luigi Colani. A pair of two-story-high paternosters - revolving doorless, elevators - go around and around, their shelves filled with models of chairs, tables, vases and toasters. If you have an oddly shaped household appliance, the design model for it is probably on display here.

From the rotunda, diagonally across from the stairs leading down, another staircase leads to the heart of the Pinakothek der Moderne, the modern art collection.

From the expressionism of Emil Nolde to the cubism of Pablo Picasso, from the Bauhaus of Paul Klee to the pop art of Andy Warhol, and to the contemporary video installations of Bruce Nauman, all the major names of the eras are represented here. Works by Salvador Dali are on display as are pieces by Wassily Kandinsky, Max Ernst, Joseph Beuys, Jeff Wall, Francis Bacon, Jasper Johns and Robert Rauschenberg.

Thirty-six rooms, most illuminated by diffused sunlight from the skylights in the building's roof, offer plenty of space to exhibit the works. They are split into two wings, one for art before 1960, the other for art after. They are connected by the rotunda, where a spiral staircase leads up to the sculpture gallery with works by Marino Marini, Toni Stadler and Henry Moore.

From here there is a view over the museum's entrance hall two stories below. Above, sunlight throws shadows of the rotunda's support beams onto the walls and the floor below, creating a work of art of its own.

Where: Barer Strasse 40 is between Munich's city center and the German borough of Schwabing, in the city's so-called art district. As in much of downtown Munich, parking is always a problem, so try to use public transportation. On streetcar No. 27, get off at the stop called Pinakothek. With subway line U2 and U8, get off at Theresienstrasse, on line U3 and U6, get off at either Odeonsplatz or Universitat.

When: The Pinakothek der Moderne is open from 10 to 5 daily except Mondays. Thursday and Friday it is open until 8 p.m.

Cost: A day pass costs 9 euros for adults and 5 euros for children, seniors and students. A day pass for all three Pinakothek museums is 12 euros, the reduced ticket costs 7 euros.

Together with the nearby Alte Pinakothek and the Neue Pinakothek, one can trace the history of art from the late Middle Ages to the 21st century in a day. The Alte Pinakothek features more than 800 masterpieces from the Middle Ages to the end of the rococo period with one of the world's largest collections of paintings by Peter Paul Rubens as its centerpiece. Another highlight is the Altdeutsche Malerei (old German painting) collection with works by Albrecht Altdorfer and Albrecht D&uuml;rer.

The Neue Pinakothek's collection of art reaches from the late 18th century to the beginning of the 20th. Its centerpiece is 19th-century German art - largely from the private collection of King Ludwig I of Bavaria - with works by Casper David Friedrich, Hans von Marees and Wilhelm von Kaulbach. A good collection of impressionist art is also on display.

Admission for both is 5 euros for adults, 3.50 euros for students, children and seniors. All three museums are free on Sundays, but only for the permanent exhibits; there is admission for any special shows that might be going on.