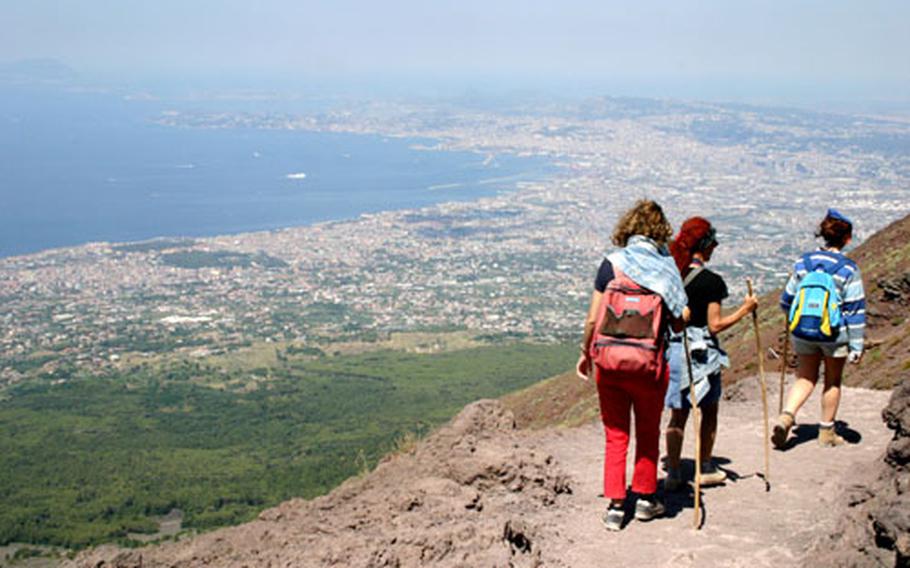 From Mount Vesuvius, a panorama of the city of Naples, Italy. (Sandra Jontz / S&S)

From Mount Vesuvius, a panorama of the city of Naples, Italy. (Sandra Jontz / S&S) Climbers take heed along the sometimes narrow footpaths that let visitors walk about three-quarters around the crater. Some portions of the path are not railed on the outer slope side of the mountain. (Sandra Jontz / S&S) 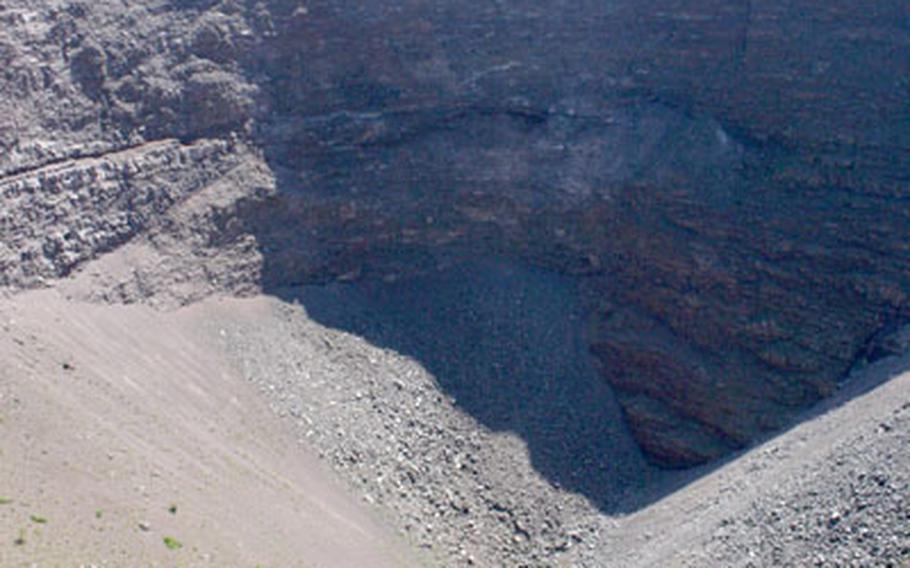 The crater of Mount Vesuvius, which measures about 1½ miles in diameter, provides a spectacular view to reward the challenging climb that visitors endure to reach the summit on foot. (Sandra Jontz / S&S)

The first time was during the climb up its steep footpaths.

The second was when she reached the summit.

“It’s absolutely breathtaking,” the 51-year-old from Birmingham, England, said of the spectacular view of the city of Naples, Italy, from the summit of the 4,202-foot-high Mount Vesuvius.

“I didn’t expect it to be this fascinating. It’s a journey worth taking.”

The active, 20,000-year-old volcano even takes Italians by surprise.

“It’s different from what I expected,” said 39-year-old Cristina Giliberti, visiting from Milan.

“I expected it to be darker. I had always thought it was more menacing. It is very beautiful and peaceful.”

The volcano, made famous by the catastrophic eruption in A.D. 79 that buried Pompeii and Herculaneum, is about a 15-mile drive from the Capodichino base of Naval Support Activity Naples.

Reaching the summit can be done only on foot. It is easy for people in good shape, and the roughly 14 percent incline is doable for others, as long as they take their time and are careful on the dusty and sometimes slippery path of steep switchbacks.

The challenging climb is rewarded by the sight of the crater, which measures about 1½ miles in diameter, and the stunning views of the Bay of Naples, Bay of Sorrento and a glimmer of Pompeii on the volcano’s southern side. The views depend, of course, on whether the weather is clear or the haze of smog does not obscure the vision.

Visitors can walk about three-quarters of the way around the crater, but take heed because some portions of the path are not railed on the outer slope side of the mountain.

Guided tours are included in the entry fee into the park, and are available in four languages: English, Italian, German and French. The tour includes a group walk to the top with explanations along the way of the volcano’s history and interesting sights.

There are a few souvenir shops hawking merchandise purportedly made from lava and minerals from the mountain, from jewelry to boxes of volcanic rock and even sculptures of the Statue of Liberty and Eiffel Tower for those who can appreciate the irony.

On a recent trip to the volcano, the slick, steep and narrow footpaths weren’t the only dangers. In the sole bathroom facility on the mountain, located in the snack bar in the parking lot, a live scorpion was on hand to share one of the stalls.

Made for an interesting — and quick — visit.

DIRECTIONS: If traveling by car, from Naval Support Activity Naples Capodichino, take autostrada A-3 toward Sorrento and get off at the Torre del Greco exit. Follow the signs that clearly mark the roads for Vesuvius. Buses run to the volcano and visitors can catch them at the parking lot at the Ercolano (or, in English, the Herculaneum) Scavi Circumvesuviana train station.

TIMES: The park is open 9 a.m. to 5:30 p.m. daily throughout the year, although it can be closed during inclement weather because of the dangers posed by rain and especially high winds.

COSTS: Entry to the park is 6.50 euros. Parking is an additional 2.50 euros. An elderly couple sit at the entrance and will provide visitors with walking sticks, and accept tips when visitors return the sticks on their way out.

FOOD: A snack bar is in the parking lot, which also has the only restroom, which costs a 50 euro cents “donation.” Beware, on a recent trip a scorpion was on hand to share one of the bathroom stalls.