Mount Fuji: You might want to think twice before signing on for a bus trip to Fuji 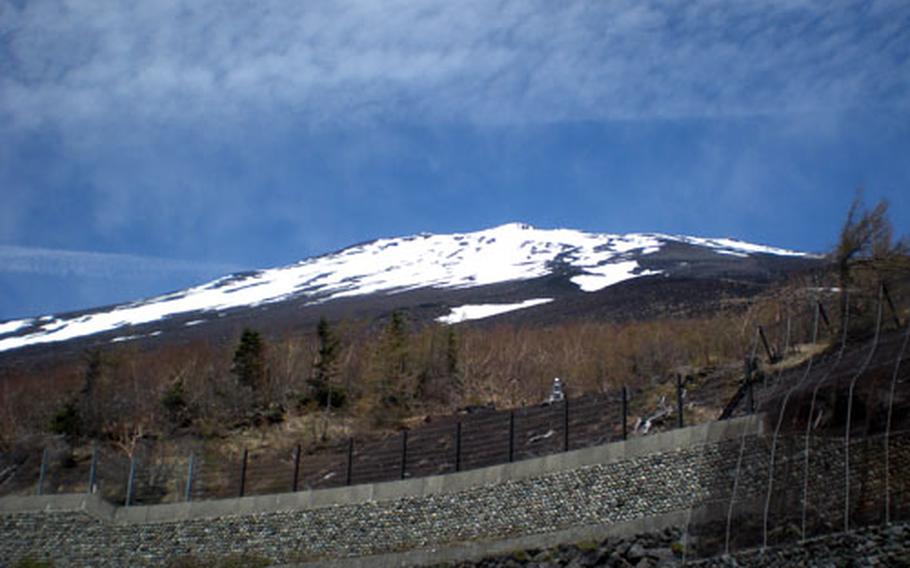 This was the view of Mt. Fuji from the fifth station. The only thing taking our breath away here was the thin air. (Courtesy of Marjorie Newell)

This was the view of Mt. Fuji from the fifth station. The only thing taking our breath away here was the thin air. (Courtesy of Marjorie Newell) 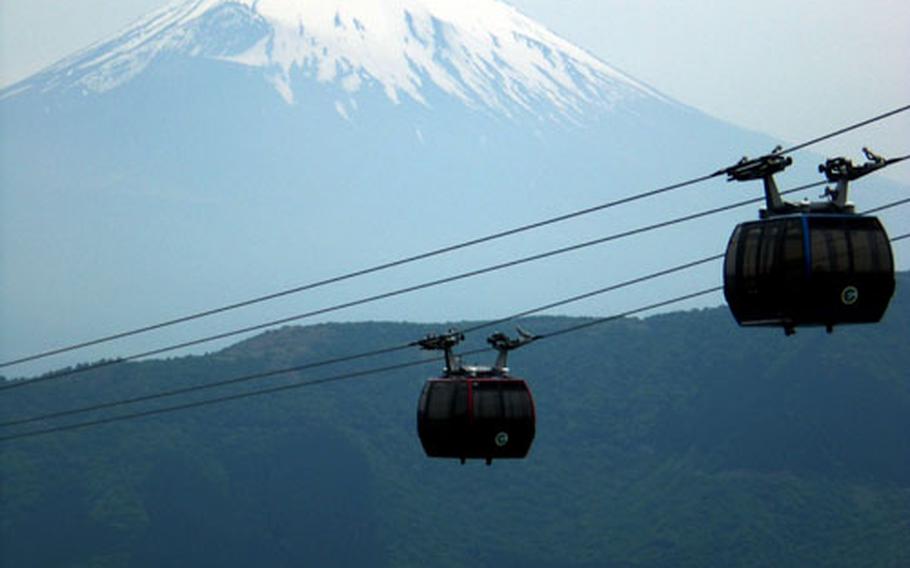 The gondola view of Mt. Fuji was certainly a sight to behold. For the author it was one of the few positive trip perks. (Courtesy of Marjorie Newell) 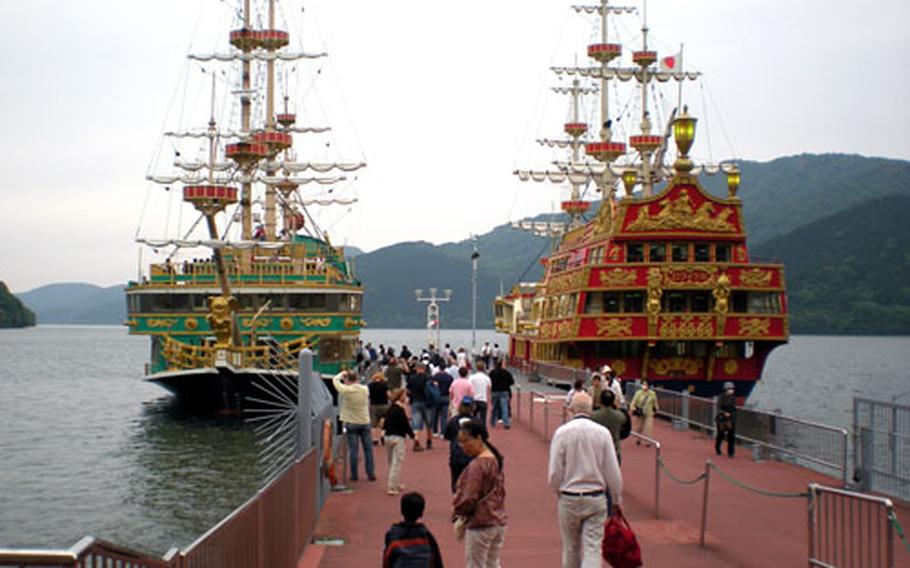 The pirate ships sit docked on Lake Asahi. The boat ride was a welcomed break from the bus that shuttled us throughout the Fuji-Hakone area. (Courtesy of Marjorie Newell) 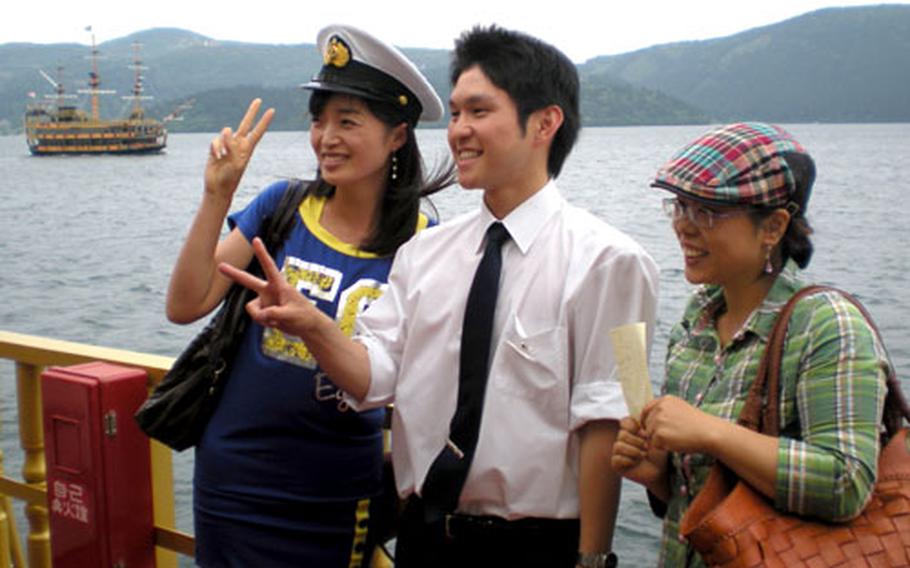 During the pirate ship cruise on Lake Asahi, two ladies pulled the first mate from his duties long enough to get a photo with him. (Courtesy of Marjorie Newell) 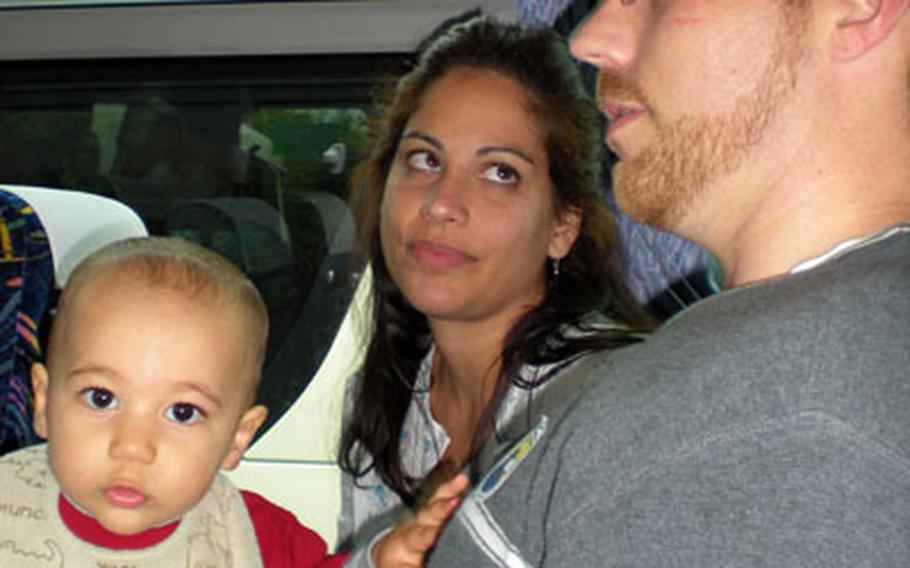 As the Fuji excursion headed forward, this look from the author’s wife appropriately sums up seeing Mount Fuji by bus. (Courtesy of Marjorie Newell)

A popular saying in Japan goes like this: "Anybody would be a fool not to climb Mount Fuji once &mdash; but a fool to do so twice."

My addendum: "And anybody with small children would be truly foolish to see Mount Fuji by bus."

When my sister came to visit us recently, we decided that seeing the mountain was a must. So we laid down our 16,000 yen (about $180) per person and gathered at the New Sanno Hotel in Tokyo for an 8:25 a.m. departure. After taking aboard guests at three other hotels, by 9 a.m, a bus full of excited tourists headed toward Fuji. Hooray!

High spirits took a sharp U-turn 45 minutes into our journey when my wife&rsquo;s stomach started feeling queasy. She sometimes gets car sick and on this trip, she started bubbling like Fuji-san did on Dec. 16, 1707, which is the last time the mountain blew chunks. It probably didn&rsquo;t help that the bus ventilation was hardly working and that what did come out was relatively warm air, an issue that plagued many patrons all day long. After the episode ended in a plastic baggie, she felt relieved and ready to venture. This was probably about the time our 10-month-old son began to get fussy.

In no way is it the tour&rsquo;s fault that we decided to bring a restless baby. That was our decision; one that was not well thought out. What frustrated us was how the hot and cramped bus added to our woes. Pleas to jack up the cool seemed to fall on deaf ears; or perhaps ears that heard perfectly well, but were simply fashioned for 80-degree temps.

After three challenging hours on board, our spirits were bolstered at the sight of Fuji-san. Though shrubbery and trees often blocked the scene, we were able to enjoy occasional views of the mountain. The good vibes were doused by a very curvy trip from the mountain&rsquo;s base to 5th Station. Again, I had failed to envision this little wrinkle on behalf of my wife, though most passengers didn&rsquo;t seem troubled.

When we finally made it to 5th Station we were more than happy to get the heck off the bus and grab a good glimpse of Japan&rsquo;s most famous natural formation. We were immediately disappointed with the vantage, which was akin to being at an art gallery and trying to admire a painting by standing directly under it. It was not the awe-inspiring moment we envisioned. In fact, the only thing taking our breath away at that moment was thin air. I think most people on the tour felt the same, as most spent the majority of 30 minutes at the 5th Station enriching the gift shop owners as we stuffed our bags with ticky-tacky souvenirs. At least they had a good selection of magnets for my collection.

It was about 1 p.m. when we made the zig-zag descent from Fuji and arrived in Hakone. What I thought would be an hour-long visit to peruse the famous Japanese weekend getaway was just a drive-by in our stuffy bus. I can&rsquo;t even recall a single landmark. By now, we were starving, but lunch was not to be served until 2 p.m. When we finally made it to the restaurant, we were given limited time to eat, use the facilities and do whatever else needed doing. As if on cue, just as we were ready to board the bus, our son dropped a sizzling deuce in his diaper. While we struggled to change the lad in the restaurant lobby, our tour guide came rushing in to see what was the holdup, hovering over the three of us until Alex was cleaned up. Climbing the stairs, we braced ourselves for the walk of shame &mdash; that lonely, guilt-ridden trot to the back of the bus that wins disapproving stares from strangers whose eyes ask what on earth the holdup was. Our seats were in the rear.

Our next destination was a gondola ride to Owakudani. The ride was really neat and gave a great view of Hakone and Mount Fuji. In Japanese, Owakudani means "Great Boiling Valley." There are several vents here that allow the sulfur to escape the mountainside area. It would have been cool to have trekked somewhat close to the vents as there were wooden planks leading to the area, but with only 25 minutes allotted, we had just enough time to check out another shop. It was at that point when I felt the large tourist bulls-eye that had been drawn on my back.

Growing weary of being herded to gift shops instead of experiencing the area, we crammed on the bus once again and headed toward Asahi Lake for a cruise on a pirate ship. It was a picturesque ride on the water. But in all honesty, we were beat down from the long day and retreated to the cabin.

Thankfully we had opted to pay extra up front for a return to Tokyo by shinkansen. If not, we would have gladly spent double to circumvent another three-hour return by bus. The bullet train experience was indeed a neat way to end a mostly-disappointing day.

I believe that the Mount Fuji bus adventure was enjoyed by those who were in Japan only a few days. My sister, for example, said it was one of the highlights of her time here. Many visitors echoed her sentiments. Our tour guide was good overall and gave many informative facts about Japanese customs and Fuji-san. At the train station, she purchased our tickets and made sure we were headed in the right direction before saying good-bye. For military members who live here, however, I recommend spending a little extra cabbage and seeing Fuji-san and Hakone on your own terms. The frenetic push to see the whole area in one day is just not worth it. And for heaven&rsquo;s sake, think two, three and even four times before bringing your little one on a full-day bus trip. We certainly won&rsquo;t be fooled again.