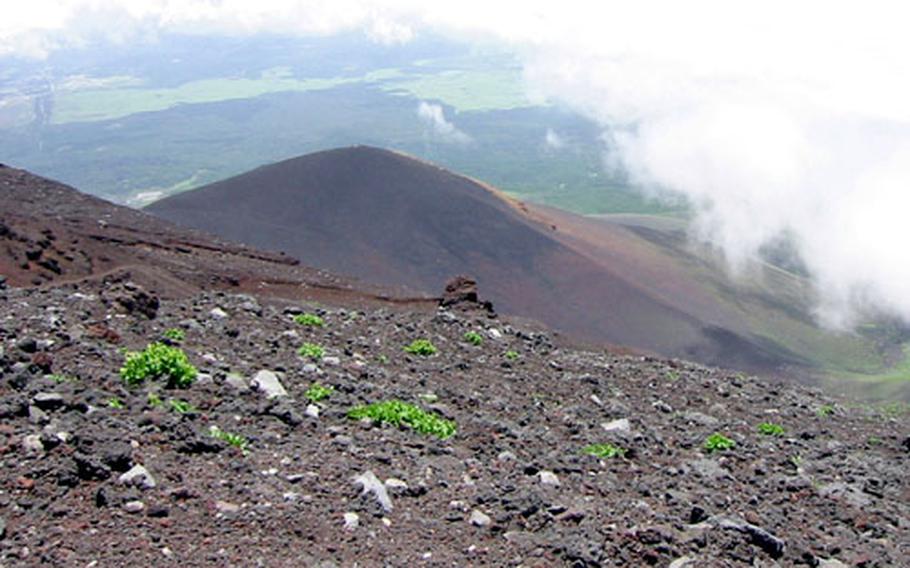 The view down, from between the 6th and 7th stations on Mount Fuji. (Jason Carter / S&S file photo)

The view down, from between the 6th and 7th stations on Mount Fuji. (Jason Carter / S&S file photo) A climbing stick is branded at one of the resting stations on Mount Fuji. Many climbers purchase the sticks and keep them as souvenirs. (Jason Carter / S&S file photo) 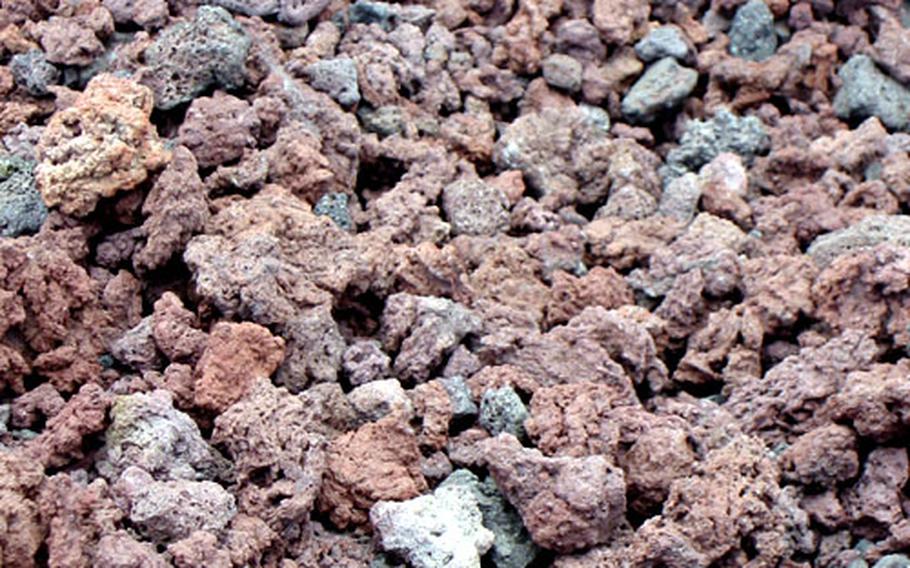 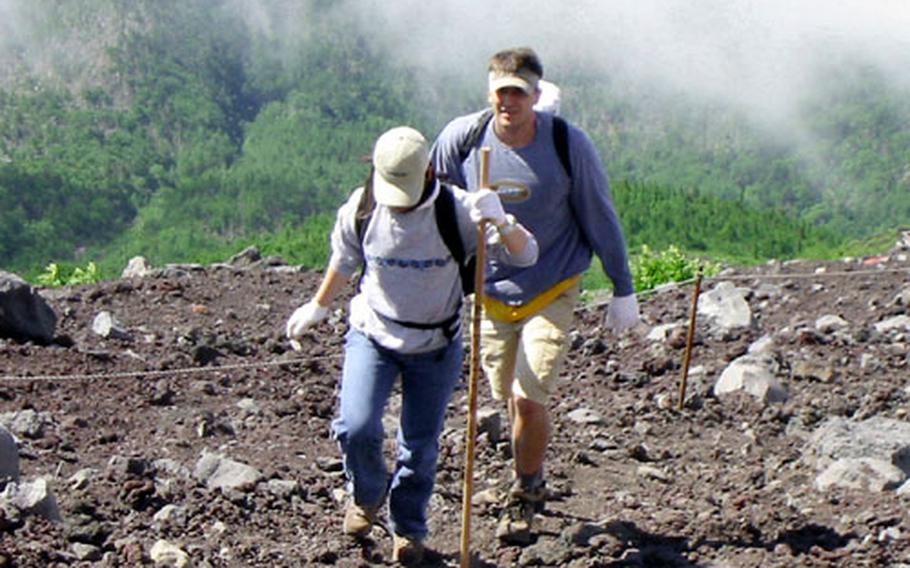 Climbers trek up Mount Fuji along Fuji Skyline Route at the height of about 8,000 feet. You do not see trees or grass above the fifth station. (Jason Carter / S&S file photo) The trail becomes steeper and steeper during the ascent. Near the seventh station, hikers face more difficult terrain and must scramble over fantastic geologic formations. (Jason Carter / S&S file photo)

Mount Fuji is the peerless, sacred mountain of Japan.

The mountain is considered one of the two most beautiful conical volcanoes in the world, the other being Ecuador&rsquo;s Mount Cotopaxi, at 19,724 feet.

Fuji&rsquo;s base, which forms an almost perfect circle, stretches 22 miles to 25 miles from east to west and the same distance from north to south. Many explanations have been given as to the origin of its name, one of which is that it is derived from the Ainu &mdash; aboriginal people inhabiting the northernmost islands of Japan &mdash; word for &ldquo;fire.&rdquo;

The delight of the Mount Fuji climbers lies in the view of the rising sun from the top of the mountain &mdash; a towering but attainable 12,388 feet. As they see the bright red sun rising from the east, above the clouds and mountains, they say they feel the glory and future prosperity of the nation.

The first foreigner to ascend the mountain was Sir Rutherford Alcock, the first British Minister to Japan, who made the ascent in 1860. The first woman to make the ascent is said to have been Lakey Parkes, the wife of the succeeding British Minister, it being forbidden for Japanese women to climb Mount Fuji further than the second station until the Meiji Restoration in 1868.

Mount Fuji has served as the favorite subject matter of poets and artists through all ages in Japan. Indeed, all have vied to depict the beauty and charm of this matchless mountain. Yamabe-no-Akahito, one of the greatest of the Man-yoshu poets in the early part of the eighth century, wrote about Mount Fuji.

Fuji is still an active and young volcano.

When asked about the possibility of an eruption in the future, Akira Sakai, of the Geological Survey of Japan, said that from 2000 to 2001, low-frequency tremors were recorded often in the northwestern part of Mount Fuji. Scientists don&rsquo;t deny the mountain could erupt in the future, but they cannot tell when it would be. If an eruption occurs, the falling dust would damage computers and trains. In the last eruption in 1707, it is said that Edo (Tokyo now), 75 miles away, was covered in ash six inches deep.

Once again the annual climbing season has arrived. Fuji is open for ordinary climbers July 1 through Aug. 31. Last year, 300,000 climbers scaled Fuji in July and August.

When: It is recommended hikers wear long sleeves and caps and also prepare for rain. Before July and after August, the mountain&rsquo;s huts are closed, and there is no communication available.

Routes: There are four popular routes leading to the top of Mount Fuji.

The Kawaguchiko route is the most popular and it is also called the Fuji Yoshida Route.

Keio buses run from the west exit of Shinjuku station in Tokyo. It takes two and half hours and costs 2,600 yen.