Montepulciano: Hilltop town offers a feast for eyes and palate 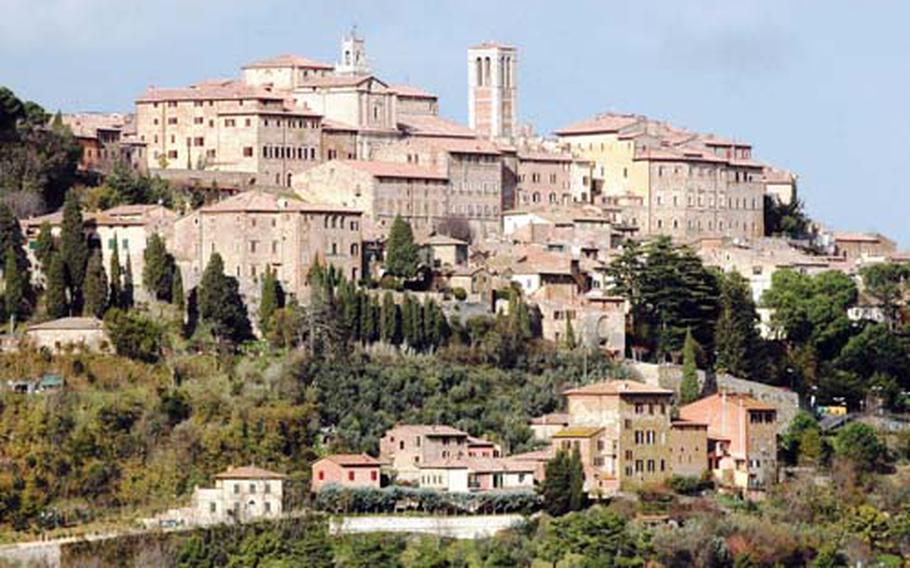 Considered one of the most beautiful hilltop towns in Italy’s Tuscany region, the ancient Etruscan city of Montepulciano perches above the rolling, picture-book hills of the Val di Chiana. (Sandra Jontz / S&S)

Considered one of the most beautiful hilltop towns in Italy’s Tuscany region, the ancient Etruscan city of Montepulciano perches above the rolling, picture-book hills of the Val di Chiana. (Sandra Jontz / S&S) 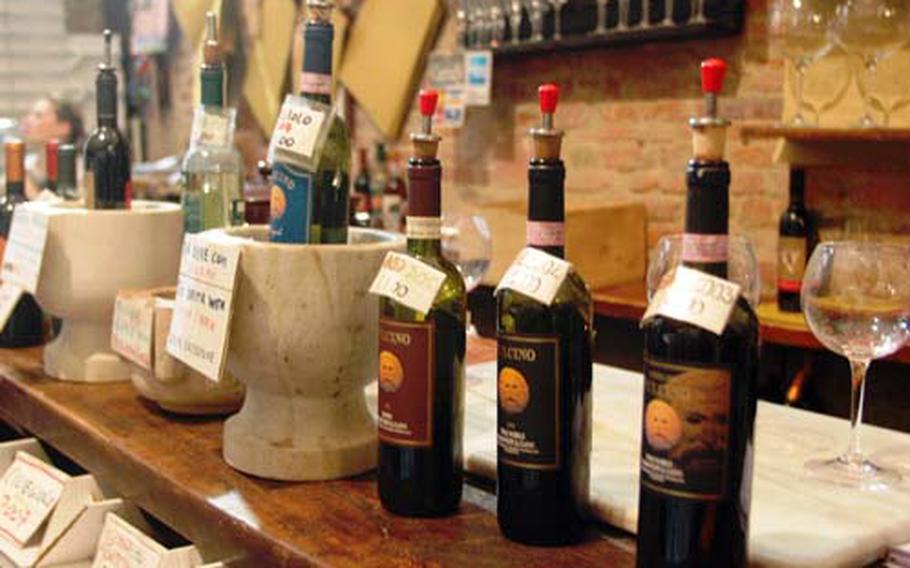 Wine and its byproduct, grappa, are found in abundance in Montepulciano and the surrounding areas. (Sandra Jontz / S&S) 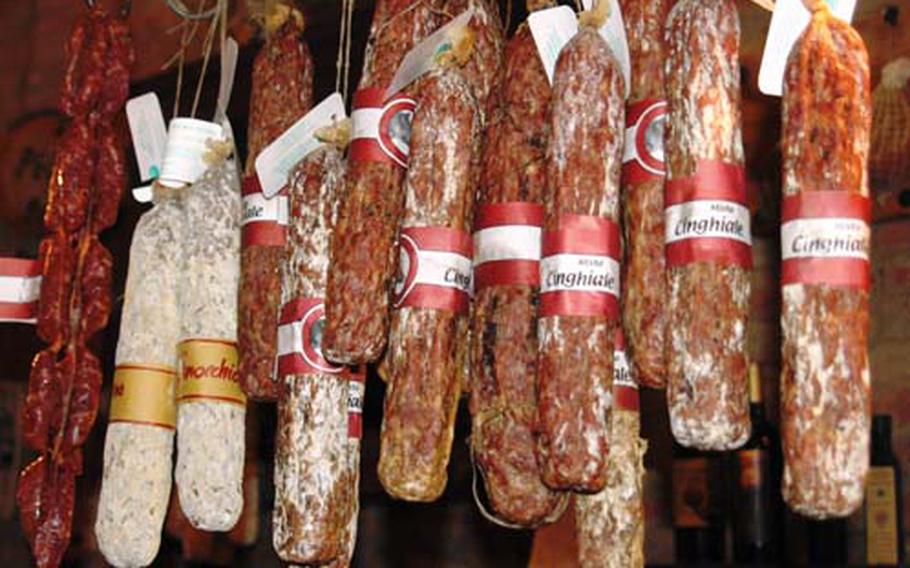 Wild boar salami, a specialty of the region, hangs in one of many shops peddling locally produced products from Montepulciano. (Sandra Jontz / S&S)

Come hungry. You&rsquo;ll be in for a treat.

Montepulciano, Italy, is considered one of the most attractive hilltop towns in Tuscany. It is an ancient Etruscan city perched atop Monte Poliziano, overlooking the picture-book-perfect rolling hills that are synonymous with the region.

And if the stunning views aren&rsquo;t enough to lure you to the ancient city, then perhaps the locally produced, mouthwatering foods will. Or the wines. Or the honey. Or the olive oil. Or the cheeses.

I made a return, roughly four-hour trip from Naples to Montepulciano (pronounced MON-te-pool-chee-a-no) for the pecorino cheeses alone. OK, that and the wild boar sausages and salamis.

Pecorino, made from sheep&rsquo;s milk, is a prized production in the Val d&rsquo;Orcia and Val di Chiana areas of Tuscany, and comes in myriad flavors and textures, both hard and soft.

Cheese makers use some of the same techniques that were employed centuries ago. With the city quite a distance from the sea &mdash; by the standards of the day &mdash; residents had restricted access to the food-preserving attributes of salt, so they devised a way to age and sustain their cheese by wrapping the product in walnut or grape leaves, sprinkled with spices, or covered in ash, the most popular method.

The cheese is complemented perfectly by an ample supply of honey and jams, and appropriately accompanies the sausages and salamis made from wild boar (cinghiale &mdash; pronounced cheen-ghee-ah-leh). Imagine, salami flavored with truffles. Mouthwatering, no?

But there is much more to the ancient Etruscan city than cheese, salami and wine, said Elisa Biagianti, who runs the city&rsquo;s tourist office.

The area also is known for its thermal baths and treatments, both in Montepulciano and Chianciano Terme.

While late spring and summer are the best times to visit Montepulciano, when stores don&rsquo;t close for afternoon riposo, for example, those are also the times of year when the city is most crowded, Biagianti said. While the weather can be damp and chilly during the winter, visitors still have access to the museum, churches, buildings, theater &mdash; and of course, restaurants and eateries that offer ample supplies of the region&rsquo;s delectable cuisine.

Times: Best times of year to visit &mdash; but also the most crowded times &mdash; are late spring and summer. Not all treatments offered at the area&rsquo;s spas are available in the winter.

Costs: There are no admission charges for churches, the museum or other public buildings. White-lined parking spaces are free, blue-lined are paid parking.

Food: Options for good eating abound. Many of the shops selling cheese and sausages offer free tastings. Costs at restaurants vary depending on whether you order a pasta dish or go all-out for more than 2 pounds of beef with a steak Florentine. A Florentine steak dinner for two with some house wine and after-dinner grappa at the famed-and-always-booked Osteria Acquacheta on Via del Teatro will cost about 80 euros. The restaurant is a laid-back joint with a fun crew and wait staff that speak English. Book early.

The tourist office is in Piazza Don Minzoni, near the public parking area. Its staff includes English-speakers. Find an English version at www.prolocomontepulciano.it, the city&rsquo;s Web site. Its telephone and fax number is (+39) 0578-757-341.