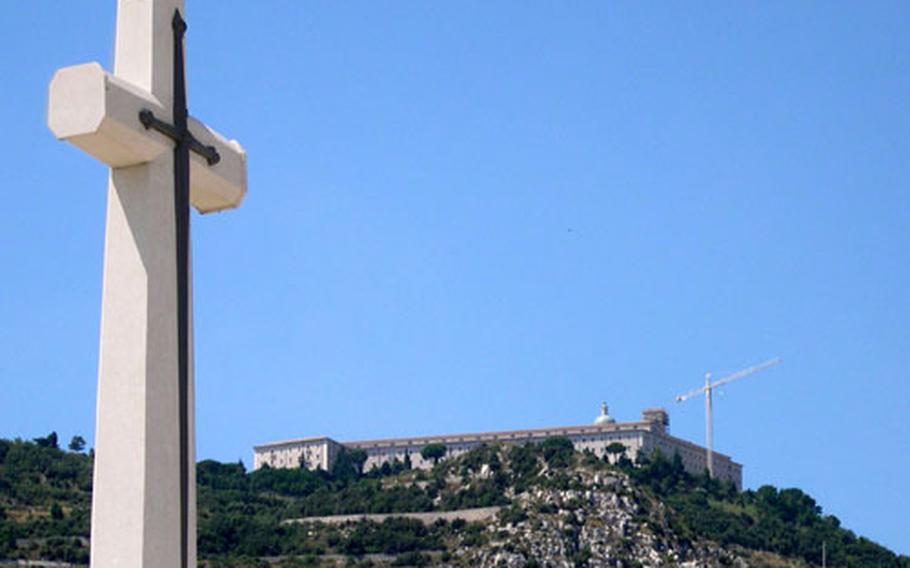 The Abbey of Montecassino sits overlooking the town of Cassino and the British Commonwealth military cemetery, whose marble cross, shown here, overlooks 4,266 graves. In addition to those from the United Kingdom, Indians, Pakistanis, Canadians, Bangladeshis and even one soldier from the Soviet Union are buried in the cemetery. (Jason Chudy / S&S)

The Abbey of Montecassino sits overlooking the town of Cassino and the British Commonwealth military cemetery, whose marble cross, shown here, overlooks 4,266 graves. In addition to those from the United Kingdom, Indians, Pakistanis, Canadians, Bangladeshis and even one soldier from the Soviet Union are buried in the cemetery. (Jason Chudy / S&S) The Abbey at Montecassino has a small shop selling herbal medicine, handmade bath and body products and fruit jellies and jams made by different monastic orders. (Jason Chudy / S&S) Visitors to the Abbey of Montecassino are framed by the Corinthian columns of the abbey well as they walk up marble stairs to the anti-portico of the upper cloister. The upper cloister contains the entrances to the basilica and the abbey museum. (Jason Chudy / S&S) The Statue of St. Benedict in the Montecassino Abbey&#39;s Bramante Cloister was one of the few objects to survive the 1944 bombing and shelling relatively intact. The statue was carved in the 1700s. (Jason Chudy / S&S)

The Benedictine Abbey of Montecassino has been drawing visitors for nearly 1,500 years, not all of them welcome.

Since the Italian abbey’s opening in about 529, it has been destroyed four times, once by earthquake and three times by military forces.

But after each sacking, burning, leveling or bombing, the abbey has been painstakingly rebuilt, the last time over a 10-year period following World War II.

Montecassino is a popular pilgrimage for not only the religious faithful, but also for those interested in the six months of fighting that took place around the abbey in 1944.

The abbey overlooks the small central Italian town of Cassino and can only be reached by a narrow, winding road up the face of the steep mountain.

As it makes its way around the top, the road splits in two. The right branch takes visitors to a Polish military cemetery, where more than 1,000 soldiers killed in the area’s battles are buried. The left leads directly to the abbey.

The outside of the abbey seems imposingly large. Once inside, however, it takes a much more comfortable feel, as it’s divided into four outdoor cloisters. Much of the abbey’s insides are off limits to visitors, but the basilica and museum are open to the public.

The entrance cloister is key to the abbey’s history. St. Benedict founded the abbey on this spot, which at the time was the ruins of a Roman temple, and it was also here where he died. The bronze statue in the center is entitled “The Death of St. Benedict.”

Most of the other cloisters are fairly barren, but the upper Benefactor’s Cloister holds the entrance to the basilica and museum.

Masses are still held in the basilica. Visitors can attend three of them, at 9 a.m., 10:30 and noon. Vespers, which are psalms sung by the monks, are held every evening.

The small museum, located just outside the basilica’s entrance, has objects from throughout the abbey’s history, and even some from the area’s Roman days.

The abbey also has a bookstore and souvenir shop as well as a small store with herbal medicines, body products and fruit jams and jellies made by different monastic orders.

There is no eating, drinking or smoking allowed and there is a dress code that excludes shorts or sleeveless shirts.

The entire abbey can be walked through in about than an hour, but the intricate art of the basilica, exhibits in the museum, and staying for a mass can easily make the visit a full morning or afternoon.

Directions: Cassino is 60 miles north of Naples’ Capodichino complex via the A-1 Autostrada, which costs 4.30 euros each way. At the Cassino exit, turn left and follow the road to the town’s center. As you near town, find and follow the brown “abbazia di Montecassino” signs to the top of the mountain. There is parking at the cemetery and the abbey.

Trains for Cassino leave from Napoli Centrale almost every hour.

Cost: There is no admission fee, but donations are accepted. Parking near the abbey costs 1.20 euro.

Food: There is nothing to eat or drink at the abbey itself, but there are many restaurants and bars in the town.

Info: Detailed guidebooks can be purchased for a few euros at the abbey’s entrance or bookstore and will make a visit much more worthwhile.

More information is available at: http://www.officine.it/montecassino/main_e.htm