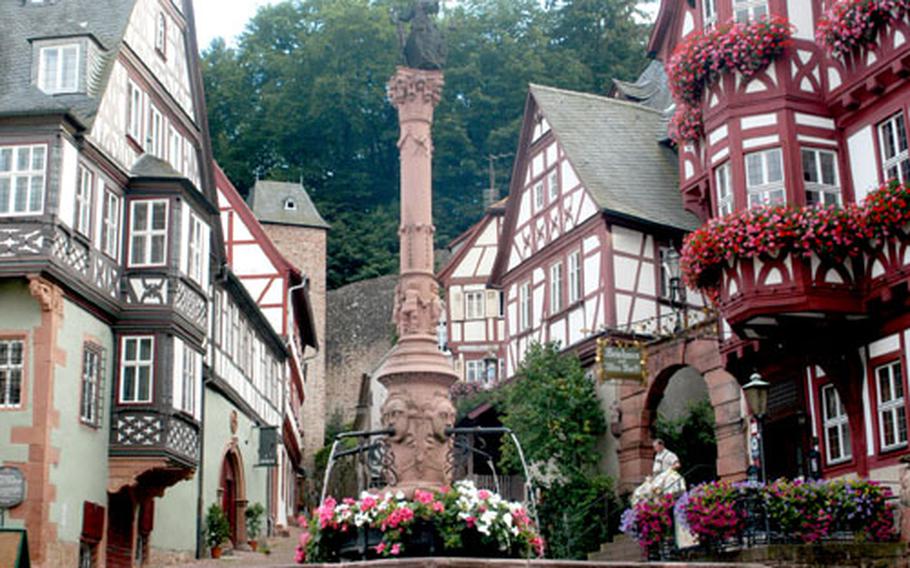 The showcase of Miltenberg, Germany, is its market square with half-timbered houses and Renaissance fountain. (Peter Jaeger / S&S)

The showcase of Miltenberg, Germany, is its market square with half-timbered houses and Renaissance fountain. (Peter Jaeger / S&S) 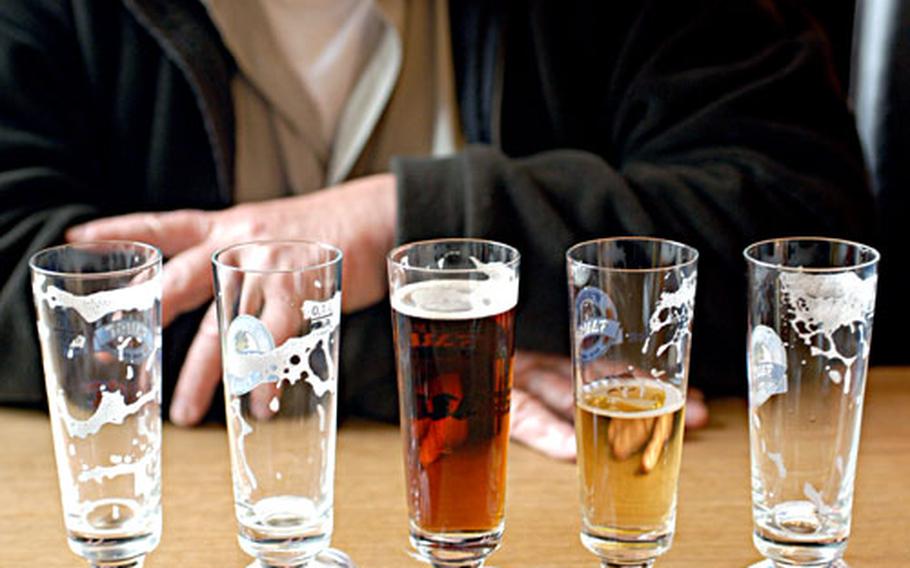 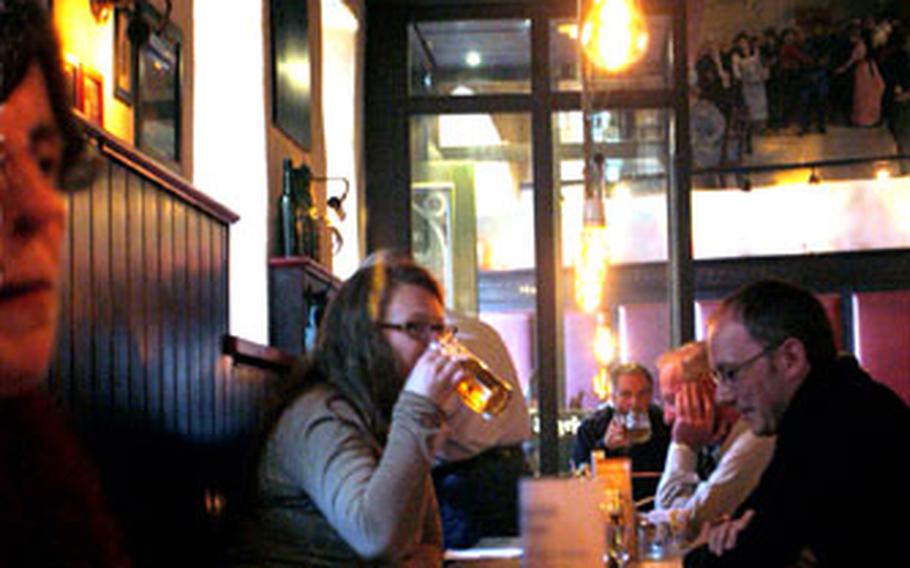 The inside of the Riesen beer hall. (Peter Jaeger / S&S) 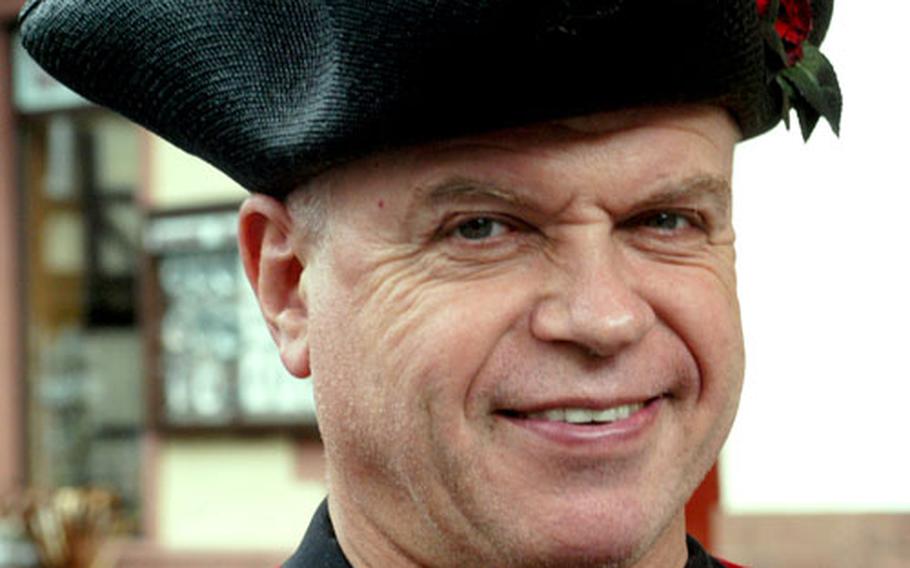 You don&rsquo;t have to go all the way to Rothenburg ob der Tauber to see a pretty German town dressed for the holidays. Miltenberg has it all.

The medieval marvel is one of the most attractive smaller towns in the center of Germany, impressing tourists with its cobbled streets and old architecture dating to the 13th century. The old town is ideal for walks and sight-seeing &mdash; the center is closed to traffic and provides spectacular scenery and unforgettable atmosphere in a small area.

Located on the southern shore of the Main River about 60 miles southeast of the busy metropolis of Frankfurt, Miltenberg&rsquo;s attraction is a combination of its setting, sights and ambiance.

One of the highlights is the market square, which features half-timbered houses and a Renaissance fountain. Sitting above it is the Miltenburg castle. The scene is popular with artists, photographers and publishers of travel books and calendars, which often feature photos of the square.

The town museum, at Hauptstrasse 169, is known for its well-organized exhibitions of Miltenberg&rsquo;s past and culture. Advent calendars from the past 100 years are now on display.

Another highlight is the restaurant and hotel Zum Riesen, one of the oldest guest houses in Germany. Erected in 1590, the Riesen&rsquo;s interior recently was renovated by the Faust brewery, which is located down the street. This year the owners of the brewery, which offers group tours with beer tasting, earned first prize in a local architectural contest called &ldquo;New Life in an Old Place.&rdquo;

The Riesen offers traditional German food and 10 beer specialties from Faust in a very cozy atmosphere: German Gem&uuml;tlichkeit at its best. From its extensive menu, try the Bierbrauerpfanne (Brewer&rsquo;s platter) &mdash; a variety of pork filets, turkey filet and a small sausage with bacon, R&ouml;sti (fried potatoes) and salad &mdash; for 12.50 euros.

Wash it down with a Riesen Spezial, an amber-looking beer, or the famous Doppelbock from Faust, a dark, strong brew, specially made for the Christmas season. Heaven in a glass!

The annual Christmas market, held in the center of Miltenberg on Advent weekends and ending Dec. 18, is small but has all the attractions of a traditional market.

Last but not least, visitors can take a tour of Miltenberg with a man who claims to be the only singing guide in Germany. Willy Herth, dressed in a historical costume, helps to make your stay in Miltenberg unforgettable by guiding you about, singing and chatting in English.

On the QTDIRECTIONS: From the Frankfurt area, follow autobahn A3 toward W&uuml;rzburg/ Nuernberg and leave the autobahn at Stockstadt, Exit 57. Route 469 leads directly to Miltenberg, about 25 miles away. From A5, exit at Heppenheim and follow Route 47 east to Amorbach and then Route 469 to Miltenberg.

TIMES: Miltenberg is worth a visit year-round, but especially in December, when the Christmas market is held on all four Advent weekends. It is open 2-7 p.m. Fridays, 11 a.m. to 8 p.m. Saturdays and 11 a.m. to 7 p.m. Sundays. The museum&rsquo;s winter hours are 11 a.m. to 4 p.m. Wednesday through Sunday.

FOOD: Miltenberg offers many culinary options. The highlight is the Riesen, a 500-year-old beer house.