Merzig: To study wolves, he must become one, says owner of Wolfspark 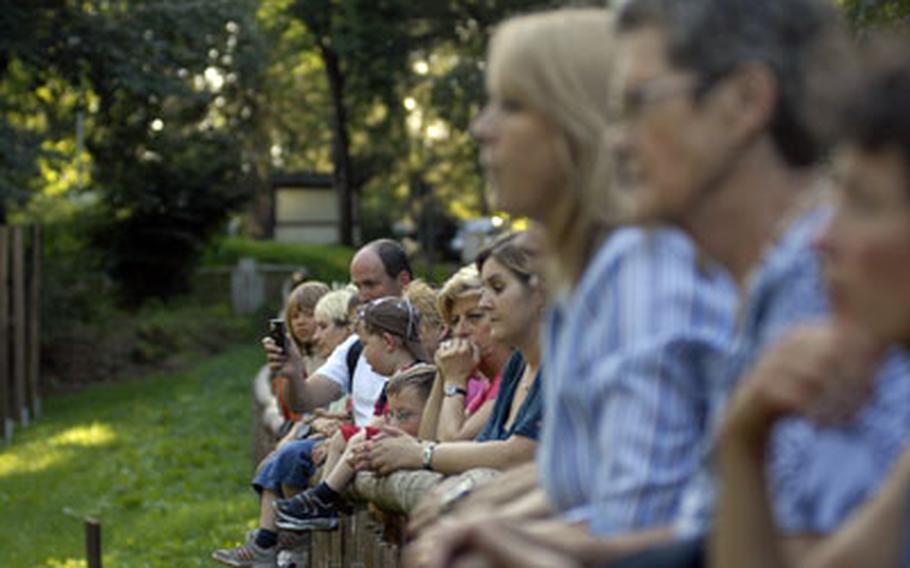 A crowd gathers to watch Freund interacting with the wolves. People are welcome to stroll past the enclosures on a network of trails during the park’s opening hours, between sunup and sundown ()

A crowd gathers to watch Freund interacting with the wolves. People are welcome to stroll past the enclosures on a network of trails during the park’s opening hours, between sunup and sundown () 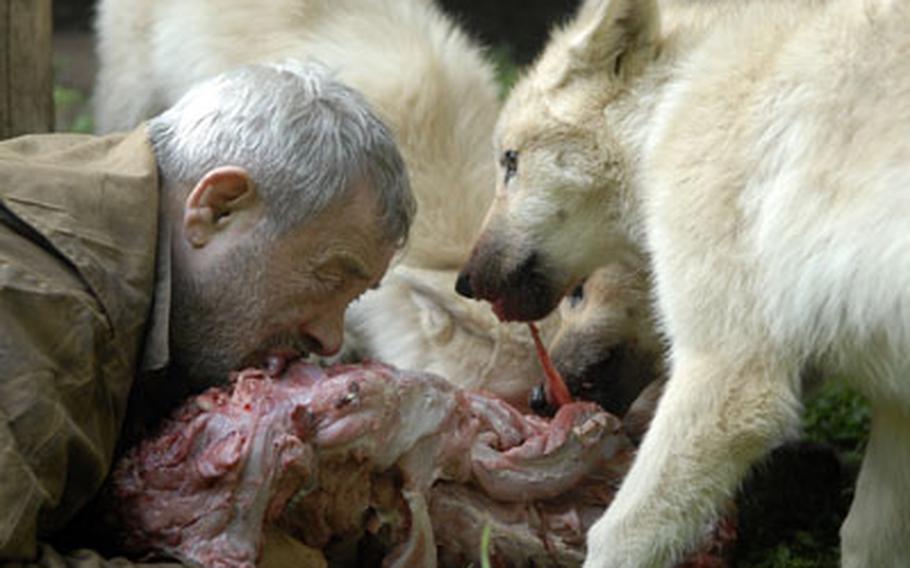 Buy Photo
No, he’s not eating. Freund is holding onto a meat carcass with his hands and mouth while a pack of Arctic wolf pups feed on it. Freund brings the meal to the wolves just as the alpha female would, a role he’s assumed since raising the pups from soon after birth. He “becomes” a wolf to better study them. (Photos by Jennifer H. Svan/Stars and Stripes) 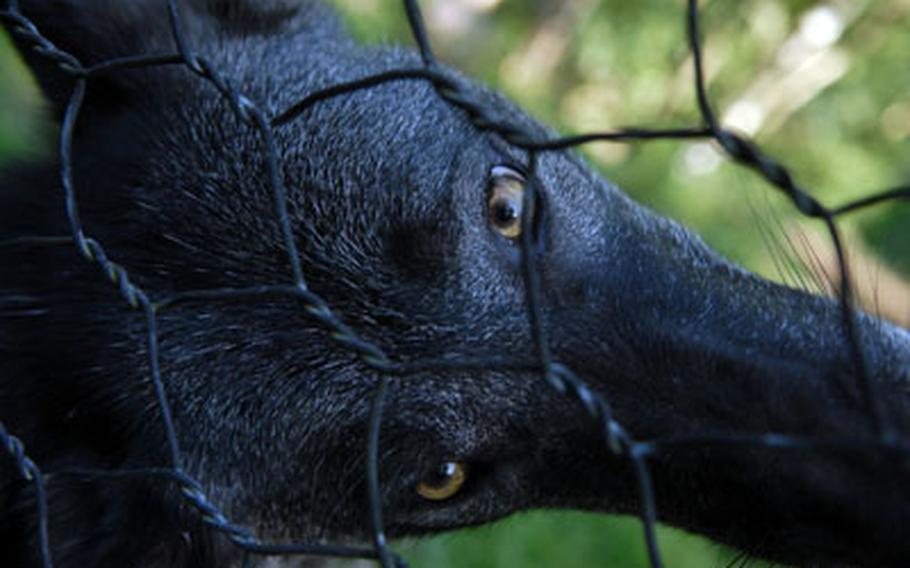 A timber wolf cocks his head behind the fence in his enclosure at Wolfspark Werner Freund in Merzig, Germany. () 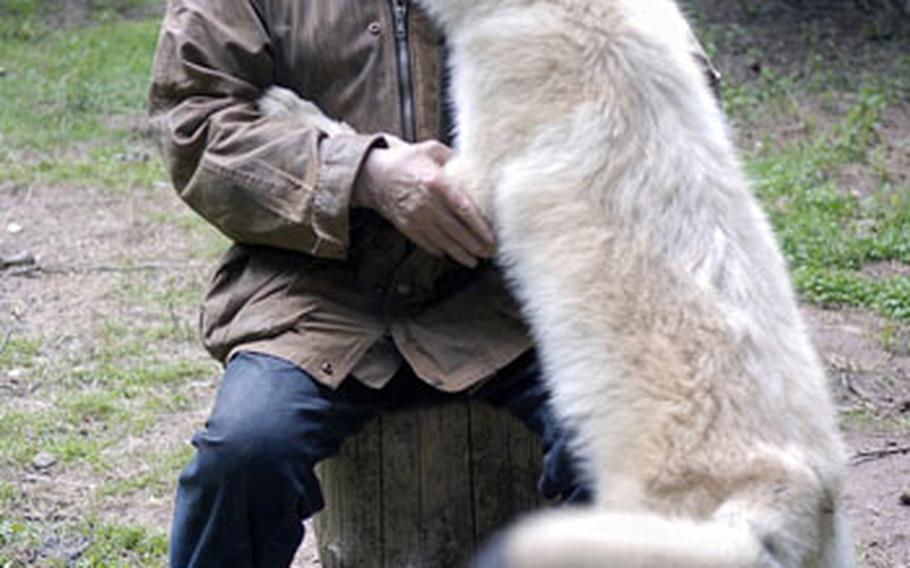 In a sign of submission, an Arctic wolf pup licks German wolf researcher Werner Freund on the face while Freund visits with the animal in its enclosure at Wolfspark Werner Freund in Merzig, Germany. () 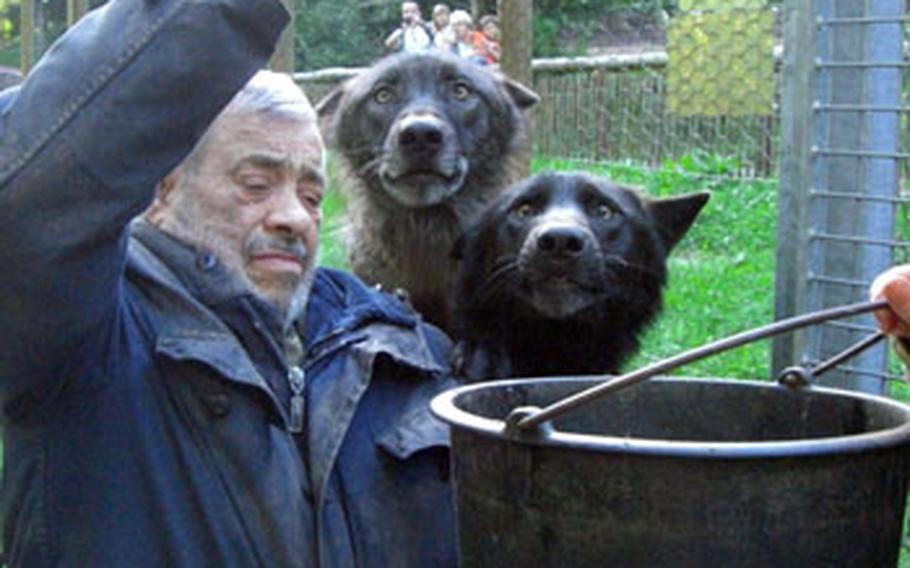 The wolves surrounding Freund can hardly hold themselves back as he tosses them fresh, raw chickens. ()

It&rsquo;s clear who the dominant "wolf" is among the pack of hungry pups.

The one in charge lies on the ground, holding the slab of calf meat firmly in his teeth while the fair-coated Arctic canines tear off pieces of raw tendon and flesh. Between bites, they crawl playfully over his back all the while adhering to the group hierarchy, which means they don&rsquo;t abscond with the meal, however tasty.

The alpha doesn&rsquo;t eat. While he may smell like a wolf, howl and yelp like a wolf, and certainly demonstrates he can think like a wolf, the alpha is different in one very fundamental way: He&rsquo;s a human named Werner Freund.

"When I am with the wolves, I become a wolf," Freund says matter-of-factly. He is, as his book on wolf research is titled, Germany&rsquo;s "wolf man."

At 76, Freund is gray and grizzled like the creatures he has lived among for more than 30 years. Over the course of his lifetime, he has been many things, including a professional gardener, a German army sergeant, bear caretaker and world traveler.

His wolf man phase began later in life, five years after he settled in Merzig, Germany, in 1972. With land borrowed from the city, Freund and his wife, Erika, created a refuge for wolves in the neighboring Kammerforst forest. Wolfspark Werner Freund is currently home to more than 20 wolves from Europe, Siberia, Canada and elsewhere.

The wolves are acquired as cubs from zoos or animal parks, typically when they&rsquo;re 10 to 14 days old. Freund, who&rsquo;s raised more than 70 wolf pups, sequesters them from the public for six months, sleeping with them and feeding them by bottle every two hours until they&rsquo;re ready for their first bites of meat. With such close interaction, the cubs think Freund is the she-wolf, or the alpha female of the pack. It&rsquo;s a bond that lasts for the wolves&rsquo; lifetime and it&rsquo;s why Freund can freely enter their territory and study their behavior up-close.

While humans may be able to train dogs, "you can&rsquo;t domesticate a wolf," Freund says. "I had to become a wolf" to be able to interact with them.

Freund says wolves, who live about six years in the wild, live longer at his center. One died there at age 17 this summer.

When Freund visits his wolves, he is meticulous about hygiene, a hard-earned lesson taught to him by the wolves.

One day he entered the territory of an alpha female Arctic wolf and her pack, and soon after went into another pack&rsquo;s area, without showering. The dominant female in the second enclosure picked up "the smell of her opponent and suddenly she jumped high and bit me in the ear," Freund recalls. "I had to fight with her and after the fight she came up to me and licked the blood dripping from my ear. That was a clear sign of her submission."

Freund and his human assistants live in their own den on the park grounds, a cozy house where domestic cats have free rein and the wall decor in the living room reveals a lifetime of adventure and a love of all things wild.

Visitors may see the wolves for free &mdash; and perhaps catch a glimpse of the wolf man &mdash; during the park&rsquo;s operating hours between sunup and sundown. Trails go past seven different fenced enclosures, inside of which like breeds of wolves live as packs. Though physically separate, the wolves often join one another in a chorus of spine-tingling howls that echo through the park. Visitors may even be lucky enough to spy Freund in the act. Howling, after all, is a form of bonding, Freund says.

Normally, visitors cannot mix with the wolves as Freund does. But there are exceptions.

On one day in late July, Freund invited a reporter to join him inside the Arctic pups&rsquo; enclosure. The opportunity would afford the chance to observe and photograph Freund and the wolves interacting up close.

Entering the wolves&rsquo; realm required a specific &mdash; and smelly &mdash; dress code. A sweater that held the wolves&rsquo; scent and had to be worn, as did tall rubber boots caked in mud, dried blood and who knows what else. The combination was a jolt to the human nose but a treat for the wolves. They only stopped licking the stranger&rsquo;s boots when Freund brought out the main course, a chunk of raw beef.

As Freund held the meat for the dining wolves, the reporter shot photos, at one point lying nearly flat on the ground to get a good angle, figuring the wolves would pay no heed while eating. But curiosity got the best of some, and soon the wolves were walking over the reporter, licking her face and camera and trying to pull out her hair bands. They succeeded. Though clearly strong, the wolves remained playful and friendly and never aggressive.

That&rsquo;s the side of wolves Freund wants the public to see, though from a more distant vantage. He is driven by a quest to give people a better understanding of the animals he loves so dearly.

"There is this image of the evil wolf but this is too far from reality," he says. "Wolves kill in order to have something to eat, so do other animals." Wolves, like people, are social creatures, Freund says.

His long-time assistant, Tatjana Schneider, adds: "Humans could learn a lot from wolves. They (wolves) stick together and try to survive.

Freund, she says, "wants to show and tell people about what the wolf really is, what it stands for."

Know and GoWolfpark Werner Freund is in Merzig, Germany, about an hour west of Kaiserslautern in the Kammerforst forest.

It is open daily, year-round, between sunup and sundown. Admission is free. Signage in the park is in German.

A free guided tour of the park is offered the first Sunday of every month at 4 p.m. throughout the year.

Werner Freund sometimes will feed and interact with the wolves for large groups &mdash; about 40 or more &mdash; for 2.50 euros per person. Arrangements may be made in advance by contacting Freund&rsquo;s staff by e-mail at wolfspark@gmx.net, or by telephone at 06861-911818.

For more information, visit the park&rsquo;s Web site at www.wolfspark.com.