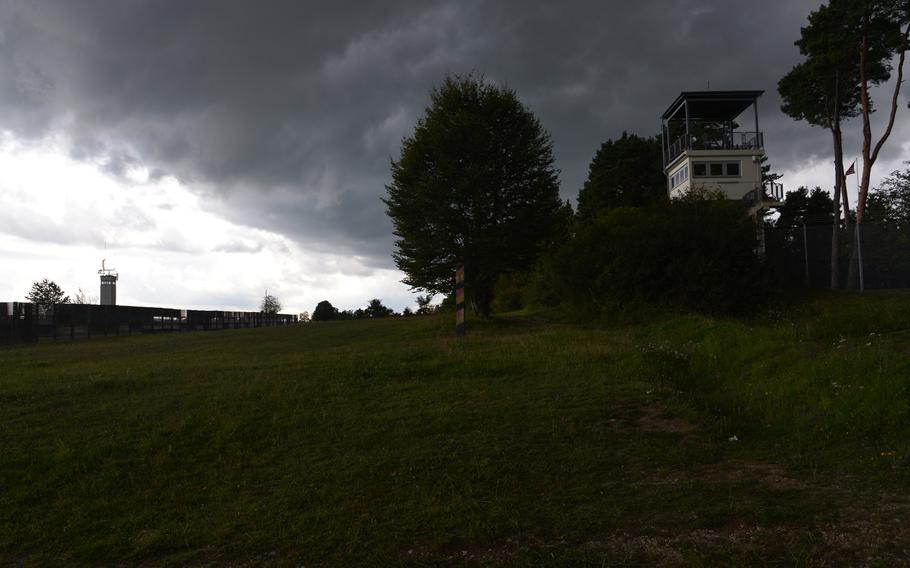 The East German observation tower, seen in the distance at left, and the American tower, on the right, stand almost face to face across what was once the inner-German border during the Cold War. Today, both are part of the Point Alpha Memorial. (Michael Abrams/Stars and Stripes)

The East German observation tower, seen in the distance at left, and the American tower, on the right, stand almost face to face across what was once the inner-German border during the Cold War. Today, both are part of the Point Alpha Memorial. (Michael Abrams/Stars and Stripes) 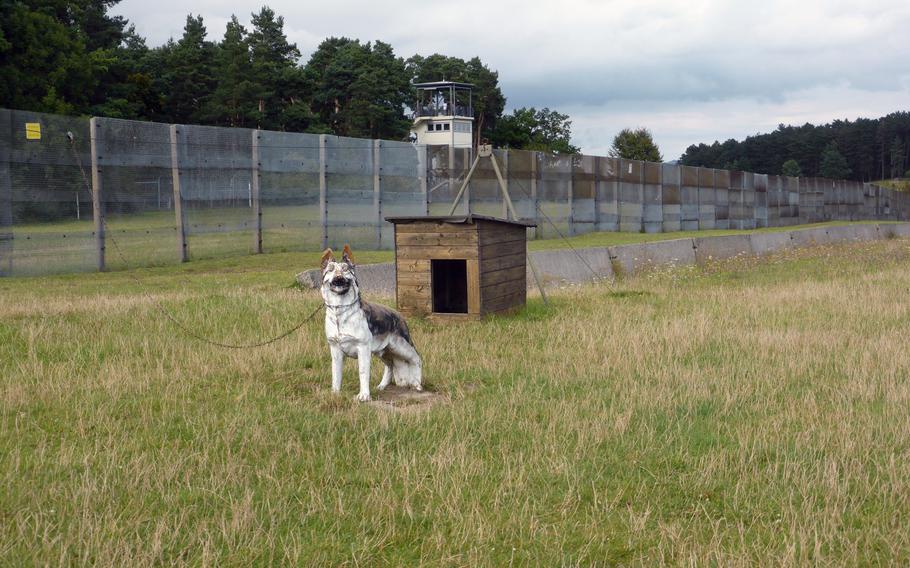 A model watchdog shows how the inner-German border was guarded during the Cold War. In the background is the American tower at Observation Point Alpha. The whole area today is part of the Point Alpha Memorial. (Michael Abrams/Stars and Stripes) 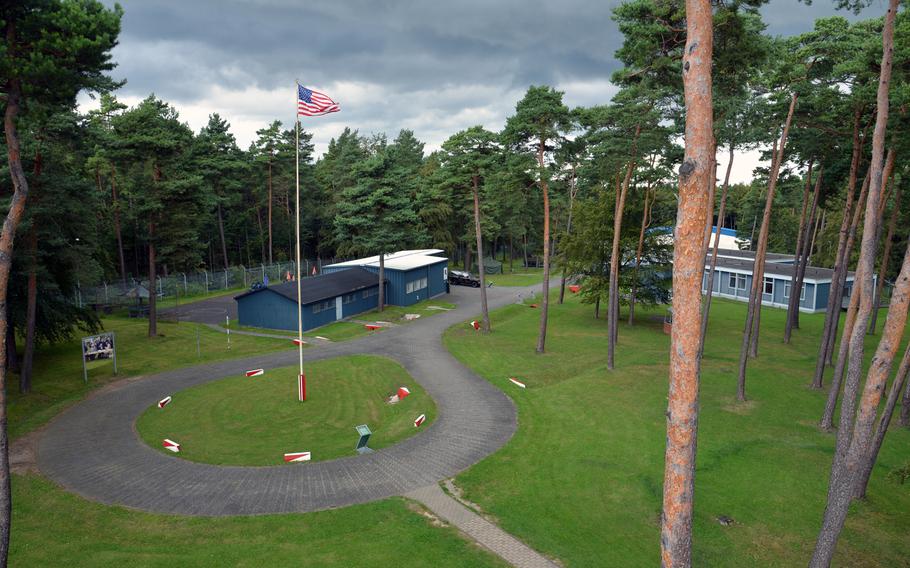 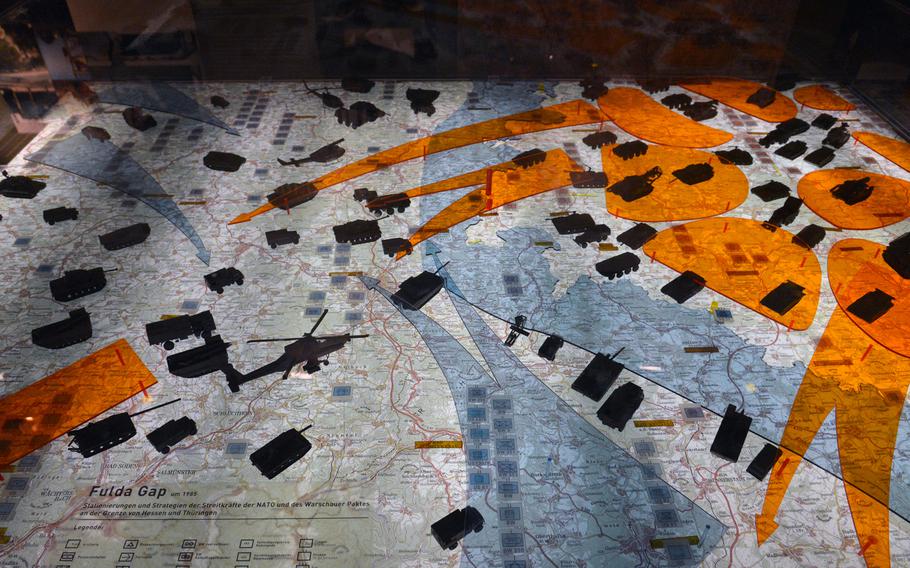 A map in the museum at Point Alpha Memorial shows forces of NATO, left, and Warsaw Pact face-to-face across the Fulda Gap. (Michael Abrams/Stars and Stripes) The East German observation tower as seen from the American tower looking from what was West Germany into East Germany. Today both towers are part of the Point Alpha Memorial. (Michael Abrams/Stars and Stripes) It was a lonely outpost on a chilling border that could go hot at any time.

On a hillside observation tower overlooking East German fields, a small band of U.S. Army soldiers would keep watch across a tall wire fence that was a part of the Iron Curtain.

Across from them, East German border police in a similar tower watched over the inhumane death strip with guard dogs and fragmentation mines meant to keep their fellow citizens from escaping. And they would train their binoculars on the Americans at Observation Point Alpha.

OP Alpha, on the border between West and East Germany, was first manned by U.S. Army constabulary units, remnants of the once giant World War II fighting force, in 1946. In 1951 they were replaced by soldiers from the 14th Armored Cavalry Regiment, and they, in turn, were replaced through reflagging of the unit by the 11th Armored Cavalry Regiment.

The observation point was manned by about 40 men who rotated in for four to six weeks from posts in Fulda, of “Fulda Gap” fame, about 19 miles away. The area was seen by NATO planners as the most likely invasion route into Western Europe for Soviet bloc forces.

The soldiers spent their days patrolling the border and observing it from the tower. If the Cold War had gone hot, they could have been the first to feel the brunt of a Warsaw Pact attack.

Then one day, Nov. 9, 1989, the Berlin Wall crumbled, the Iron Curtain fell, the Cold War was over and Observation Point Alpha was obsolete.

By March 1990, the patrols and observation of the border had ceased.

Today the OP, a reconstructed strip of the border fortifications with the East German tower and a new building, the House on the Border in what is now the German state of Thuringia, make up the Point Alpha Memorial.

It’s best to start on the eastern side of the border where the House shows what life on that side was like. You can then walk the former patrol road past reconstructed samples of the border fortifications over the decades until you get to the East German guard tower and the final wire fence. Signs along the way describe what you are seeing.

Near the American tower stands a birch cross that marks a failed attempt by an East German in 1975 to escape to the West. Today it is dedicated to all of the victims of German division.

At OP Alpha, to get an idea of what the soldiers saw, climb the tower to the viewing platform for a look at the border and the town of Geisa. Then walk around the outpost. Check out the red line across the pavement, a barrier between East and West Germany that American tanks were not allowed to cross. Only jeeps and other small vehicles were allowed to cross.

An M60 tank, an M113 armored personnel carrier and a tent, similar to ones used before the barracks were built, also help visitors get an idea of what life was like at the outpost.

Inside one of the barracks is a museum that features the history of the Cold War and soldiers’ uniforms and equipment. Also on display is a barracks room (note the pin-up girl) and what would have been the commander’s office. A motor pool hangar and a guardhouse stand at the original entrance to the outpost.

The Memorial of German Division and Reunification, erected in 2000, stands as a reminder of the country’s history.

Today, the Point Alpha Memorial is a monument to a reunited Germany and the soldiers who once served at a lonely outpost on freedom’s border.

FOODThere is a small cafeteria on site. There are restaurants in Rasdorf and Geisa.