Seehof Palace sits atop a hill and can be seen from Memmelsdorfer Strasse. Guided tours of the palace’s staterooms are available from 9 a.m. to 6 p.m. daily except Mondays. (Rick Emert / S&S)

Seehof Palace sits atop a hill and can be seen from Memmelsdorfer Strasse. Guided tours of the palace’s staterooms are available from 9 a.m. to 6 p.m. daily except Mondays. (Rick Emert / S&S) This elaborate fountain, with Seehof Palace in the background, springs to life at the top of every hour from 10 a.m. to 5 p.m. from May to October. (Rick Emert / S&S) 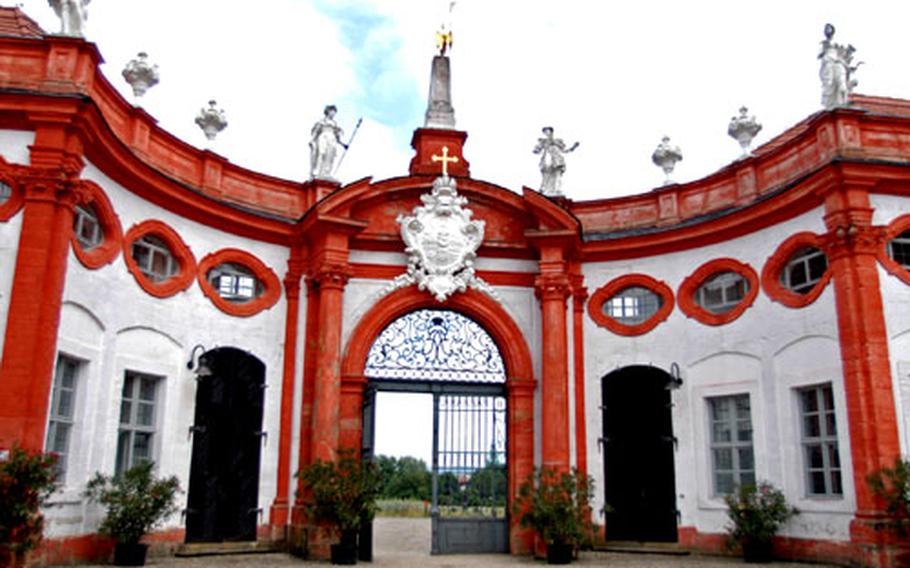 The entrance to Seehof Palace and park is decorated with some of the many sculptures that adorn the park’s walkways and buildings. (Rick Emert / S&S)

Through a child&rsquo;s eyes, Seehof Palace and Park in Memmelsdorf, Germany, is a wonderland of gargoyles, dragons and other mythical creatures captured in about 50 statues and hundreds of smaller sculptures.

For those slightly older &mdash; including adults &mdash; the park is an awesome sight with an incredible fountain, shaded walking trails and shrubbery mazes.

A trip to Seehof Palace and Park is an excellent, active way to spend a morning or afternoon without dipping into the pocketbook &mdash; unless you decide to tour the palace&rsquo;s staterooms, or have something to eat or drink at the park&rsquo;s restaurant.

The history of the palace begins in the 15th century when the site housed a country home surrounded by fish ponds, woods and fields. Building of the palace complex began in 1687 under Prince-Bishop Marquard Sebastian Schenk von Stauffenberg, and the palace eventually became known as Marquardsburg. It was modeled after the palace at Aschaffenburg.

The building was completed in 1696 under Prince-Bishop Lothar Franz von Schoenborn.

The prince-bishopric was dissolved in 1802, and the palace became the property of the kingdom of Bavaria. It was sold to a private owner in 1840, and then bought back in 1975 by the Free State of Bavaria. Much of the sculptures and artwork had been sold, and the complex was in a state of deterioration.

Over the past 30 years, the palace has been slowly restored to its condition during the period of the prince-bishopric.

Guided tours offer a look into the staterooms that made up a summer home for prince-bishops from the late 17th century to the early 19th century.

&ldquo;The tour sometimes runs a little longer than 40 minutes, depending on the interest of the group,&rdquo; said guide Kristin Nurnberger. Although there is no age limit for children, she said that those under 8 might not find the tour interesting.

The rooms have some original artwork and furniture, but much of it has been re-created to match the style of the period.

No flash photography is allowed during the tour, and tour members must stay together. In certain rooms of the palace, such as the White Hall, tourists are required to wear provided slippers to protect the parquet floor.

English-language tours are available, but those interested should call in advance to determine when they are offered, Nurnberger said.

&ldquo;It is better for anybody who wants an English tour to call ahead and reserve it,&rdquo; she said. &ldquo;That way they are sure that an English-speaking guide will be available.&rdquo;

While the tours offer a glimpse into how the prince-bishops lived, the park may be of more interest to families.

Visitors should plan to see the waterworks fountain at the top of the hour at some point between 10 a.m. to 5 p.m. to catch the full display of the fountain. Water pours from 20 statues in the fountain during the 10-minute display.

There are plenty of walking trails to explore while waiting for the fountain. There also is a cafe-style restaurant in the complex with reasonable prices and various sculptures, including gargoyles, for sale.

Visitors who want to make a free day of it can skip the tour and take their own lunch to eat in the park, to which there is no admission fee.

DIRECTIONS: From Warner Barracks in Bamberg, take Memmelsdorfer Strasse off Berliner Ring and follow it to Memmelsdorf.

Seehof Palace is on the right; follow signs for Schloss Seehof to find parking.

Seehof Palace is about two miles northeast of Bamberg, and about 10 minutes from Warner Barracks.

COSTS: Entry to the palace grounds is free.

Guided tours of the staterooms are 3 euros for adults, 2 euros for seniors, students and children under 18.

FOOD: A cafe-style restaurant offering meals, pastries and drinks is on the palace grounds.