Mardin: Dozing in the ancient sun 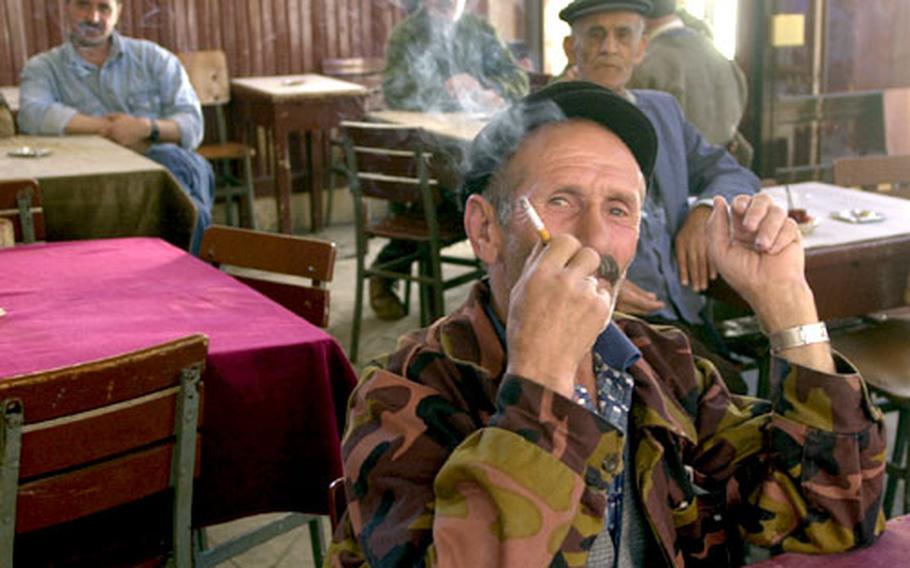 Tea houses in the conservative southeast of Turkey are still male-only bastions of smoking and political debate. (Terry Boyd / S&S)

Tea houses in the conservative southeast of Turkey are still male-only bastions of smoking and political debate. (Terry Boyd / S&S) 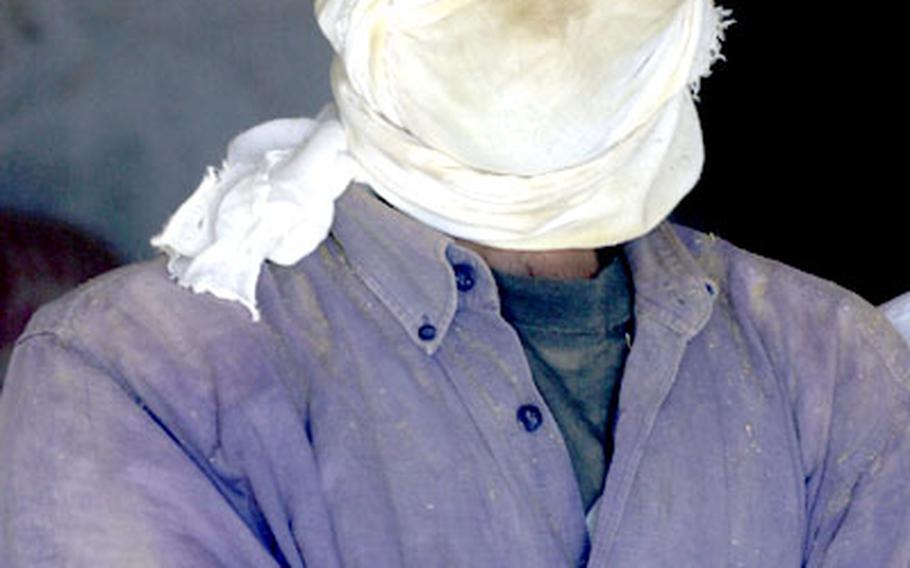 A farmer wraps his face to keep out the dust of a late spring wheat harvest. Farmers in this fertile area may grow a total of 11 different crops through four seasons. (Terry Boyd / S&S) 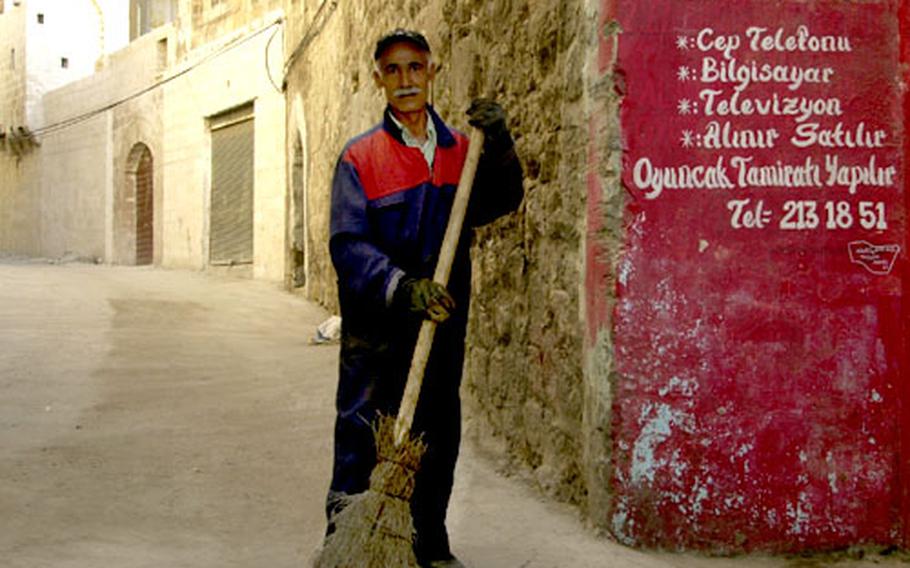 It is daybreak, and Mardin is already coming alive with tea vendors, taxi drivers and street cleaners. This man was preparing an alley in the Old City for another day of commerce. (Terry Boyd / S&S) 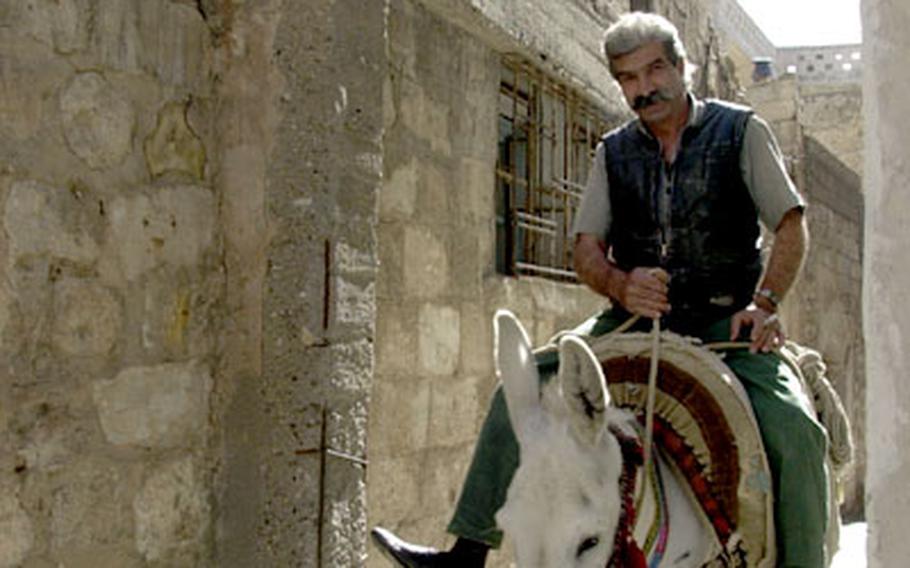 Many of Mardin’s streets are so narrow that auto traffic is out of the question. Most people get around on horses, mules or donkeys. (Terry Boyd / S&S) 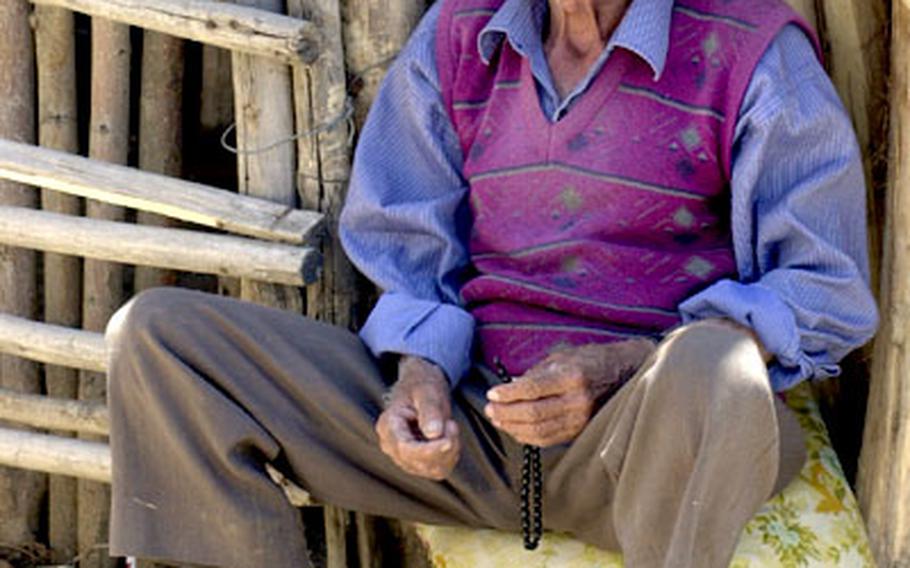 Since southeastern Turkey has virtually no industry, most people survive on agriculture or smuggling goods between Turkey, Syria and Iraq. This man makes about 11 cents an hour stripping the bark off trees that are shipped into Iraq. (Terry Boyd / S&S)

The low, white skyline with its rhythm of Oriental arches and domes unbroken by high-rises reminds me that I&rsquo;m closer to Damascus than Istanbul. Captivated, I find myself driving the eastern approach to Mardin at sunup and sundown, trying to capture its visual poetry.

There is an elusive, aloof purity here. You see it in Mardin&rsquo;s lonely mountain perch and its quiet monasteries. You hear it in the unfathomable language of its churches. You feel it, lost in the catacomb-like alleys and streets of the old city. You try to breath it all in like incense. But it&rsquo;s difficult to reconcile Mardin with the 21st century.

In the interest of full disclosure, I must say that Mardin, Turkey, is not what I would rate a tour-bus tourist stop. The fortress on the peak of the mountain above the city is an off-limits military listening post. There is one museum &mdash; small, but it&rsquo;s in one of the town&rsquo;s loveliest buildings. The most interesting destinations, several Syrian Orthodox churches and monasteries, aren&rsquo;t always open to the public.

But Mardin is a city worth taking a chance on, both for travelers who long for relief from the relentless advance of modernization and for entrepreneurs wagering those travelers will come to one of Turkey&rsquo;s most atmospheric destinations, according to local hotelier Mufit Gozu.

One of the biggest gambles is Gozu&rsquo;s new Erdoba Evleri Hotel, open only a few weeks when we were there last spring.

The Erdoba (AIR-do-baa) unites commercially, if not physically, two huge, flawlessly restored mansions built by two Jewish brothers in the 1870s at the zenith of Mardin&rsquo;s affluence. Gozu and his business partner leased the buildings &mdash; &ldquo;They were basically ruins&rdquo; &mdash; from the city, then invested about $600,000 to create the Edoba &mdash; really two hotels with one name.

Gozu and Mufit Yildiz, partners in a large pharmacy supply business, are betting on a sophisticated clientele who will savor Mardin&rsquo;s essences.

The city is perched on the side of what must be the last mountain for 50 miles. Dropping out right from under your feet is the Mesopotamian plain, with its tributaries to the great Tigris River. Every potentate from Nebuchadnezzar to European kings wanted these food-and-water-sources for their legions.

Moreover, Mardin was a strategic stop on a southern Silk Route. Until perhaps the 1940s, great camel caravans passed through going south to Iran, Afghanistan and on to India and China.

Mardin was a fabulously wealthy town once, and it shows in the elaborate mansions that survive as museums and hotels. Now it is a city preserved not by conservators and curators, but by poverty. Over the last 80 years, the capital dried up as its Christian Arab merchant class dispersed to better opportunities in Lebanon, Syria, Istanbul and the United States.

Like most old Turkish cities, this is a layer cake. But few cities have so many layers still intact: a modern city on top, a Greco-Roman one below. In between, there are layers representing all of the Middle East&rsquo;s great cultures, from Persia to the Ottoman Empire.

&ldquo;Even today, no one is certain exactly which civilizations lived on the Mesopotamian plain,&rdquo; Gozu said.

The icing on the cake is all the carved marble and stone. Many arches in the old town have elaborately carved niches, intrados and extrados.

Everywhere are tiny jewel-like arabesques on walls, arches and everything else, along with inscriptions in Arabic and old Arabic-script Turkish.

Unlike western Turkey, this was &mdash; and still is &mdash; a heavily Christian area; mosques and minarets here are nearly always an afterthought, tacked indifferently onto some abandoned Greek or Syrian Orthodox church.

Unlike much of western Turkey, Mardin has survived intact through centuries of wars, fires, earthquakes and, most insidious of all, developers. It&rsquo;s one of the few towns left with streets so narrow and winding that residents still use donkeys as taxis.

There was a price to pay for Mardin&rsquo;s exotic locale &mdash; this has always been a tempestuous neighborhood. Even today, tourism is stagnant because of the just-ended war between Turkey and Kurdish militants just to the east. Just 30 miles east of Mardin are 50 preserved orthodox monasteries that local officials want to use to lure Christian pilgrims. They can&rsquo;t because of land mines and holdout groups of terrorists who might kidnap tourists, said Omer Ulu, progressive mayor of nearby Nusaybin.

Given all this, there are already signs that Mardin is reviving after slumbering for years in the relentless sun. When we were there, it was difficult to get a room at the Erdoba or anywhere else, for that matter. Tour buses full of Turks, Germans, Scandinavians and Russians jammed up the main street.

In addition to tourists, Turkish pop singer/belly dancer/starlet Sybil Can was shooting scenes for her popular soap opera, using the Erdoba grand rooms for &ldquo;harem&rdquo; scenes because all the real harems in Istanbul are behind museum cordons.

Every one seems to be a captive to Mardin&rsquo;s glorious past, or pasts.

My friend Levent and I were around town at dusk when we came upon a cluster of squabbling, teasing kids. When a pretty teen in a pink Madonna shirt tries to retrieve her 2&frac12;-year-old sister, I can&rsquo;t believe the name she calls.

&ldquo;Gel, Mariam,&rdquo; she says. &ldquo;Come, Mary,&rdquo; as in Mariam, the Arabic version of Mary, mother of Jesus. Sure enough, Mariam was bouncing a ball against the wall of a Christian church.

We pepper the kids with questions about what it&rsquo;s like to be a Christian here. The kids look puzzled by the questions, and answer that it&rsquo;s no big deal. Every one gets along &ldquo;like brothers and sisters,&rdquo; says the teenage girl.

Then, a shuffling, 60-ish man appears out of nowhere and unlocks the church door with a huge brass key. Grumbling, he lectures us in archaic Turkish about how it&rsquo;s bad manners to summon a fellow out of his house at 8 p.m.

&ldquo;What&rsquo;s he saying?&rdquo; I plead to Levent, whose first language is Turkish. &ldquo;I have no [earthly] idea,&rdquo; he says out of the corner of his mouth.

We apologize, but explain we didn&rsquo;t ask anyone to open the church. He accepts our apology and tells us we have his complete respect now.

Three local boys are in the church, reading a script neither Levent nor I recognize &mdash; something between Hebrew and Arabic.

Turning on the church lights, the old man says that after decades of persecution drove out most Surianis, times are good for local Christians. Muslim neighbors even come and join in the ceremonies sometimes. And an American Air Force major had just come down from Ankara with a big donation.

But unlike nearby Iraq and Syria, Turkey&rsquo;s Christian population is tiny. There are only 50 Syrian Orthodox families left in Mardin, less than 200 people out of 50,000. That&rsquo;s in addition to a Catholic community and other Christian groups.

&ldquo;We used to fight in the old days, but there aren&rsquo;t enough (Christians) left to argue anymore,&rdquo; says our guide.

Asked if the Christians of Mardin survive off remittances of those who&rsquo;ve left, he says, &ldquo;No. We have no outside support. We do it all ourselves.&rdquo;

Asked how long there will be Surianis in Mardin, he shrugs and says, &ldquo;Only God knows.&rdquo;

There is a sense of enduring humanity here.

At dinner that night, just as in &ldquo;Arabian Nights,&rdquo; hotelier Gozu weaves a dozen stories from memory. He tells how the daughter of a Babylonian king demanded that the Persian king Darius figure out how to provide her with the rare grapes from her homeland in what is now Iraq before she would go with him to Persia.

The waiters &mdash; all locals &mdash; begin to gather around our table to listen, their eyes reflecting the candlelight amid the cavernous vaulted ceilings of the Erdoba&rsquo;s dining room.

Nodding their head as if just having watched a good movie, the waiters drift back to their chores.

&ldquo;You see!&rdquo; Gozu says in a whisper as they depart. &ldquo;This place is interesting to people whose families have lived here for hundreds of years and don&rsquo;t know what happened beneath their feet!&rdquo;