A model depicts the formation of thousands of clay soldiers found in Lintong County, China. The terra cotta army was crafted more than 2,200 years ago for Emperor Qin Shi Huang. (Rick Scavetta / S&S)

A model depicts the formation of thousands of clay soldiers found in Lintong County, China. The terra cotta army was crafted more than 2,200 years ago for Emperor Qin Shi Huang. (Rick Scavetta / S&S) 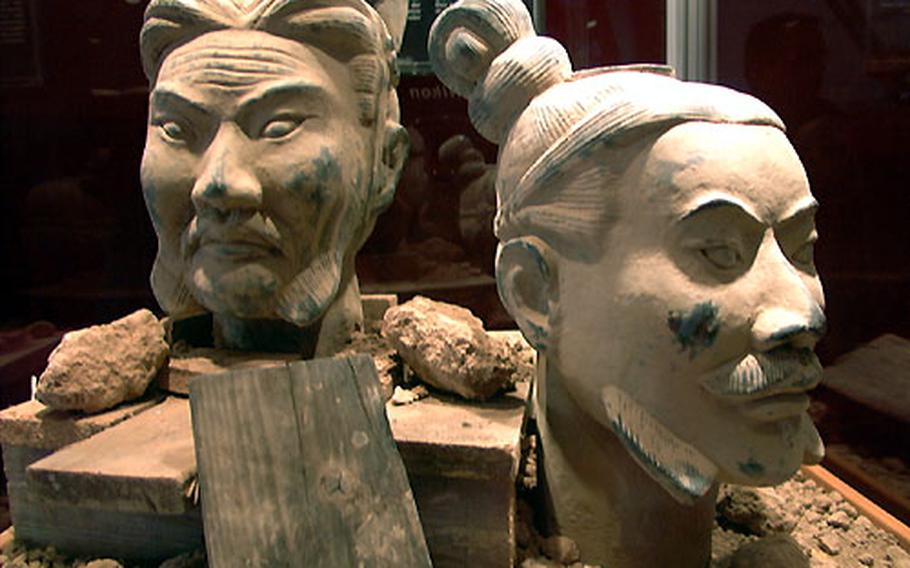 The faces of each soldier in Emperor Qin Shi Huang’s army is unique, suggesting the differing personalities of the ancient warriors. (Rick Scavetta / S&S) The rank of each terra cotta soldier can be discerned by his hairstyle and uniform. Horses stand among the silent troops. (Rick Scavetta / S&S) 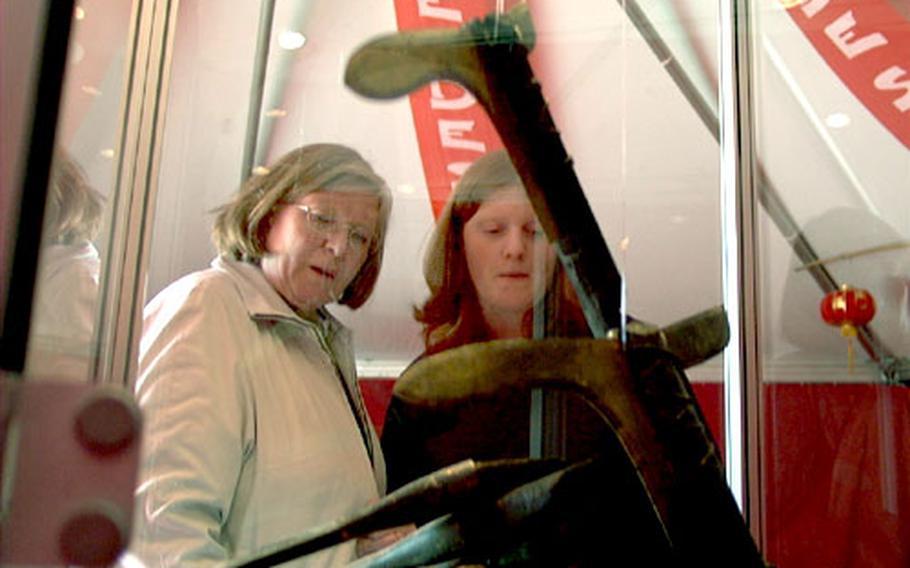 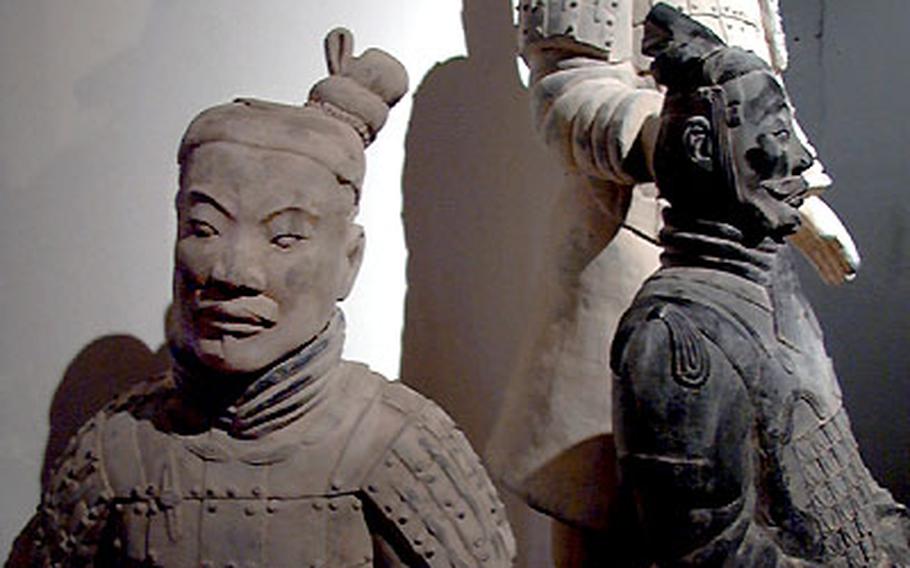 Want a life-sized replica of China’s famous terra cotta warriors? At the exhibit gift shop, you can buy one. Be prepared to pay up to $3,000. (Rick Scavetta / S&S)

About 130 replicas of the ancient troops are currently on display at the Europaplatz near Luisenplatz in Mannheim, Germany. The exhibit is a project funded by Ralph Grueneberger, a businessman from Erfurt, Germany

In 1974, three farmers digging a well south of the village of Xiyang unearthed what they called a &#8220;pottery man,&#8221; made of a hard clay often used for earthenware and sculptures. Two years later, archaeologists had uncovered 8,000 terra cotta warriors and horses that were built to protect Qin Shi Huang&#8217;s tomb. Since its discovery, the Terra cotta Army has been dubbed the eighth wonder of the world.

From the entrance, the Mannheim exhibit at first looks a little dry. A few elderly Germans peered into a couple of glass cases holding tools of ancient warfare &#8212; axes and arrowheads made from bronze. Beside each case, and throughout the exhibit, descriptions are written in both English and German.

But there is more. And it&#8217;s well worth the history lesson involved in the first couple of rooms.

Visitors first get a chance to bone up on Chinese history &#8212; which most Americans probably didn&#8217;t get in high school &#8212; by reading panels of text about Qin Shi Huang. They are helpful for appreciating the display.

Qin Shi Huang, who lived from 259 to 210 B.C., is widely regarded as the first emperor of China after unifying seven warring states. Grueneberger finds that fact significant.

However, the display is intended not to glorify Qin Shi Huang&#8217;s warriors, but rather to give a closer look at the emperor and the people of his time. Grueneberger said his interest is about human history and how Chinese culture thrived more than 250 years before Christ, he said.

For the exhibit, Grueneberger traveled to China and approached the director of Shaanxi University to construct replicas by an ancient procedure. Work began in 2000 and took more than a year, he said.

Each of the 130 life-size replicas &#8212; about the size of a normal person &#8212; receives the same treatment as the statues built in the past. Every one was modeled by hand to match original details.

Once master craftsmen carve a clay figure, the statue must be set aside for at least four weeks to dry. Then it is fired in a charcoal kiln at temperatures up to 1,250 degrees Celsius.

Just as each U.S. soldier wears the same uniform but is an individual inside, the same idea held true 2,200 years ago for the artists who crafted individual characteristics in the terra cotta army.

Once you realize the head of each statue is unique, it is impossible not to compare one with another in an exercise that becomes almost a game.

Once a viewer stands among the silent lines of soldiers and focuses on them, it&#8217;s easy to drift back in time to ancient China. Chinese stringed instruments whine somber melodies that echo throughout the white festival tents that house the exhibit to complete the effect.

The exhibit opened last August in Frankfurt and was also on display in Munich. In the past seven months, more than 300,000 people have visited, Grueneberger said. Many Americans passed through in Frankfurt, including soldiers from the American Forces Network, he said.

The clay soldiers will be on display in Mannheim until May 11. After that, the show moves to Bonn, Hamburg and Berlin.

The Mannheim exhibit is open daily from 10 a.m. to 7 p.m. Admission, which includes a visit to Luisenpark the same day, is 11 euros for adults and 7 for children 6-17. There are also discounts for groups of 20 or more, school classes and families.

More information, in German, can be found at: http://www.terracottaarmee.de/.