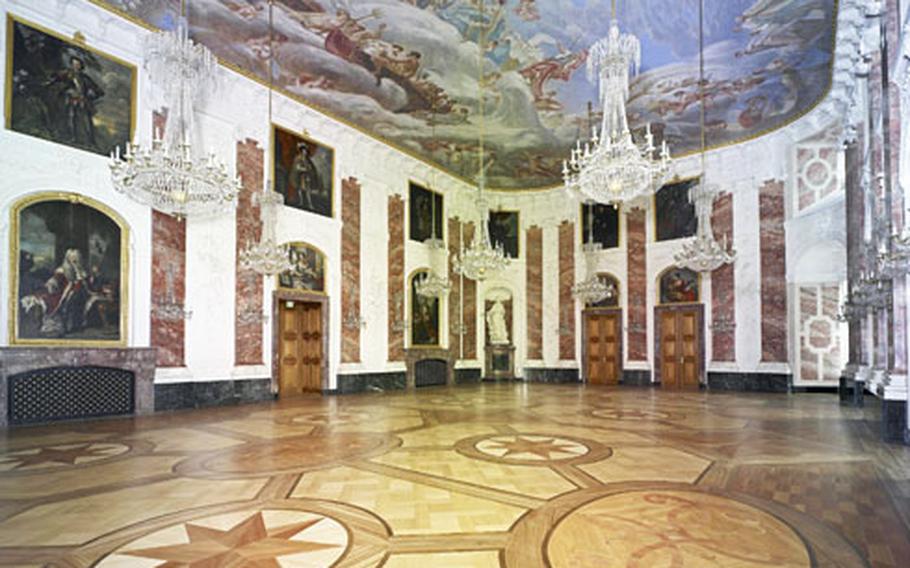 The Rittersaal, or Knights Hall, is the centerpiece of Mannheim palace’s main building. (Photos by Michael Abrams/S&S)

The Rittersaal, or Knights Hall, is the centerpiece of Mannheim palace’s main building. (Photos by Michael Abrams/S&S) 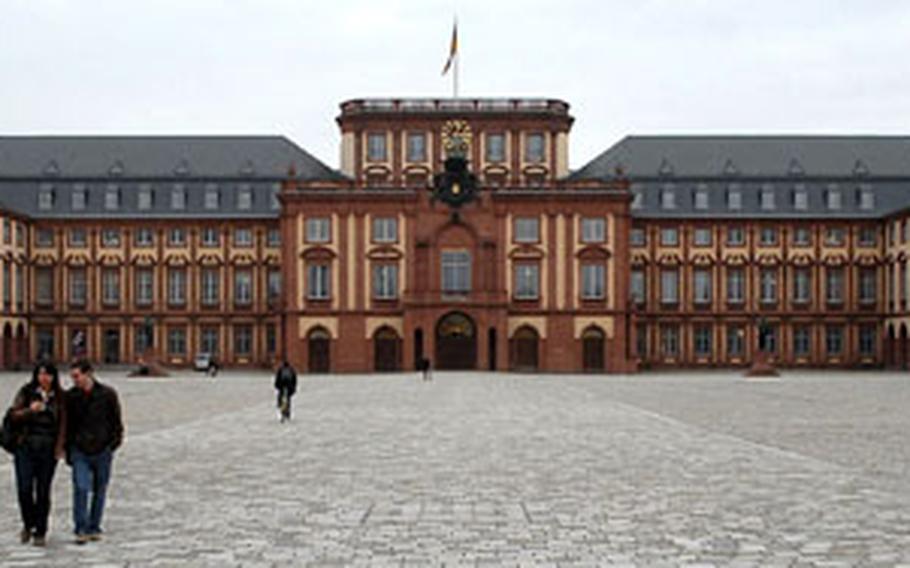 Mannheim palace was built in the early 18th century under Elector Carl Philipp. It is one of the largest baroque palaces in the area. () 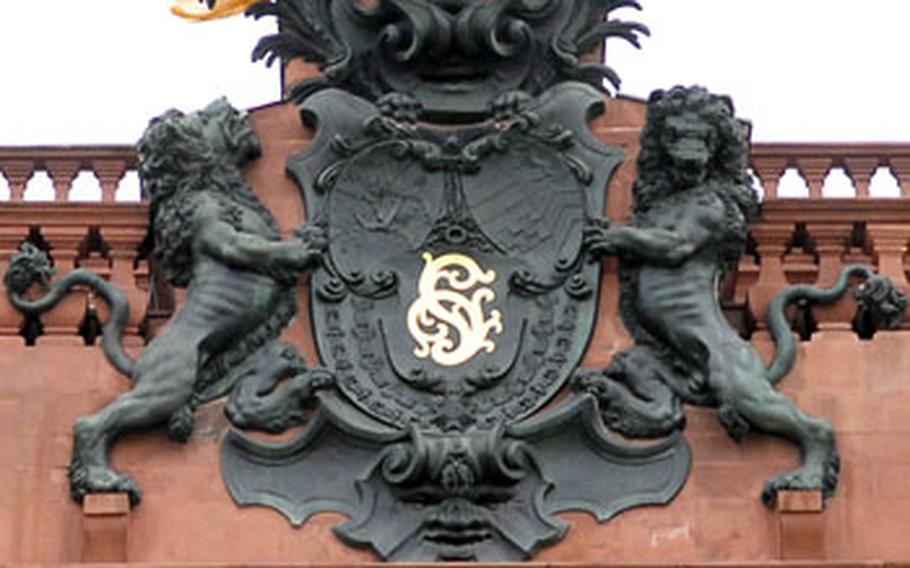 The flag of Germany’s Baden-Württemberg flies outside above the royal coat of arms on the main building. ()

It may come as a surprise that there is a great baroque palace to visit in Mannheim, Germany.

Despite being almost 290 years old, the former staterooms of the electors of the Palatinate and the dukes of Baden were only recently opened for tours.

Like many palaces and castles in Germany, the palace in Mannheim has seen its fortunes rise and fall with the flow of history.

Elector Friedrich IV built a fortress, the Friedrichsburg, here in the early 17th century. It was destroyed &mdash; along with much of the town &mdash; in the Thirty Years&rsquo; War. Elector Karl Wilhelm I rebuilt the town and constructed a simple palace &mdash; but in the next war to hit Mannheim, the War of the Palatine Succession, the palace and town were again heavily damaged.

It was not until 1720, when Elector Carl Philipp moved his court from Heidelberg to Mannheim, that today&rsquo;s great baroque palace was built. Under his successor, Carl Theodor and his wife, Elisabeth Augusta, the palace and court flourished. Its heyday lasted until 1778 when Carl Theodor moved his court to Munich.

War and new ownership brought more changes to the palace, which, along with Mannheim, fell to the house of Baden. Grand Duke Carl of Baden and wife Stephanie, Napoleon&rsquo;s adopted daughter, moved into the palace, which she renovated in the Empire style. It experienced a second heyday under Stephanie, until her death in 1860. In 1919, the palace passed to the state of Baden.

The palace was heavily damaged in World War II. Among the things lost was its fabulous three-story library, which held more than 100,000 books. Rebuilt after the war, the palace housed city and state offices and a college. Today, it is home to Mannheim University.

In 2002, extensive renovations to the central building and the second-floor staterooms began. In 2007, in honor of the 400th anniversary of Mannheim receiving city rights, the building was opened to the public.

A visit takes you up a grand staircase to the nine rooms that make up the royal apartments and back down a tight, spiral servants staircase to the ground-floor museum. With the provided audio guide, you will learn as much as you want about the palace.

Its centerpiece is the Rittersaal, the Knights Hall, an ornate room decorated with the portraits and statues of the electors.

Doors on each side of the room lead to the duke&rsquo;s apartment and to those of the duchess, respectively.

Note the richly set dinner table in one room, and the "Mannheim Knochen," an inlaid, bone-shaped table that was a gift to the duke from the city, in another.

The palace museum is small, but has lovely collections of porcelain, tapestries and jewelry, including Stephanie&rsquo;s diadem made of pearls, diamonds and gold.

The Barockschloss Mannheim is on Bismarkstrasse, on the edge of the city center. From Autobahn 656, head to the center, then to the Hauptbahnhof (train station). At the last intersection before the station, take a right on Bismarkstrasse. From the west, exit A61 at Kreuz Ludwigshafen onto A650. This will turn into highway B37, going through Ludwigshafen to Mannheim. After you cross the Rhine, the palace will be in front of you. By public transportation take tram No. 1, 3 or 5 from the main train station, and get off at "Schloss."

There is no food at the palace, but downtown Mannheim is right across the street, where there are plenty of possibilities in all price classes.

The palace Web site is www.schloss-mannheim.de, and there is an English-language link. The public cannot take photos inside the palace.