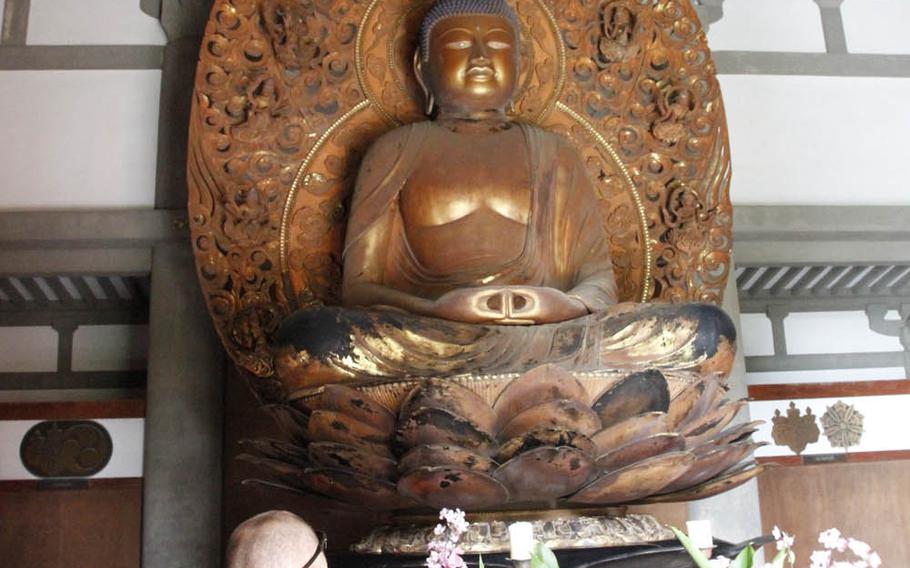 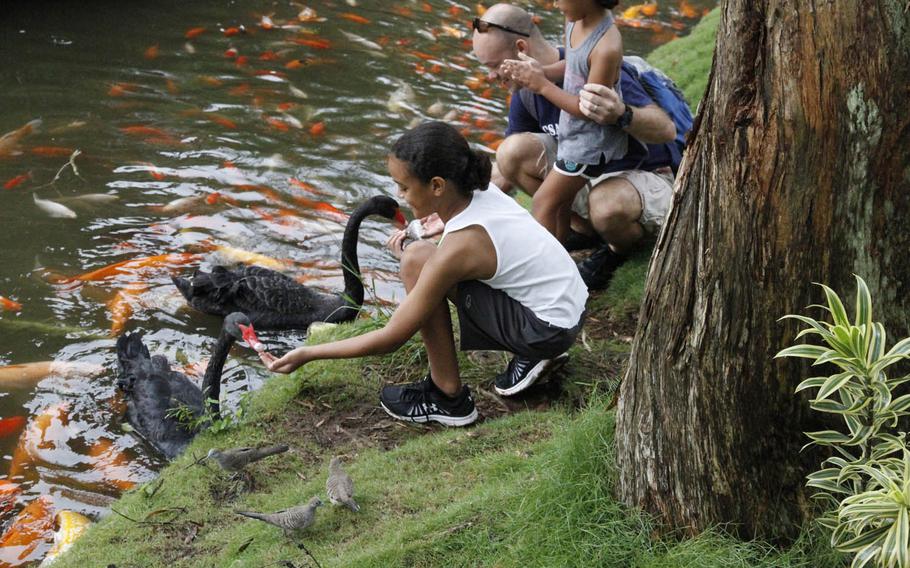 Buy Photo
Black swans and koi fish look for treats at the pond near Byodo-in Temple in Oahu, Hawaii. (Wyatt Olson/Stars and Stripes) 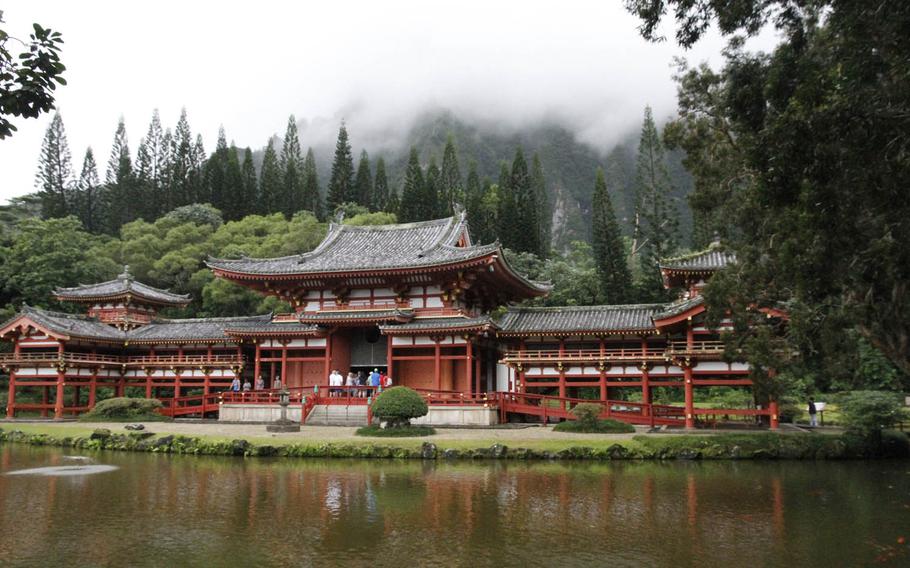 Buy Photo
Byodo-in Temple on the windward side of Oahu, Hawaii, is a replica of a 1,000-year-old temple in Uji, Japan. (Wyatt Olson/Stars and Stripes) 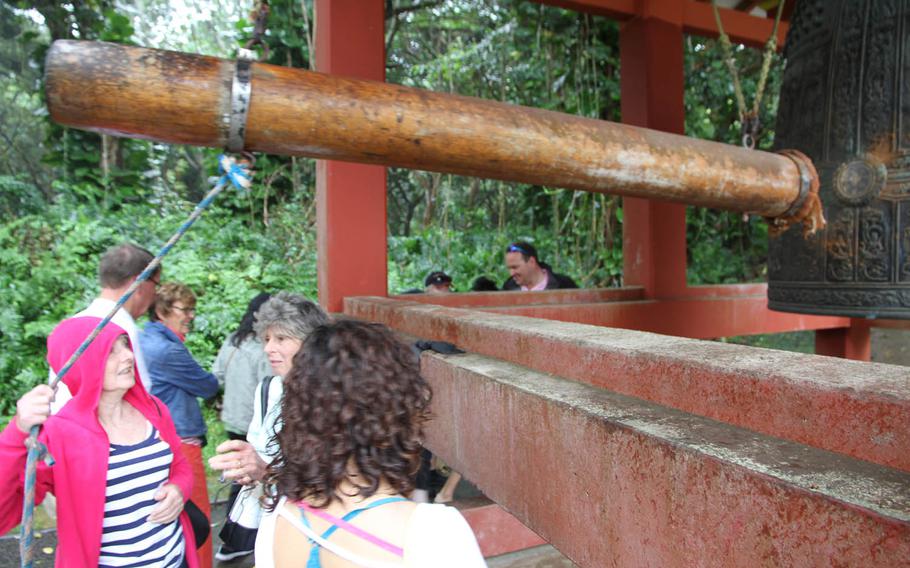 Buy Photo
A woman pulls on a rope to gong the massive brass bell at Byodo-in Temple in Oahu, Hawaii. (Wyatt Olson/Stars and Stripes) Buy Photo
A steaming plate of garlic shrimp from Famous Kahuku Shrimp Truck, one of the many rustic eateries on the North Shore of Oahu specializing in locally grown shrimp. (Wyatt Olson/Stars and Stripes) 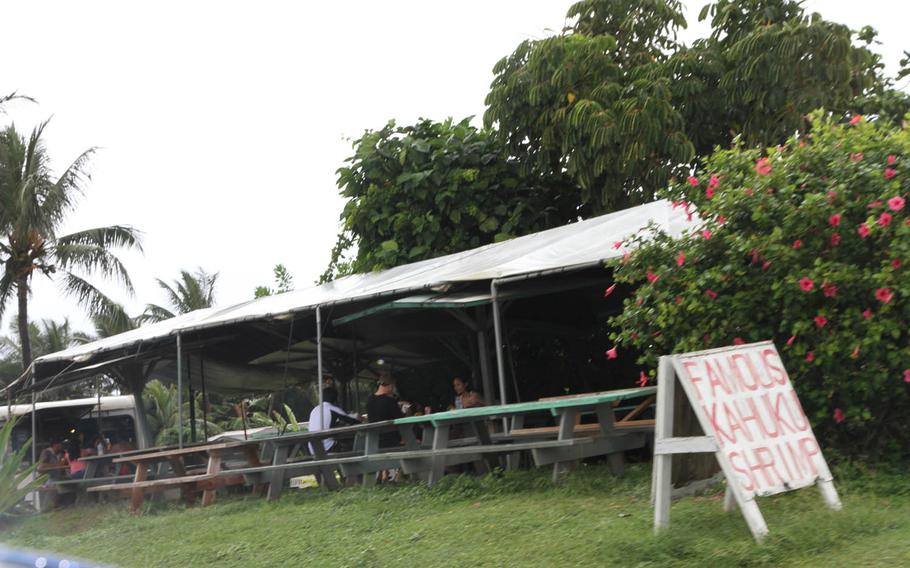 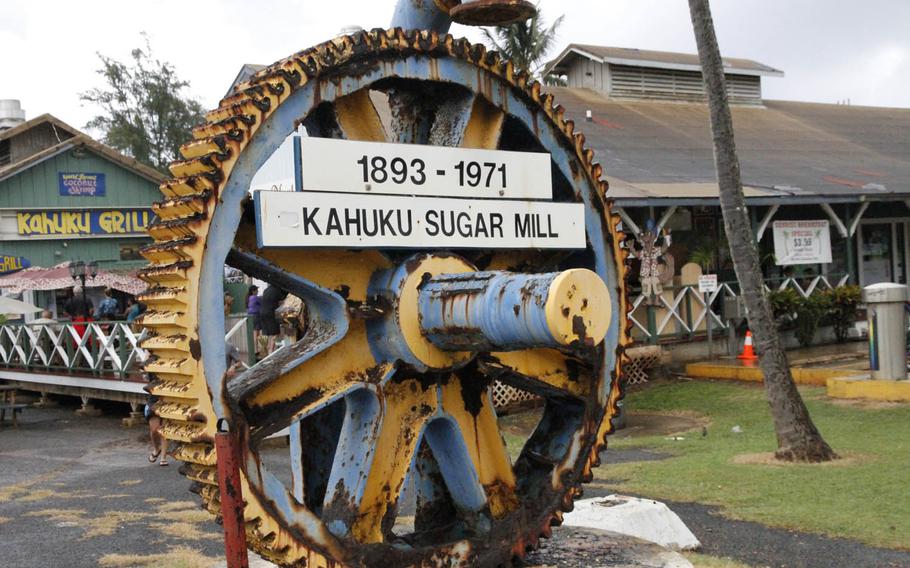 Buy Photo
This masive steel gear from the defunct Kahuku Sugar Mill is a relic from a bygone era of Oahu's North Shore, whose primary industry now is tourism. (Wyatt Olson/Stars and Stripes) 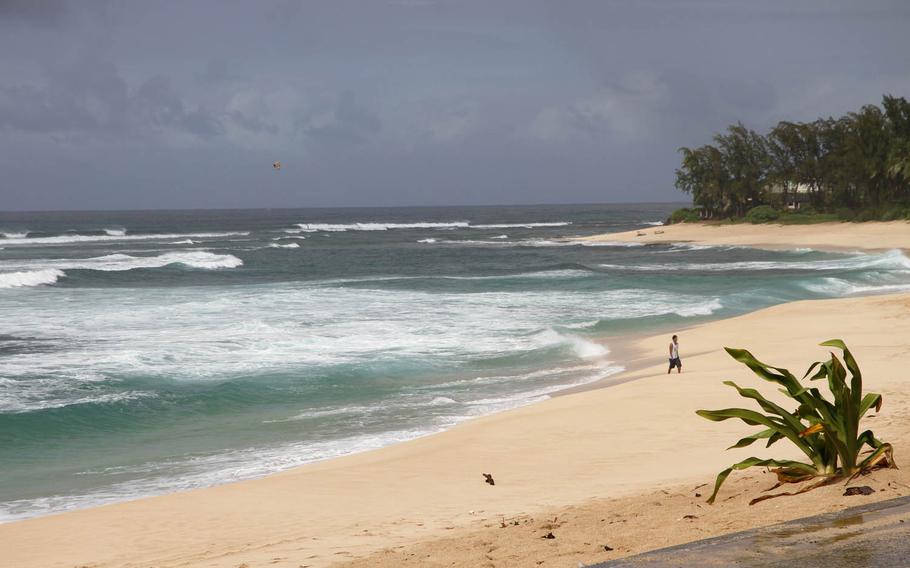 Buy Photo
The North Shore is a beachcomber's dream with its miles of sand. (Wyatt Olson/Stars and Stripes)

If there’s a contest for stunning scenery per mile driven, then a round-trip from downtown Honolulu around the North Shore of Oahu is the grand circle. Time it right, and you can lunch on locally raised shrimp, watch surfers tackle one of the world’s most famous waves and be back in the city in time for dinner.

A number of tour buses offer this circle as a day trip, but driving your own vehicle provides the freedom to linger at leisure and wander off the beaten track. Most of the route is on the main coastal road, so no map is needed.

Head out of Honolulu via Likelike Highway by mid-morning to reach the windward side of the island, a 20-minute ride that gets the blood pumping. You’ll know you’re on your way when the mist hits the windshield while driving up the cloud-peaked Ko’olau mountains. Past the mountaintop tunnels lies the greener side of Oahu — think Jurassic Park.

On the descent, the Likelike morphs from freeway into a four-lane road, then a two lane. You’ll quickly forget the hubbub of the city.

Utter tranquility awaits at the Byodo-In Temple at the foot of the Ko’olau mountains in a vast cemetery called the Valley of the Temples Memorial Park. The temple is a replica of the nearly 1,000-year-old Byodo-in Temple in Uji, Japan. It was built in 1968 to commemorate the 100th anniversary of the first Japanese immigrants to Hawaii.

This is a “non-practicing” Buddhist temple because monks do not live here. There is a shrine room with a figure of Buddha, however, where guests are asked to remove their shoes before entering.

A seven-ton brass bell hangs outside the temple, and visitors can gong it by swinging a large wooden pole hanging on ropes.

A large reflecting pond stands in front of the temple. Hundreds of multicolored koi move through the waters, and small bags of fish food are for sale. Two black swans lord above the fish, routinely stealing their food.

A sign warns of peacocks on the premises, but I’ve yet to see one after a handful of visits here.

Leaving the temple, you begin the lovely drive to the North Shore. And it can be long, particularly if it’s a weekend during high tourist season. That’s fine, though, because to the left are steep mountain escarpments and to the right is an ocean that’s 50 shades of blue.

Numerous beach parks line the route, so stop and stretch your legs and wade in up to your knees.

By the time you reach the town of Kahuku on the northeast peak, it’ll be around noon. Good timing: you’ve just entered the land of garlic-shrimp trucks. Over the past 20 years, the North Shore — Kahuku in particular — has become famed for locally farmed shrimp and the plethora of trucks doling out paper plates full of them. Aficionados claim they are sweeter than shrimp raised or caught elsewhere. With all the garlic they’re bathed in, it’s hard for me to tell, but I do know the North Shore shrimp are about the freshest I’ve ever had.

You can’t cast a fishing line in Kahuku without hitting a shrimp truck, but for price and quality try Famous Kahuku Shrimp Truck. It’s about as basic as it gets, with a tarp covering about 10 picnic tables. Aside from garlic shrimp, it offers coconut, spicy, fried, panko-breaded and steamed shrimp as well as squid. Each heaping pile of shrimp is served atop a layer of shredded raw cabbage, which is blanched by the searing garlic butter dripping down. Each plate comes with a side of rice and macaroni salad — Hawaiian staples — and cost $12 to $14. If you’re not a big eater, consider sharing a plate.

About 20 minutes up on Highway 83 is Ehukai Beach Park, and it’s from here that you can see the famed Banzai Pipeline, the bane and glory of the world’s top surfers.

A reef formation causes the waves to break in such a way that they create a high, thick curl of water.

Local lore holds that Banzai Pipeline was named in 1961 by a movie producer, Bruce Brown, who visited the area with two surfers. They stopped at Banzai Beach to film one of the surfers, who, after noticing a pipeline construction project nearby, suggested the wave be christened “Pipeline.”

The name was used in Brown’s film “Surfing Hollow Days,” but it was the instrumental hit recording “Pipeline” in 1963 by The Chantays that thrust it into the slang of the day.

Now begins the drive back, which takes about an hour if you’re all business. But if you want to do a little shopping or have sip of coffee or something stronger, detour off the main road to the quaint shops at historic Haleiwa Town. Or, a few miles down the line is Dole Plantation, where you can pop in for an ice cream treat.

Oahu's Grand CircleGetting there Take Interstate H-1 West from Honolulu, exit onto Likelike Highway. Once over the mountain, on the windward side of the island, take Highway 83 north. As you turn inland after leaving Haleiwa on the North Shore, 83 turns into Highway 99, which eventually turns into Interstate H-2. Exit onto H-1 East, which takes you back to downtown Honolulu.

Byodo-In Temple Location: 47-200 Kahekili Highway, Kaneohe, Hawaii. Driving north on Likelike Highway, turn left onto Avenue of the Temples, which is the main entrance to the Valley of the Temples Memorial Park, a huge cemetery. Follow the signs for the Byodo-In, which is at the far end of the cemetery nearest the mountains. Hours: 9 a.m.-5 p.m. daily. Admission: $3 adults, $2 seniors, $1 children, cash only. Information: (808) 239-8811; www.byodo-in.com