Mainz: A museum half full 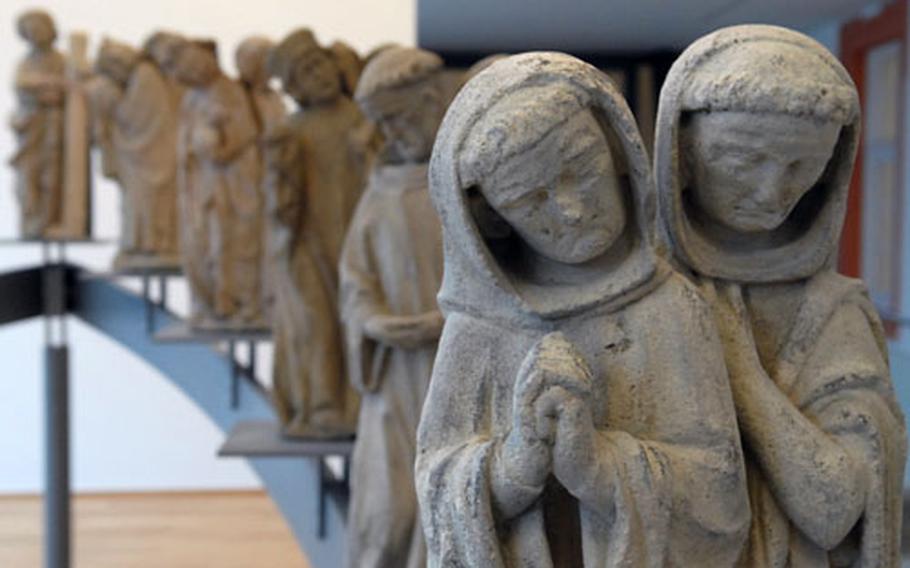 Statues that once framed the 14th-century portal of the Liebfrauen church in Mainz, Germany, are on display in the Landesmuseum-Mainz. The church was torn down in 1806. (Michael Abrams / S&S)

Statues that once framed the 14th-century portal of the Liebfrauen church in Mainz, Germany, are on display in the Landesmuseum-Mainz. The church was torn down in 1806. (Michael Abrams / S&S) 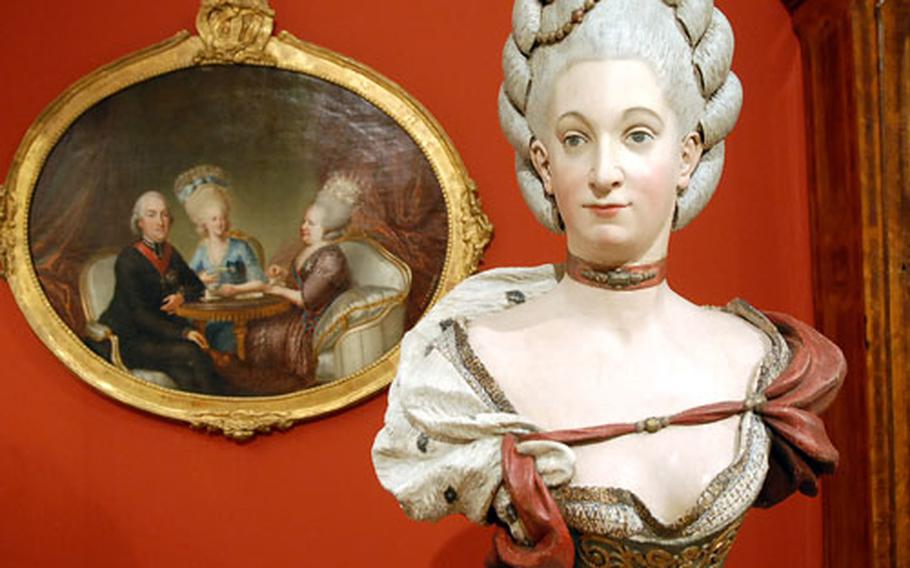 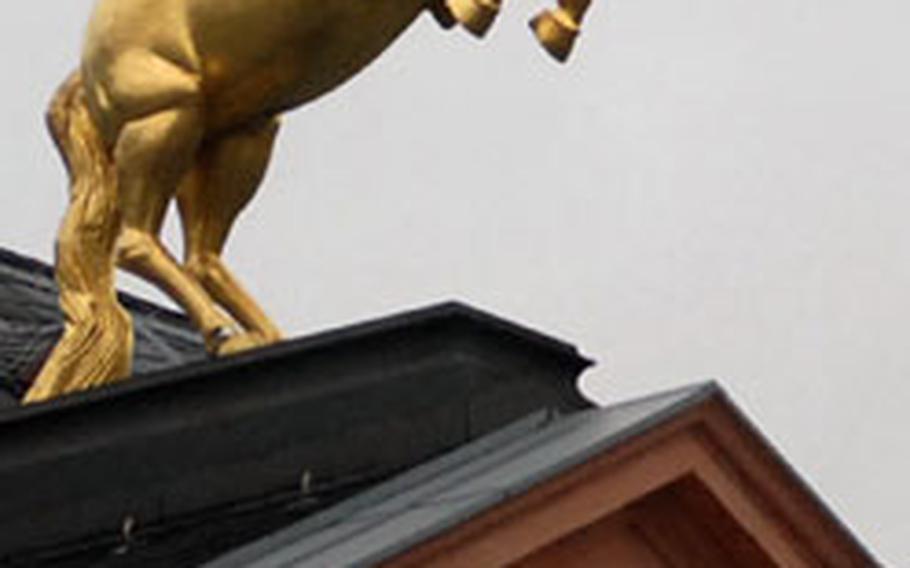 A golden steed tops the Landesmuseum-Mainz. The museum is housed in what formerly were royal stables. (Michael Abrams / S&S) 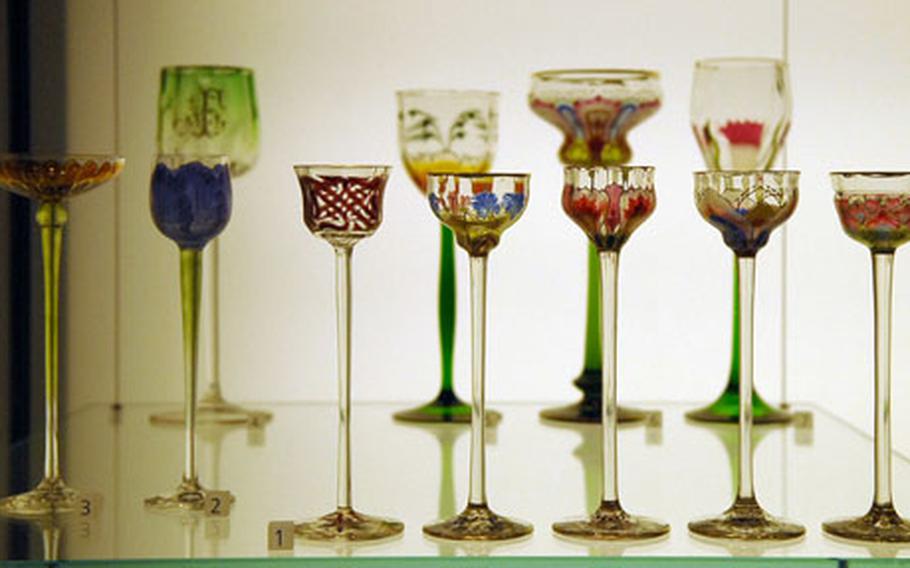 The bad news about the Landesmuseum-Mainz, the state museum of Rheinland-Pfalz, is that, due to construction, nearly half of its sections are closed.

The good thing is, that leaves more time to spend in the half that is open without getting cultural overload.

One of the oldest museums in Germany, the Landesmuseum- Mainz is housed in a complex that once served as royal stables in downtown Mainz. A statue of a golden steed tops the mid- 18th-century building, making it easy to recognize.

Focusing on applied arts, painting and sculpture, the museum has 14 sections that take visitors from prehistoric times to the present. Among sections closed until early 2010 are those on prehistoric, Roman, early medieval and 20th-century eras and a collection of Jewish items.

The sections that are open stretch over three floors. Because of recent renovations, some elements have been combined and are presented, more or less, in chronological order. At the moment, visitors can explore the late Middle Ages, the Renaissance, Dutch painting, Mainz baroque, the ages of Goethe and the Biedermeier movement, art around 1900 and art nouveau.

The ground floor has temporary exhibits, but a walk up the stairs to the second floor takes you back to medieval Mainz.

The central foyer, which connects the exhibition rooms, is filled with mementos of the city&rsquo;s past. A row of relief panels, taken from a medieval &ldquo;department store&rdquo; demolished in the 19th century, lines one side. Some of the statues that once framed the portal of the 14th-century Liebfrauen church, torn down in 1806, are at one end of the room.

The highlight of the Renaissance section is the two-panel painting of Adam and Eve that was probably painted by Baldung Grein but is a copy of a work by Albrecht D&uuml;rer. The originals can be seen in the Prado in Madrid, Spain. Another highlight is the &ldquo;Bretzenheimer Madonna,&rdquo; a statue carved around 1480.

None of the masters, such as Rembrandt or Jan Vermeer, are in the Dutch painting collection, but it still has a fine selection of 17th-century art from the Netherlands.

The other two rooms on this floor are dedicated to Mainz baroque of the 17th and 18th centuries, and the times of Goethe and the Biedermeier period, roughly late 18th to late 19th centuries.

While there are many paintings here, there are also a lot of sculptures, furniture and porcelain figurines. Most of these come from a factory in nearby H&ouml;chst, now a suburb of Frankfurt. Also worth noting is the strikingly lifelike bust of a woman, done by an unknown artist in 1770.

Art from around 1900 is presented in one room of the top floor. Here you can trace the end of the classical painting tradition and what was next on the horizon &mdash; realism, symbolism and art nouveau.

While the art nouveau collection has furniture and art, the highlight is the glass collection. The stars of this exhibit are Frenchman &Eacute;milie Gall&eacute; and American Louis C. Tiffany. Beautiful glasses, vases, plates and bowls are on display, as is a famous Tiffany lamp.

The museum&rsquo;s individual exhibits are labeled in German only; however each period is explained in English. For those who want more detail, audioguides with the museum&rsquo;s highlights can be rented at the cashier&rsquo;s desk.

On the QT:Directions: The Landesmuseum-Mainz is at Grosse Bleiche 49-51 in downtown Mainz, near the Landtag &mdash; parliament &mdash; building. Look for the golden horse on the roof. Parking garages are nearby. The museum is about a 15-minute walk from the Mainz main train station.

Costs: Admission is 3 euros for adults, 2 euros for children, free for younger than 6; a family ticket costs 6 euros. An audioguide is 1 euro. Parking in downtown Mainz is not cheap: 80 euro cents for the first half-hour, 90 euro cents for the second and 1 euro for every 30 minutes after that.

Food: There is a cafe in the museum, and there are plenty of restaurants and cafes in all price ranges within walking distance.