Magic and flame-twirling meld at Honolulu's Magic of Polynesia 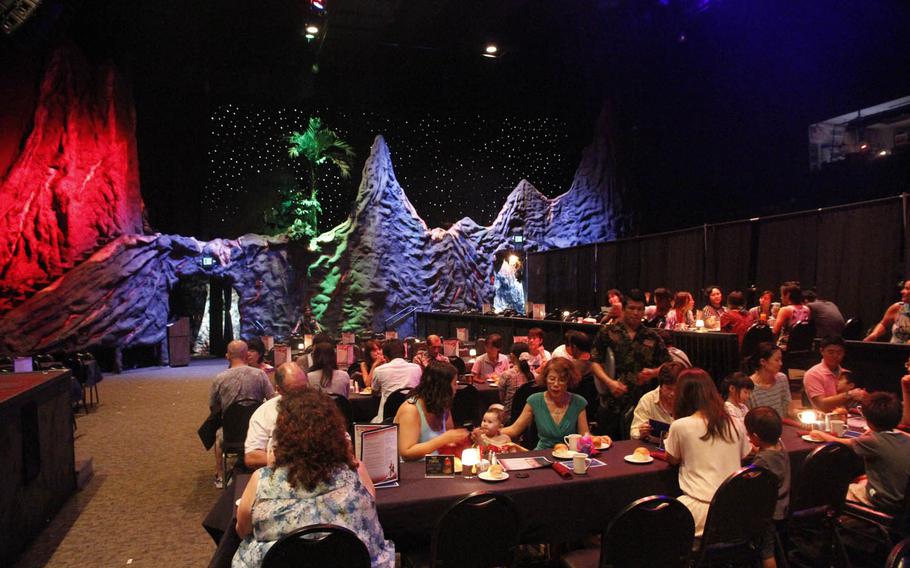 Guests eat dinner before a recent Sunday-night show at Magic of Polynesia on Waikiki Beach in Honolulu. (Wyatt Olson/Stars and Stripes)

Guests eat dinner before a recent Sunday-night show at Magic of Polynesia on Waikiki Beach in Honolulu. (Wyatt Olson/Stars and Stripes) 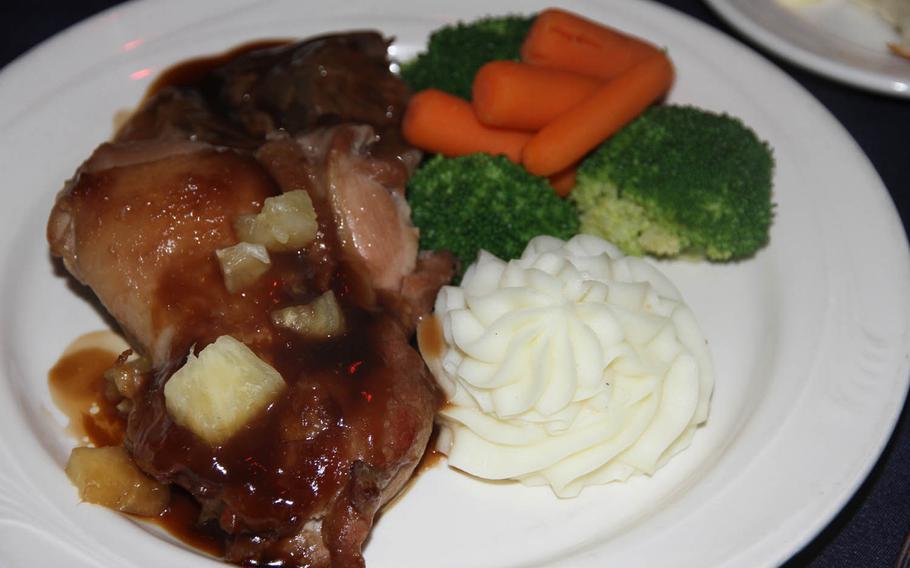 A standard dinner offered at Magic of Polynesia in Honolulu that consists of teriyaki chicken, boneless beef ribs, vegetables and mashed potatoes. (Wyatt Olson/Stars and Stripes) Sparky the magician entertains guests during a lull between dinner and the main show at Magic of Polynesia in Honolulu. (Wyatt Olson/Stars and Stripes) Costumed dancers perform a routine as part of the Magic of Polynesia show in Honolulu. (Wyatt Olson/Stars and Stripes) 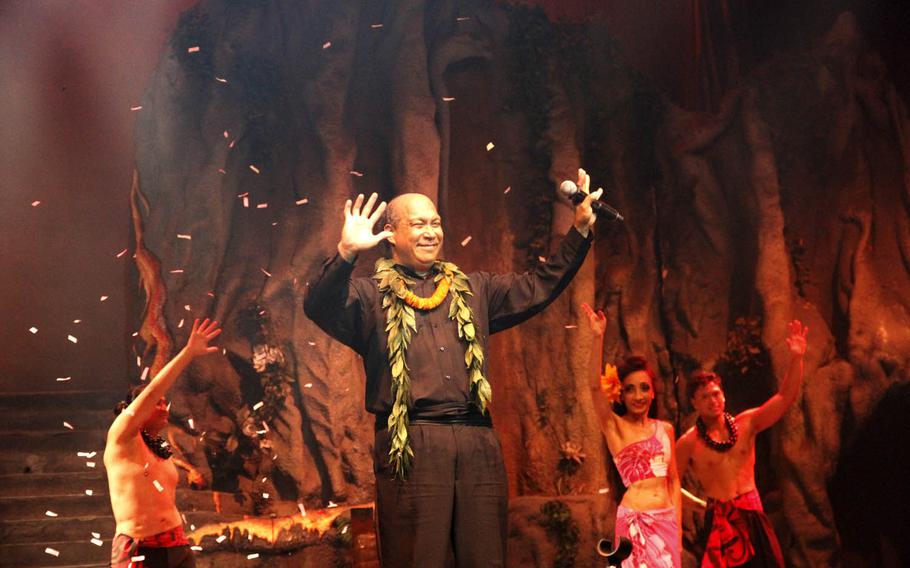 Magician Michael Villoria waves to the audience after completing a confetti-spewing illusion toward the end of the Magic of Polynesia show in Honolulu. (Wyatt Olson/Stars and Stripes)

The melding of magic and traditional Polynesian flame-twirling might seem peculiar. Until, that is, you’re watching some guy spinning a flaming baton as fast as a roulette wheel and muttering to yourself, “How does he do that?”

That same question arises during any good illusionist show, and Magic of Polynesia in Honolulu is definitely good — very good.

It’s a pity the same can’t be said for the basic dinner, a pedestrian plate of food carrying the highly inflated price of $38 over the basic show price. The dish of teriyaki chicken, boneless beef ribs, broccoli and mashed potatoes possessed all the hallmarks of the institutional food you’ll find at a military base mess hall or nursing home. (Since our visit, the basic dinner was changed to include a jumbo shrimp, according to the show’s web page.)

You might fare better with the deluxe meal/show package, which is $76 over the basic show price and offers “preferred” seating. That meal includes a lettuce salad with brie, hearts of palm and beets, charbroiled filet mignon and half a lobster. No one in our small group had that, nor were we seated close enough to those who did to overhear any oohs and aahs of satisfaction.

My advice is, go for the magic show alone, which ends around 7:30 and leaves you plenty of time to find dinner somewhere else on Waikiki.

You won’t find a magic show like this anywhere else on Oahu, or in Hawaii, for that matter.

Magic of Polynesia takes place in a cavernous space in the Waikiki Beach Holiday Inn. Much of the wall space has been made over with faux rocky peaks and cliffs to give it a volcanic island feel — but made eerie with colored lights. The stage is immense, as it would need to be to fit things like helicopters and Lamborghinis into the act.

During the short time between dinner and the show’s start, several magicians walked among the tables, wowing diners with small-scale tricks.

A magician who introduced himself as Sparky stopped at my table. I told him card tricks are my favorite, and he quickly whipped out a deck and performed the “card warp” trick, in which one card appeared to reverse sides. He also showed me how the trick was done, and it’s a credit to his showmanship that even though he revealed the secret, I still couldn’t see how it was done.

Magic of Polynesia was created by John Hirokawa, who usually headlines the act, but has two other magicians substitute on his nights off. On the Sunday I attended, the top slot was filled by Michael Villoria, a deeply tanned man with a Cheshire Cat smile.

Interspersed throughout the act were performances by Polynesian dancers and flame twirlers. The primary twirler, a mountain of a man, doubled as a dancer with the troupe, whose series of costume changes seemed magical in itself.

I started to take photos when the show began, but was quickly told that photography and video were not allowed.

Villoria hit the stage and wasted no time in pulling out the big guns, making a full-size helicopter appear before the audience. Here would be the opportune time to admit that I have no answer to my repeated question, “How did he do that?”

The only thing I know for sure from the roughly 90-minute show was that the flurry of snowflakes that fell over the entire auditorium in his finale wasn’t snow. It was some kind of white foam that looked stunningly like snow.

And when the lights were turned up, the “snow” was gone, as was Villoria.

Directions: The show is in the Holiday Inn Waikiki Beachcomber Resort, which is on Kalakaua Avenue, the nearest street running parallel to the beach. Check in for the show at the hotel’s second-floor lobby.