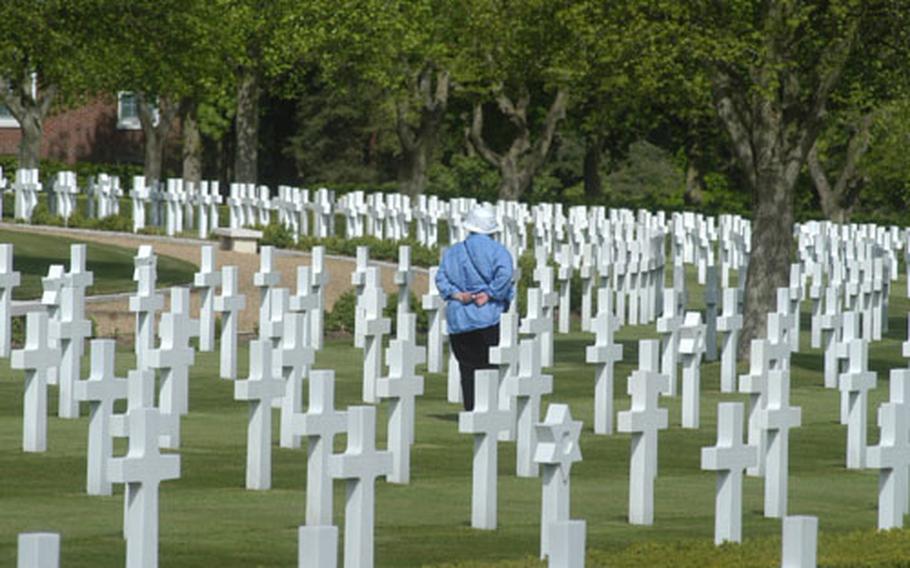 A visitor walks among the grave markers at Cambridge American Cemetery in England. More than 3,800 American war dead from World War II are buried at the cemetery near Cambridge, England. (Ron Jensen / S&S)

MADINGLEY, England &mdash; First-time visitors to the Cambridge American Cemetery are immediately impressed with the beauty of the place.

And why shouldn&rsquo;t they be? The white marble headstones virtually glow against the green grass, which looks like it has been cut earlier in the day because it probably was. The hedges are trimmed as level as snooker tables.

And except for the deepest months of winter, something is usually in bloom.

But it represents the ugliest creation of mankind: War.

The 3,812 headstones mark the graves of America&rsquo;s dead from World War II &mdash; soldiers, sailors and airmen who bid farewell to loved ones and never returned.

The Portland stone wall, too, tells the sad story of war. It contains 5,126 names of those who were killed, but whose bodies were never recovered. Some names are marked by a small rosette, indicating their remains were subsequently recovered.

Joseph P. Kennedy Jr. was the man who would be president. But the Navy pilot and older brother of John F. Kennedy, who did become president, died when his airplane exploded on Aug. 12, 1944.

The name of Alton G. Miller will be unfamiliar to many. He was better known as Glenn Miller. The bandleader was on his way to Paris on Dec. 14, 1944, when his airplane disappeared over the English Channel.

Notice, too, one name on the wall is inscribed in gold letters. It belongs to Lt. Col. Leon R. Vance Jr. The gold letters indicate he was awarded the Medal of Honor. The man whose name graces an Air Force base in Enid, Okla., disappeared over the North Atlantic while aboard a medical evacuation flight for the States, wounded in the war that garnered him the nation&rsquo;s highest military honor.

History is also found inside and outside the chapel. A large map inside tells the story of the entire theater of war from 1941 until 1945. And the west exterior wall of the chapel is covered with a map showing many of the airfields in Great Britain used by the United States during the war.

It is best to wander slowly the 30 acres here, stopping to gaze at the crosses and the Stars of David, reading the names and pondering the ramifications of their fate.

If the day is clear, the great cathedral in Ely, 14 miles to the north, is visible from near the flagpole. That is a good spot, also, to take in the rigid military formation of the headstones, spread across the grass in a fan shape.

Standing there on a sunny day with puffy clouds overhead and the songs of birds rising from the surrounding trees, there is no other conclusion to draw except for the obvious:

This is a beautiful place, no matter how ugly it might be.

Directions: Cambridge American Cemetery is two miles west of Cambridge, England, on A-1303, near the villages of Madingley and Coton. Signposts mark the way from A-14. It is about a 35-minute drive from RAF Lakenheath and RAF Mildenhall.

Costs: There is no admission charge and parking is free.

Times: The cemetery is open daily from 9 a.m. to 5 p.m. year round. Ceremonies are held on Memorial Day and Veterans Day.