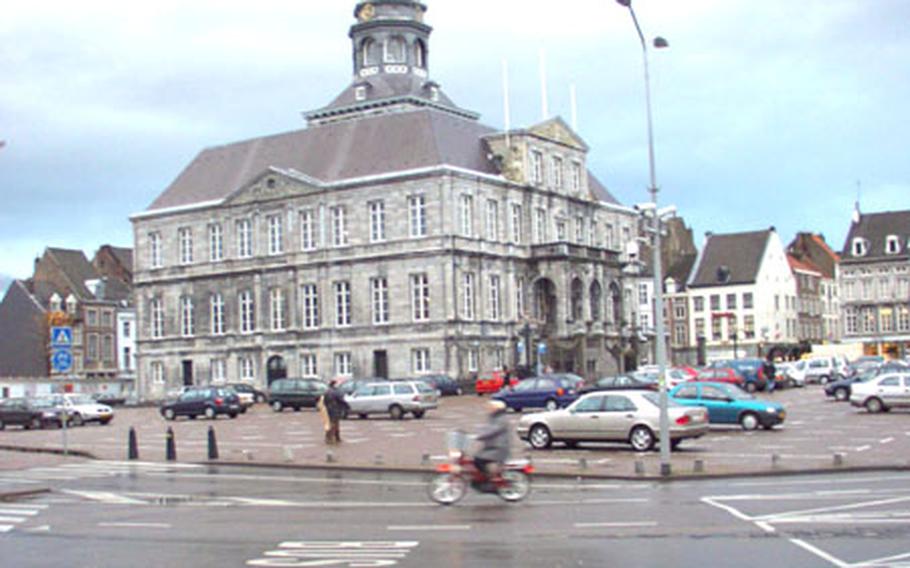 A Maastricht focal point is the 17th century Stadhuis, or town hall, the dominant feature of Markt Square. On Wednesdays and Fridays, vegetable vendors flock to the plaza to sell their produce to residents of the provincial capital. (Kevin Dougherty / S&S)

A Maastricht focal point is the 17th century Stadhuis, or town hall, the dominant feature of Markt Square. On Wednesdays and Fridays, vegetable vendors flock to the plaza to sell their produce to residents of the provincial capital. (Kevin Dougherty / S&S) 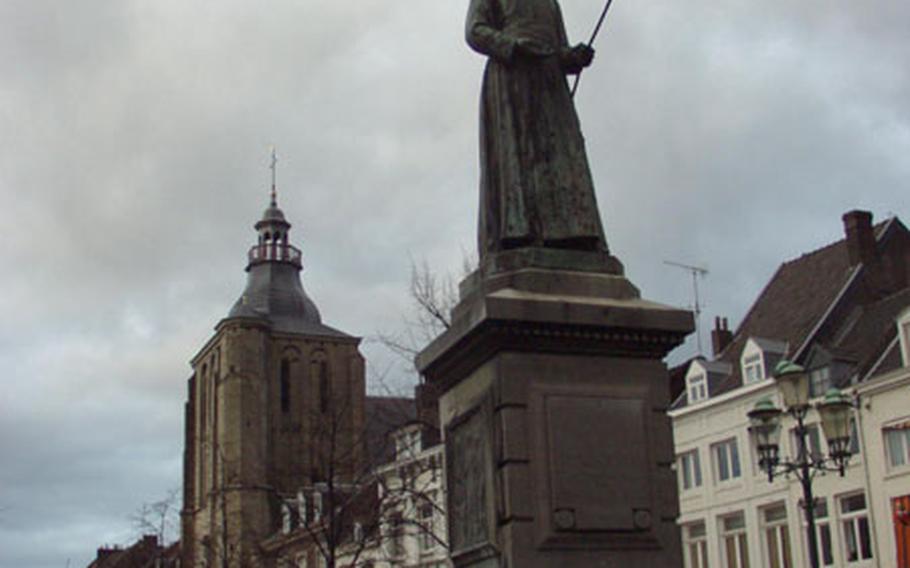 Adjacent to Markt Square in Maastricht&#39;s city center is a statue of Jan Pieter Minckelers, a professor of physics in the late 18th century. Accentuated by an eternal flame, the statue honors Minckelers for creating a gas produced from the distillation of fossil coal. (Kevin Dougherty / S&S)

A visit to this city near the junction of the Netherlands, Belgium and Germany is a matter of timing - in the seasonal sense.

By definition, the "off-season" is a time when the normal pace of a place slackens, or goes into a suspended state, usually in concert with seasonal changes, like when summer slumbers. During such a stretch, "nice days" become the exception, not the rule.

That's especially so in this part of Europe, where the odds of a postcard-perfect day are low in the dead of winter. Better to pocket the shades and bring an umbrella.

And so it went on a mild, mid-January afternoon in Maastricht. As the sun slipped behind a bank of dark clouds, a tour of the city quickly turned into a watery affair. In Limburg, the southernmost province of the Netherlands, wet wintry days are the norm, though it doesn't seem to drag the locals down.

Maastricht "is a lovely town," resident Lucy Weysters said, as she prepared to unsheathe her umbrella for the wet walk home. "It's beautiful."

Located on the left bank of the River Meuse, Maastricht and its environs belie a common assumption that all of the Netherlands is as flat as a tabletop. This hilly region - bordered by Belgium in the south and west and Germany in the east - is an irregular swath of land featuring lush hillside forests, the Meuse Valley, fruit orchards, marlstone quarries and medieval settlements, the most prominent being Maastricht.

Founded by the Romans in 1 B.C., Maastricht is regarded by many as the Netherlands' oldest city. It has endured its share of sieges over the centuries, from the Spanish and Prussians to the French and Germans. Six miles to the east of the provincial capital, the Netherlands American Cemetery offers lasting sanctuary to more than 8,000 U.S. and Allied troops killed in World War II.

Today, the residents of Maastricht seem more interested in the present than the past. There are magnificent churches, such as St. Servaasbasiliek and Onze-Lieve- Vrouwkehas, and well-preserved medieval walls. But, the real anchor to the place is Vrijthof Square, with its narrow cobblestone streets and upscale boutiques.

The square and an adjoining section, Stokstraat Quarter, are the prime places for visitors to catch a quick glimpse of the city and its folk.

Maastricht "is where my heart is," said Pascal Smit, a young outdoor fish vendor, "and where it always will be."

The area is best traveled on foot. Park the car in Markt Square, dominated by the 17th-century town hall (Stadhuis), and walk south toward the storefronts and outdoor cafes of Vrijt- hof. The rest will unfold as you like, for Maastricht boasts some cool shops, fine restaurants and plenty of museums.

Smit likes the relaxed atmosphere of Maastricht. In Amsterdam, he says, people's lives revolve too much around business and possessions.

"The people here are warmer," Smit said as he looked out at the waves of locals heading home. "We live here to enjoy life, to love life."

And come rain or shine, they sure seem to.

Directions: From central Germany, head toward Aachen, on the German border about 25 miles east of Maastricht. East of Aachen is a junction that offers two options for Maastricht: Autobahn 44/E-40 (toward Li&egrave;ge) or Autobahn 4/A-(N)76 (toward Heerlen). Personnel from Schinnen should take the latter option when making the short drive to Maastricht. Both autobahns cross E-25, the highway that ultimately leads into the city. Look for the city center exit and follow the signs to the Wyck (pronounced "week") Markt, where there is parking adjacent to the Stadhuis, or town hall. On Wednesdays and Fridays, vegetable vendors occupy the market square, so parking may be an issue. Another parking area is a short distance away near Vrijthof Square.

Cost: It depends on what you do and where you go. Admission to the Bonnefantenmuseum, which houses historic and contemporary art, cost 7 euros (about $9), while the Museum of Natural History is roughly half the price. Other sites are free.

Times: Shops in Maastricht are open 1-6 p.m. Monday; for the rest of the workweek, regular hours are 9 a.m. to 6 p.m. Department stores and some shops stay open until 9 p.m. on Thursdays. Saturday shopping hours are 9 a.m. to 5 p.m. As a rule, banks are open from 9 a.m. to 4 p.m. daily and closed on Saturday and Sunday.

Food: City officials claim Maastricht has the best selection of restaurants in the region. But how do you know for sure? Every August, the city hosts the Preuvenemint Festival, a four-day gastronomic feast supported by more than 35 restaurants. The setting is Vrijt- hof Square, and music typically accompanies the feast. The 2004 festival is Aug. 26-29.

Info: Two Web sites worth noting: www.vvvmaastricht.nl for general tourism information, and www.preuvenemint.nl for the annual food festival. Check weather reports before going: Weather in the Benelux rapidly changes. It is best to pack an umbrella and sunglasses.