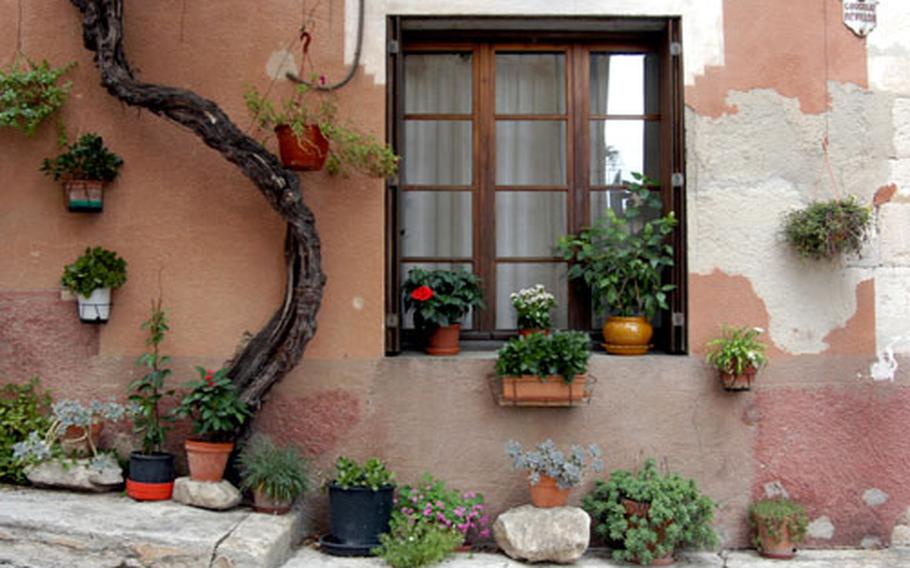 A house decorated with potted plants adds to the charms of St.-Saturin-les-Apt, one of the hilltop villages of the Luberon in France. (Michael Abrams / S&S)

A house decorated with potted plants adds to the charms of St.-Saturin-les-Apt, one of the hilltop villages of the Luberon in France. (Michael Abrams / S&S) Dry-stone huts, called bories, are a familiar sight in the Luberon. First built in the Iron Age, these at Village des Bories are between 200 and 500 years old. They were abandoned about 150 years ago when the last inhabitants moved to Gordes. (Michael Abrams / S&S) Two cats sit on a window sill in Bonnieux, France. It&#39;s not known whether the mirror at left indicates the felines&#39; vanity ... (Michael Abrams / S&S) 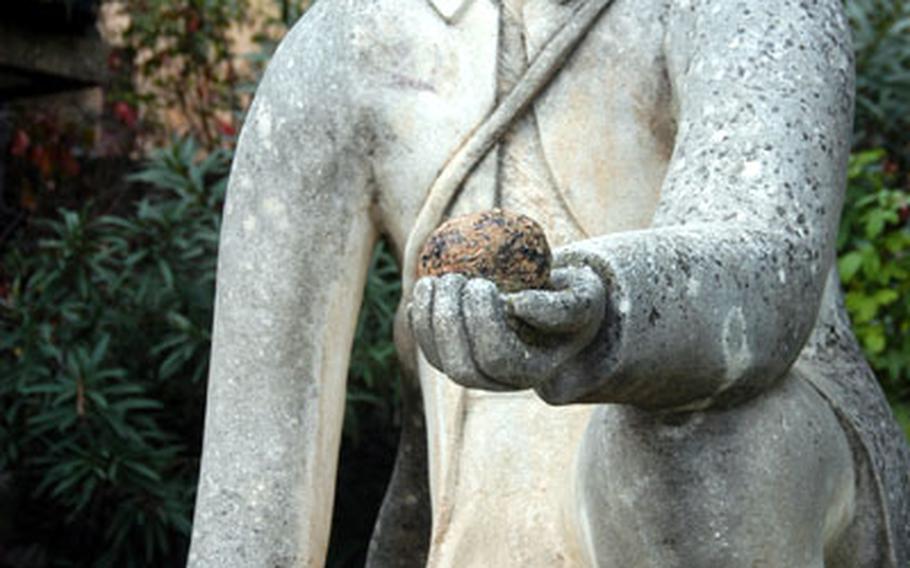 A statue in St.-Saturin-les-Apt, one of the hilltop villages of the Luberon, is dedicated to hunters of truffles, a specialty of the area. (Michael Abrams / S&S) Friends have a talk outside an art gallery in Ménerbes, France, the village made famous by author Peter Mayle&#39;s "A Year in Provence". (Michael Abrams / S&S)

It was the last full day of a week in Provence.

We had seen everything there was to see around the town we had established as our base, St. R&eacute;my. Trying to decide what to do or where to go, we leafed through the Michelin Green Guide to Provence.

One of the suggested driving tours was the &ldquo;Beautiful Villages in the Luberon,&rdquo; an 80-mile circle route along the edge of the Vaucluse plateau and the foot of the Luberon mountains.

The tour started at Cavaillon, just off Autoroute A7, a place famous for its melons and its Jewish museum and synagogue. We decided to save the city for another vacation and headed to the smaller L&rsquo;Isle-sur-la- Sorgue. The town, set on the Sorgue River, is known for the water wheels that once powered silk factories and oil mills, and for the antique shops that line the banks of the river. A cafe on the bank was also a nice place for a late-morning caf&eacute; au lait.

Refreshed, we headed through vineyards and orchards toward Gordes. Before arriving there, we followed a sign toward &ldquo;le village des bories,&rdquo; a hamlet of dry-stone huts, between 200 and 500 years old, now an open-air museum. Bories date back to the Iron Age, and dot the Luberon countryside. The houses, stalls and barns here were abandoned about 150 years ago when the last inhabitants moved to Gordes.

Coming up the road from the village, the first glimpse of Gordes is as dramatic as it gets. The town climbs the terraced hillside from deep in the valley to its crowning ch&acirc;teau. Considered one of the most beautiful hilltop villages in France, Gordes is swarmed with tourists in the summer.

We followed highway D2 to St.-Saturin-les-Apt, with a view of Roussillon and of Apt on the hillsides in the distance.

A windmill and castle ruins overlook St. Saturin, a town also known for its cherry orchards. Friendly locals sat outdoors at a cafe enjoying the warm sun. From the castle walls, there is a wonderful view over the town, the orchards and the vineyards. In town there is a statue Joseph Talon &mdash; whom the locals call the father of truffle cultivation &mdash; holding one of the expensive tubers.

From here we drove to Apt, known for its crystallized fruit, truffles, Saturday market and the Cathedral of Saint Anne.

Then it was over to Roussillon. The town was crowded with tourists, and parking places were hard to find, so we continued on to Bonnieux, passing the Roman Pont Julien on the way.

We parked near the new church in the lower town, where locals were playing a game of boule, then climbed Bonnieux&rsquo;s steep, winding, cobblestone lanes to the terrace beneath the old church for a view of Vaucluse, the Luberon and the hilltop villages of Lacoste, Gordes and Roussillon. We bought a baguette &mdash; appropriate for a town with a Mus&eacute;e de la Boulangerie (bakery museum) &mdash; to snack on as we walked back down to the car.

On the way to Lacoste, where the Marquise de Sade once ruled, there was a spot on the road with a vista of the town rising boldly above the plain ahead of us, and a sun-drenched Bonnieux behind us.

The last stop was M&eacute;nerbes, the hilltop village made famous by Peter Mayle&rsquo;s &ldquo;A Year in Provence.&rdquo; It would be hard to find a better way to end our stay.