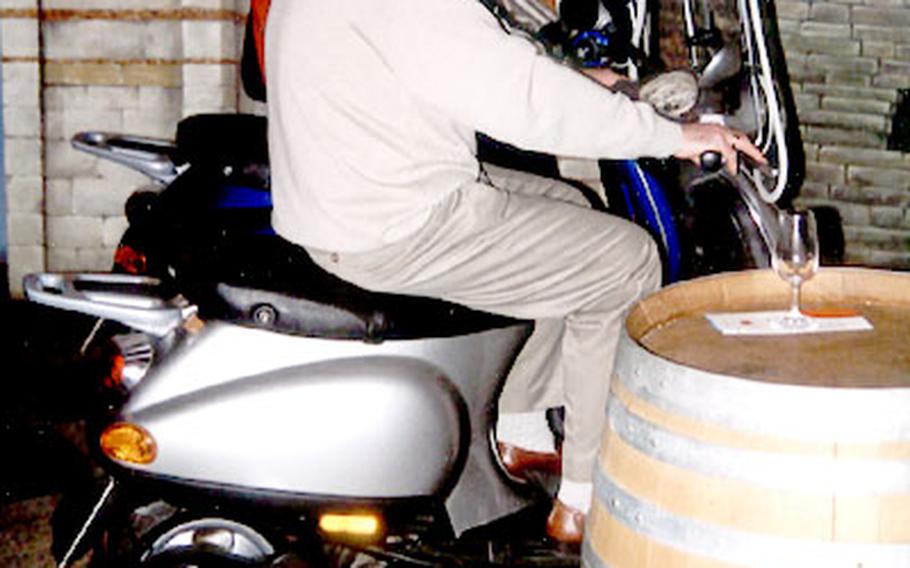 Visitors sit on Vespa scooters and listen through headphones to an explanation about wines of the Chianti region. It is one of the more novel rides at Vinopolis. (Richard Moverley / Special to S&S)

Visitors sit on Vespa scooters and listen through headphones to an explanation about wines of the Chianti region. It is one of the more novel rides at Vinopolis. (Richard Moverley / Special to S&S) 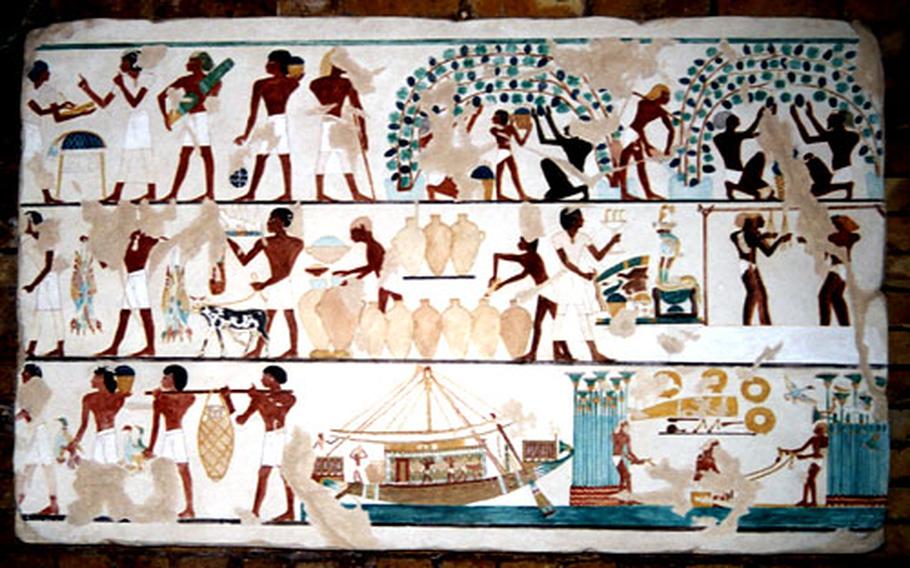 A wall painting shows winemaking in ancient Egypt in a section of Vinopolis called the Cradle of Wine. Exhibits here trace the history of winemaking. (Richard Moverley / Special to S&S)

Overlooking the Thames at Bankside in London is Vinopolis, an unusual attraction devoted entirely to wine.

The sleek, up-to-date glass frontage includes three Modernist symbols representing lips, a nose and a wine glass. And beyond, spacious galleries, housed in former wine vaults under the old brick railway arches, are dedicated to films and photos, explanations and exhibitions about the history, culture and traditions of wine and winegrowing.

The museum opened in July 1999 and, according to Shin Tsyi Yang, its marketing executive, is unique in the world.

&ldquo;The founder used to be a wine merchandiser, and traded in wines from all round the world,&rdquo; Yang said. &ldquo;His original idea was to create a place where people could enjoy themselves while learning about wine.

&ldquo;All the workers at Vinopolis are fully trained and accredited in wines and wine tasting. But we want to be a visitor attraction, not a museum. People like interaction so we&rsquo;ve included some amusing and quirky exhibits.&rdquo;

Among the &ldquo;quirky&rdquo; highlights are the Piaggio Vespa scooters that transport visitors through the Chianti region of Italy, and the mock airplane in which they can sit and watch a film about Australian wine.

But that&rsquo;s not the end of it. You can sit on the stone steps of a Roman amphitheater in the Rh&ocirc;ne region to watch a film about winegrowing in that French area, admire the workings of a bottling machine from Champagne, come face to face with a bull from Argentina or try your hand as a Hollywood film cameraman in North America.

There&rsquo;s a difference between the aims of a theme park and that of a serious museum &mdash; and Vinopolis does have difficulty achieving the balance. Despite the informative audio guide by English wine expert Oz Clarke and the chance to sample rare and unusual wines (including bottles from Thailand, India and China on my visit), the information is at times scanty and the exhibits less than riveting.

The tour starts with the London room. Here you find out that London has served as the crossroads of the wine world for more than 2,000 years &mdash; which is the justification for having the attraction here rather than in one of the world&rsquo;s more well-known wine areas.

In the next room, the Cradle of Wine, there are interesting exhibits and displays about the origins of winemaking. They include very old vine cuttings from Georgia and wall paintings from Ancient Egypt.

From there you&rsquo;re into Bordeaux and the Rh&ocirc;ne, Burgundy and Champagne in France. And then it&rsquo;s on to Portugal and Germany, Argentina and Chile and North America. Later come India and South Africa, New Zealand and Australia, Spain and Italy.

Pictures, films, music and artifacts conjure the culture and customs of each country and point to the vital relationship between the land and its wine. And there&rsquo;s even information about the health benefits of drinking wine (in case you needed an excuse).

As you make your way through the world of wine, there are tasting tables where you can exchange vouchers for samples of your choice. (Hint: Pick up a glass from the first station and carry it around with you). The most relaxing and pleasant tasting table is number 3, next to Italy. And near each table there are water dispensers to rinse your glass and your palate.

Seminars on tasting wine take place regularly in a hall near the entrance.

During one of them, the Italian wine expert (let&rsquo;s call him Roberto) told us that there are three main processes involved in tasting wine. They are: Look (preferably against a white background); smell (human beings can distinguish about 1,000 smells including floral, fruity, mineral and spicy) and taste.

&ldquo;Ideally you should keep your bottles laid down horizontally so that the cork is always kept wet,&rdquo; said Roberto.

&ldquo;Open the bottle an hour before &mdash; no matter whether it&rsquo;s red or white &mdash; to let it breathe, and swill your glass to clean the wine. When you taste the wine, take a little sip and keep the wine just behind the teeth and under the tongue. Breathe three times.&rdquo;

Toward the end of the Vinopolis tour you&rsquo;ll pass the Wharf Wine Bar, which sells snacks and rare wines, and the Bombay Sapphire Experience. This recent addition is definitely one of the highlights of the tour. Bowls of fragrant spices demonstrate the rich variety of ingredients that go into London Dry Gin, and a film explains the complex distillation process involved in making Bombay Sapphire, a high-quality gin.

Behind, in a stylish neon-lit bar, you are invited to choose a gin cocktail to sample. In contrast with the wine tasting tables, samples here are generous. And I can particularly recommend the blue curacao cocktail.

Beyond that is the optional Absinthe bar, housed in a French-style bistro, and then it&rsquo;s out to the gift shop and wine store to pick up some souvenirs.

Richard Moverley is a freelance writer living in England.

Where: Vinopolis is at 1 Bank End, London SE1 9BU. It is close to the Anchor Pub and the Golden Hinde replica and only a five-minute walk from Shakespeare&rsquo;s Globe.

When: The park is open from noon until 6 p.m. Tuesday through Thursday and Sunday, and until 9 p.m. the rest of the week.

How much: Admission prices are: Tuesday through Thursday, adults 11 pounds (about $20.50) and senior citizens 10 pounds; Friday through Monday, adults 12.50 pounds and senior citizens 11.50 pounds. Children up to 15 are admitted free and will be offered fruit juice as an alternative to wine. The Classic Tour Package includes five wine tastings, a cocktail and an audio guide. There are also also Premium and Ultimate packages, for 15 and 20 pounds, respectively, that include additional wine tastings.