London: Skip the high-priced tour and ride the city bus 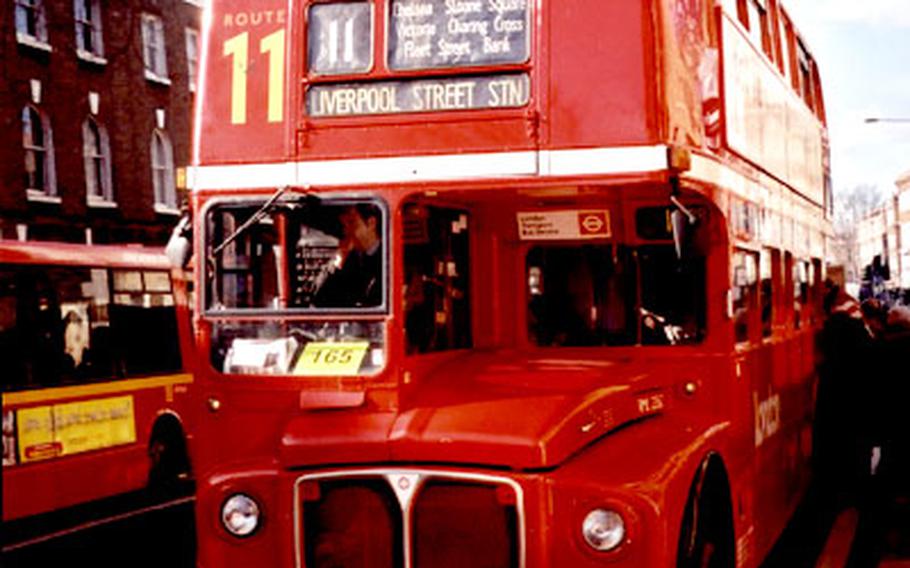 The No. 11 bus runs from Liverpool Street Station to Fullham Broadway and passes many of the city’s biggest tourist attractions and historic sites. You won’t get a guided tour as you do on private tour buses, but you will get to travel with real Londoners at a much lower price. (Dennis A. Cavagnaro / Special to S&S)

The No. 11 bus runs from Liverpool Street Station to Fullham Broadway and passes many of the city’s biggest tourist attractions and historic sites. You won’t get a guided tour as you do on private tour buses, but you will get to travel with real Londoners at a much lower price. (Dennis A. Cavagnaro / Special to S&S) 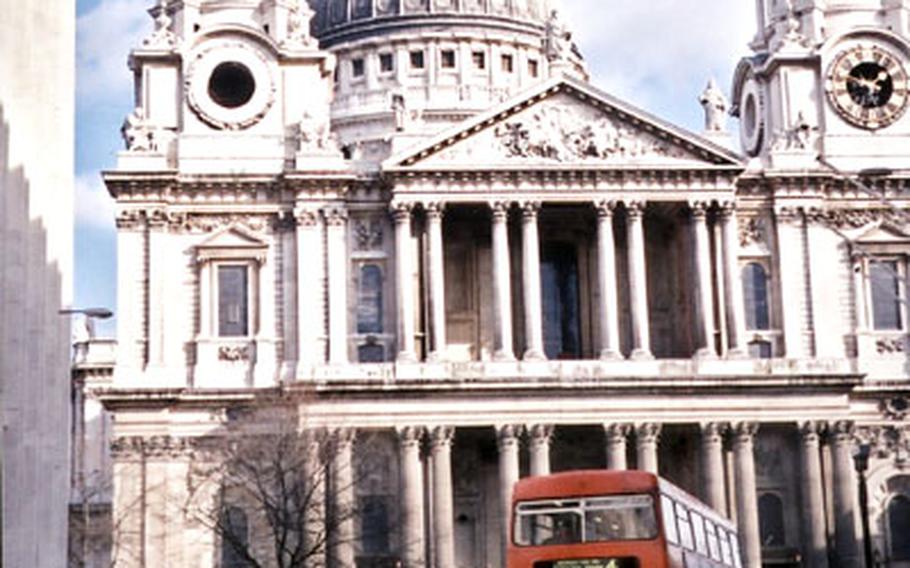 The No. 11 passes St. Paul’s Cathedral, with its great dome and symbolism. It was rebuilt after the great fire of 1666 by Christopher Wren, then an untried architect, and it withstood the German air raids of World War II. It is one of London’s most popular tourist attractions. (Dennis A. Cavagnaro / Special to S&S)

Around Piccadilly Circus, a half-dozen tour bus companies compete for visitors, hoping to show them London&rsquo;s highlights from the top of a double-decker bus. The idea is good, but a bit pricey &mdash; $20 to $30 per adult at today&rsquo;s exchange rate.

How about a low-cost alternative? Take public transportation. With a bit of knowledge and a free London bus map, you can select a bus route, jump aboard the rear platform of one of London&rsquo;s ubiquitous red buses and see the city&rsquo;s sights surrounded by real Londoners. And it will cost you less than $2.

Of all the bus routes, the one that most ties together the city&rsquo;s glories is the No. 11 from Liverpool Street Station in the City to Fulham Broadway in Chelsea. Of course, few will ever ride the No. 11 from end to end, tourists included, but if you do, you will be rewarded. The journey is far removed from predictable packaged tours.

Bring along your London guidebook and try to keep up as the famous sites go zipping by &mdash; actually you are doing the zipping, as many of the sites have remained in place since Roman times.

Let&rsquo;s start the No. 11 urban odyssey at Liverpool Street Station. The station has recently been renovated to its 19th-century glory. The cast iron grillwork is resplendent in its now-21st-century setting.

The No. 11 collects passengers on the station&rsquo;s west side. But if before boarding the bus you leap across the station &mdash; it can be done on elevated walkways &mdash; to the east side, you will find yourself across from the famous old Dirty Dick&rsquo;s pub on Middlesex Street. On Saturdays and Sundays, the street sheds its shabbiness and is transformed into a giant temporary mall of outdoor stalls, reinventing itself into the vibrant Petticoat Lane.

Past Petticoat Lane is London&rsquo;s East End, wonderfully described by Charles Dickens in &ldquo;Oliver Twist&rdquo; and other stories. It was also the haunt of Jack the Ripper. The East End still shows traces of grit, though it is fast becoming gentrified.

Departing the Liverpool Street Station, the No. 11 threads its way into Threadneedle Street and passes, on the right, the Stock Exchange established there in 1773. Until 1914 it was the world&rsquo;s biggest.

The bus passes simultaneously the Royal Exchange on the left and the Bank of England &mdash; The Old Lady of Threadneedle Street &mdash; on the right. The bank&rsquo;s exterior dates from 1694, and its museum shows the intriguing story of the bank&rsquo;s and Britain&rsquo;s financial system.

Mansion House, next on the left, is the official residence of London&rsquo;s Lord Mayor. The 1753 building has an elegant Palladian front with Corinthian columns.

Here also is the complex Bank Underground Station serving a number of tube lines &mdash; District, Circle, Central, and the shuttle to Waterloo Station. It is also the terminal for the otherwise-above-ground Docklands Light Railway, which transports visitors to a delightful tour of the East Side&rsquo;s modern transformation.

The bus crosses Bow Lane a block from St. Mary&rsquo;s-le-Bow. The Norman church, rebuilt by Christopher Wren between 1670 and 1680, was largely destroyed by German air raids in World War II and later rebuilt. Anyone born within earshot of its bells is considered a true Londoner or Cockney.

Then it is on to Cannon Street and pass St. Paul&rsquo;s Cathedral &mdash; one of the world&rsquo;s great buildings and a must stop for first-time London visitors. Built after the Great Fire of 1666, St. Paul&rsquo;s is massive and features the second largest dome in the world. It withstood World War II bombing raids and its dome and cross served as a symbol of London&rsquo;s wartime determination. It was the setting of Prince Charles&rsquo; marriage to Lady Diana and Sir Winston Churchill&rsquo;s funeral.

Just past St. Paul&rsquo;s, as the road heads downhill and changes its name to Ludgate Hill, the bus passes a block from the Old Bailey, London&rsquo;s criminal courts, the haunt of the popular but fictional Horace Rumpole &mdash; &ldquo;Rumpole of the Bailey.&rdquo; The Viaduct Tavern opposite the Bailey has one of the horrid prison cells from the infamous Newgate Prison.

Here the bus turns left, toward the River Thames and Blackfriars Station. Its route goes down hill and across the road leading to Blackfriars Bridge, which spans the Thames, then back uphill on the same street and onto Fleet Street.

In the not-too-distant past, Fleet Street was the home of London&rsquo;s and Britain&rsquo;s greatest newspapers, but most have moved to the urban renewal areas of the Docklands. St. Bride s Church, some 50 yards off Fleet Street, is the church of the press. Its octagonal spire is said to be the inspiration for the tiered wedding cake.

The 1667 Ye Old Cheshire Cheese pub is on the right. Here diarist Samuel Pepys drank, as did Dr. Samuel Johnson, Mark Twain and Charles Dickens. It&rsquo;s quite cozy, and on chilly days its many fireplaces make it a warm treasure.

Fleet Street is also Rumpole country, including the law chambers of John Mortimer, the character&rsquo;s creator. Mortimer&rsquo;s chambers, the fictional No. 3 Equity Court, is No. 1 Dr. Johnson&rsquo;s House, a typical 17th-century house. Look for the shingle.

On the left is Inner Temple Lane, a narrow alley entered from Fleet Street through Prince Henry&rsquo;s Room, a building with an upstairs tavern. It leads to the 12th-century Temple, a round church built for the Knights Templar, a chivalrous order of Crusaders. Look for the effigies of the knights in the church&rsquo;s nave.

The Temple Bar Monument in the middle of the street marks the boundary between London and the city of Westminster, and where Fleet Street becomes The Strand.

Right in the middle of the Strand are two churches, St. Clement Danes and Mary-le-Strand. St. Clement&rsquo;s, built in 1680, which has been adopted by the Royal Air Force. If you are in the area on a Saturday afternoon, you might chance upon an RAF wedding.

Just up from the Strand at Wellington Street is Covent Garden, the Royal Opera House, the London Transport Museum and the Theatre Museum. Approaching Charing Cross Station, No. 11 passes the famous restaurant, Simpson&rsquo;s on the Strand, the posh Savoy Hotel and the Savoy Theatre.

The bus crosses in front of Trafalgar Square and Nelson&rsquo;s Column. On the return trip from Chelsea, it will circle Trafalgar Square passing in front of the National Gallery &mdash; and a George Washington statue &mdash; and St. Martin&rsquo;s in the Fields. This church has an inexpensive restaurant in its crypt and is famous for its free lunchtime concerts and its not-so-free evening concerts. Just up from the church is The West End, the locale of many of London&rsquo;s top theaters.

As the No. 11 forges ahead it appears to be headed through Admiralty Arch, but at the last moment veers to the left to roll down Whitehall. It passes the Horse Guards, where you&rsquo;ll see the mounted sentries with their magnificent plumed helmets, red tunics and shiny boots, and Downing Street, the official home of the British prime minister. In the middle of the street is the be-flagged Cenotaph dedicated to the dead of World War I.

On No. 11&rsquo;s eastbound trip the bus will circle Parliament Square, a green adorned with statues of Sir Winston Churchill and, surprisingly, Abraham Lincoln. On the left is Big Ben, the famous pinnacled clock tower of the Houses of Parliament. Here, members of the House of Commons and the House of Lords sit, debate and produce legislation for the country.

Just across from the Houses&rsquo; St. Stephen&rsquo;s Gate is St. Margaret&rsquo;s Church, where many years ago, Churchill claimed Clementine Dozier as his bride. On Saturdays at 4 p.m., you often can view a posh society wedding with wide-brimmed hats, gray morning coats and a line of polished Rolls Royces ready to whisk away the bride and groom.

The No. 11 then bends around Victoria Station, turns left down Buckingham Palace Road and right onto Pimlico Road, passing the 1682 Wren-designed Chelsea Royal Hospital. Note the military pensioners in their bright red tunics.

Next on the route are Sloane Street and then Sloane Square at the head of King&rsquo;s Road, Chelsea. King&rsquo;s Road was the birthplace of the mini-skirt in the 1960s and punk in the &rsquo;70s, which makes it one of the most trend-setting streets in the world.

It is still fashionable and lively with boutiques, shops and stores mixed with pubs, caf&eacute;s and restaurants. It is also an antique lover&rsquo;s paradise. In the 17th century, King&rsquo;s Road was Charles II&rsquo;s private carriage road to Hampton Court.

Just off King&rsquo;s Road the No. 11 finds its terminus at the Fulham Broadway Underground Station. After a pause, it will again push off to retrace its steps back across London &mdash; and through London history &mdash; to Liverpool Street Station.

Dennis Cavagnaro is a retired Marine and freelance writer now living in California.

How to be a bus-savvy traveler ...

The one-way trip on the London Transport&rsquo;s No. 11 bus averages one hour and costs 1 pound &mdash; about $1.62 &mdash; for adults and 40 pence for children. The bus line has 38 stops.

Other London bus lines that serve many of London&rsquo;s tourist sights include:

No. 19, which bisects the city from northeast to southwest, from Finsbury Park to Howie Street, Battersea. In between are Sadler&rsquo;s Wells at Rosebury Avenue, Bloomsbury, Charing Cross Road, Green Park, Hyde Park Corner, Knightsbridge, Kings Road and the Thames.

No. 100 passes through the Barbican, by Wapping, the Tower of London, Tower Bridge and the City of London Museum.