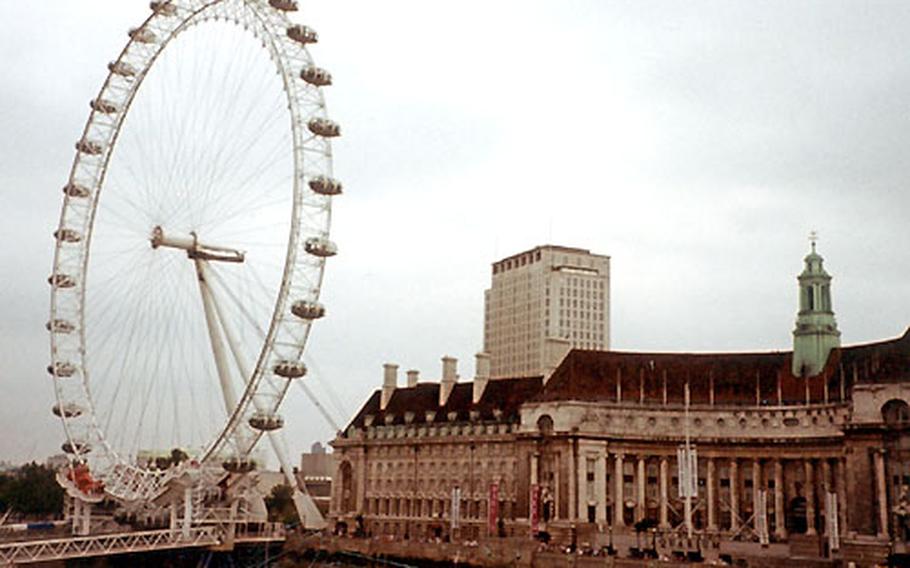 The London Eye, created for the millennium and now London’s top tourist attraction, towers amid a newly developed area of museums, a river cruise and eateries. Several London Tube lines have stops within a five-minute walk of the Eye, and most sight-seeing buses stop there. (Deborah Absher / S&S)

The London Eye, created for the millennium and now London’s top tourist attraction, towers amid a newly developed area of museums, a river cruise and eateries. Several London Tube lines have stops within a five-minute walk of the Eye, and most sight-seeing buses stop there. (Deborah Absher / S&S) 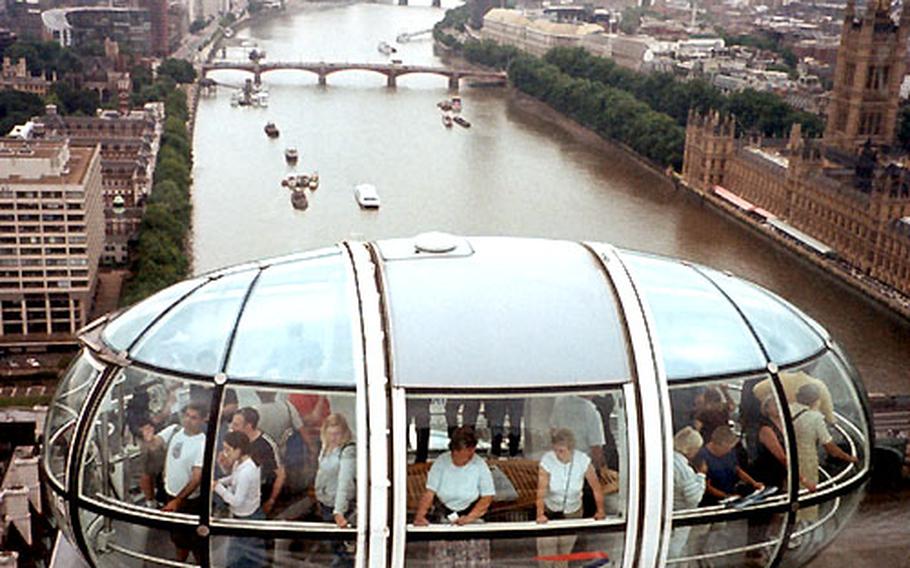 Passengers on the London Eye look out at the city as their observation capsule rises above the River Thames. In the background to the right are the Houses of Parliament and the tower of Big Ben. (Deborah Absher / S&S) 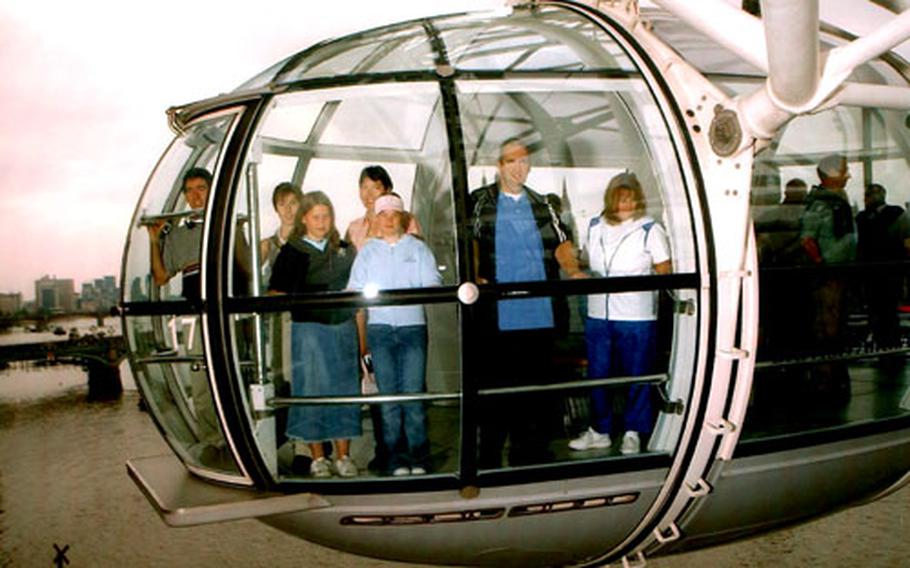 An automatic camera mounted on the Eye near the end of the ride snapped this picture of passengers for a souvenir photo that can be purchased. (Photo courtesy of London Eye) 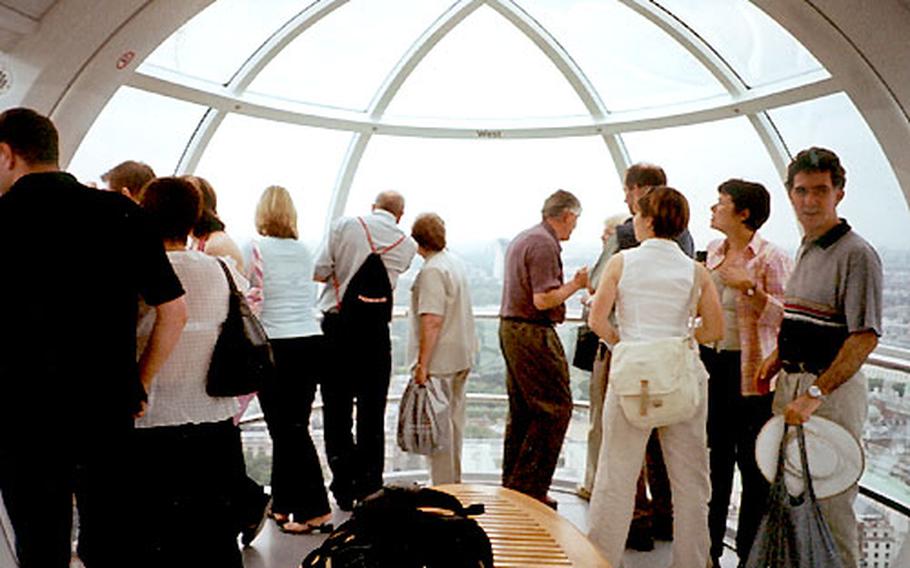 As many as 25 people can comfortably fit into one climate-controlled glass capsule on the London Eye, with room to move about and take photos from all directions. A bench in the center provides seating. (Deborah Absher / S&S) 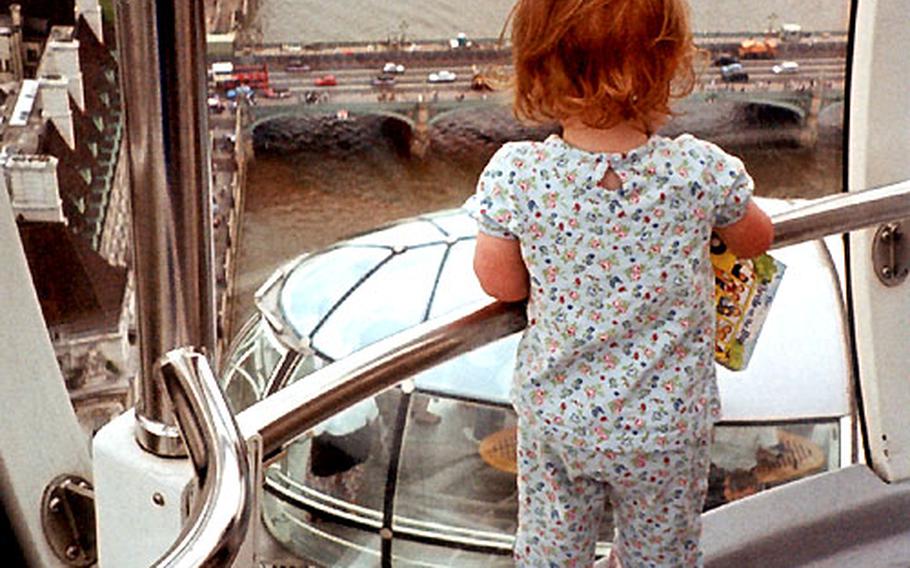 A toddler watches another capsule as it rises into view. The Eye moves so slowly and smoothly that children — and those with motion sickness — don’t seem to be bothered by it. (Deborah Absher / S&S)

On two previous visits to London, I had intended to go to the London Eye. Not to actually ride the world&rsquo;s tallest observation wheel and experience the world&rsquo;s worst motion sickness, but just to see what has become London&rsquo;s top tourist attraction.

This time I went. And, thankfully, even though I decided to go along for the ride, I had no need for a barf bag because the wheel turns so slowly &mdash; about 1 foot per second &mdash; that the movement is almost imperceptible.

It&rsquo;s a misnomer to call the London Eye a Ferris wheel because the only similarity between the two is that the Eye is a big wheel that takes people for rides. It was designed to mark the millennium (though technical delays pushed its planned New Year&rsquo;s Eve debut into March 2000) and is still sometimes referred to as the Millennium Wheel.

However, its official name is the British Airways London Eye because the airline paid the most toward its cost among the three private partners. Therefore, it&rsquo;s not called a ride, but a &ldquo;flight.&rdquo;

Ignore that, and it&rsquo;s a flight of fancy.

The wheel was initially approved for a five-year run, but its popularity persuaded the Permanent Planning Commission last year to grant it another 20 years, said Annabel Gunnell, a spokeswoman for the Eye. In its first year, it attracted 3.3 million riders, surpassing estimates that it would draw 2.4 million. In 2001, it had 3.85 million riders and 4 million last year.

&ldquo;Oh, we fully expect it to be here,&rdquo; Gunnell said. &ldquo;It&rsquo;s kind of like the Eiffel Tower in Paris, which was due to stand for a year to usher in the new century after the International Exposition in 1899 and is still there.&rdquo;

The Eye is London&rsquo;s No. 1 paid tourist attraction. Some other attractions, such as museums, attract more people, but many of those are free, Gunnell said. Still, its passenger numbers alone put the Eye into the Top 5 list of tourist favorites, including the Tower of London, Madame Tussaud&rsquo;s wax museum, the Tate museum and the National History Museum, she said.

One of the differences between the Eye and a Ferris wheel is its height. At 450 feet, the Eye is twice as tall as the giant 1897 Ferris wheel at Prater park in Vienna. And instead of open carts with a bar to hang on to, the Eye has 32 egg-shaped, climate-controlled glass capsules capable of comfortably holding 25 people with room to walk and gawk.

Another difference is that the ride never stops. It doesn&rsquo;t load everyone up and then take a couple whirls, as I had expected. It moves slowly enough that riders can smoothly embark and disembark as it makes a complete revolution every 27 minutes, carrying up to 800 people at a time, or 1,600 people an hour, or 20,000 people per day. This is what keeps the lines moving.

Usually I will avoid sights such as this because of the lines. So as I scoped things out, I asked an employee how long the wait was. I was skeptical when she peered out the window of the ticket sales office and chirped, &ldquo;You&rsquo;ll get on straight away!&rdquo;

But she was right. The ticket sales office, in a building called County Hall at the base of the Eye, was stunningly efficient. I waited less than 10 minutes to buy a ticket even though the line snaked out the door. If lines are extremely long, you&rsquo;ll be assigned a half-hour time frame for your ride, or you can schedule a time later in the day.

With ticket in hand, riders are funneled through the doors to join the queue, which winds around those metal herding poles (think Disneyland).

This was where I expected to come to a halt. Obviously, others did, too, because some people had brought muffins and coffee for the wait, only to find themselves gobbling and gulping to finish since the line moved rapidly.

As a capsule glided to the loading area, employees hustled people in. I lingered to take some photos and was nicely told to hurry up and get on as the capsule started rising above the platform. This is not the place to dally, though there is no need to panic as there is sufficient time to enter the slow-moving capsule. And if you do miss getting on your designated capsule, you can always take the next one.

Once aloft, I better understood the name London Eye. It boasts that on a clear day you can see for 25 miles, all the way to Windsor Castle and Heathrow Airport. But how often does London have that clear of a day? Still, even on a cloudy day, riders can get a good bird&rsquo;s-eye view of some of the major sights of London. If you want to know what you&rsquo;re looking at, spend a few dollars and buy a photographic card that shows you what&rsquo;s what.

From the Eye, viewers can actually see 55 of London&rsquo;s key landmarks, said Gunnell.

&ldquo;It offers the first-time visitor to London a chance to see the city from a different angle. It&rsquo;s a great introduction to London,&rdquo; she said. &ldquo;It gives you a sense of the scope and diversity of the city.&rdquo;

The capsule itself is unique, with 360-degree views. A wooden bench sits in the middle, but most people prefer to walk around and look from all the sides and angles. A maximum of 25 people are put into a capsule, which allows enough room for people to walk about without having to stand three-deep to look out. And because the ride moves so slowly, there&rsquo;s plenty of time to take photos from all angles.

The Eye offers various luxury packages for those who want to sip champagne during the flight or want to reserve a capsule for a group. It&rsquo;s even available for weddings.

&ldquo;We&rsquo;ve had 65 civil weddings on the Eye,&rdquo; Gunnell said, adding that several reception rooms are available in the County Hall next door and the river cruise also can be reserved for receptions.

&ldquo;It&rsquo;s loads of fun,&rdquo; she said.

If you want a souvenir of your ride on the Eye, not to worry. Near the end of the ride, a public announcement inside the capsule notifies riders that a camera will automatically photograph the capsule on the northeast side, and if you want to be in the photo, congregate there.

The photos are actually quite good and are taken close enough to recognize people in the capsule, with the river in the background.

After you unload and exit down the ramp, the photo stand is right there to capture your attention, with the photos projected overhead so you can view them and decide whether to plunk down another 7 pounds to remember your London flight.

Maybe the Eye should be renamed the Wheel of Fortune.

&para; Location: The British Airways London Eye is on the south bank of the River Thames, across the bridge from Big Ben and Parliament.

&para; By Tube: Take the Bakerloo line to Waterloo Station. Take Exit 6 for the south bank. You&rsquo;ll see the London Eye after you emerge and start across the bridgeway. It&rsquo;s a five-minute walk. Or take the Circle line to Westminster Station, take Exit 1 Westminster and walk across the Thames bridge to the south bank. The Eye dominates the skyline, so you can&rsquo;t miss it.

&para; By bus: Buses to the London Eye include the ones numbered 11, 24 and 211. Most of the sight-seeing bus tours also stop here.

&para; Hours: Generally 9:30 a.m. to 8 p.m. Exceptions: In June, closing is 9 p.m. weekdays and 10 p.m. weekends. In July and August, closing is 10 p.m. daily. Riders must be there a half-hour before closing. Does not operate Christmas Day and most of January for maintenance.

&para; Bookings: If the line looks too long, book a guaranteed time at the ticket window. Then arrive 30 minutes prior.

&para; Extra offerings: Ride the Eye and then take a 45-minute River Thames cruise that leaves from the pier by the Eye and glides to the Tower of London with what an Eye spokeswoman calls &ldquo;a really informative and funny host.&rdquo; Cost is 20 pounds (about $33.60) for adults; 19 for seniors; 10.50 for children; and free for kids under 5.

Or you can get a ticket that gives you a ride plus fast-track entry (meaning a 15-minute wait instead of two hours) to Madame Tussaud&rsquo;s wax museum and the London Planetarium. Cost is 25 pounds (about $42) for adults, 22 pounds for seniors, 16.50 for children and free for under 5. Normal admission to Madame Tussaud&rsquo;s ranges from 13 pounds to 20 pounds for adults, depending on season and time of day.