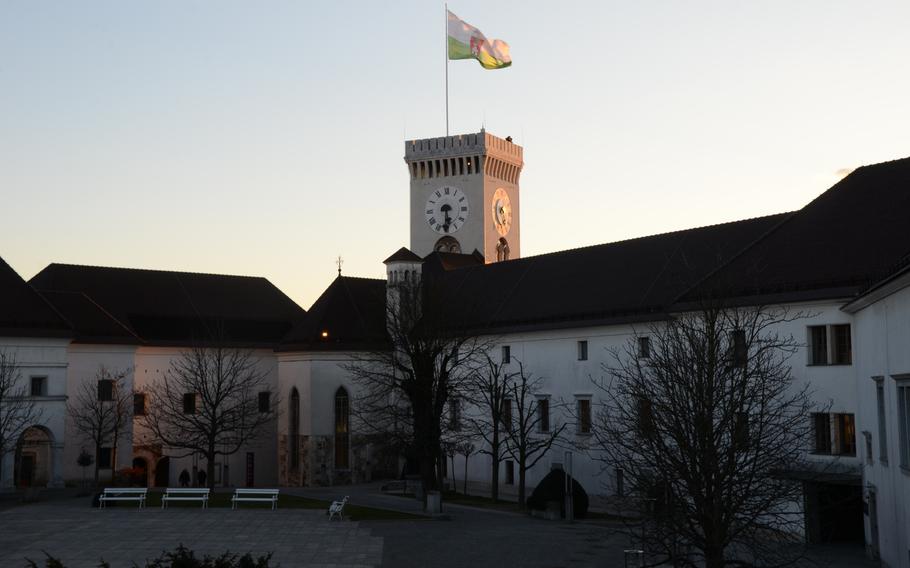 Buy Photo
Visitors atop Ljubljana Castle's tower enjoy a view of the sun as it sets over Slovenia's capital. (Jason Duhr/Stars and Stripes)

Buy Photo
Visitors atop Ljubljana Castle's tower enjoy a view of the sun as it sets over Slovenia's capital. (Jason Duhr/Stars and Stripes) 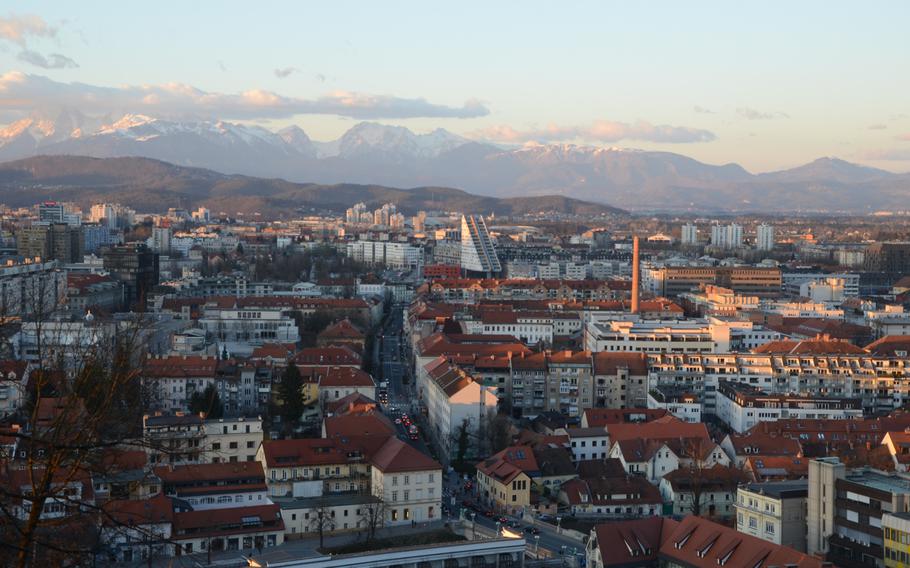 Buy Photo
A perfect view of the capital of Slovenia can be found from within the walls of Ljubljana Castle. (Jason Duhr/Stars and Stripes) 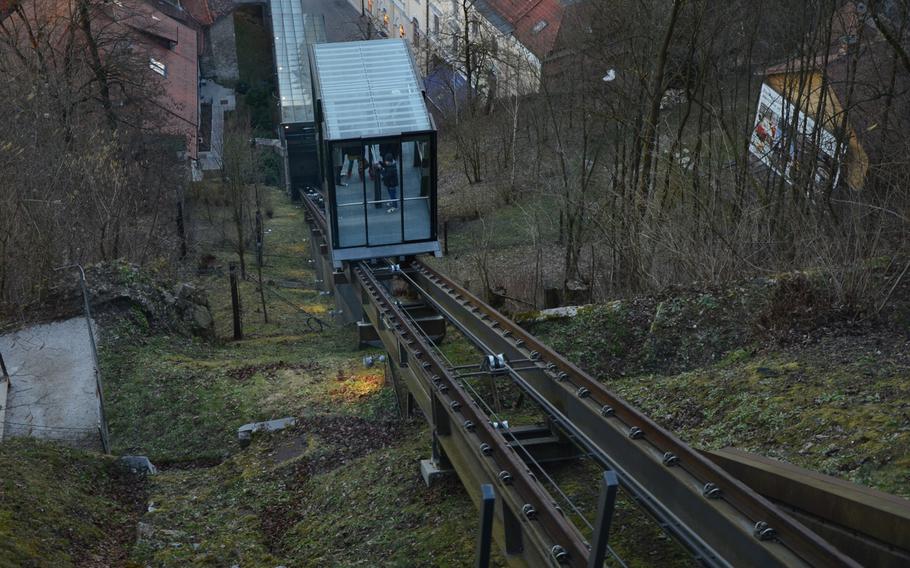 Buy Photo
The funicular is a great way to catch a quick ride up to the the castle in Ljubljana, Slovenia. (Jason Duhr/Stars and Stripes) 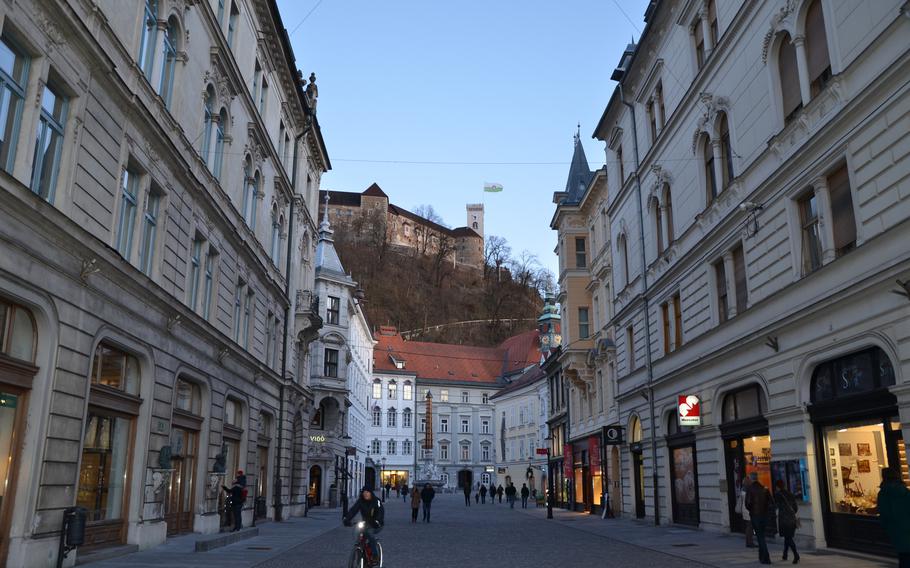 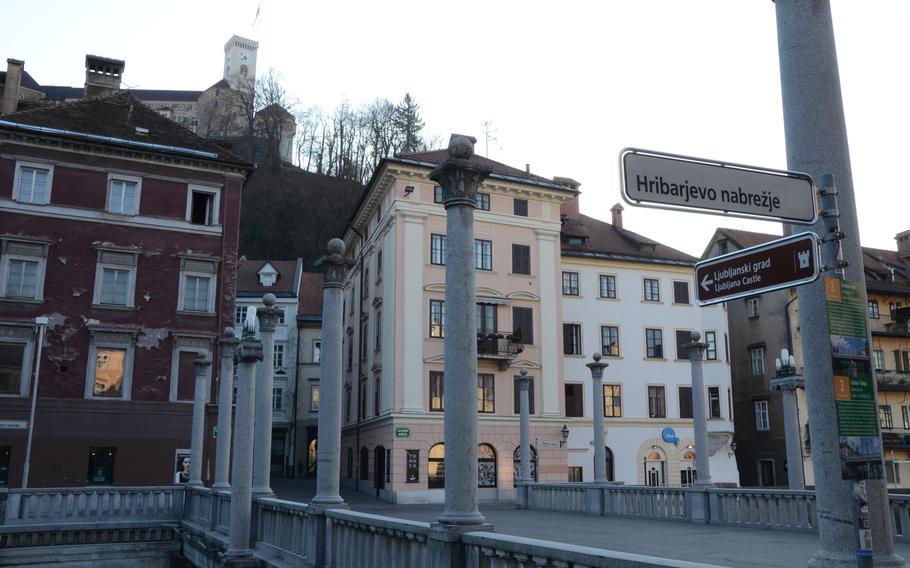 Buy Photo
Brown street signs, such as the one posted here near the Cobbler's Bridge in the central part of Ljubljana, Slovenia, will lead you to the city's castle. (Jason Duhr/Stars and Stripes) 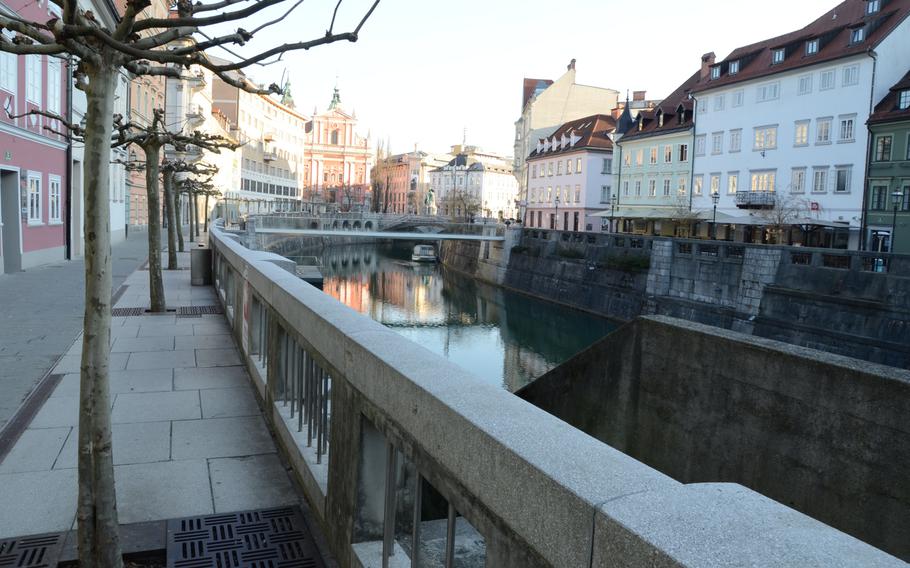 Buy Photo
The Ljubljanica River flows through the central part of Ljubljana, the capital of Slovenia. (Jason Duhr/Stars and Stripes) 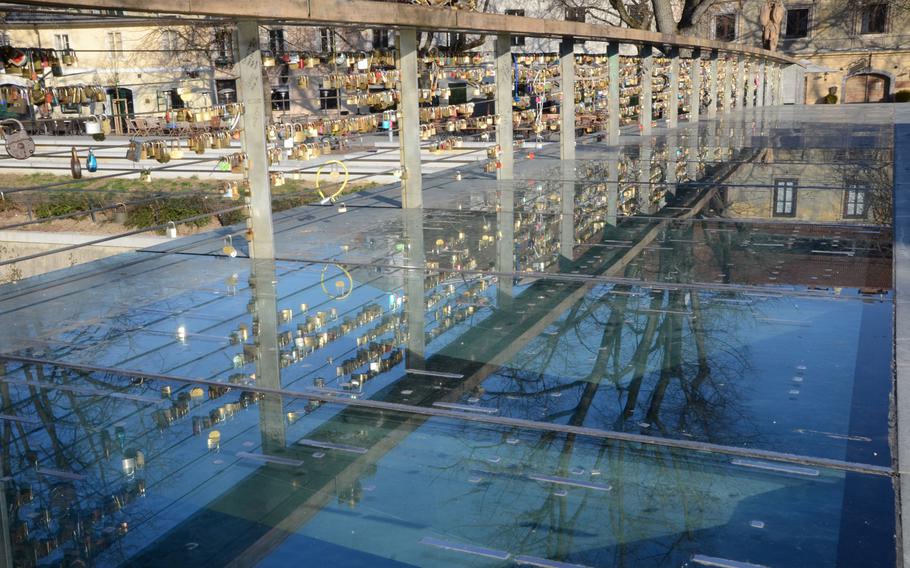 Buy Photo
One of many bridges crossing the Ljubljanica River in Ljubljana, Slovenia, the Butcher's Bridge boasts clear panels to view the river below. (Jason Duhr/Stars and Stripes) 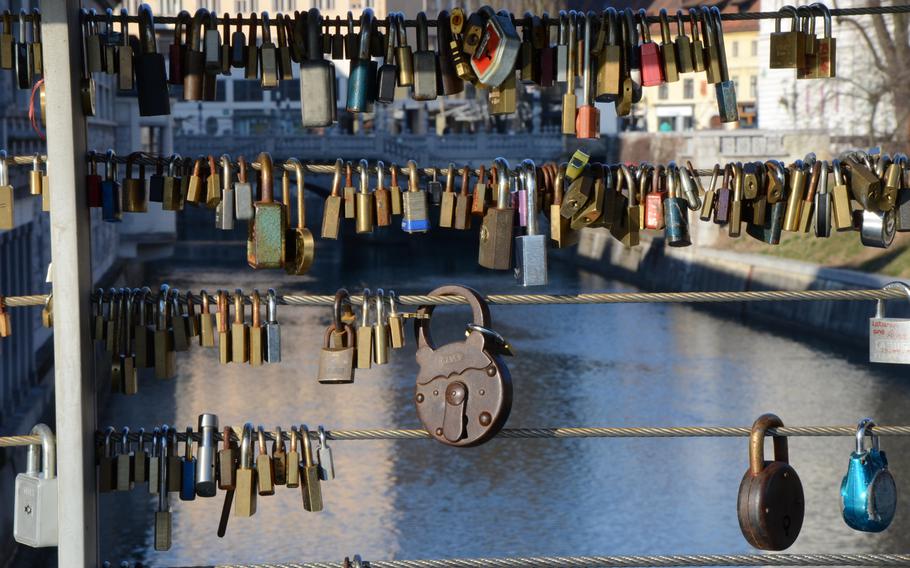 Buy Photo
A variety of locks surround cables on the Butcher's Bridge, which spans the Ljubljanica River in Ljubljana, Slovenia. (Jason Duhr/Stars and Stripes) 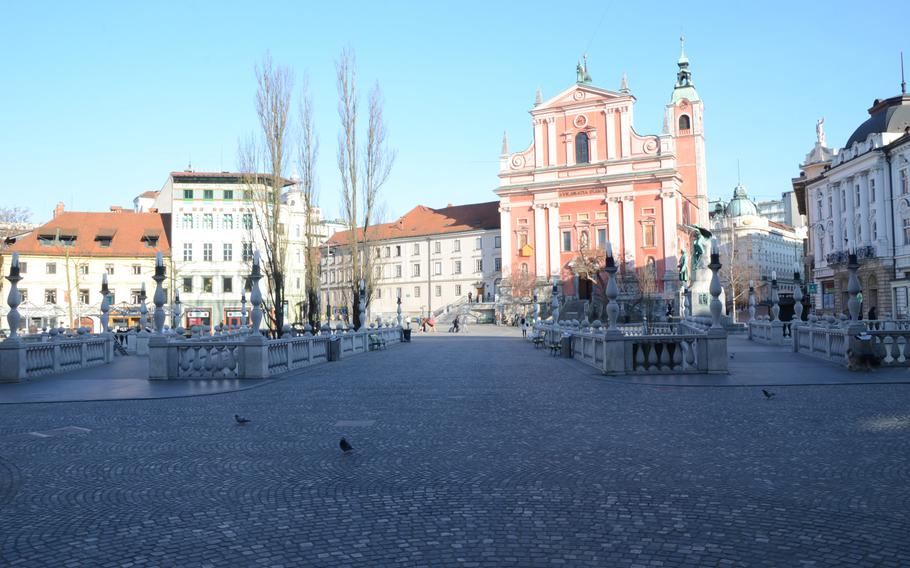 Buy Photo
Sunlight covers the Preseren Square in Ljubljana, Slovenia, while the shadows from nearby buildings cover the Triple Bridge, known for its three pathways. (Jason Duhr/Stars and Stripes) 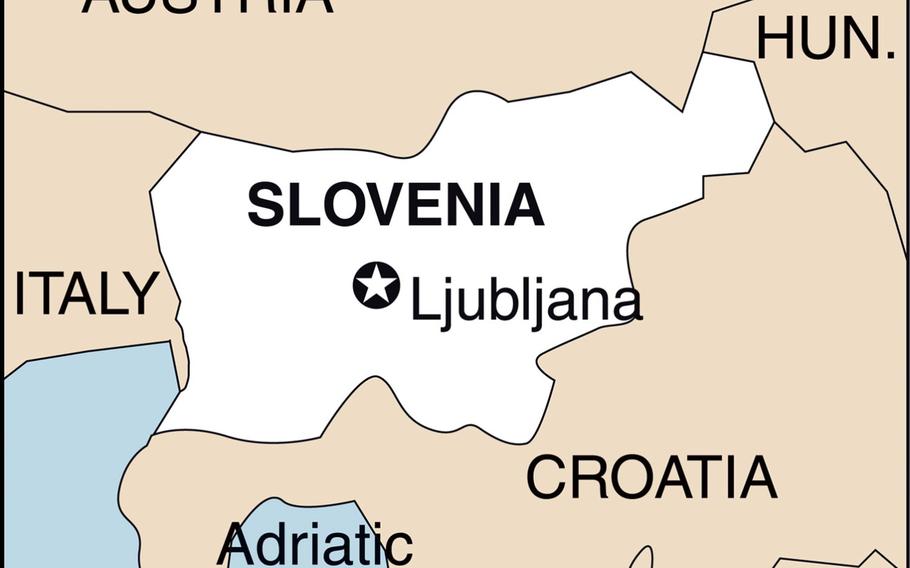 Whether viewed from the castle tower or from the streets and walkways that hug the Ljubljanica River below, the capital of Slovenia is a visual treat.

A whole day can be spent exploring some of Ljubljana’s most impressive features — its 17 bridges.

The city is well-known for its bridges, and several connect the old town and the newer parts of the city from the river that divides them.

One of the more beautiful is the Triple Bridge, comprising three walkways that allow adventure seekers to cross over to the old town’s Preseren Square, the city’s main gathering place.

The square is situated among beautifully constructed 20th-century buildings. In the middle is a statue of Slovenian poet France Preseren.

Head east down the river to what probably is the city’s most popular and eclectic crossing, the Dragon Bridge.

Green dragons sit at each corner of the bridge, which was constructed in 1901 over the original wooden bridge, built in 1819.

Against the backdrop of the castle and the pillars and dome of the nearby Cathedral of St. Nicholas, the dragons create a magical scene, even though the bridge is used for motorized traffic.

The many other bridges serve mainly pedestrians; each has a particular feature that distinguishes it from the others. For example, the Butcher’s Bridge is lined with glass walkways that give a view of the river below. The support cables are decorated with padlocks placed there by visitors.

The riverbanks on Saturdays are dramatically different than on Sundays.

Every day but Sundays, you can venture through the stalls and stands of the central market, which offer fruits, vegetables, fish and many other delights.

On Sundays, from 8 a.m. to 1 p.m., the banks turn into a flea market, with vendors lining the river, starting at the Cobbler’s Bridge, which is fashioned with pillars and lamps. Sometimes referred to as the Shoemakers’ Bridge, it was named for the shoemakers whose booths once occupied the bridge.

The vendors line up behind more than a dozen tables. Among all the wares, you might find a piece of history worth holding on to or a knickknack you can’t live without, from beautiful paintings to a ship’s wheel.

Your exploration shouldn’t stop there. On a hilltop not far from the river, Ljubljana Castle defends the city.

Depending on your aversion to heights, two methods can be used to get there: Walk through the streets of the old town, or take the funicular up the hill. Pulled by a cable on a set of rails, the funicular car offers 360-degree views of the city.

Visit the prison cells inside the castle or take in the astounding view from the castle’s clock tower or terrace.

No matter how you decide to see Ljubljana, the two-hour trip from Aviano, Italy, is well worth it.

Times: Opening and closing times vary depending on the month, but the castle and funicular are open daily.

Costs: Price for castle and funicular ride is 8 euros for adults, 5 euros for children 7-18, and 21 euros for families. Parking along the river costs 1.20 euros per hour during the week, 7 a.m. to 7 p.m. Depending on where you get on the autostrada you’ll be required to pay one toll. The vignette price for a car, valid for one week, is 15 euros when you enter Slovenia. Weekend parking is free along the river in designated parking spots.

Food: There are plenty of dining choices along the river. There is one restaurant located in the castle.